Mapping the World at Your Dinner Table

Scribbled on the Back of a Napkin: A medieval mappa mundi from 12th century London. Image by WIKI COMMONS 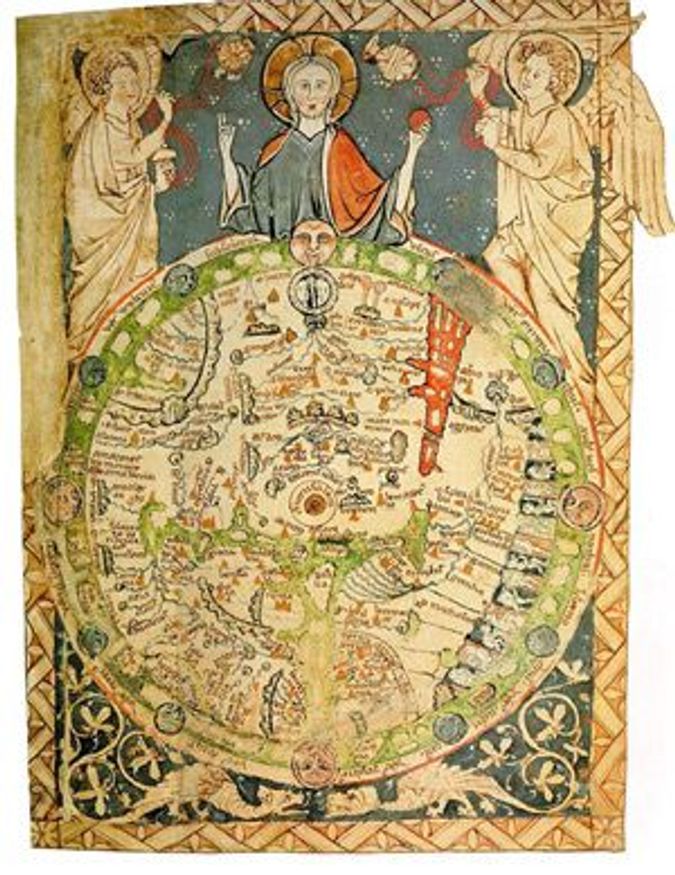 Scribbled on the Back of a Napkin: A medieval mappa mundi from 12th century London. Image by WIKI COMMONS

“The Hebrew word for tablecloth is mapa. This sounds a lot like the English word map, which according to my dictionary is derived from Latin mappa mundi, that is, ‘a sheet of the world.’ Is it possible that Hebrew mapa derives from the Latin word for sheet?”

Possible? Definitely — but this is a story with a twist to it.

Our English “map” indeed comes from medieval Latin mappa mundi, since maps in medieval Europe were drawn on sheets of linen, papyrus paper or vellum. Yet mappa came to mean “sheet” only in late Roman times; Alexander Souter’s Glossary of Later Latin to 600 A.D. dates this meaning to the fourth or fifth century. In earlier, classical Latin, a mappa was a linen napkin. The second-century satirical poet Juvenal, for example, called the chariot races of the Megalesian games held every year in Rome in honor of the goddess Cybele, the “starting gun” of which was the dropping of a napkin by an umpire, Megalesiacae spectacula mappae Idaeum, “the Idaean rite [Cybele was associated with Mount Ida in Crete] of the Megalesian napkin.” (Our English word “napkin,” by the way, comes from French nappe, which in turn comes from Latin mappa, plus the diminutive English suffix “-kin.”)

And now let’s look at our Jewish sources. In classical rabbinic Hebrew, a mapa (with the stress on the second syllable) is a napkin, too. We find the word in many places, the most amusing of which is in a discussion in the Talmud of the minimum amount of food that must be consumed in order to qualify for saying the blessing for eating in a holiday sukkah. Reminiscing about the figure of the ascetic Mishnaic sage Rabbi Tsadok — who ate so little that it was said he would ask for a fresh fig when hungry, suck its juice and throw away the rest — the Talmud tells us that even on the holiday, he allowed himself less than an “egg’s worth” of food, which was given to him in a napkin (mapa) that he carried outside the sukkah and ate there, since it did not amount to the required minimum for a blessing.

In medieval Hebrew, mapa came to mean a tablecloth, just as did French nappe. (Hence, the diminutive “-kin,” which turned an enlarged cloth back into a small one.) And in the mid-19th century, Hebrew followed the languages of Europe once more, by assigning to mapa the additional meaning of “map.”

So far, it all seems clear. But here’s the twist. When I looked up mappa in my Cassell’s Latin Dictionary, I found it defined as “(a Punic word) a table-napkin.” “Punic” is another word for Phoenician — or rather, for the language and culture of the Phoenicians, the coastal dwellers of Lebanon who settled in North Africa and founded the city of Carthage, which for centuries was the Romans’ main rival until destroyed by them in 146 BCE. Yet even afterward, Punic, a Semitic language closely akin to Hebrew, continued to be spoken in the cities of North Africa until Latin eventually replaced it.

What made Cassell’s think mappa was originally Punic? The answer to this came from Eliezer Ben-Yehuda’s 14-volume Milon ha-Safa ha-Ivrit ha-Yeshana v’ha-ḥadasha (Dictionary of the Ancient and Modern Hebrew Language), which despite being 100 years old, is the nearest thing Hebrew has to the Oxford English Dictionary. In his entry for mapa, Ben-Yehuda has this note: “This was said to be a Punic word by Quintilian, who wrote: Et mappam circo quoque usitatum nomen Poeni sibi vindicant. In other words, it is pure Semitic.”

Quintilian was a Spanish-born, first-century C.E. Roman rhetorician and author, and Ben-Yehuda quotes him as saying that the Phoenicians claimed the “familiar word mappa” was their own. No doubt he had encountered Punic speakers in Rome or his native Spain and been told as much by them — and if this was the case, Ben-Yehuda implies, Hebrew didn’t have to borrow mappa from Latin, because the word was already part of Hebrew’s Semitic vocabulary and the Romans were its borrowers rather than its lenders.

Quintilian’s remark, however, is not quite the proof of mappa’s Semitic origins that Ben-Yehuda took it to be. After all, although the Punic speakers encountered by Quintilian knew mappa as a word in their own language, in which presumably it meant “napkin,” too, neither they nor Quintilian could have had any way of proving that the Romans borrowed it from them. It could just as well have happened the other way around, with Punic borrowing mappa at some point from Latin.

We have here an issue, similar to the one that arose in last week’s discussion of Yiddish feygele and American “fag,” of who or what came first. Yet last week, we were dealing with a 20th-century problem that had the documentation needed to solve it. In the case of mappa, we can only speculate about long ago, with no evidence outside of Quintilian. He’s not enough, and the question remains unanswered.

Mapping the World at Your Dinner Table