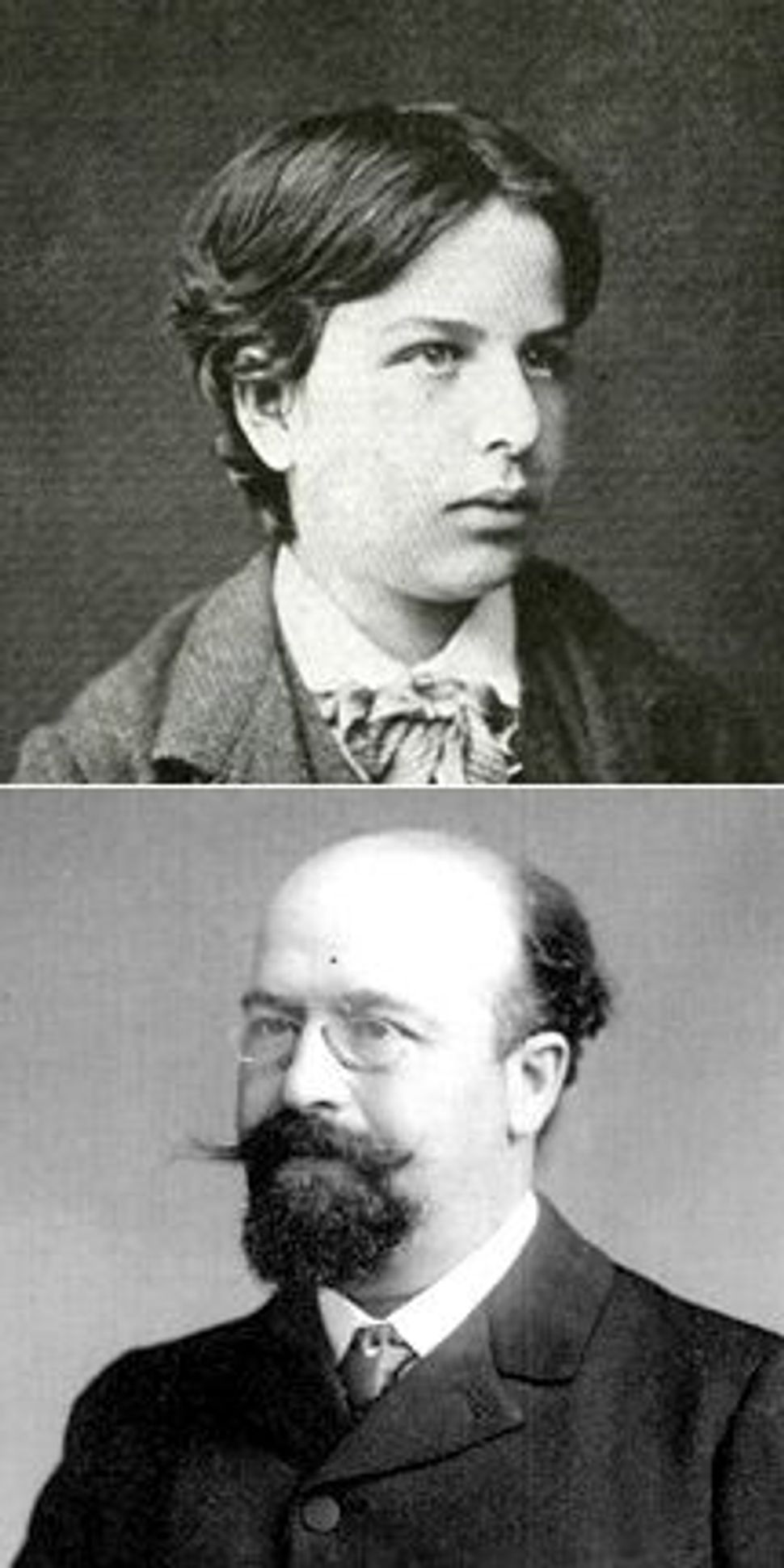 Unduly Neglected: Marcel (Mayer André) Schwob (top as an adolescent) and Bernard Lazare (bottom) are only now being recognized for their true worth. Image by BRIGHAM YOUNG UNIV. / WIKI COMMONS

In the 19th century, realist authors like Emile Zola and Anatole France were widely worshipped, but literary Symbolism, with its rejection of everyday realism, and prizing of spirituality, also attracted many European Jewish writers. Particularly in France, there appeared a wave of Jewish Symbolists who had social and political activism that was allied with dreamlike literary fantasies. These contributions by writers like Bernard Lazare and Marcel Schwob are being celebrated only now, with new editions and reprints.

Fiercely polemic works like “How To Condemn an Innocent Man” (“Comment on Condamne un Innocent,” 1898) and “Anti-Semitism and Revolution” (“Antisémitisme et Révolution,” Stock Editeur Paris,1899), by French-Jewish journalist and critic Lazare, placed him as a pioneering righteous “Dreyfusard” during the notorious Dreyfus Affair.

Lazare’s short-story collection “The Mirror of Legends” (“Le Miroir des Légendes,” 1892) was recently reprinted in a volume that also includes another story collection, “The King in the Golden Mask,” (“Le Roi au Masque d’or”) by Schwob, a French-Jewish writer generally celebrated (or dismissed) as a bookish aesthete. It turns out that Lazare was more of a Symbolist and Schwob more of a politically aware activist than was previously thought by admirers of either writer.

Also featured in the same collection — “Symbolist Tales” (“Contes Symbolistes,” Volume 1, from Ellug) — is Lazare’s 1891 story “Dying Minds” (“L’Agonie des Esprits”). It features a wise old rabbi named Iéchiel who, as Bertrand Vibert, the editor of “Symbolist Tales,” explains, is a transparent portrait of the Symbolist poet Stéphane Mallarmé. Like Mallarmé, Iéchiel hosts a salon for his disciples, and “accompanies each one to the doorway” when he departs. By transforming Mallarmé, a lapsed Catholic in real life, into an esteemed rabbi, Lazare made a significant appropriation for Jewish culture in literary Paris, where the notoriously antisemitic “Jewish France” (“La France Juive” 1886) by [Edouard Drumont]( (http://en.wikipedia.org/wiki/Edouard_Drumont ‘Edouard Drumont’) had appeared not long before, claiming that France was ruled by Jews. 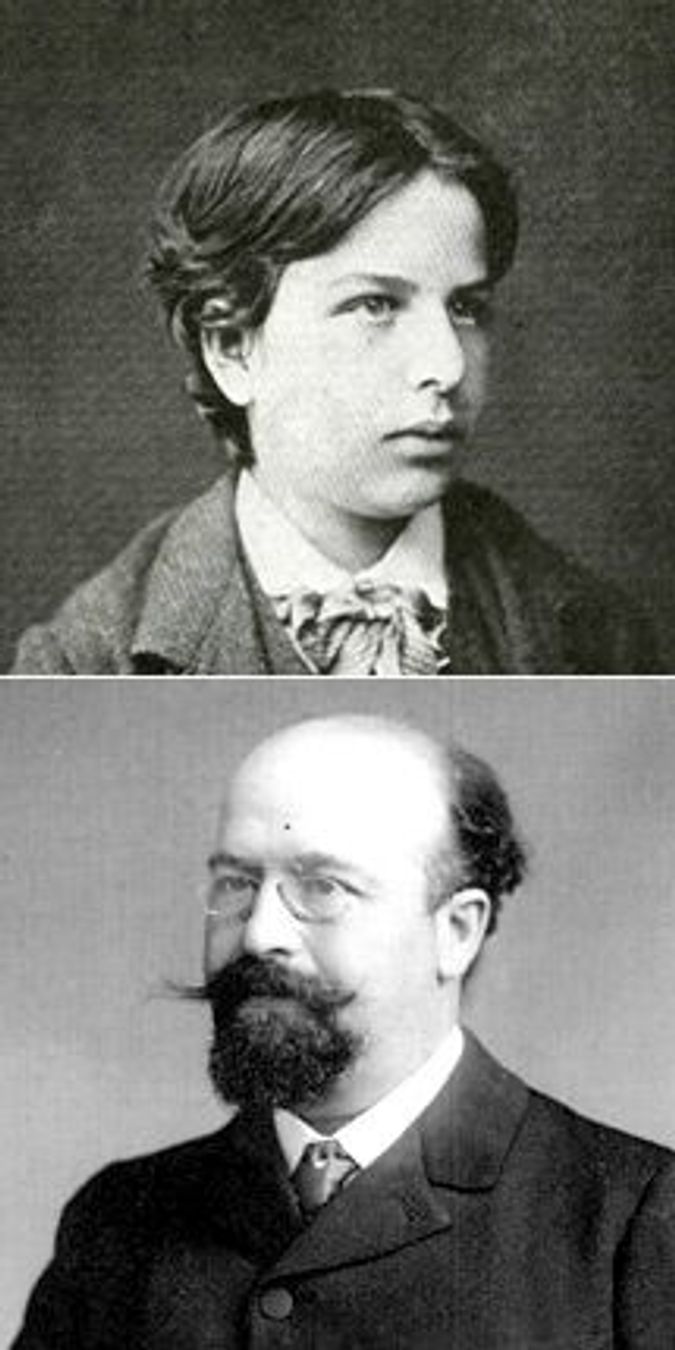 Unduly Neglected: Marcel (Mayer André) Schwob (top as an adolescent) and Bernard Lazare (bottom) are only now being recognized for their true worth. Image by BRIGHAM YOUNG UNIV. / WIKI COMMONS

As we learn in Rosemary Lloyd’s intriguing “Mallarmé: The Poet and His Circle] (Cornell University Press, 1999), Mallarmé himself, not to mention his rabbinic alter ego in Lazare’s tale, was dismayed by the rise in French antisemitism. Mallarmé, linked to such anarchist Jewish creative spirits as painter Camille Pissarro, distanced himself from former friends, such as the artist Edgar Degas, who proved to be rabid anti-Dreyfusards. Mallarmé even sent a congratulatory telegram in 1899 to Dreyfus supporter Zola, stating, “I venerate your courage and admire the way in which… a man has been able to come out of this, new, entire, and so heroic!”

Another Lazare story, “Incarnations” (“Les Incarnations”), consists of a debate between two Jews, one European and the other Chinese, about the nature of the Messiah. Lazare’s Chinese Jew opines, quoting an eminent rabbi from India (!), that, in order for the Jewish people to recognize him when he appears, the Messiah must “conform in appearance to the way people imagine him.” The notion that God must design himself to suit the limited imagination of mankind is perilously close to the ironic maxim by the notorious infidel Voltaire, “If God did not exist, it would be necessary to invent him.”

On a less lofty theological plane, Lazare helped invent a spoof writer named “L. Blocolmiki,” supposedly a Polish refugee who immigrated to Paris’s Left Bank. L. Blocolmiki’s name derived from his group of friends: The “L” was from “Lazare,”; “Blo” from the historian Camille Bloch and “mi” from the French Jewish poet Éphraïm Mikhaël. (Other leftist writer friends contributing to the name were “Col” from “Collière,” and “Ki” from “Quillard.”) Yet these high spirits did not communicate in Lazare’s fiction, where a somber, even tragic, tone abides. Indeed, in a 1892 review of “The Mirror of Legends,” author (and Dreyfus supporter) Anatole France observed that even though Lazare’s fiction “evokes the serenity of martyrs and the suffering of prominent victims, as well as wise men’s dignity, it contains little of the milk of human kindness.”

Later, Lazare became so involved in a personal and social quest for justice in the Dreyfus Affair that he abandoned writing fiction and focused all his attentions on the struggle against antisemitism. When, exhausted by his battle for Dreyfus, Lazare died at age 38 in 1903, another Jewish Symbolist friend, the poet Gustave Kahn, praised his early literary work as imbued with the “two currents of thought which

dominated Lazare’s life: a passion for socialism and a concerned, trembling love for Judaism.”

Lazare was the public combatant par excellence, but another leading Jewish Symbolist of the day was, at least ostensibly, a shadowy figure haunting libraries and bookstores.

Although generally seen as a bookish Symbolist removed from the hurly-burly of political life, Schwob, despite his obsession for a variety of gentile writers, from François Villon to Robert Louis Stevenson, was also very much a Jewish man of his times. The descendent of a long line of rabbis, Schwob could be dismissive, as was Lazare, of Jews who he felt were insufficiently intellectual on the one hand or too materialistic on the other. The nephew of the great French-Jewish Orientalist David Léon Cahun, with whose family he lodged as a young student, Schwob was an avid student of linguistics. He would later translate into French such English classics as Defoe’s “Moll Flanders,” Shakespeare’s “Hamlet” (the latter for a production which [cast the Jewish actress]( http://upload.wikimedia.org/wikipedia/commons/7/7e/Sarah-Bernhardt_(Hamlet ‘cast the Jewish actress’).jpg) Sarah Bernhardt in the title role), and the works of other writers even today neglected in their homeland, like the Jacobean British playwright John Ford.

Schwob’s preface to his own “The King in the Golden Mask” alludes to Genesis, positing: “Be aware that everything in the world is only signs, or signs of signs. If you can envision a God who is not made in your likeness, and divine speech which differs from your speech, just imagine God speaking to you: in which case, the universe is his language. It is unnecessary for him to speak to us.” Schwob’s tale “The Talking Machine (“La Machine à parler”) further addresses the ironies and paradoxes of a God imagined by mankind, in a technological world where His miracles seem to be realized by machines.

Such lofty theorizing and intensely literary exploration, however, did not keep him from responding directly to the events surrounding the Dreyfus Affair, thereby losing a number of friends who opposed Dreyfus, like the poet Paul Valéry. In 1899, Schwob wrote to his mother: “Just like you, I am outraged and dismayed by the [Dreyfus] Trial. It is abominable and foul.” As in Lazare’s fiction, Schwob’s tales investigate the theme of the Wandering Jew, as well as the redemptive power of a despised minority. For Schwob, the Wandering Jew was a key 19th-century literary theme representing mankind’s perpetual quest for an ideal: “Yes, the eternal wayfarer wanders through these pages [of “The King in the Golden Mask”] with his anxious step.” Even Schwob’s stories that did not explicitly mention the Wandering Jew were thus declared to be tangibly concerned with the theme.

Enjoying a revival of interest with a recent reprint of his “Selected Works” by Éditions Phébus in Paris, as well as a lavish catalog from Éditions Gallimard of a major 2006 exhibit in the western France city of Nantes, about his life and works, Schwob loved literature in a way that did not prevent him from being socially and politically aware. After his untimely death in 1905 at age 37, his widow, Marguerite Moreno, herself a noted actress, wrote a memoir praising his “eyes, blue as a distant Oriental sky, bitter and sagacious, tender and moving.”

Like the landmark 2006 colloquium at Paris’s Musée d’Art et d’Histoire du Judaïsme (Museum of Jewish Art and History), devoted to Kahn, who was also a Zionist and socialist, the new publications about and by Schwob and Lazare underline the burgeoning, daring literary creativity of French Jews, at a time often seen in retrospect as uniformly tragic, marked by the devastating events of the Dreyfus Affair.

Watch a clip of Sarah Bernhardt as Hamlet (Marcel Schwob’s translation is inaudible in this silent film from 1900):