The Path Of the Just: Is Mussar the ‘New Kabbalah’? 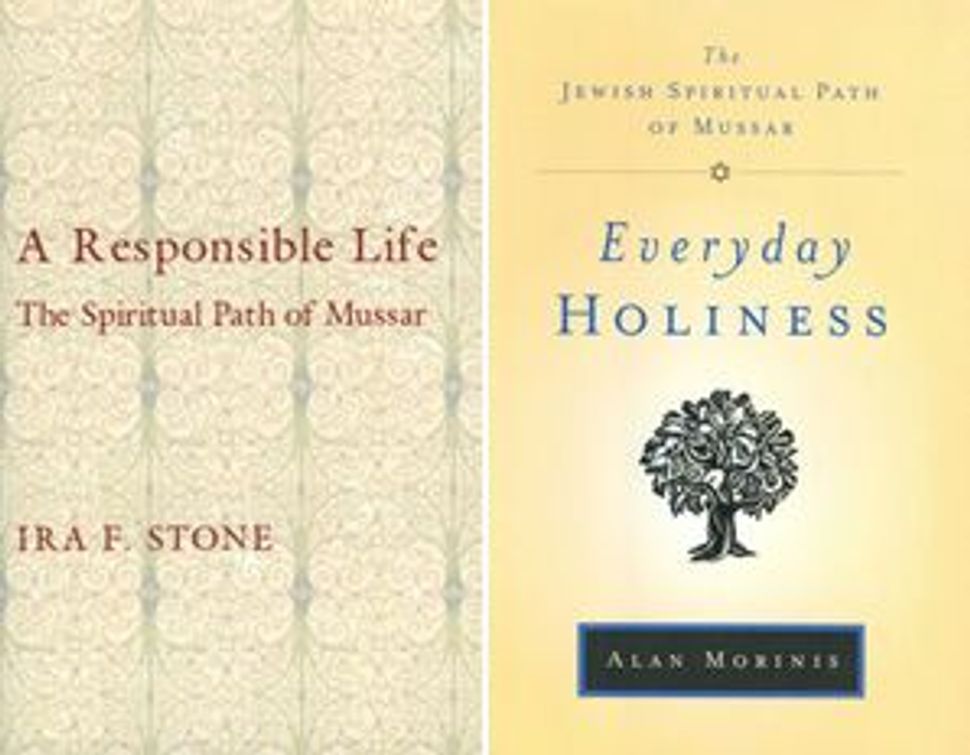 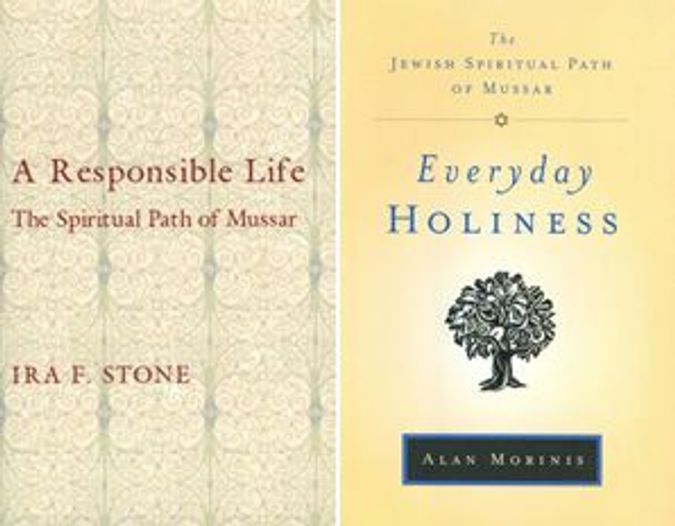 How do you become a better person? A simple question, it would seem, but there are no easy answers — and no agreement as to which of the many paths toward self-improvement is most efficacious. In general, the mainstream Jewish path has been one of heteronomy: conforming one’s behavior to externally defined norms. Other systems, such as the teachings of Jesus and those of the Buddha, focus more on internally purifying the heart than on externally governing particular behaviors — some with an emphasis on self-love and affirmation, others on self-critique and self-abnegation. Well, the jury is still out.

Mussar, the moralistic movement within Eastern European Judaism that had its zenith at the turn of the last century, tends more toward the latter strains. It recognizes that, as Nachmanides (and Jesus) said, one can obey all the laws and still be a scoundrel (naval bi-rishut ha-Torah), and so it focuses instead on rectifying the middot, or character traits, from within. The general contours of Mussar practice are straightforward: introspection and self-accounting (cheshbon ha’nefesh) to determine where one is falling short, and a variety of techniques to improve one’s behavior, ranging from the mundane (such as repeating maxims of good behavior) to the bizarre (such as inviting ridicule in order to cultivate humility).

Perhaps surprisingly, Mussar, which in its extreme forms can involve asceticism, piety and self-abnegation — not to mention hyper-scrupulous observance of the commandments — has undergone something of a renaissance in recent years, prompting some to label it the “new Kabbalah,” i.e., the latest Jewish spiritual trend. Two recent books by two founders of new schools of Mussar illustrate the appeal, but perhaps also the shortcomings, of this old-new wisdom.

Alan Morinis’s “Everyday Holiness: The Jewish Spiritual Path of Mussar” is a readable, engaging, friendly book — quite at odds with Mussar’s reputation for piety and, well, sourness. Morinis came late to Jewish observance and spiritual practice; his last book, “Climbing Jacob’s Ladder,” told his story of evolution from Rhodes scholar and Hollywood mogul to Mussar-practicing yid. While many such baalei teshuvah are overzealous in their observance and fundamentalist in their zeal, Morinis has maintained an even keel; he writes as one besotted with the Jewish path, but not so intoxicated as to forget the conventions of the secular. He’s an accessible guide, and a sober one.

“Everyday Holiness” is clearly written for the layperson, and much of the book has a familiarity to it that, to this reader at least, diminished the novelty (some would say weirdness) of Mussar practice. For example, more than half the book is devoted to enumerating 18 virtues on which one might focus one’s attention — an appendix to the book lists over 50 more — with the sorts of anecdotes and exhortations one regularly finds in self-help literature. Morinis is a better writer than most, and he avoids the clichés and tautologies that make much self-improvement literature insufferably obvious. But there’s little new here; don’t we all know that it is good to be generous, patient and kind?

Where “Everyday Holiness” excels is where it explores how Mussar is different from, rather than similar to, what we already know. Here, Morinis is again an affable guide, prescribing daily, weekly and yearly practices to translate the generalities of ethics into the particularities of daily life. For instance, he advocates selecting 13 midot and focusing on each for one week at a time — four cycles of the 13 each year. For each week, Morinis exhorts the reader to awaken with meditation or study on the attribute in question, spend the day increasing one’s sensitivity to it — both practices remarkably similar to Vipassana, or Buddhist insight meditation — and then end each day with a written cheshbon ha’nefesh that evaluates one’s progress.

I’ve not tried this practice at any serious length, and so cannot comment on its efficacy. Certainly, it seems valuable to focus one’s moral attention on a limited set of qualities, not least because it renders the vast task of self-improvement more manageable and defined — next week, I’ll worry about humility; this week, I’m focused on trust. It’s also doubtless true that any structured attention to one’s ethical habits is likely to improve one’s behavior.

Yet it’s hard to see Mussar becoming “the new Kabbalah.” For starters, it may be not spiritual enough for spiritual aficionados: It doesn’t bring about altered consciousness, doesn’t involve any esoteric wisdom and has few bells and whistles. It’s not even very Jewish; as Morinis notes, even its advocates had to sandwich Mussar practice in between the more normative activities of Torah study, prayer and observance of the commandments, and there is little distinctively Jewish about these ethics, as there is, say, about Kabbalah.

On the other hand, Mussar may be too spiritual for secularists: Given that Morinis focuses on secular values to the exclusion of religious ones (many Mussar texts are at least as concerned with scrupulous ritual observance as they are with ethics, but Morinis leaves those out), one wonders why Mussar is superior to secular forms of self-improvement, which come less freighted with tradition. If pure ethics is the goal, why bother with religious forms at all?

Of course, all this assumes that there is some zone of the “spiritual” distinct from ethics — which is precisely what Mussar aims to deny. For Mussar, spirituality is most centrally expressed in ethical action, in the “everyday holiness” we are able to cultivate in our exchanges with other people. It’s a noble belief; I just wonder who the audience is.

Ira Stone’s “A Responsible Life” is an almost perfect complement to Morinis’s book. Stone is literary where Morinis is accessible, biographical where Morinis is practical. And most noticeably, Stone is communal where Morinis is individual. In Morinis’s book, Mussar practice is essentially solitary — focused on diarizing, meditation, introspection. Drawing on different sources from Morinis, Stone advocates working with partners and groups who act as witnesses (and sometimes judges) of one’s behavior, creating an almost mystical fellowship of ethical rectitude. Stone leads such a fellowship in Philadelphia, where he is also a congregational rabbi. For him, the community is all.

What the Mussar circle does, in Stone’s depiction of it, is keep us honest; with witnesses, everything is out in the open. But while this can have a “feet to the fire” quality, it is actually not so different from the contemporary practice of “co-counseling,” in which laypeople counsel one another, offering not analysis or advice but simply a listening presence. There are no experts, no leaders — as soon as one partner is finished speaking, the roles switch and the listener becomes the talker. The effects can be quite powerful — and empowering, as the work is accomplished without therapists, fees and professional offices.

Frustratingly, Stone’s book gives precious little direct advice beyond “find yourself a partner and a community” to those wishing to take on Mussar as a personal practice. Perhaps this is because the particulars, as Morinis also notes, will of necessity be different for each person (I may need to work primarily on anger, someone else on laziness or deception). Or perhaps it is because Stone is more interested in describing what Mussar is (his book has more material on the history and key figures of the movement), while Morinis focuses on “how it can work for you.” Whatever the reason, one can finish “A Responsible Life” without knowing exactly what to do next.

The great gift of Mussar lies less in its enumeration of the virtues than it its distinctive technologies of cultivating them. Perhaps not all of us, but certainly most of us by a certain age, know the traits to which we ought to aspire. The question is how to do it, how to translate whatever our values are into the lives that we actually live.

To this question, Mussar provides a clear answer: Look closely at yourself, and set yourself a discipline of watchful self-accounting, as rigorous and serious as your diet, your work schedule or your regimen of physical exercise. Take ethics at least as seriously as you take Pilates.

Surely this is a salutary message for our times. Yet if we 21st-century Americans tilt too far in the direction of moral laziness, many of us also tip too far in the other direction: toward too much self-criticism, self-judgment, even self-hatred. Aware of the tendency for Mussar practice to turn to unhelpful self-abnegation — beating one’s heart just a bit too hard on Yom Kippur — both Morinis and Stone are careful to praise moderation and condemn self-loathing.

But for this reader, the larger question is still open. Enumerating virtues, measuring behavior and recording where one falls short seem, by all accounts, to work. Yet what if we were to believe that improving the self came not from measuring and accounting, but from loving, from cultivating joy, loving-kindness and generosity in an open and loving heart? It’s a myth that self-love leads to narcissism; overindulgence comes from loving oneself too little, not too much. Real spiritual work inexorably leads to ethical action, as in the supposedly world-disregarding Buddhist monks who at the time of this writing are leading a mass, nonviolent protest movement in Myanmar. Might it not be better to love, first and foremost, and leave the counting behind?

The Path Of the Just: Is Mussar the ‘New Kabbalah’?