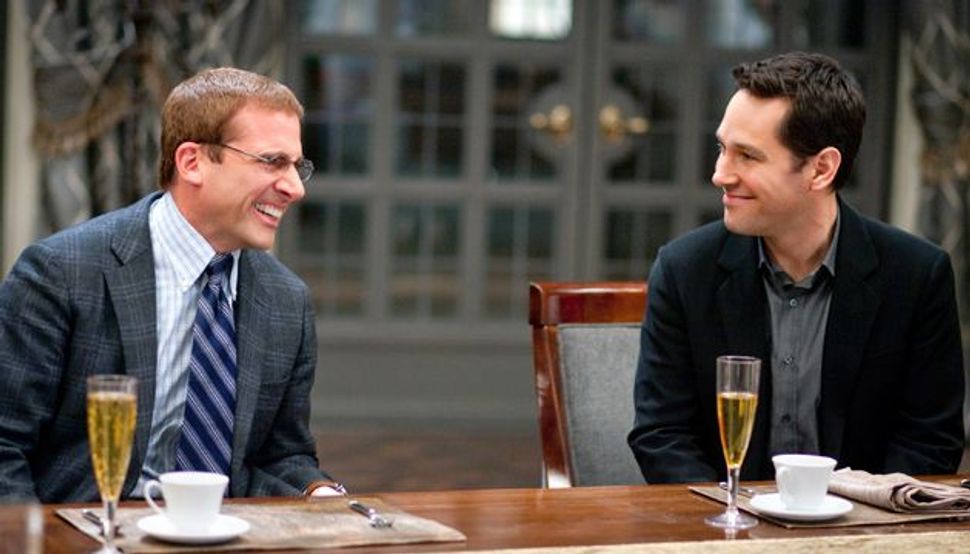 Schmendriks of a Feather: Tim (Steve Carell), left, and Barry (Paul Rudd) getting ready for dinner in the forthcoming ?Dinner for Schmucks.? Image by DREAMWORKS

Last week’s column, a reply to a reader’s query about the Yiddish word mentsh, invoked Michael Wex’s 2009 book, “How To Be a Mentsh (& not a Shmuck).” Today, we return to the second half of Wex’s title, spurred by Paramount Pictures’ announcement of the release, this summer, of a new comedy directed by Jay Roach, starring Steve Carell and Paul Rudd and called “Dinner for Schmucks.”

A May 3 New York Times article by film writer Michael Cieply raised a number of questions about “Dinner for Schmucks.” Some had to do with etymology: Where does the Yiddish word shmok come from? (Wex has an original theory about this, which I’ll have to put off for another time.) Some had to do with propriety: Should “schmuck,” which is also Yiddish slang for a penis, be considered too offensive a word to appear on marquee and in newspaper ads? And some had to do with accuracy: Is “schmuck” the right term for either of the movie’s two main characters — one of them a misfit who has been cruelly invited to a dinner party in order to entertain the other guests with his “geeky behavior,” the other his sadistic host?

In short, what, in the way the word is used, makes a schmuck a schmuck? And in what way is a schmuck different, Cieply asks, from a schlemiel, a schlimazel, a schmendrik or a plain old jerk?

Anyone familiar with these words knows that a schmuck is very different. In Yiddish and Judeo-English parlance, a schmuck is not haplessly inept like a schlemiel, an inveterate blunderer like a schlimazel or a pathetic sad sack like a schmendrik — all types one feels sorry for without being tempted to help them, since un-helpability is one of their salient traits. Nor is a schmuck quite the same as a jerk, because while the two have much in common, a schmuck is more dangerous and can cause serious damage, while a jerk is too ineffectual to do much harm. This makes “schmuck” a stronger term of opprobrium.

And yet we still have not said what a schmuck is commonly thought to be. Is he, as my American Heritage Dictionary of the English Language states, someone “regarded as clumsy or stupid; an oaf”? Not at all. The American Heritage is defining a schlemiel, schlimazel or schmendrik. A schmuck can just as well be brainy, graceful and charming. He can be first in his college class, win a prize for ballroom dancing and break hearts as easily as dishes.

Is he then, in the words of the Encarta World English Dictionary, someone “regarded as being unworthy of respect”? Of course he is — but this tells us nothing of value about him. Louts, cads, blackguards and knaves are unworthy of respect, too. One might as well define a skunk as “an animal that smells bad.”

Or is he, as Wex argues in his book, the opposite of a mentsh? If being a mentsh, Wex contends, is doing “what you know to be your human duty, even if the obligation is at odds with your own preferences,” those of us who are schmucks, he writes, though “we might think that we’re self-actualizing… are really self-centered and mean, with so powerful a sense of entitlement to whatever we think should be ours — whether it’s something we already have or something we want — that there’s no room for anyone to get in our way. We want it, we’re going to get it, and if it’s at someone else’s expense, who cares?”

A schmuck is thus, for Wex, the quintessential narcissist. He can be bright, talented or accomplished, but he never fails to do the wrong thing, because he thinks too much of himself.

But although this may be better than the American Heritage or Encarta definition, it, too, is inaccurate. Indeed, as Wex himself observes elsewhere in his book, a schmuck can just as well think too little of himself. As an example, Wex points to the character of Bontshe Shveig in I.L. Peretz’s well-known story by that name. When, upon arriving in heaven, Bontshe is told that his poverty and suffering on earth have entitled him to any reward he might ask for, he can bring himself to request only a fresh roll with butter every morning. And by the same token, you would be called a schmuck by most people if you found a buried treasure in the desert and turned it over to the nearest police station 500 miles away, or if you didn’t ask the girl you were in love with for a date because (though unbeknownst to you, she was secretly in love with you, too) you were afraid she would think you too bold.

A schmuck is, in short, someone who lacks not intelligence, but all insight into what is humanly appropriate and what is not. This makes his condition remediable. A schlemiel, a schlimazel and a schmendrik are irredeemably what they are. A schmuck can be enlightened. He can acquire, through a painful process of self-examination, the moral and social understanding that he has been missing. He can become, to revert to Wex’s dichotomy, a mentsh.