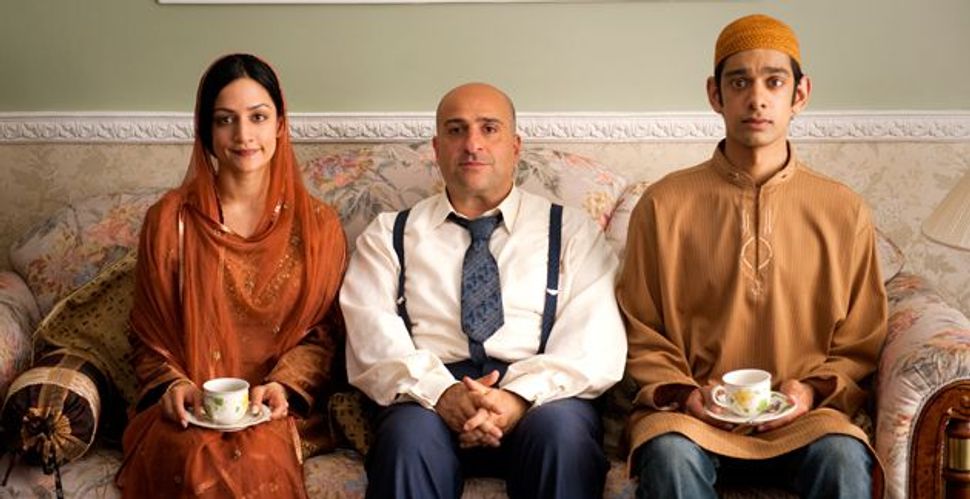 Meet the Parents: In ?The Infidel,? Mahmud (Omid Djalil), center, pretends he is a Muslim so that his son can marry the stepdaughter of a radical preacher. Image by COURTESY OF MET FILMS

Mahmud Nasir is a Pakistani Muslim whose passion growing up in Britain during the 1980s was for New Romantic music and, to judge by his love of Tottenham Hotspur, football. He is barely observant, and once wrote a letter to the local paper, arguing that fellow Muslims ought to follow the path of moderation. But after his mother dies, he clears out her home and makes a discovery that even an assimilated Muslim finds hard to bear: He was given up for adoption when he was 2 weeks old — by a Jewish couple. His birth name is Solly Shimshillewitz.

This revelation, in the comedic film from Britain “The Infidel,” is not dissimilar from the one suffered by Jewish realtor Leon Geller in the 1993 British comedy “Leon the Pig Farmer,” in which Leon discovered that an artificial-insemination error meant he was the son of, you guessed it, a pig farmer. Now, Mahmud, played by British-Iranian standup comedian Omid Djalili, must keep up the pretense of being Muslim so that his doe-eyed son, Rashid (Amit Shah), can marry the stepdaughter of a radical Muslim preacher. Mahmud is too petrified to admit to friends or family that he is Jewish, so he ducks and dives, keeping his Judaism secret while trying unsuccessfully to gain access to Isaac Shimshillewitz, the man whom he believes to be his father and who lies dying in a Jewish old-age home, guarded by an Orthodox rabbi who won’t let Mahmud in until he learns what it means to be a Jew.

Still worse for Mahmud is the fact that his guide to Judaism is Lenny Goldberg, a miserable, boozy, recently separated American Jew who drives a London cab. (“The Infidel” is full of paradoxes: Muslims who are Jews, Americans driving London cabs, an imam who says it’s okay to be gay.) Lenny teaches Mahmud how to dance the hora and plies him with books about the Holocaust and diseases: all the better for Mahmud to embrace his hypochondria. Lenny spends an inordinate amount of time teaching Mahmud how to shrug, because, you know, that’s what Jews do.

Indeed, “The Infidel” is largely reduced to repetitive gags about shrugging, dancing and about peppering conversations with faux Yiddish words. As a result, despite Mahmud’s crash course, he never really seems to learn anything or to get in touch with his Jewish side. He’s angry when he needs to be wracked with guilt, uptight when he ought to be ridden with angst, and sincere when he could benefit from a bit of chutzpah. (D’oh, there’s that Yiddish slipping out again!)

Near the end of the Coen brothers 2009 black comedy, “A Serious Man,” the camera pans across the congregation at a bar mitzvah. Although the film is set in the Midwest in the 1960s, the faces could have been from an Ashkenazi synagogue anytime, anywhere. “The Infidel,” in contrast, struggles to portray any recognizable Jewish characters at all. Lenny, played by Richard Schiff from “The West Wing,” could just as well be propping up a dirty Irish bar as giving a bar mitzvah speech. And although the rabbi, played by British-Jewish comedian Matt Lucas, has a realistic deathly white pallor, he acts more like a vicar masquerading as a rabbi than like anything else.

Lucas went to the same school as “The Infidel” screenwriter David Baddiel, a comedian, writer and columnist who rose to fame in the United Kingdom on the back of a certain brand of laddish humor, in partnership first with Rob Newman and later Frank Skinner. Although “The Infidel” is a post-9/11 film of radical clerics and “Free Palestine” demonstrations populated largely by white, middle-class Brits, many of the gags feel like Baddiel’s schoolboy stuff of the 1980s and ‘90s. A Muslim preacher is a “fatty fatwa of a father-in-law” or a “beardy weirdy f**ker.” When the Monty Python team referred to each other as “big nose,” it was satire; here it’s just name-calling.

Baddiel was raised in a nonpracticing Jewish home in North London and has a complicated relationship with his heritage. In 2007, in London’s Times newspaper, he lamented that he had become “British Culture’s token Mr Jew.” And on a recent BBC television program that traces the genealogy of celebrities, though he grew misty-eyed over the thought that one of his ancestors may have fought in the Warsaw Ghetto he also appeared extremely uncomfortable when brought face to face with long-lost frum cousins in Golders Green.

Perhaps as a result, Baddiel’s film suffers from a general lack of warmth. Lenny’s home, the bar mitzvah party, and even the supposed friendship between Lenny and Mahmud are accompanied by an overriding sense of gloom. If we are to take away anything from this movie, it is that Jewish life in Britain is miserable and that Islamic life is only marginally happier. The payoff at the end appears to be that you can be truly happy only when you see the hypocrisy in religion and when you stay true to yourself and your family.

There has been some controversy in the United Kingdom about whether “The Infidel” is offensive to either religion. Some have wondered whether humorless Muslims might even impose a fatwa. But nothing has been forthcoming, probably because the film is so lame. The real offense here is that this comedy is just not funny.

Paul Berger is a freelance writer living in New York.

Watch the trailer for “The Infidel” below: