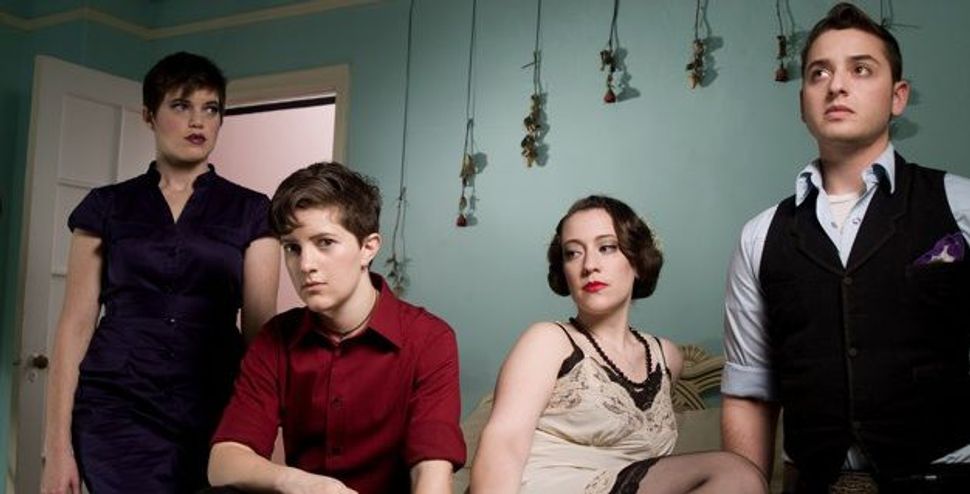 Listen to The Shondes’ “Make It Beautiful”

Listen to The Shondes’ “My Dear One”

There may be more blatantly Jewish punk bands than the Brooklyn-based Shondes — Australia’s YIDCore used to play a ska cover of “If I Were a Rich Man,” and Can!!Can’s Patrick Aleph stage-dives while screaming out lessons from the midrash — but there’s probably no better name for one.

In fact, despite their name (the Yiddish word for “shame”) and their genre, the Shondes are suspiciously low-key. Their album art looks more Dashiell Hammett than garage band. Their songs have names like “Get Out” and “Fire Again” — names that channel angst, anger and embittered love, but in a way that’s dark and brooding, not kitschy and flamboyant. If anything, in the two years since their first album the Shondes’ music has grown less like straight-ahead punk and — the biggest shonde of all — more like pop.

But this new music might be their biggest revolution yet.

The Shondes’ previous record, 2008’s “The Red Sea,” was a blend of rock, punk and thrashy distorted-guitar music. The songs were noisy symphonies reminiscent of Olympia bands like Sleater-Kinney and Nirvana. (That’s a loaded comparison, but the wild post-teenage freedom of “Your Monster,” the closest thing to a single on “Red Sea,” feeds off the same energy as early Nirvana tracks.) In contrast, how to describe the just-released “My Dear One”?

For starters, the album begins with a pizzicato violin.

The title song is a fragile ballad carried by the strength of Louisa Solomon’s voice. “Last night I almost flew to you/my sixth floor window with a view,” she sings, airily and frolicky, over those plucked strings. It could be a relationship song, but Solomon quickly clears up whom she’s talking about: “I never knew God to live in/the traffic and the scaffolding.”

Then, at the end of the first verse, the rest of the band explodes effortlessly into the song, matching Solomon’s energy with raw noise. It’s the musical equivalent of going from zero to 60 in no time at all, a quiet little pop song shedding its old skin and emerging as a completely different, feedback-heavy, fueled–up power ballad.

The songs on this album move from the klezmer-rock bombast of “Lines & Hooks” all the way to the pop of “Make It Beautiful.” Most of the songs on “My Dear One” are love songs, and it’s impossible not to think of the band’s personalities and politics when you listen. “Miami” is an ode not to the city, but to lost love: The Shondes’ last tour ended abruptly in that city, after their erstwhile guitarist left the band. “Gather Up Your Prayers” might be a breakup song, or it might be a breakup song for God; it works as both.

The Shondes’ messages of social change and sexual identity are there — the band has performed at Palestinian-solidarity rallies and at gay and lesbian benefits — but they’re subtly handled. The lyrics mostly use the universal “you and I” dichotomy, and the listeners’ tendency to interpret as simply as possible sometimes shortcuts the implications, hearing generic love songs rather than specific stories. “Miami,” which starts off with Solomon angrily demanding, “Did you leave me on Venice Beach?” over rumbling drums, is about a very specific breakup, but — like all great songs — it could be about anyone being abandoned, anywhere. They are a Jewish band, and they’re playing klezmer modalities and time signatures, but you could not know any of that and still think the song you’re listening to is the best song you’ve heard in years.

Solomon also plays bass, and three-quarters of the delight in listening to the Shondes is that their stuff is so damn danceable. Solomon and drummer Temim Fruchter are the center of the band’s songs. Guitar and violin float above the beat. Even when the Shondes are being soft and pretty, there’s a hardness about the songs that gives them muscle, one that never lets our brains relegate the music to the background.

The Shondes are still rebels, still playing with our emotions and forcing us to question our values — but in a weird, roundabout way, they’re also forcing us to see their pop songs as complex and emotionally mature. It’s way too early to quote Pete Townsend’s overused “Hope I die before I get old” credo, and the Shondes have a ways to go before they reach The Who by any measurement — but they’ve also found a way to age without getting, you know, quiet.

Matthue Roth is the author, most recently, of the Russian-Jewish immigrant-punk novel “Losers” (Push, 2008). His screenplay, “1/20,” is being made into a feature film.