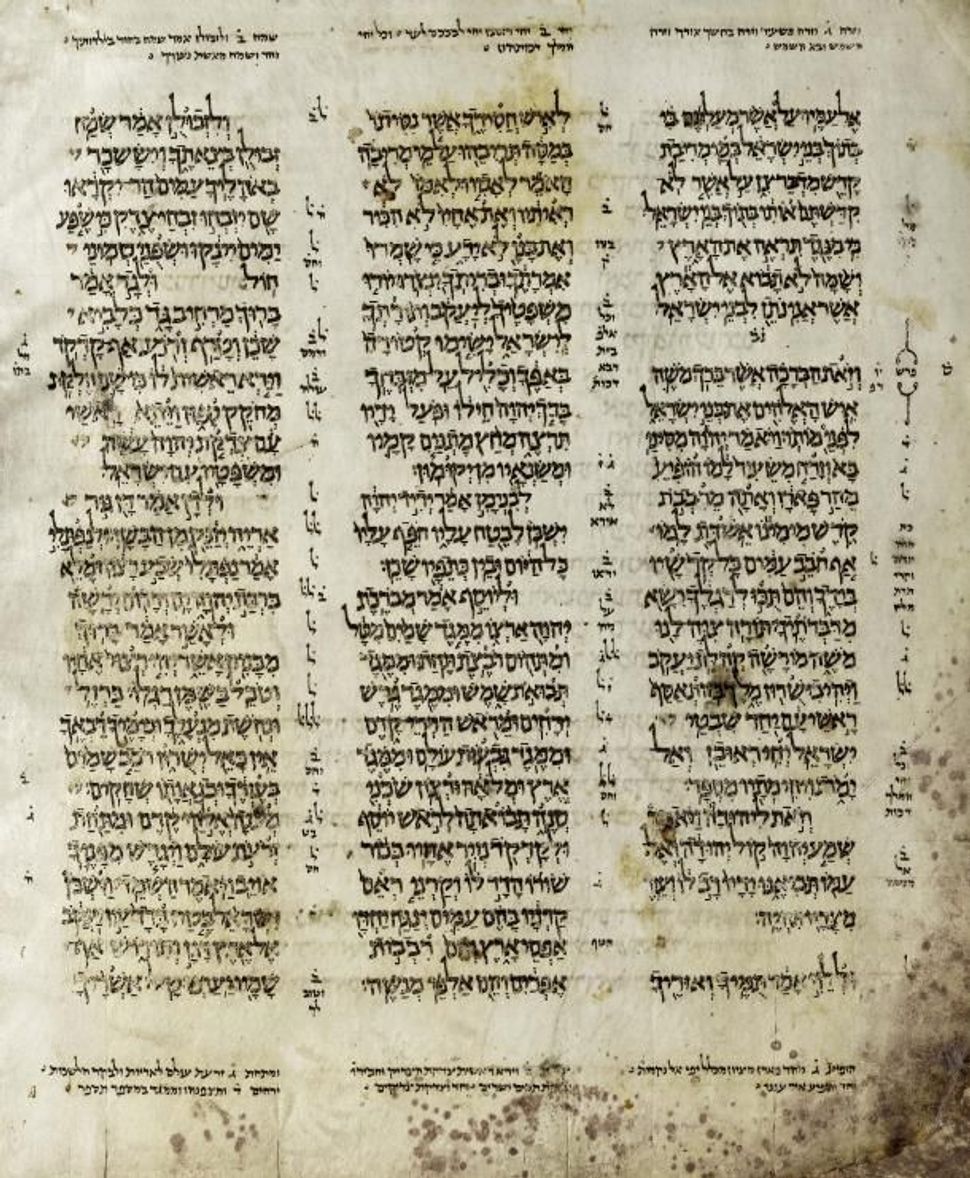 Crown of Aleppo: The Mystery of the Oldest Hebrew Bible Codex
By Hayim Tawil and Bernard Schneider
Jewish Publication Society of America, 220 pages, $40 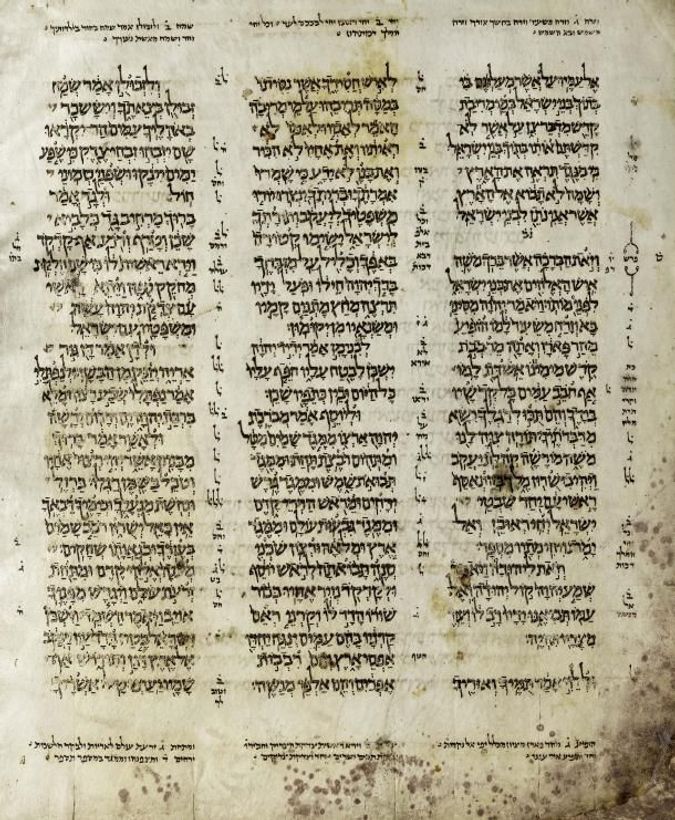 There is something profoundly alluring about the manuscripts of great literary works. Whether the handwritten fair copy of “Ode to a Nightingale” or a stray page of Shakespeare, Kafka’s diary or the notebooks of Leonardo da Vinci, we are drawn to manuscripts as talismanic objects, revealers of secrets, at once precious and terribly fragile. They bear both a human and a miraculous imprint. In a secular age, such items can bring one closer to an understanding of the term “holy.”

How much more so when the work in question is a holy book. The idea of discovering the original manuscript of the Bible — even supposing such a thing ever existed — is an impossible fantasy, but the aura surrounding the Aleppo Codex has something of the same power. Completed around 930 C.E., the codex was, until the finding of the Dead Sea Scrolls, the oldest-known handwritten copy of the Hebrew Scriptures in existence. In their succinct exposition of the book’s history, “Crown of Aleppo,” Hayim Tawil and Bernard Schneider also make the case for its being the most authoritative.

The Crown, as it became known, was the supreme achievement of the Masoretic scribes of Tiberias, Shlomo ben Buya’a, who produced the text, and Aharon ben Asher, who notated it. As Hebrew fell out of common use and became a literary language, the text without vowels and cantillation marks became more and more vulnerable to misreads; the work of the Masoretes was therefore vital to the sustained integrity of the Bible.

Other, later notated codices survive (2,500 of them dating from before 1100, astonishingly, in the National Library of Russia alone), but none with the accuracy and consistency of the Crown. To cite just one example, only seven errors in the use of so-called “full” and “defective” spellings have been identified in the Prophets, as against some 250 in the 11th-century Leningrad Codex.

The history of the Crown is a very complicated one, and the authors do well to present it in a way that is both coherent and suspenseful. For the story involves a good deal of suspense and mystery, possible theft, forgery, smuggling and other skulduggery, mixed in with the minutiae of scholarship and the overall tragedy of the tale. From Tiberias, the Crown traveled to Jerusalem and, at the Sack of Jerusalem by the Crusaders, to Fostat in Egypt, where it was studied by Maimonides and given his imprimatur of perfection. Then, in 1479, it turned up in Aleppo — no one knows how — where it was to remain for nearly 500 years.

How that sojourn in Syria ended, with the pogrom and attack on the Great Synagogue in which the Crown was apparently lost, is sadly well known. What is perhaps less well known is the desperate attempt to save the Crown, which took place four years earlier, in 1943, when the respected scholar and former Aleppan Yitzhak Shamosh was sent from Jerusalem to plead for its repatriation. Aleppo’s Council of Sages seemed almost ready to listen, until one rose to his feet and quoted from the dedication to the Crown itself: “Cursed be the one who redeems or sells it.” So great was the superstitious power of the codex that Aleppans believed its removal would mean the destruction of the community.

This degree of veneration is easier to understand when one realizes that in Aleppan tradition, the Crown was written not by a ninth-century Tiberian, but by Ezra the Scribe himself. It was held to have magical powers; the few who were allowed access to it described it as a “wonder of wonders.” Its end pages were adorned with drawings of plants and flowers; its letters shone like gold and seemed to fly out from the text.

Ironically, the very reverence in which the Crown was held led to its ultimate desecration. Locked away in a metal safe, it was neglectfully loved, its binding falling apart and its pages invaded by a red fungus that gave the letters their flaming and dancing appearance. After it was dragged from its metal case in the Great Synagogue attack, everyone, seemingly, wanted a piece of it. Evidence suggests that it was neither burned nor extensively damaged in the 1947 pogrom, yet only slightly more than half of its 487 pages eventually made it to Israel in 1957, smuggled out at the risk of his life by a dairyman, Murad Faham, inside a washing machine. Like a celebrity torn to pieces by her own admirers, the Crown was dismantled and 200 of its pages vanished, no one knows to where. Possibly the Mossad does; as an unidentified “senior member” advised one of the authors when questioned: “You don’t want to know. It’s a very dirty story.” Yet the evidence that Tawil and Schneider have gathered suggests that these pages probably do exist somewhere and may yet come to light.

Meanwhile, the returned pages, so tirelessly sought by Israel’s then-president, Yitzhak Ben-Zvi, have been restored and exhaustively studied. The reconstruction of the missing sections (a chapter of the story in which my own family played a bit part) enabled the publication in 2001 of the Jerusalem Crown, based on the Crown’s text, while the original is now available for all to view online.

The history of the Crown, as Tawil and Schneider observe, reflects the history of the Jewish people: exile, upheaval, struggle and rebirth. It would also be true to say that its fate reflects the best and worst of human nature, the effects of which are now inscribed so poignantly on its once perfect pages.