A Trip to Our Motherwell, Ferber and Gottlieb 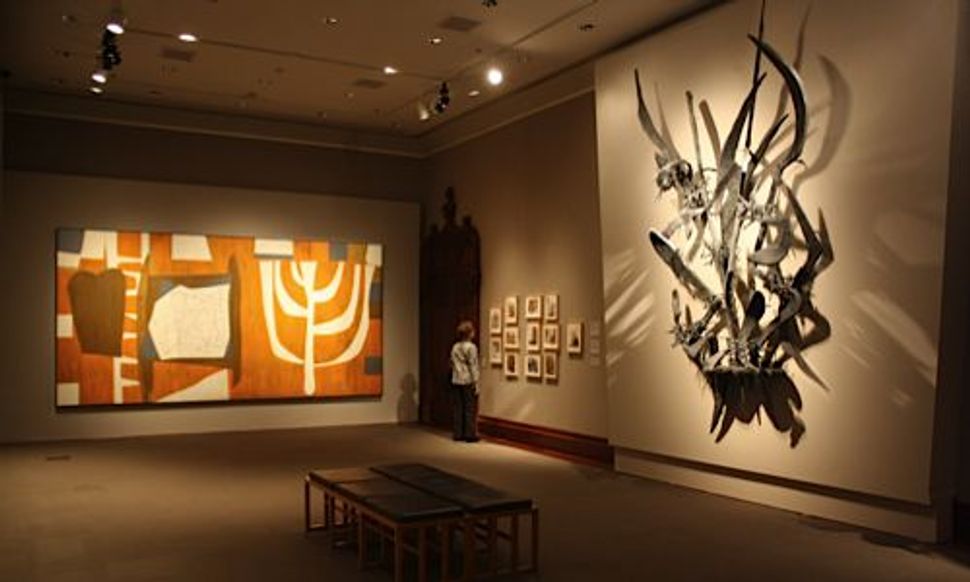 When church groups go on field trips, do they heckle the bus driver?

“NO! WRONG WAY!” Kvetched the back of the Congregation B’nai Israel (CBI) bus, when the driver went towards I-78 not down Vauxhall but, inexplicably, down Valley.

My brother, and many other ex-Millburn N.J. New Yorkers, met us at the museum.

The Congregation was going to a private showing of “Modern Art, Sacred Space: Motherwell, Ferber and Gottlieb,” at the Jewish museum. The exhibit is entirely made up of CBI art, and a model of our synagogue. I grew up with this art.

Because CBI is under construction, the three modern art treasures had to leave the building. So they went to the Jewish Museum on Fifth Avenue. The exhibit, which runs through August 1, received lengthy articles in the New York Times, the Wall Street Journal, the Newark Star-Ledger, Art News, the Jewish News and others.

Here was our Torah curtain (it has actually been in the museum since 1987, with the synagogue using a replica of Adolph Gottlieb 20-foot Torah curtain, because textiles are so fragile), Here was the 12-foot high copper and lead sculpture of the burning bush by Herbert Ferber (called “…and the bush was not consumed”) from the outside of the synagogue, our orange Motherwell mural.

Associate curator Karen Levitov spoke, and “light refreshments” (sun chips and nuts) were served. And here was a cute architect’s model (made by students at Columbia) of our very own shul, with its historic (for the Conservative movement) parking lot, next to the Rahway river. In the model, the parking lot looks huge.

The synagogue expansion was originally designed to be largely underground but now rises up on Millburn avenue dwarfing the thicket of trees next door: goodbye to the low-to-the-ground Frank Lloyd Wright-like lines envisioned by architect Percival Goodman in 1951 (as described by Ms. Levitov). Goodwin “revolutionized synagogue design,” she explained.

“The synagogue never looked like that,” said a man looking at the model.

“It did! I did the Kiddush for my Bat Mitzvah in the Sukkah Garden!”

This garden designed by Goodwin was enclosed in 1995 and is now a library. I told some other people who’d grown up at B’nai Israel about his comment. “Newcomers,” we sniffed.

Ms. Levitov told us how Rabbi Max Grunewald, who had been the chief Rabbi in Mannheim before fleeing the Holocaust and becoming our Rabbi, gave Goodman full freedom to commission the abstract artists to create site-specific work.

“That would never happen today,” said my brother. There would be committees.

I always knew that we had Important Art in the synagogue. When my father’s friends visited from Boston, they wanted to see it. My father’s friend Dave Aronson is actually an artist, and had his own show at the Jewish Museum when I was in high school. My father had an artist’s eye, developed by palling around with an artsy set as a youth, and he knew that what we had, was Good.

I thought the red Torah curtain with its abstracted looking pictures was pretty, and must have been made by children. I was not completely wrong: though Adolph Gottlieb designed it, the women of the synagogue made it. Roslyn Barreaux Brendel (nee Barrabosh) remembers sewing a piece of it when she was little.

A picture of ladies sewing on it hung next to the curtain. Who were they?

“I don’t recognize anyone,” said Brenda Eisenberg, an 80-something year member and past Sisterhood President, among other honors.

“Isn’t this Florence… I forget her last name?” said my mother.

When Ms. Levitov showed the photo as a slide people sighed. There was the artist’s wife, Esther; Rabbi Grunewald’s wife, Hedwig; and Mary Bamdas, the lead seamstress. The sewing was done in her dining room.

A diagram next to the curtain, in the exhibit, explained the symbols.
Did you know those circles were pomegranates? No!
What are the chess pieces? The twelve tribes!

For a long time Motherwell’s mural had a guard rail around it, but it still had coffee stains on it before it was restored, according to the museum. As a child, Motherwell’s Jewish symbols (Jacob’s ladder, a menorah, a Torah scroll) seemed friendly.

“It’s called ‘The Wall of the Temple,’ if you didn’t know your mural had a title.”
I didn’t know that.

Ferber’s 12-foot sculpture on the outside of the building apparently startled drivers on Millburn Avenue, when it was first mounted on the outside of the building, but its parallel spires always struck me as calm, not scary. Most people thought it looked bigger there on the wall.
I thought it looked smaller. I like it dominating the whole frontyard of the synagogue. I look forward to getting it back.

Dr. Irving Alper, in his 80s, was Bar Mitzvahed at the old synagogue on Lackwanna Place, which became the old library, and is now a parking lot. He mused at the art that had been under his nose all these years:

I didn’t understand the great talent of these men, that they were really luminaries in their field of art.

Modern Art, Sacred Space: Motherwell, Ferber, and Gottlieb will be at the Jewish Museum, New York, through August 1, 2010.

A Trip to Our Motherwell, Ferber and Gottlieb