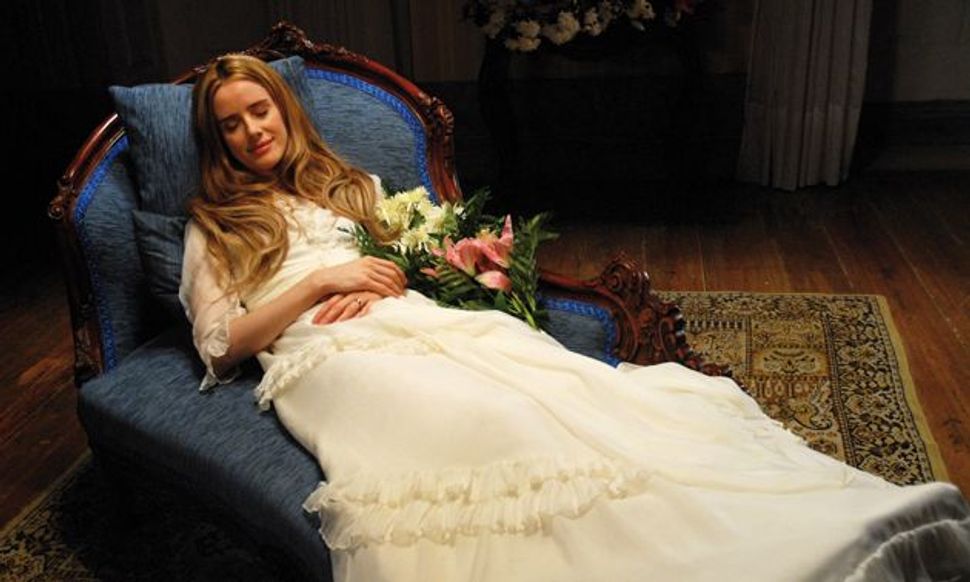 Robed in Snowy White: In Manoel de Oliveira?s ?The Strange Case of Angélica,? the plot begins to unfold after a bride is photographed in death by the Jewish refugee Isaac. Image by COURTESY OF O ESTRANHO CASO DE ANGéLICA

It took a 101-year-old Catholic to give Judaism its due at the Cannes Film Festival this year. Manoel de Oliveira, the oldest active director in the world, breathed new life into the ancient issue of persecution in “The Strange Case of Angelica.”

Angelica (Pilar López de Ayala) may sound like she’s the subject, but the story belongs to a Jewish refugee photographer named Isaac (Ricardo Trêpa). The only Jew in the movie, he lives in a Portuguese village with only gentile neighbors, but is suddenly called to take pictures of Angelica, a beautiful young bride who has died suddenly. Her images — caught in the small hours of the morning and within minutes of her passing — haunt him to the point that she appears to open her eyes and crack a smile when he looks at her photo. In his dreams, he flies through the sky with her.

Already a brooding sort, Isaac falls into a deeper funk. His fellow boarders worry about him. He shoots unmarketable photos of vineyard workers. He is tedious company at mealtimes.

“I thought of doing the film just after the Second World War,” he told the Forward. “Hitler killed 6 million Jews in Europe, and the Jews were fleeing to Portugal to fly to the States.”

The project languished. The Portuguese landscape changed. The specter of the Nazis faded a bit. But one element remained. “Jews are still persecuted,” he said.

Receiving hearty applause, “The Strange Case of Angelica” bowed in the Un Certain Regard section, one that often recognizes alternative cinema. The pacing and overt framing of scenes might bother those who want a little less art in their art theater, but it’s a little late in de Oliveira’s career to quibble.

The period of “Angelica” is deliberately left vague: old clothes; new cars; Isaac uses a film camera. The depth of his affiliation is also vague; he wears what could be the black suit and fedora of an Orthodox Jew, but we do not see him observing his religion. We do, however, see him reacting to the subtle contempt of others. A nun at the death scene repeats his name “Eyess-sack?” as if it were a bad smell. He gives her a polite speech about tolerance. De Oliveira included the segment, he says, to show an evolving comprehension between Catholics and Jews.

The question has arisen whether de Oliveira — whose last name many Jews were forced to adopt in Europe — has Jewish ancestry. “It’s a possibility,” he said in the press notes for the film, “but the truth is I’ve never come across any real evidence of Judaism in my family.”

In the screenplay, the writer-director had originally penned a debate about the root of Jewish hatred. But as the decades passed, de Oliveira said he depoliticized the dialogue, adding the environment and recession as additional catalysts for Isaac’s sadness.

De Oliveira does not clutter his narrative with backstory; he leaves some blanks for the viewer to fill in. “What must Isaac, a Jew, have gone through, and what is he going through now?” de Oliveira asked during the Forward interview, held at the Palais des Festivals. “His visions and dreams of Angelica are, as he says himself, something that relieves the pressure of persecution.”

Isaac passes the time by snapping photos of migrant farmers tilling the soil by hand. They sing peasant songs of what the grapes will reap. His lens admires their traditional ways. His heart seems to envy their connection to the surroundings.

“[Isaac] has no land, and nor does the artist,” the filmmaker said. “But he’s rooted in his instinct, in his gift as a creator, just like the painter is or any other artist.” And de Oliveira should know about land and art, having worked as a farmer midcareer before later blossoming as an auteur and winning two Golden Lions at the Venice Film festival and a Cannes Jury Prize in 1999 for “A Carta.”

Interviewing de Oliveira can be distracting. The urge to pick his brain about what he does to remain so vital can overwhelm cinematic concerns at times. He doesn’t look a day over 80. Though he customarily uses a cane, he walked unaided on the night of the premiere, showing off a jaunty gait.

Who better to make a movie that opens with death than a man who has defied it? And who better to focus on an outsider than someone who with every passing year of life becomes more of a curiosity himself?

As one famous Jew, Woody Allen, said of de Oliveira during a press conference, “I don’t want to reach 100 with an aluminum walker and dribbling, but if I could be like him, yeah, I’d love to reach it.” Allen later quipped that his general opinion on death remains the same: He’s against it.

De Oliveira takes the subject more seriously. “I’m not afraid of death,” he said. “I am afraid of suffering, though.”

Perhaps that is why he delivers a painless solution for Isaac. No ending will be divulged here, but it can be revealed that Isaac finds his happily ever after in a mingling of the faiths. When the villagers eventually must say goodbye to their solemn Jew, they can’t help but inject a little Catholicism into the proceedings. As long as Isaac has unloaded the burden of persecution, that’s kosher with de Oliveira. “We are all creatures of God,” he said.

Ron Dicker, who covered the Cannes Film Festival for the 10th time, is a freelance writer based in New York City.