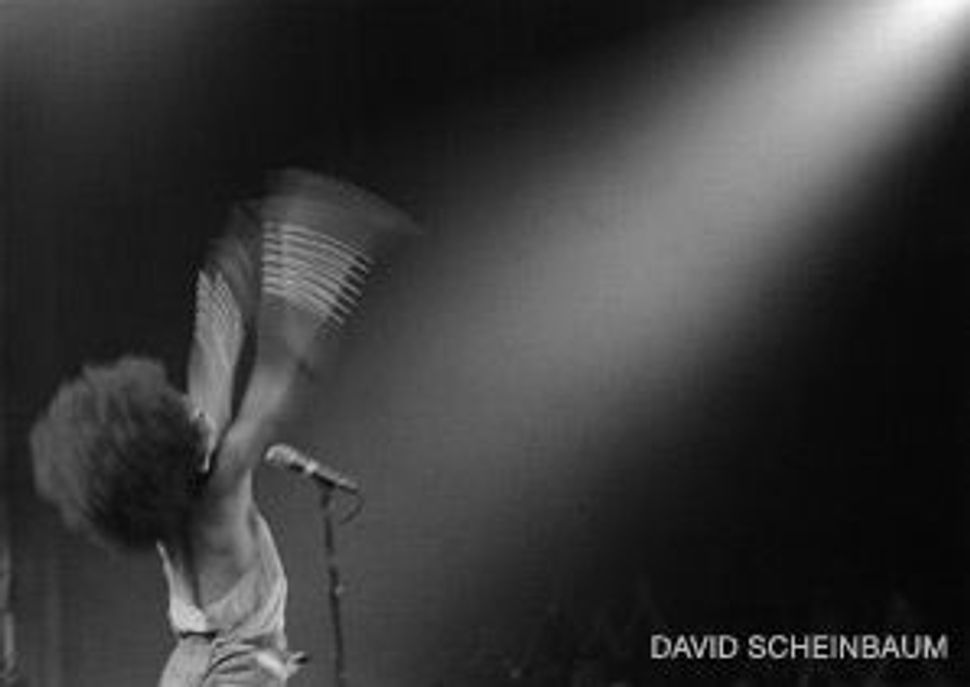 Scheinbaum photographed Erykah Badu, among others.

Two Jewish baby boomers — who live on opposite sides of the country and have never met — have both, on the advice of their sons, turned to the hip-hop community for artistic fodder. Although neither is comfortable being labeled a Jewish artist, New York-based painter Alex Melamid recognizes a major Jewish presence in hip hop, while David Scheinbaum, who lives in Santa Fe, N.M., sees little connection between the two. 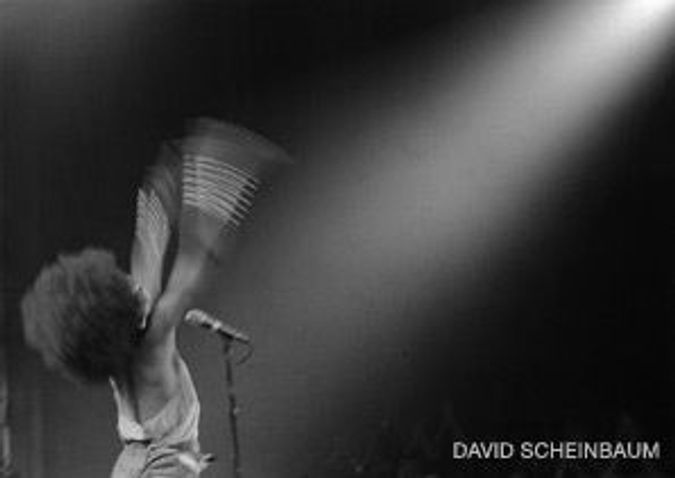 Scheinbaum photographed Erykah Badu, among others.

Scheinbaum attended his first hip-hop concert, which featured Del tha Funkee Homosapien, in Albuquerque in 2000 as the only parent willing to drive his son Zac and his 13-year-old friends 70 miles each way on a school night. The concert so inspired him that he kept returning. Scheinbaum managed to photograph more than 100 hip-hop artists, 26 of whom appear in “RECOGNIZE! Hip Hop and Contemporary Portraiture,” showing at the National Portrait Gallery in Washington, D.C., through late October.

“I am this older white guy. I’m not at all part of the culture. I don’t look like it. I’m an outsider,” said Scheinbaum, former director of, and professor emeritus at, the College of Santa Fe’s Anne and John Marion Center for Photographic Arts. “The fact that I could take these photographs is a tribute to these young people who permitted me to enter their lives.”

Though Scheinbaum created a series of photographs of Miami’s elderly Jewish community in the 1970s — of which he admits, “I don’t think I could have done that work if I weren’t Jewish” — he has declined to participate in Jewish art exhibits and rejects any Jewish aspect of his hip-hop portraits. “I am proud of my cultural heritage,” he said; however, he added that he’s “always somewhat resistant to labeling as a ‘Jewish artist.’ I’m not sure it informs my work.”

Instead, hip hop’s adoption of environmental and anti-war causes reminds him of Woodstock’s elevation of music to lifestyle from entertainment. “I had long hair and bell bottoms, and I wore beads,” he said. “I see it happening in hip hop. Whether one agrees with the politics or not, it’s an exchange of so many political views.”

Scheinbaum used American photographer Roy DeCarava, whose high-contrast images depicted Harlem’s jazz musicians, as a model for his own dramatic black-and-white photos of rappers. Most of Scheinbaum’s portraits show an individual rapper mixing or singing. But a 2002 portrait of Mos Def (Dante Terrell Smith) shows the rapper, cropped just above the armpits, staring at the camera with a half-smile (like the Mona Lisa’s). Only dedicated fans would peg the model as a rapper. By capturing Smith the man and not the performer, Scheinbaum’s photo recalls Richard Avedon’s famous 1957 portrait of Marilyn Monroe looking tired, depressed and shockingly unglamorous.

In contrast, Melamid recognizes the presence of Jews in the hip-hop business — one of whom is his son, hip-hop video director Dan “the Man” Melamid. The younger Melamid introduced his father to about 30 rappers, inspiring portraits that depict them as near-demigods. Twelve such portraits — of such rappers as 50 Cent and Whoo Kid, and other celebrities like Snoop Dogg and Kanye West — are on exhibit in Holy Hip-Hop! New Paintings by Alex Melamid, at the Museum of Contemporary Art Detroit until April 20.

Alex’s show is his first solo endeavor without his famous partner and fellow Russian Jewish painter, Vitaly Komar. The two created the Sots Art movement in Russia, which led to their arrest and persecution by the Soviet government. After finally securing exit visas, they immigrated to Israel, and then America, in the 1970s. The Melamids first lived in Jersey City, N.J., Alex said, in Section 8 housing, with residents that were mostly black, Hispanic and Arab; there were also Russians, some of whom were Jewish. This shared experience led to an overrepresentation of Jews in hip hop, he said, though he added that the Jews tended to produce while the blacks tended to perform.

Although the museum refers to Melamid’s portraits as “apostolic” and “holy,” Melamid downplayed the religious angle. “I don’t know what the hell it means,” he said of the museum’s title of the show. Instead, he said, he views the works — which set the figures in amorphous, brown backgrounds, just as Scheinbaum’s often fade into pitch black — as influenced by “traditional European portraits.”

Whether in traditional paintings or in photographs inspired by jazz, hip hop is finding its way into venues of high art, and it has not only the artists to thank but also their sons.