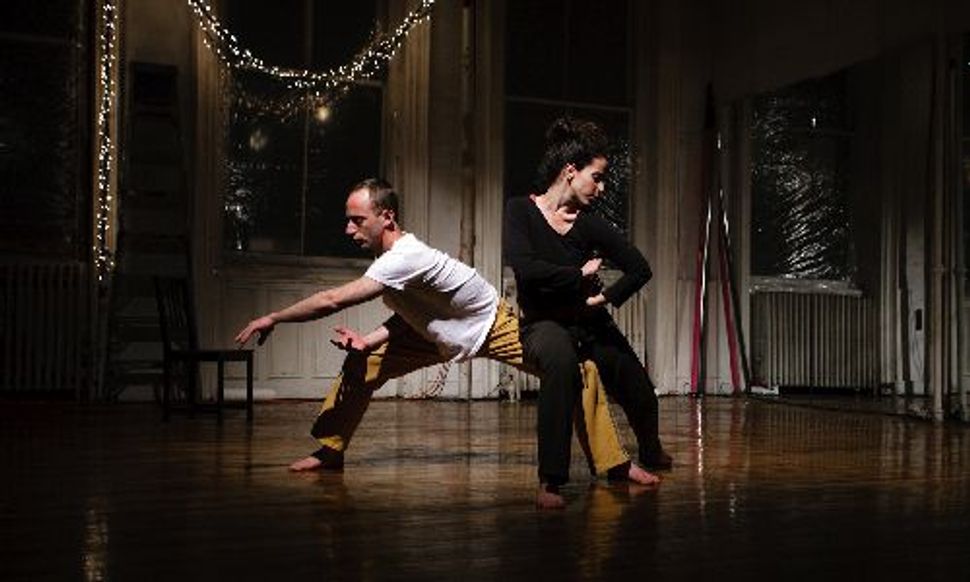 Facing each other, kneeling on top of a restaurant bar, Ella and Edo slowly begin to dance. YelleB, the dance company, made up of Israeli duo Ella Ben-Aharon and Edo Ceder, is continually exploring new performance spaces, so it is no surprise that at the company’s benefit party a wine bar would be used as a stage. Their movement is hypnotic: a combination of unbridled release and exacting control. The powerful athletics of this partnership are refined by a beautiful intimacy. Each moves with a profound instinct, in constant dialogue with the other’s body.

YelleB’s newest performance piece, “Pericardium,” premiered May 27th at the Joyce SoHo. Its title, referring to the wall that guards the heart, is fitting because the piece explores the concept of physical and emotional walls, and the human need for self-protection. The multimedia work, which includes dynamic footage of the pair dancing at the mechitza of the Kotel and at the security fence along the West Bank, is the product of a unique collaboration with video artist Adi Shniderman and architect Mattias Neumann. “Pericardium,” featuring an original score by Israeli musicians Yoed Nir and Odeya Nini, uses a video backdrop and innovative set design to dissect the stage into different compartments and to challenge the traditional audience-performer boundary.

According to Ceder, the piece transcends political agendas to reveal the human stories behind the creation of walls: “The physical creation of walls emanates from the walls within us, the fears we have to open up emotionally, and the decisions that we make about what to allow in and what to keep out. By exploring external walls like the mechitza and the Separation Wall, we push the audience to turn inward and look literally into the heart to explore the need for self-protection.”

The themes of separation and togetherness are personal ones for Ceder and Ben-Aharon. The couple met at the end of 2008 at a dance festival in Israel, while Ben-Aharon, who had already been living in New York for five years, was on a vacation. Four days after meeting they started creating dance together. Ceder relocated to New York five weeks later.

Ben-Aharon believes that YelleB’s work is deepened because she and Ceder share a multidimensional sense of intimacy. She reveals, “We consistently explore the idea of walls as so much of our lives are spent together: work, dance, and love. It is challenging to find the needed boundaries without putting up too much of a blockade.”

Originally from Nazareth and trained in classical ballet, Ben-Aharon has been creating dance since her childhood. After the army, she danced with Kibbutz Dance Company 2, and then moved to California in 2000 to pursue a BFA in performance and dance composition at CalArts Institute.

Ceder came to dance in a less traditional way. An athlete, well-versed in yoga and Brazilian Jiujitsu, he began formal dance training in his late twenties. After a year of study with the Vertigo Dance Company, Ceder connected with performance duo Tomer Sharabi and Maya Stern which led him to a variety of dance projects throughout Israel, Asia, and Europe.

In addition to performing throughout the United States since 2009, Yelleb has also developed Dance Exposure, its own form of educational outreach. The educational initiative provides interactive artistic experiences to both dancers and non-dancers. In alternative settings, such as nursing homes or schools, the dancers expose new audiences to dance and foster communication and self-expression.

YelleB relates much of the intensity of its choreography to the experience of living in Israel. “In Israeli society people feel an urgency to create,” reveals Ceder, “and that is very stimulating for the development of dance.” While they take inspiration from other choreographers, such as Batsheva Dance Company’s Ohad Naharin, Ben-Aharon and Ceder develop their work intuitively from their own personal stories.

“Pericardium,” with its distinctive set and video design, is breaking new ground in the realm of dance performance. As Yelleb’s first full-evening length production, last night was the first substantial opportunity for New York audiences to witness these two extraordinary dancers. Ben-Aharon and Ceder demonstrate an exquisite skill for partnering — each intricate movement and gaze appears as if the dancers are sharing their innermost thoughts. The experience is passionate, articulate, and breathtaking.

Stacey Menchel received her Master’s degree in European and Mediterranean Studies from New York University. She has previously written on the Mediterranean experience of the Holocaust, and the Jewish community of Spain. Her current project examines contemporary Israeli dance.

Watch “Working Towards Pericardium,” a short documentary about the development of YelleB’s new performance piece: