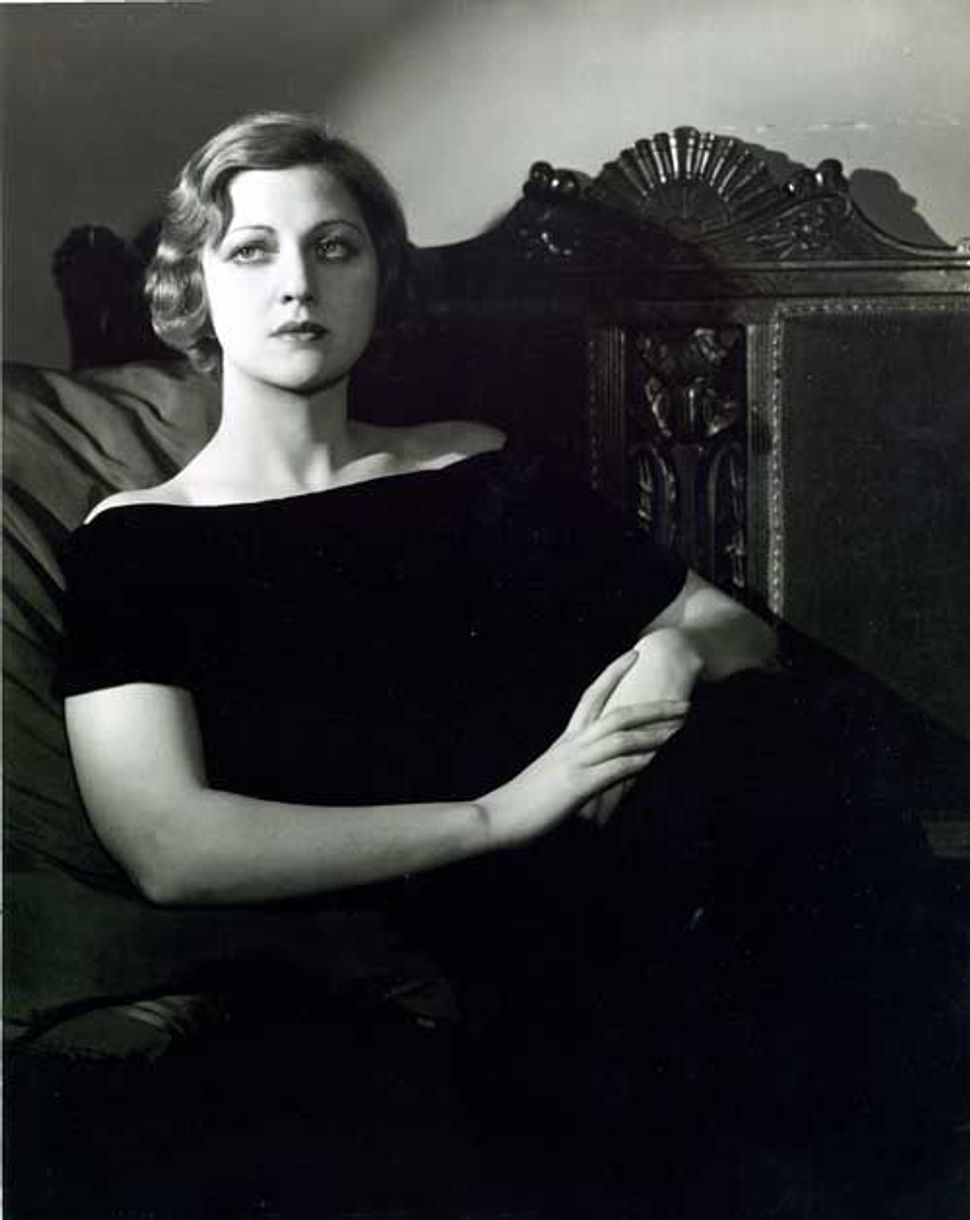 On April 8, 1935, congressional legislation created the Works Progress Administration, which developed millions of jobs for the unemployed. WPA agencies placed 8.5 million Americans on the federal payroll, including hundreds of Yiddish actors, writers, scene designers and theater directors hired for the administration’s Federal Theatre Project. On the 75th anniversary of the WPA and the FTP, unemployment is too high once again, and the benefits provided by the 1930s relief programs deserve reconsideration, as well as a tribute.

In retrospect, the FTP, which began in 1935 and lasted until 1939, can be seen as our country’s first and only national theater. Geographically decentralized and culturally diverse — with Spanish-speaking, African-American and Yiddish artists within its ranks, performing on rented stages across the country — the FTP revived stage classics and introduced millions of theatergoers to exciting ideas expressed through song, dance, satire and new social drama.

Some of the WPA’s Yiddish plays were staged in English. Jacob Charash, a founder of the FTP’s Anglo-Jewish Theatre, in New York, noted in January 1936 that his unit’s “employment to those artists on relief” would “enable the vast thousands of non-Yiddish Jews everywhere to see meritorious Yiddish plays in a medium they can understand.” Plays by Sholom Aleichem, Y.L. Peretz, Sholem Asch and H. Leivick were to be translated and heard in English and Yiddish under Federal Theatre auspices.

New Yiddish plays produced by the Federal Theatre included the world premiere of David Pinski’s comedy about a union of tailors, “The Tailor Becomes a Storekeeper,” as well as “We Live and Laugh,” a vaudeville revue featuring a cast of 100 Yiddish actors. The FTP also turned Sinclair Lewis and Clifford Odets into Yiddish authors, as it supported translation of their new plays into the language of Eastern European Jewish immigrants, who in the 1930s still comprised a large audience and welcomed the FTP productions in New York, Chicago, Boston and Los Angeles. It helped that admission prices to these plays were low, or free, since the federal government paid all salaries, and box office profits were not needed to continue the run of a play.

When Odets’s “Awake and Sing!” premiered in English in February 1935, its acclaimed presentation by the Group Theatre featured among its actors Stella Adler, daughter of famous Yiddish actor Jacob Adler. The play returned to New York three years later, again won audiences and this time featured a Yiddish-speaking cast directed by Jacob Mestel.

Mestel, a distinguished theater artist and writer, had arrived in the United States from Poland. In the 1920s he performed as an actor with Maurice Schwartz’s Yiddish Art Theatre in New York. He helped create the left-wing theater collective Artef (Arbeter Teater Farband, or Workers’ Theatrical Alliance). Immensely productive as a writer and editor, Mestel also performed in the Yiddish films “Uncle Moses,” “Mirele Efros” and “American Matchmaker.”

Mestel’s 1938 Federal Theatre production of “Awake and Sing!” restored to the play some qualities it lost earlier, when Odets’s colleagues at the Group Theatre had asked him to tone down the Yiddish colloquialisms and syntax that were part of his New York ghetto characters’ English. The playwright’s initial impulse to let Jewish immigrants speak of struggle, poverty and survival in their own language and speech rhythms was realized anew in Z. Weinper’s translation. Odets’s distressed characters who longed for a life “not printed on dollar bills” could be heard speaking Yiddish nightly on Broadway, at Daly’s Theatre, from December 1938 to April 1939.

Another major Yiddish version of an English play opened on October 27, 1936. The Federal Theatre’s production of the Sinclair Lewis play “It Can’t Happen Here,” based on Lewis’s novel of the same title, portrayed a fascist president in the White House. Lewis’s dystopian fantasy of American fascism included a scene in which a New England newspaper editor critical of the White House was imprisoned in an American concentration camp. The editor escaped to Canada from his cell and joined a resistance movement there.

When performed in Yiddish, Lewis’s story of escape from an American concentration camp had a special significance to its audience members, some of whom had escaped persecution in Germany or had relatives still abroad and were fearful of Hitler’s antisemitic regime. But the Lewis play alerted Americans of all backgrounds that fascism and antisemitism had supporters in the United States; the play’s timely dialogue could be heard across the country in 21 different Federal Theatre productions, most of them performed in English. (A Yiddish version of the play also appeared briefly in Los Angeles.)

By 1939, more than half a million Yiddish-speaking Jews had seen such plays as “It Can’t Happen Here,” “Awake and Sing!” and “We Live and Laugh,” and had heard federally sponsored radio broadcasts of other plays by Avrom Goldfaden and Jacob Gordin. It could and did happen here, although not without some opposition.

A number of conservative congressmen and their constituents regarded FTP plays like Lewis’s and Pinski’s as too radical. Congressional investigation of the FTP continued until all the funding for the project was cut. A battle against reactionaries raged offstage, and evidence of the fight can be seen in an unpublished memo among the Yiddish theater papers of Mestel, collected in the archive at the YIVO Institute for Jewish Research.

In his memo defending the WPA, Mestel astutely treated the Yiddish Unit of the Federal Theatre as part of a much larger cultural struggle. He wrote: 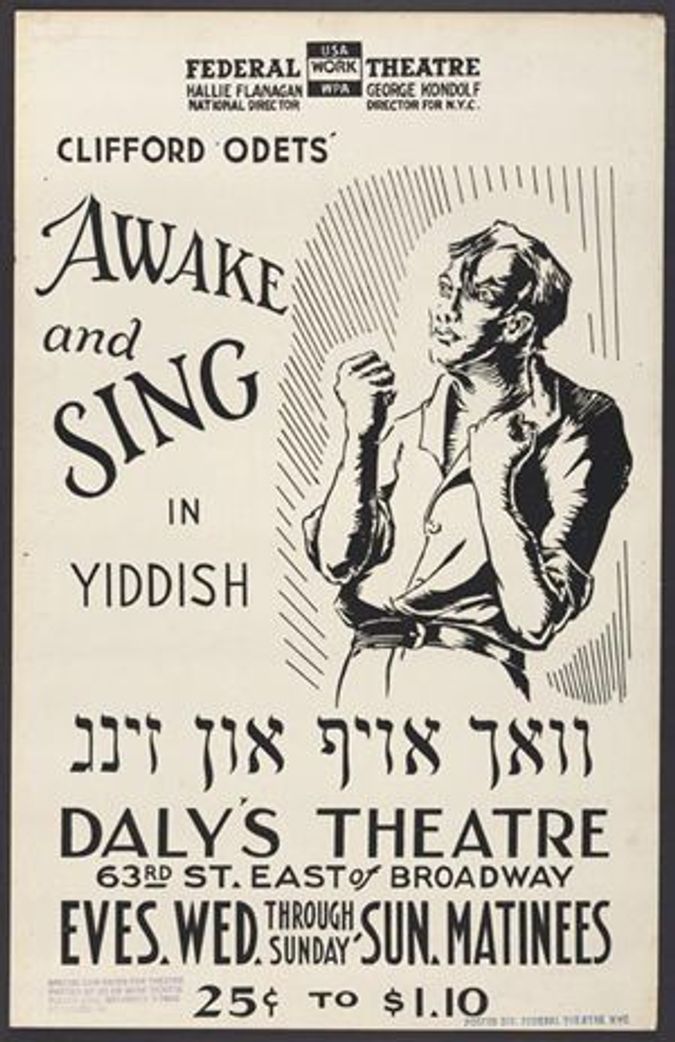 At times it seems as if the existence of the 8,000 artists in the Federal Theatre counts for nothing in the struggle. But when one takes into account the activity of the people who have created such productions as “One Third of a Nation,” “Power,” “Murder in the Cathedral,” “Pinocchio,” “It Can’t Happen Here,” giving joy and enlightenment to 25 million theatre-goers, then one understands the importance of such artistic work.

Mestel makes it clear that Jews within the FTP were participating in a national project shared by American citizens of many backgrounds, even as the Yiddish speakers retained their own distinct language and culture. He wanted Yiddish audiences to write their senators and congressmen and demand legislation for the continued life of the FTP, in all its broad-based cultural diversity. With his WPA colleagues, Mestel looked at the larger culture and its crises, and used new theater to increase public discourse with daring, imaginative stage voices.

Seventy-five years later, as unemployment again has risen high in the United States, we could use another WPA, with artists like Mestel directing its plays.