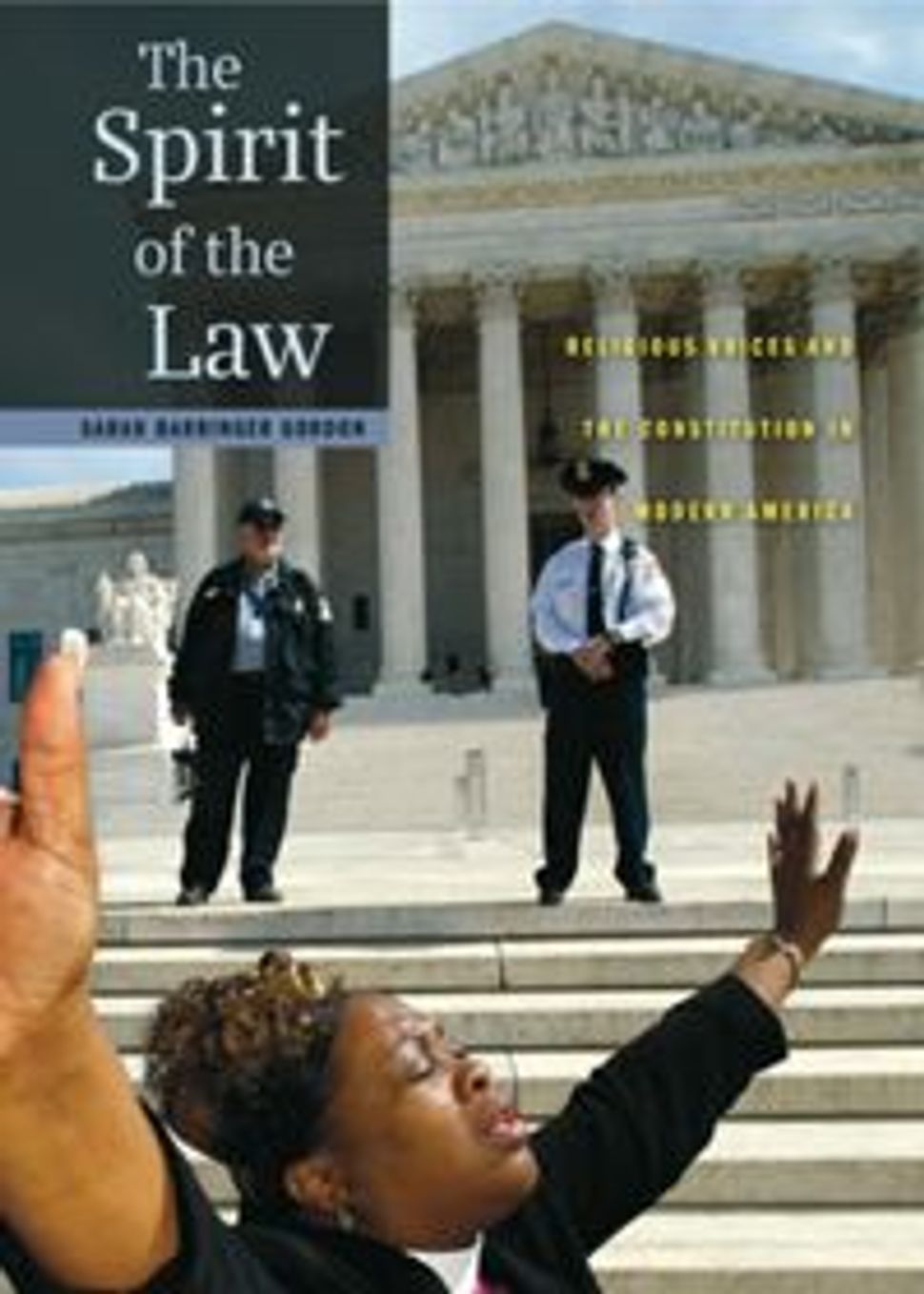 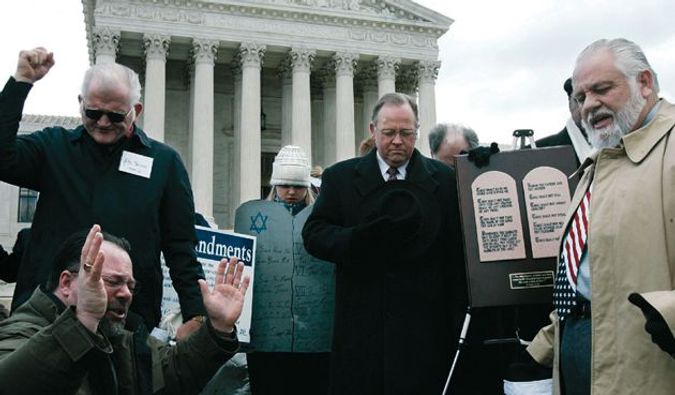 Supreme Commandments: In 2005, Christian groups prayed in Washington, D.C., while the Supreme Court heard two cases on whether Ten Commandments monuments should be displayed on government properties. Image by GETTY IMAGES

THE SPIRIT OF THE LAW
By Sarah Barringer Gordon
Belknap Press of Harvard University Press
316 pages, $29.95

Legal scholars usually tell us that law, especially constitutional law, shapes religion: nurturing its growth under the Free Exercise clause, while inhibiting its power under the Establishment clause. Sally Gordon, Arlin M. Adams Professor of Constitutional Law and Professor of History at the University of Pennsylvania, turns the accepted wisdom neatly on its head by demonstrating that it is the extraordinary power of the religious impulse that has shaped — and continues to shape — American law, not the other way around.

Echoing the title of Montesquieu’s elegantly written 18th century treatise, “The Spirit of the Laws,” Gordon’s story begins a century later with the Salvation Army. Today we think of the Army as genial characters straight out of “Guys and Dolls.” But Gordon recalls the fervor of the original Salvation Army, a raucously militant Protestant sect that sought to bring religion to the poor by parading and playing loud music, usually over the opposition of scandalized local authorities. She recounts the adventures of Joe the Turk, whose outlandish costume, ear-splitting musical talent and multiple legal battles with the authorities bear witness to the resiliency of the religious impulse in the face of secular opposition. It turns out that the streets belong to the people today in part because the Salvation Army fought, and won, one of the first great battles for free assembly in the United States.

Gordon then turns to the Jehovah’s Witnesses in the 20th century. Their missionary zeal, militant anti-Catholic rhetoric and refusal to acknowledge secular power led the sect into repeated brushes with the law. She reminds us that we can leaflet freely today in large part because the Witnesses, represented in the Supreme Court by Haydon C. Covington, simply would not take “no” for an answer. She recalls the debt that freedom of conscience and the modern First Amendment owes to the sect’s stubborn refusal to salute the American flag. Gordon charts the path — beginning in 1935, when Jehovah’s Witnesses in Germany refused to deliver the Nazi salute and were imprisoned in concentration camps — that ultimately led to Supreme Court Justice Robert Jackson’s iconic 1943 decision in West Virginia v. Barnette, setting out the charter of our modern First Amendment freedoms.

Gordon offers three additional illustrations of how religion shapes law in the modern world. While her writing style is dense, and would never be confused with Montesquieu’s spare elegance, her insight into the modern relationship between religion and law makes the effort worthwhile. Her story of effective Catholic control over many local public schools in the 1920s and ’30s, while told solely from the perspective of Protestant opponents, is an underappreciated aspect of our history. She identifies the emergence of a powerful Protestant counter-reaction to Catholic-controlled public schools as the source of the modern doctrine of strict separation of church and state. In learning about this slice of American history, I would have appreciated hearing a few Catholic voices in defense of the practice. It’s possible, of course, that the extant sources are all Protestant, but a glimpse of the Catholic side of the story would have enriched the narrative.

Gordon then goes on to explain how the acceptance of the strict separationist argument by an overwhelmingly Protestant Supreme Court triggered two remarkable religious counter-reactions: the first, an ongoing and partially successful struggle by the Catholic Church to funnel public funds to parochial schools; and the second, a partially successful effort by militant Protestants and Catholics to restore non-sectarian prayer and religious imagery to public life. Both religious movements succeeded in significantly changing the law in the past decade. A closely divided Supreme Court, now majority Catholic, has significantly loosened strict constitutional restrictions on funding religious institutions, voting narrowly to uphold school vouchers, allow public school remedial reading teachers into parochial schools and permit direct government aid to handicapped students preparing for the ministry. A similarly divided Supreme Court has also responded to an extraordinary outpouring of political anger by Catholics, conservative Protestants and some Orthodox Jews by pretending that many government displays of religious imagery are partially secular in nature and by permitting non-denominational but clearly Protestant religious clubs to meet on school premises after school.

Justice John Paul Stevens’s resignation and Elena Kagan’s probable confirmation as his successor will mark the emergence of a Supreme Court with six Catholic and three Jewish Justices — a far cry from the Protestant-dominated tribunal of the 1940s and ’50s that brought the nation strict church-state separation. It would, of course, be wrong to draw simplistic lines between the religion of a Justice and his or her approach to the relationship between church and state. Justice William J. Brennan, Jr., a Catholic, was a strict separationist. But I strongly doubt that the old Protestant-dominated Court would have held that a Latin Cross could serve as an official government commemoration of all World War I war veterans, including Jews, because the cross isn’t exclusively a religious symbol. If the government tried to use a cross to commemorate my father’s wartime service, Pop would spin in his grave. 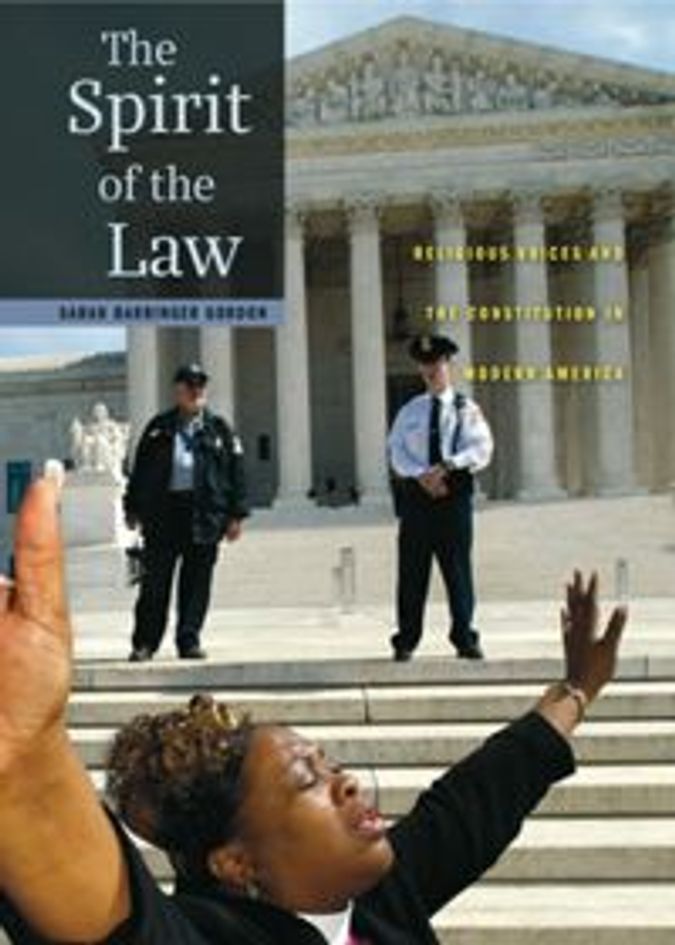 Gordon’s narrative strongly suggests that the counter-reaction to the attempted removal of prayer and religious imagery from public life has gone far beyond the Supreme Court, fueling much of the nation’s conservative politics and illustrating, once again, that it is religion that shapes our law, not the other way around. I would have found it very useful if Gordon had spelled out in greater detail the political emergence of the religious right as a reaction against the Supreme Court’s flirtation with strict separation between church and state, and its influence over the Republican Party.

Gordon ends with the important lesson that the capacity of the religious impulse to shape politics is not the sole property of the right. She could — and should — have made that point earlier, in the context of the role black churches played in the civil rights movement and the magnificent story of religious opposition to slavery, beginning with Quakers in 17th-century London and culminating in the willingness of Americans of all religions during the Civil War to bear almost incomprehensible burdens in God’s name.

Instead, she selects a contemporary example: organized support by progressive religious institutions for the ordination of women, acceptance of gay worshippers and recognition of same-sex marriage. Gordon chronicles the important role of Reform and Reconstruction Judaism in anchoring all three progressive coalitions, focusing on the role of women rabbis in successfully agitating for same-sex marriage in Massachusetts. She recounts how progressive religious denominations — especially Jewish congregations — first openly welcomed gay worshippers, then moved to performing religious same-sex marriages with no legal standing and, finally, organized politically to give the marriages full secular effect.

When my daughter first explained to me why she wanted to be a rabbi, she said that she had watched my wife and I spend a lifetime seeking to use law and reason to bring moral order to a chaotic universe. “Your norms are too thin,” she told me. “I’m going to try to achieve the same goals — but I’m going to use thicker norms.” Sally Gordon’s excellent book explains why she was right. In the long run, the norms of faith are thicker than the norms of law and reason. That’s often grounds for celebration. But it’s also a reason to be very frightened.