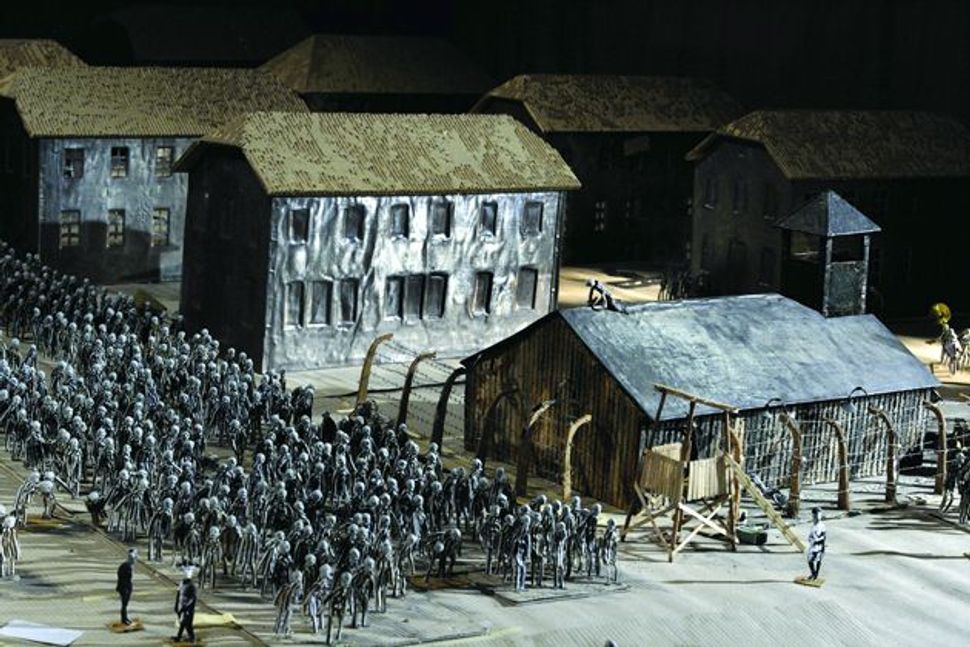 Death kAMP: Puppet inmates huddle in the twilight of a model Auschwitz. (click for larger view) Image by COURTESY OF HOTEL MODERN

The performance of KAMP by the Dutch theater group Hotel Modern is a blend of puppetry, film, art installation and sound that attempts, according to its press release, “to imagine the unimaginable: the greatest mass murder in history, committed in a purpose-built city.” When I saw a recent production at St. Ann’s Warehouse in Brooklyn, it seemed much more unimaginable to me that anyone could have thought that doing what basically boils down to a puppet show about Auschwitz was a good idea.

I’ll readily concede that it must have been hard to put together a replica of Auschwitz-Birkenau out of balsa wood, wires and miniatures, complete with the train that brings prisoners for slaughter and slave labor into the station. Thousands of 3-inch handmade puppets represent inmates and Nazis alike as they go about their concentration camp days and nights. The little figurines get gassed in the showers, beaten in work yards, hanged in courtyards and electrocuted on barbed wire. 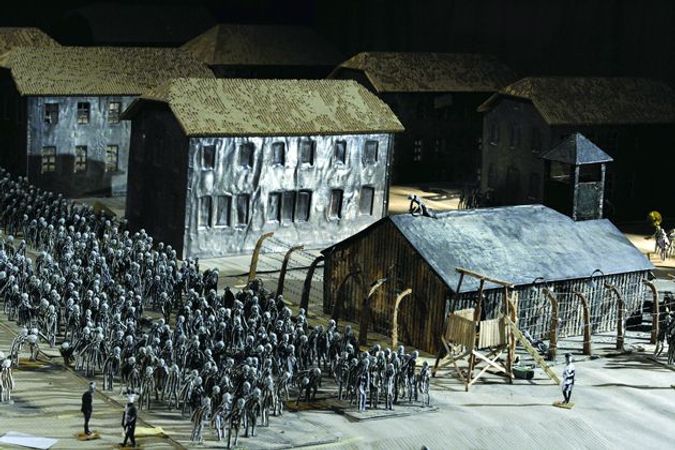 Death kAMP: Puppet inmates huddle in the twilight of a model Auschwitz. (click for larger view) Image by COURTESY OF HOTEL MODERN

Before any discussion of the work’s controversial content, it’s important to note that the artistry involved in KAMP is admirable. The hour-long production is part of the Great Small Works 9th International Toy Theater Festival. An enormous model of the Auschwitz camp fills the stage, and is a mostly accurate representation of the location (though, to my knowledge, the “Arbeit Macht Frei” sign was never in blue neon). The techniques used by the three members of the theater group to convey “action” are ingenious. Puppets are moved by hands and strings almost imperceptibly, with their clay faces stuck in Edvard Munch-like expressions of agony (inmates) or sadism (Nazis). The use of sound in the production — a train pulling into a station, for example, or the shuffle of weary-sounding feet through gravel — is brilliant.

There are no spoken words in the production — and the written words the program does use to describe this installation and show are ill-chosen. “Auschwitz is a dark icon of the modern era, a mythical catastrophe,” the program states. Excuse me? Mythical? “What occurred there is difficult to believe, sometimes even for those who experienced it,” the program continues. “In KAMP, Hotel Modern attempts to re-enact the historical reality.” There is no mention at any point of Jews, Judaism or the attempted annihilation of the Jewish people in the Holocaust. The Jews have been utterly erased. Ironic?

“The audience becomes the witness,” the program concludes loftily. But it didn’t seem as if anyone in the audience really understood what we were looking at — or why it was important to do so.

Despite the production values, the installation doesn’t shed any new intellectual or experiential light on the events — it just presents a physical version of a single iconic location, in miniature. If that doesn’t offend you, perhaps think how you’d feel if these same people presented tiny 3-inch puppets wearing suits and ties jumping to their death from a colorfully burning 4-foot-tall World Trade Center.

This is not to say that the Holocaust can be depicted only in predetermined ways. Yann Martel’s recent flawed novel, “Beatrice and Virgil” made the point that there are many types of writing that can be deployed to address the Holocaust.

Similarly, Art Spiegelman’s “Maus” certainly took a “childish” genre and used it for Holocaust representation. Surely Spiegelman’s cartoon depiction of his father’s story of Holocaust survival, told with mice as Jews and cats as Nazis, could be seen as irreverent, perhaps inappropriately so — or, if not, at least not duly respectful of the dead.

The crucial difference between Hotel Modern’s KAMP and Spiegelman’s “Maus” is that in telling his father’s story, Spiegelman brilliantly exposed the inherent flaws of narrative as a conduit for personal experience. To tell a story, Spiegelman showed how one must resort to obviously suggestive but inadequate tropes and symbols, like animals and cartoons.

Language is inevitably flawed. With our words, we struggle to convey the essence of experience, but never reach it completely, especially when the scope of the experience is inhumanly large. “Maus” embodies this struggle between a story and its telling, and, in so doing, brings insight about the Holocaust to a new generation.

But what, in contrast, does KAMP have to offer by way of insight into the Holocaust? KAMP’s observation seems to be that Auschwitz was a place where really, really bad things happened.

At the performance I saw, the audience was completely silent, almost reverentially so. The only exception was when one prisoner puppet was beaten “to death” by another Kapo-level puppet: Some members of the audience involuntarily gasped with shock.

Perhaps they were shocked by the sickening, thudding sounds that accompanied this puppet-on-puppet violence. Or maybe it was the sad way the puppet gave up the ghost, “becoming” an inanimate lump of wire and plastic dragged away by another puppet.

But the sick-sounding thud for me was internal and occurred after the performance, when I saw the brisk sales of “Free Gaza” ($15) signs in the lobby. The signs (not meant to imply, by the way, that Gaza should be free from Hamas, lest there be any confusion) were being sold by the festival, next to a card proclaiming, “Half of proceeds go to the Free Gaza Movement, Flotillas To End The Siege.”

It’s a sad day, I thought, when puppets have more vocal proponents than do living Jews in Israel.