Of Boy Cantors and Little Jewesses 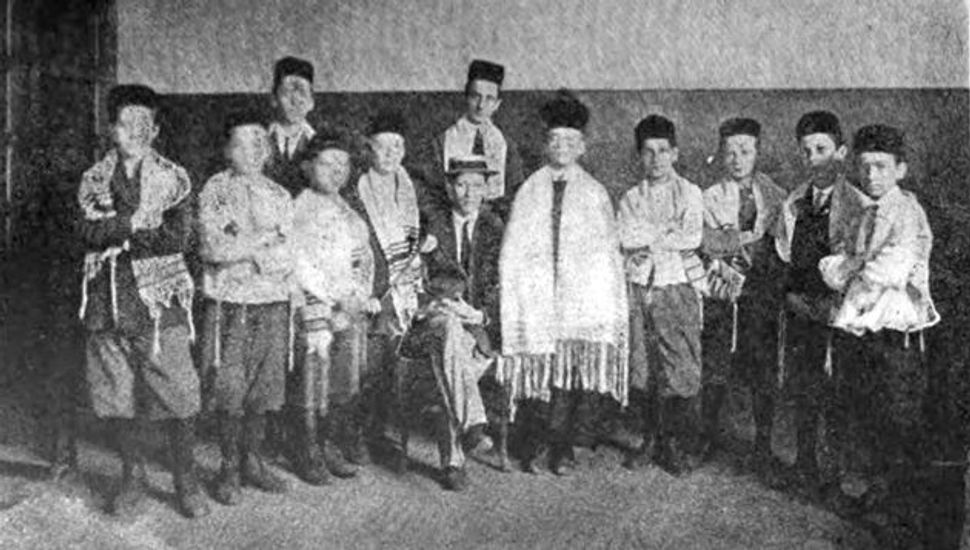 ?The Boy Cantor and His Choir ? Uptown Talmud Torah?: The junior congre- gation was not just a New York innovation. Image by JEWISH COMMUNAL REGISTER OF NEW YORK CITY 1917-1918

With graduation upon us, ’tis the season to think about lofty matters, about responsibility and duty and legacy and heritage. In that connection, consider, for instance, the transmission of Jewish culture from one generation to the next, a task that has bedeviled the Jewish community for centuries now. The Jews of a much earlier time and place took it for granted that their sons and daughters would follow in their footsteps, but those who came of age in modern, let alone post-modern, times discovered that such assumptions tended to be honored more in the breach than anywhere else. Moses Mendelssohn, it turns out, was hardly the first Jewish parent, and certainly not the last, to shake his head in disbelief as his children looked elsewhere for moral and communal sustenance. How, then, to ensure that the kids of today would share their parents’ and grandparents’ fidelity to the Jewish collective?

In the 18th century, as in the 21st century, there were nearly as many answers as Jews. For Isa Kapp, writing in Commentary magazine in 1949, the way to a Jewish child’s heart ran through the pages of a whopping good yarn. Jewish children’s books, she chided, should concern themselves less with the constraints of the calendar (“I must hurry, hurry, hurry/What a worry, worry, worry/See the sun has almost set/I’ve no Sabbath candles yet”) and instead search out adventure and possibility and “boundlessness.” If the Jewish child is to “reach his adult Jewishness on terms suited both to his own nature and to the Jewish tradition itself,” Kapp argued, he must have books that engage his imagination: Jewish versions of Andersen and Grimm, Kipling and Milne.

For Aunt Fanny, the fictive author of “Junior Jewish Cook Book” (Ktav, 1956), food was the ticket. Much like other postwar cookbooks intended for young hosts and hostesses, this sunny text sought to introduce Jewish boys and girls to the joys of cooking, especially when it came to preparing Jewish holiday fare. Drawing on American standards such as hamburgers (which, in deference to the kosher dietary laws, she dubbed “meatburgers”) and on culinary conceits such as tomato flower salad (a dish trotted out in floral celebration of Shavuot), Aunt Fanny placed the comforting rhythms of the kitchen at the very center of the Jewish child’s universe. “We hope you have lots of fun cooking,” she enthused.

For yet others, what brought young Jews into the fold and kept them there was not fun or fantasy but responsibility. Pinning their hopes on “junior congregation,” or what were also known as children’s congregations or services, the community’s leaders sought to create a cohort of knowledgeable and committed shul-going Jews, who, once they were older, would continue to fill the pews and rally round the Jewish flag, sustaining synagogue life. “The educated American Jewish youth of today is the intellectual Jew of tomorrow,” said Louis Horowitz, one of the founders of Brooklyn’s Ashford Street Talmud Torah Junior Congregation, in 1936, on the occasion of its 19th anniversary. “It is his duty to uphold the cultural traditions of his race by close communion with the… synagogue.”

An outgrowth of the modern, Talmud Torah movement of the 1910s and ’20s, which sought, in the name of relevance and topicality, to apply the very latest notions of pedagogy to the study of Hebrew and Judaic traditions, junior congregation provided “young Jews and young Jewesses” with the hands-on opportunity to conduct their own religious services on Saturday mornings and the occasional Jewish holiday. Transcending denomination, the innovation later spread to individual congregations across the nation, from Brooklyn’s Temple Petach Tikvah, which was affiliated with the Conservative movement, to Cleveland’s Euclid Avenue Temple, which was affiliated with Reform Judaism. Before long, no proudly modern synagogue or temple was without a miniaturized, scaled-down version of itself.

In a space all their own, far away from parental scrutiny, the members of “youthful Israel” presided over an abridged and highly edited service, heavy on congregational singing, light on Torah. In their own company, they learned how to chant the prayers, manage time, play well with others, strut their stuff and try their hand at creating community. As Libbie Braverman, the educational director of the Euclid Avenue Temple, put it in the 1940s, drawing on the very latest social science lingo, the point of junior congregation was to enable the child to “enjoy a worship experience adapted to his own apperceptive level.”

Specially designed prayer books made sure of it. Some were handsome affairs, the handiwork of Bloch Publishing Co., for example. Others were far more amateurish, the product of the mimeograph machine. Some liked to say that they “paraphrased and abridged where it was necessary;” others were determinedly experimental, replacing the age-old text of the Torah with contemporary poetry and responsive readings. Whatever form they assumed, these prayer books gently eased young Jewish children into the culture of the synagogue, making them feel a bit more at home within its precincts.

Extremely proud of those American-born youngsters who officiated at and participated in junior congregation, the Jewish community’s leaders photographed them.Or, more precisely, they staged a series of photographs that captured them in action: boy cantors in full ritual regalia posing with a choir composed of other little men like themselves; the passing of the Torah from small hand to small hand; girls in middy blouses and boys in knickers and caps practicing synagogue melodies.

Though grainy and out of focus, these images, which took pride of place in the Jewish Communal Register of New York City 1917-1918, a two-volume compendium of facts, graphs and articles about the state of American Jewish life, underscored both the novelty and the long-range significance of the enterprise. Behold the future.

In the years that followed, the junior congregation entrenched itself even more deeply within American synagogue life. More than a century later, it’s still going strong. The prayer books of yesteryear have given way to new iterations, as well as to certificates that kids can hang on their walls — or, more likely still, the walls of their grandparents — attesting to their ongoing participation in junior congregation. And for those young American Jews of today who need even more coaxing, there’s this: “9 Ways to Create a Great Junior Congregation Service.” A catalog of helpful hints and incentives written by Edwin R. Frankel, the ritual director of Agudas Achim of Bexley, Ohio, it incorporates the language of self-help (“Give participants a sense of ownership of the service”), aesthetics (“Use prayer posters with words or pictures to focus”) and food (“Offer bagels…as an ongoing motivation for attendance”) to drum up support.

Boy cantors and little Jewesses may have passed from the scene, but keeping their latter-day descendants engaged in American Jewish life remains both a challenge and an opportunity. Graduates: Take note. Your moment awaits.

Of Boy Cantors and Little Jewesses