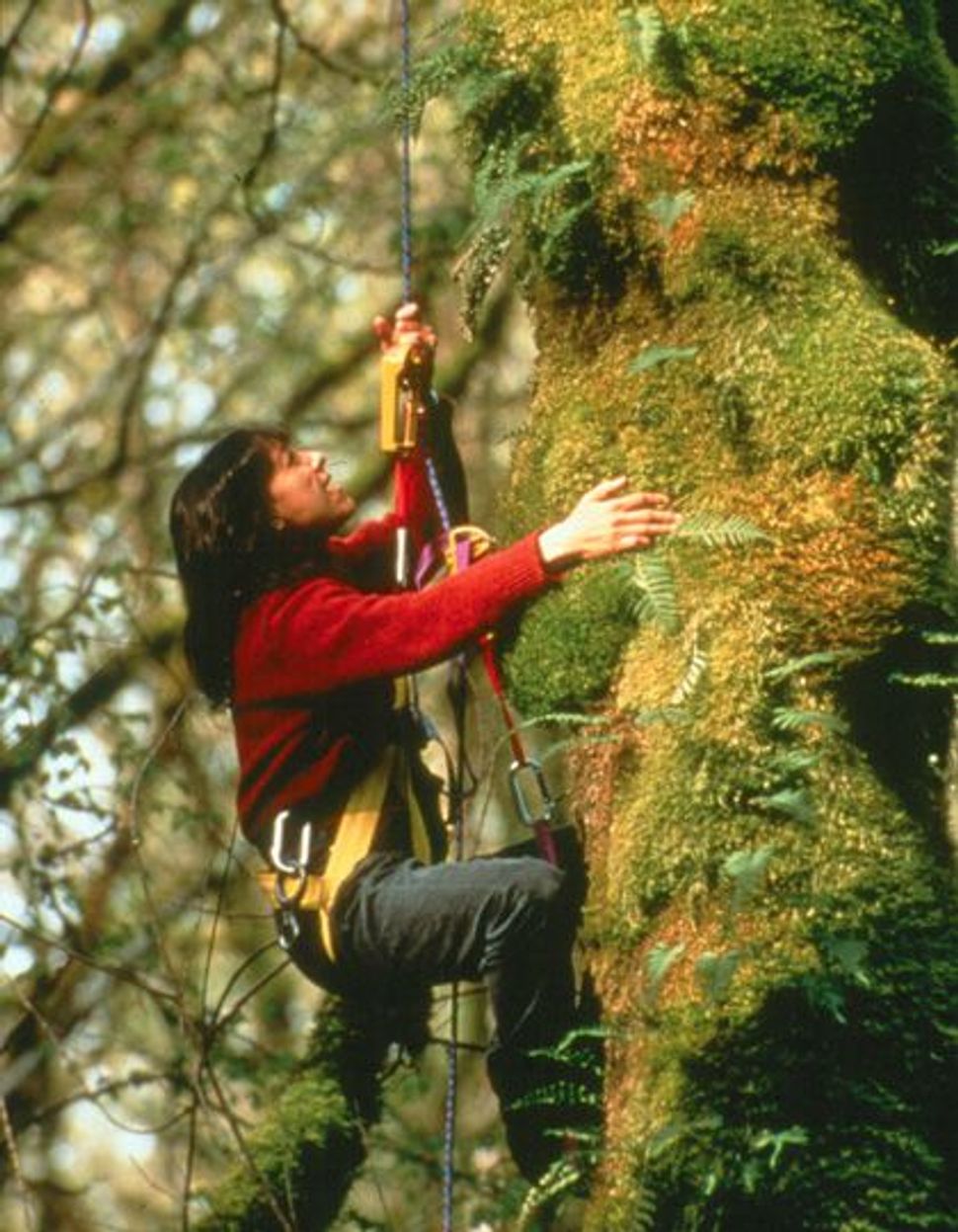 Getting Rooted: Nalini Nadkarni, a forest ecologist and professor, speaks at synagogues, church- es and Buddhist temples about science, spirituality and a special love of trees. Image by COURTESY OF NALINI NADKARNI

During a Sabbath evening service one Friday in February, Seth Goldstein and his 9-year-old son, Ozi, sat with their eyes closed in the synagogue in Olympia, Wash., where Goldstein is the rabbi. From the bimah, Nalini Nadkarni asked congregants to imagine a tree that was important to them. She described the maple trees that had lined the driveway of her childhood home. Amid the confusion of growing up, they had been a refuge. She would climb their limbs with a book and a snack, and spend entire afternoons up in the air. 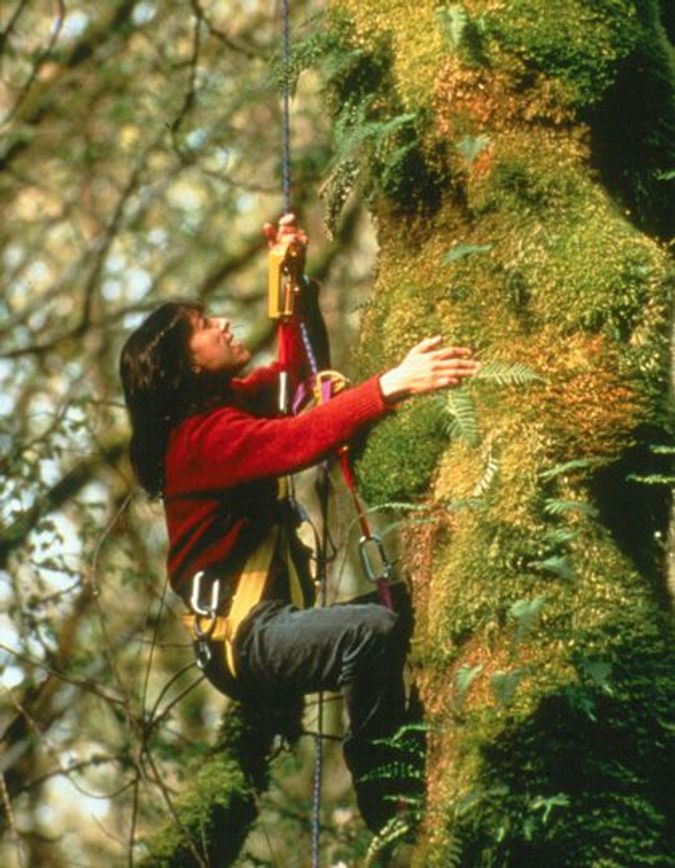 Getting Rooted: Nalini Nadkarni, a forest ecologist and professor, speaks at synagogues, church- es and Buddhist temples about science, spirituality and a special love of trees. Image by COURTESY OF NALINI NADKARNI

Nadkarni isn’t a rabbi. She isn’t a member of this congregation, Temple Beth Hatfiloh. She doesn’t practice any religion at all, actually. She is a forest ecologist and professor at the nearby Evergreen State College.

But Nadkarni loves trees with an almost religious zeal, and after more than three decades of meticulous scientific research, she told the congregation, she has come to realize that science is not enough to safeguard trees.

“I care deeply about trees with my heart,” she said. “More and more, I am interested in protecting them, perhaps because I remember their protection of me as a child. So I initiate discussions about trees whenever and wherever I can. I find places of worship help me learn and teach about [them].”

In May, Nadkarni’s outreach work earned her the prestigious National Science Board Public Service Award, which honors people who have made significant contributions to the public understanding of science. In 2008, she published the book “Between Earth and Sky: Our Intimate Connections to Trees” (University of California Press).

That night in Olympia, she simply gave a sermon. She has done this more than 30 times around the Pacific Northwest, in synagogues, churches of various denominations and Zen Buddhist temples, in hopes of raising awareness about trees and leading people to take action to protect them.

The Torah, she told the congregation, mentions trees 328 times. Ever the scientist, Nadkarni divvied up the mentions into statistics. (Once, during a sermon at a Universalist church, in Tacoma, she handed out a bar graph titled “Bible References to Trees and Forests.”) Thirty percent are symbolic references, as when, in Chronicles, “[Ahaz] offered sacrifices and burned incense at the high places on the hilltops and under every spreading tree.” Twenty percent, she said, are analogies to life and God, as in the Song of Songs, which reads: “Like an apple tree among the trees of the forest is my lover among the young men. I delight to sit in his shade, and his fruit is sweet to my taste.”

When Nadkarni visited Temple Beth Hatfiloh, the sanctuary was more than twice as full as at a typical Sabbath evening service.

“Everybody was really moved by [her sermon],” Goldstein said. “For those that are nonscientific, we look at Judaism and Jewish teachings about the natural world and almost rediscover the natural elements of the holidays and elements of kashrut. She was coming at it from the other direction. She’s lived her life in science. To take her experience in nature and connect it to spirituality and what religions have to say about that was wonderful.”

Nadkarni came to Beth Hatfiloh, she told the congregants, “as both an insider and an outsider to Judaism.” Born to an Orthodox Jewish mother from Brooklyn and a Hindu father from India, Nadkarni was raised Hindu, as were her four siblings. The family’s home had a shrine to the elephant-headed god, Ganesha. But “on the shelf below Ganesha was a menorah that we’d light around Hanukkah,” she said.

With a small frame and a giant laugh, Nadkarni is constantly in motion, germinating ideas, talking to strangers, looking, listening, taking notes. As a graduate student, she was one of the first scientists to discover and begin to catalog the complex ecosystems that grow hundreds of feet in the air, in the canopies of the rain forests throughout the world.

The bumper stickers that are ubiquitous in and around Olympia — “Got Oxygen? Thank a Tree” — are printed and distributed by the International Canopy Network, which Nadkarni founded.

Her sermons began in 2001, when Nadkarni received a grant from the Guggenheim Foundation’s Research Ambassador Program. The grant was meant to address the question, “What are the obstacles that prevent scientists from reaching out to nontraditional audiences?”

Nadkarni said: “I decided to use myself as a guinea pig. How far outside academia can we go?”

She now collaborates with the Washington State Department of Corrections to bring ecology and science projects inside state prisons. She brought a spoken-word artist to local schools to help children write rap songs about nature. She also brought the San Francisco dance troupe Capacitor with her to her research site in Costa Rica to choreograph a dance about the rain forest, which the dancers then performed all over the United States.

“I love and respect and honor nature so much that if it celebrates science and makes people more aware of its importance — in a church, in a dance theater or at a scientific conference — I’m there,” she said. “Science is just something that’s stuck in my craw.”

Her work in faith communities helps trees stick in the craws of others, too.

When father and son were driving home that night, Goldstein asked Ozi what tree he had imagined when he closed his eyes. Goldstein himself had pictured the big old willow tree in the front yard of their house. When he and his wife moved to Washington state from the East Coast, Goldstein said, the welcome provided by that tree was one of the reasons they bought their house.

It turned out that Ozi had thought of the same tree. “For me, and for him, it connects him to this place and where we live. It gives us a sense of home,” Goldstein said.