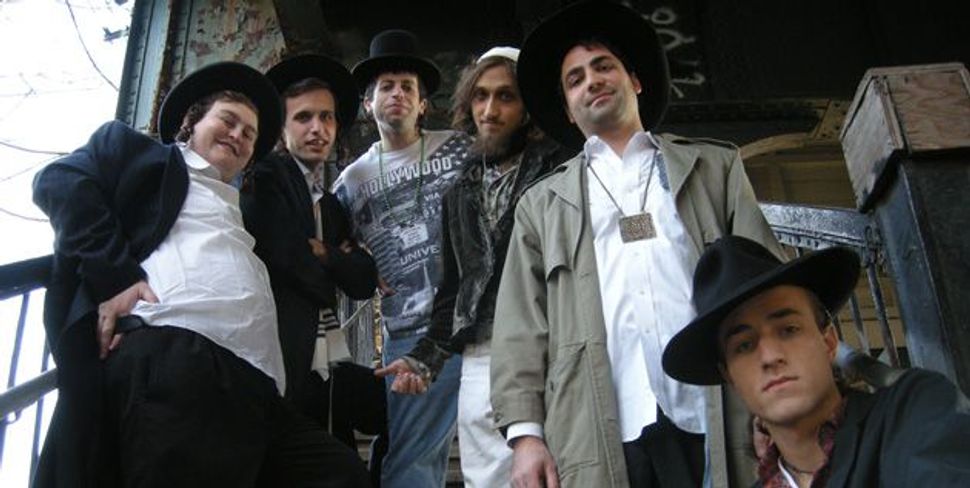 Not in Verona Anymore: Cast members from ?Romeo and Juliet in Yiddish.? Image by EVE ANNENBERG

In 2006, film director Eve Annenberg stumbled onto Chulent, a weekly gathering of young, alienated Orthodox and formerly Orthodox Jews in Manhattan. She had no idea that she was about to embark on one of the most improbable movies of her career.

Four years later she is sending DVDs of her feature-length motion picture “Romeo and Juliet in Yiddish” to film festivals, agents and famous literary figures.

“This movie will get seen,” Annenberg vowed after a screening in her Manhattan high-rise apartment. “It might not make any money but everyone will see it.”

In Annenberg’s retelling of Romeo and Juliet, the character of Friar Laurence is transformed into Rabbi Laurence. Instead of coming upon what he assumes is a deceased Juliet in a tomb, Romeo lays eyes on her in a tahara shtibl.

It seems incongruous, at times, to hear Yiddish coming out of actors’ mouths as we see Shakespearean English in the subtitles on the screen. About 65% of the movie is in Yiddish.

The film not only includes the traditional Shakespearean story line — altered so that Hasidic sects resembling Satmar and Lubavitch substitute for the warring Montague and Capulet clans — but a story within a story: A substantial portion of the plot mirrors the real-life misadventures of its two stars, young Hasidim who left their communities and ended up on the wrong side of the law before they ended up in front of the camera. Neither had ever watched a movie before, let alone acted in one, before they left the Satmar orbit.

“Romeo and Juliet in Yiddish” was initially shot on Annenberg’s credit card in Brooklyn last summer and fall. Halfway through the shooting, funding became available. Annenberg declines to identify her backer.

Some scenes were filmed in a warehouse in East New York, others on the streets of Williamsburg, where local Hasidim tried to interrupt the production. To smooth things over, the cast fibbed and told them that Annenberg was filming a music video for a Hasidic artist.

The famous “Wherefore Art Thou?” soliloquy was filmed on a fire escape.

At first, Annenberg tried working with a 1939 translation of the Shakespearean classic obtained from YIVO, but ultimately she decided to retranslate the entire work with the help of her newly recruited Hasidic actors.

“While we translated, she asked us stories about our lives and she was fascinated with where we came from and our journey,” recalled Lazar Weiss, 25, a former Satmar Hasid who plays Romeo. “When we finished translating the Shakespeare story, she came [to us] with a whole new script, which was the story of our lives.”

“I was, like, flipping out,” chimed in Mendel Zafir, also a Satmar dropout and the actor who plays Benvolio in the film.

Juliet is played by Malky Weiss, another former Satmar who had no acting experience.

Annenberg has Romeo and Benvolio living in a rented truck, just as Weiss and Zafir did in their early days outside the Satmar community. They made shabbes in the truck, unplugging the battery on the day of rest.

“We were doing traveling like the real Hasidishe rabbis used to do in the olden days,” quipped Weiss.

Some of that traveling involved smuggling marijuana into the United States, Weiss and Zafir said.

They said they also committed credit card fraud and swindled airlines by falsely claiming their baggage had been stolen, a scene that opens “Romeo and Juliet in Yiddish.”

“Some people call it scams. We call it business,” said Weiss.

Annenberg refers to their experience as “youthful high jinks.” She noted that it’s not easy to walk out of your culture and leave your family at the age of 15 to live on the street in Brooklyn, unable to speak English.

“I think they are beautiful and brilliant and brave,” Annenberg said. “I am their biggest fan.”

Someone less than enamored, no doubt, of the young Hasidim is the criminal defense lawyer who represented them in court.

Weiss said that he and Zafir stiffed their attorney for $20,000. “He’s probably still looking for us,” Weiss said. “We hope to pay him one day.”

Annenberg convinced Eve Shapiro, an acting teacher at Juilliard with whom she had studied, to coach the first-time actors.

Shapiro, who says she trained British actors Alan Rickman and Jonathan Pryce at the Royal Academy of Dramatic Art in London, had been tipped off to the shady past of her charges but was nevertheless charmed by Weiss and Zafir.

“They have charisma, and that’s something you cannot teach,” Shapiro said. “You either have it or you don’t. Their acting was just being themselves. They were who they were. And I never tried to do anything to change that because it wouldn’t have worked.”

In the film, Annenberg portrays a nurse named Ava who recruits the Hasidic bad boys to help her with a grad school project to translate “Romeo and Juliet” into Yiddish.

In a sense, she played herself. When she’s not making movies, Annenberg works as a nurse in inner-city emergency rooms to pay the rent.

There has been plenty of drama for real in Annenberg’s life during the last year. She not only finished “Romeo and Juliet in Yiddish” but underwent cancer surgery and buried her mother.

The film was finished just days before its first public screening, in front of a sellout crowd at the Berlin Jewish Film Festival on May 2.

Annenberg, Weiss and Zafir were on hand when the movie won the festival’s Audience Favorite award.

The San Francisco Jewish Film Festival rejected “Romeo and Juliet in Yiddish,” but the film was solicited for upcoming Jewish film festivals in England, Australia and Boston.

Annenberg said she is holding off on plans to screen it in New York and Los Angeles until she hears whether the film makes it into the Toronto Film Festival. She is leaning toward distributing “Romeo and Juliet in Yiddish” via iTunes or YouTube.

Rabbi Isaac Schonfeld, who coordinates the Chulent gatherings and who plays both Rabbi Laurence and an ambulance driver in the film, predicted it will be seen at least surreptitiously in the Orthodox world.

Before shooting began, word of the movie made its way to Circus Tent, an Orthodox Jewish blog that calls itself “the big top for all things heimish.” The Hasidic dropouts-turned-actors were berated for drinking overpriced coffee and associating with an “artsy type lady.”

In the meantime, Weiss and Zafir say they have gone legit. They have a business putting up posters in Orthodox neighborhoods in Brooklyn.

They speak of acting in more movies, a prospect dangled before them by German and Israeli filmmakers at the film festival in Berlin.

Annenberg wants to make another movie with her Hasidic acting ensemble. She is in the early stages of developing two other film projects with Weiss and Zafir, who got producer credits on “Romeo and Juliet in Yiddish.”

What price a Yiddish “Waiting for Godot”?

Jon Kalish has been heard on National Public Radio for 30 years.