A Sukkah Bound For New York 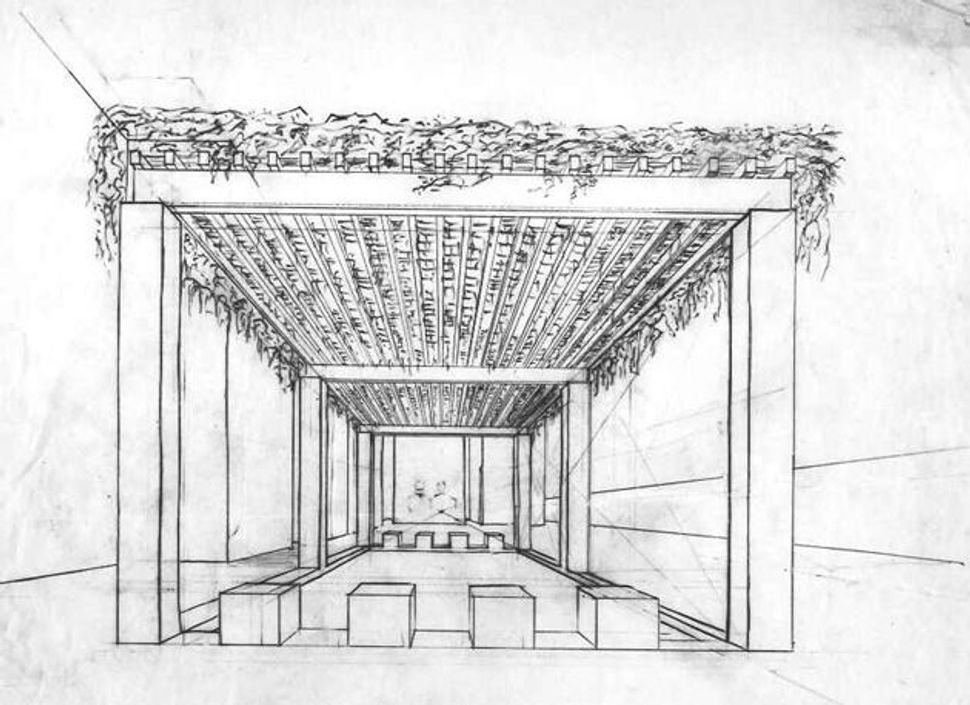 An unrealized sukkah design by Philadelphia architect Louis Kahn. (Courtesy of Louis I. Kahn Collection, University of Pennsylvania and the Pennsylvania Historical and Museum Commission)

New Yorkers have gotten used to the celebration of Jewish holidays in public places. The 32-foot-tall Hanukkah menorah lit regularly at Brooklyn’s Grand Army Plaza isn’t as tall as the spires of nearby churches (or hotels), but it is still a pretty assertive statement of Jewish presence and pride. Once the city opened the door to such displays of religious observance in a public space, we knew it wouldn’t be long before other celebrations followed. And in fact, it is the holiday of Sukkot that will be celebrated in a public space as “Sukkah City: New York City” — the brainchild of Joshua Foer — launches a design competition for innovative sukkahs (literally: booths), for which registration closes on July 1.

Traditionally, rabbis have discouraged building in public places in order to lessen the risk of unwanted intrusion or destruction. But Foer is using the competition process and public display to combine the explicit missions of the organizers — Union Square Partnership and Reboot — to improve “the district’s continued growth and success” while making Jewish “culture, rituals, and traditions we’ve inherited… vital and resonant in our own lives.”

“Sukkah City: New York City”— which has attracted a great deal of attention from the architecture and design world — will reimagine the ancient tradition of booth building through the development of “methods of material practice and parametric design, and propose radical possibilities for traditional design constraints in a contemporary urban site.” Twelve finalists will be selected by a panel of celebrated architects, designers and critics, and their designs will be constructed in Union Square Park from September 19 to September 21. The winning design will be chosen as the City Sukkah, to stand, starting on September 22, for the requisite seven days of the harvest holiday. The setting is especially appropriate, since the sukkah will arise amid the bounty of the square’s produce market.

The sukkah may be said to be the first truly Jewish building, as it was the type of structure utilized by the Israelites after the Exodus, when they forged their identity as a people. According to the Bible, sukkahs were the dwellings used by the Israelites when Moses first brought them the Torah and made them Jews.

Mark, on the fifteenth day of the seventh month, when you have gathered in the yield of your land, you shall observe the festival of the Lord…. On the first day you shall take the product of hadar trees, branches of palm trees, boughs of leafy trees, and willows of the brook…. You shall live in booths seven days… in order that future generations may know that I made the Israelite people live in booths when I brought them out of the land of Egypt. (Leviticus 23:39, 42,43)

The organizers’ aspirations seem of biblical proportions, too, since traditionally the festival of Sukkot was a pilgrimage holiday when Judean Jews would ascend to Jerusalem and build their sukkahs in the holy city. Surrounding the Temple Mount, they recalled the time described in the Exodus when the tribes assembled and dwelt in the proximity of the Tabernacle. The sukkah was an early form of temporary housing — a Jewish experience that resonates across Jewish history, from Sinai to post-Holocaust Palestine.

The idea of architect-designed sukkahs is neither new nor common. Twentieth-century Reform synagogues — where most Jewish architectural innovation took place — downplayed the significance of the fall holiday, and most major synagogues built in the United States were as ready to dispense with the sukkah as they were with the traditional mikveh, or ritual bath. Along with his entire proposal, Louis Kahn’s design for a permanent sukkah for Orthodox congregation Mikveh Israel in Philadelphia was never realized. That open structure was a central link between more substantial parts of an intended synagogue-museum complex. It would have provided a gardenlike pavilion that would be transformed into a sukkah once a year.

Kahn’s idea of maintaining the frame of a sukkah for other uses had a precedent: Some European synagogues maintained permanent sukkah frames year round. For example, the 19th-century synagogue sukkah in Modena, Italy, still serves as a glass-roofed foyer. Last year, artist Allan Wexler was awarded the Henry J. Leir Prize for his Gardening Sukkah at the Jewish Museum’s “Reinventing Ritual” exhibition, with a new take on the idea of sukkah recycling, using a sukkah that doubled as a gardening shed. In 1994 and 1995, Chicago’s Spertus Museum sponsored a sukkah exhibition with innovative and expressive entries from local architects, including Carol Ross Barney and Stanley Tigerman (both of whom have very recently designed important Jewish projects). The Chicago booths were built full-scale but not publicly — or at least on public space — even though Grant Park is located just across from the museum.

The current competition is more ambitious about transcending boundaries between private and public, and that seems appropriate for the humble sukkah, since the building form itself is transitional and transcendent. It is one of the oldest building types to have a design and construction carefully regulated by scripture and the Talmud. Yet, by intent, the sukkah is the most temporary of structures. It joins the rigor of rules with the happenstance of a happening. Like a Habitat for Humanity project, the sukkah is as much about building community as it is about erecting a solid roof. Jewish tradition makes it clear that regardless of social standing, everyone should build the sukkah. Construction should start immediately after Yom Kippur, because a chance to perform a mitzvah should not be postponed.

Though it can be free-standing, the sukkah is most often an extension built onto an existing house or other building, utilizing a least one wall or fence for one of its fixed sides. It’s a transition from the inside to the outside just as the festival of Sukkot celebrates transition, beginning with a cosmic shift from the closing Gates of Heaven in the Neilah service at the end of Yom Kippur and ending with the commencement of construction of the simple sukkah a few hours later.

Most of the rules regarding building a sukkah derive from the Talmud, which dedicates an entire tractate to the festival. The ancient rabbis left detailed instructions about those aspects that make a sukkah valid, but were mostly mute on how to achieve that. For designers, it is this combination of specificity and freedom that offers a creative challenge.

Size matters, but not too much. A sukkah must be large enough to contain a man’s head, most of his body and his table. This can lead to a variety of results, including — for the poor and lonely — a small extension from an upper-story window. Since we are commanded to eat meals in them, sukkahs are most often built family size, just big enough to allow all regular occupants of the household, plus a few guests, to enjoy a comfortable meal together. Synagogues, too, erect large sukkahs for communal eating. Manhattan’s Lincoln Square Synagogue, for example, builds a sukkah (for many years decorated by artist Tobi Kahn and others) that seats 200 and is used by as many as 3,000 people during the festival week. It’s permitted to build long or wide, just not so high that the inside seems like outdoors.

The rules concerning the roof are the most precise, for the overhead shelter carries the greatest symbolic significance. A valid roof must be made from natural material that has grown in the ground but is detached from its roots, such as branches or reeds that have been gathered by human hands and purposefully fashioned in celebration of the festival.

The roof must provide more shade than light, a reminder of divine protection in the desert, but at the same time, the roof must be open enough to allow rain to penetrate, ensuring that the dwelling will be as vulnerable as were the Israelites in the wilderness. Preferably occupants should be able to see the night stars, which is one of the reasons that it makes the sukkah posul (invalid) if it is built underneath tree branches, an overhanging roof or balcony, or the protruding roof of another sukkah. “Sukkah City” builders need remember that if building on grass, there should be a floor to avoid spills that may not be cleaned on the Sabbath or Festival Days.

Sukkahs may not be too temporary. Lean-to’s are excluded, since the sukkah must have at least three walls and sufficiently accommodate sleeping and eating throughout the week of the festival. The walls of the sukkah may be made of any material, but must be sturdy enough to withstand an ordinary wind. Stability is important — whether the sukkah is built on the ground, on a ship or even atop a camel. Traditionally, walls have been decorated in many different ways, but especially with fruits and vegetables signifying the season of harvest bounty. This is an area where artists can have a free hand and are increasingly experimenting with painted panels, textiles and other temporary decorations.

The sukkah juxtaposes sturdiness and vulnerability, design and construction — yet impermanence. These combinations and the collective celebration of both nationhood and wandering make the simple sukkah booth an emblem of the past and present Jewish condition.

Samuel D. Gruber is the Rothman lecturer in Judaic studies at Syracuse University and president of the International Survey of Jewish Monuments.

A Sukkah Bound For New York