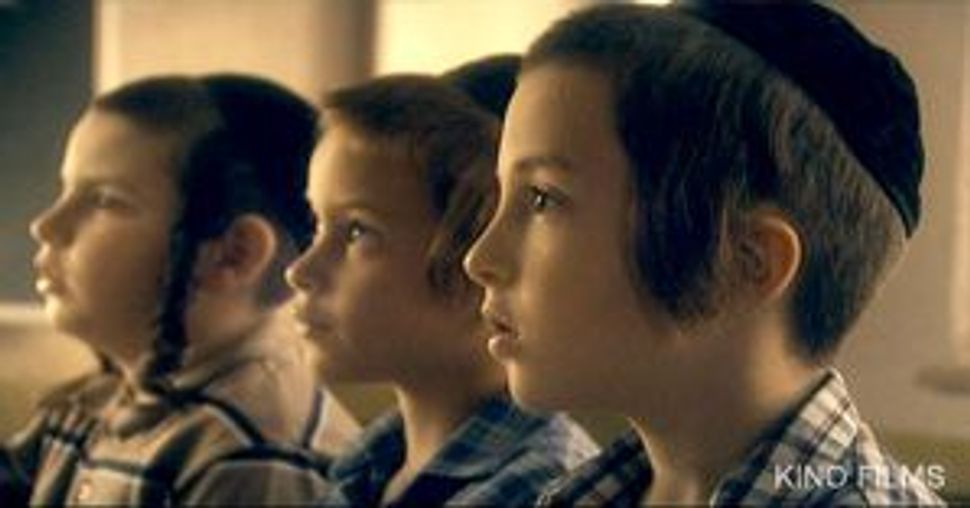 The Haredim, or ultra-Orthodox Jews, don’t go to the movies. This is partly on account of the silver screen’s abundant displays of what is known among these communities as pritsus — that is, sex and general profanity — but it is also because any such frivolous entertainment is considered “bittul-Torah,” a prohibited waste of precious time that ought to be devoted exclusively to sacred study. Moreover, since the destruction of the Temple, rabbinic law has banned all forms of nonreligious “celebration,” a prohibition whose strictest understanding includes both high and low entertainment, from opera and the theater to rock concerts and films. For these deeply pious Jews, fun is forbidden. 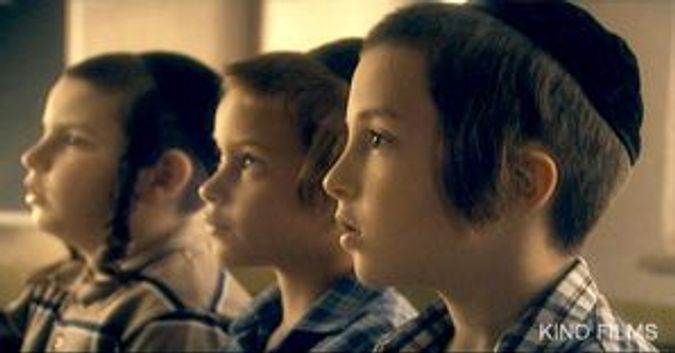 That the movie industry has contributed absolutely nothing to the knowledge of Torah is plainly evident. Worse still, those select films whose subject is the world of the fervently Orthodox have been awfully sloppy, if not downright warped, in their depictions of the rituals and realities of Haredi life, from badly botched blessings to poorly pasted peyes. Beginning back in 1982 with Robby Benson and Rod Steiger’s ludicrous performances in “The Chosen,” soppy Hollywood productions featuring the ultra-Orthodox — from Barbra Streisand in “Yentl” (1983) to Melanie Griffith in “A Stranger Among Us” (1992) — have tended to indulge in ridiculous romanticism. Their more recent Israeli counterparts, on the other hand, have mostly been absurd secularist polemics — including “Time of Favor” (2000) a “Torah thriller” depicting lunatic nationalist yeshiva bokhers on a mission to blow up the Al-Aqsa Mosque, and “Kadosh” (1999), an angry screed, about Orthodox misogyny, that just so happens to feature my all-time favorite cinematic distortion of Jewish law: a Haredi man wrapped in phylacteries and saying morning prayers on the edge of his bed while his wife lounges nearby in her lingerie. Consequently, in addition to saving themselves more time for studying Torah and mourning Jerusalem, the Haredi ban on movies has also brought the unintended benefit of sparing them the pain of seeing their traditions distorted and their beliefs reviled.

This all changed dramatically, however, with the appearance in 2007 of Israeli director David Volach’s stunning debut film, “My Father, My Lord” (the American title given to the Israeli original “Hofshat Kayitz,” meaning “summer vacation”). Not only is its depiction of Haredi society, the world of the “Lithuanian” yeshiva in particular, meticulously accurate, but Volach’s screenplay is also a sensitive dialectical discourse with the talmudic tradition, one that includes a serious — and, to my knowledge, unprecedented — engagement with major themes in medieval Jewish philosophy and mysticism, along with a searing critique of their misapplications in the contemporary Haredi world. I certainly cannot remember ever before rushing home from a screening to check talmudic sources to refresh my memory of an obscure medieval rabbinic debate about the meaning of certain biblical commandments. But this was precisely the effect “My Father, My Lord” had on me.

Volach’s screenplay breaks all kinds of new ground in cinematic history, not least for being the first feature film written (and directed) by a classically trained talmudist. An alumnus of Israel’s most prestigious Haredi rabbinical academy, the storied Ponevezh Yeshiva of Bnei Berak, Volach was reared, along with his 19 siblings, in the most austere and learned sector of Israel’s Haredi society, Jerusalem’s yeshiva-centered Misnagdic community. He finally broke with Orthodoxy at 25, moving to secular Tel Aviv to study film. In his 13th year since being born again as a secular Jew, the 37-year-old rabbinical renegade received a deliciously subversive “bar un-mitzvah” gift when Robert De Niro personally presented Volach with the Tribeca Film festival’s 2007 Founder’s Award for best narrative feature film.

Sparingly and beautifully shot, inspired as it is by Volach’s deliberate emulation of the meticulous work of Polish director Krzysztof Kieslowski, “My Father, My Lord” features a compelling portrayal of a Haredi patriarch (aptly named Reb Avrohom) by veteran secular Israeli screen star Assi Dayan (son of army general Moshe Dayan). The film tells the heartbreaking story of an ill-fated middle-aged Haredi couple and their only child, Menachem (Elan Griff), whose birth is clearly regarded by his mother, Esther (Sharon Hacohen Bar), and father as a miracle from God, akin to the Lord’s gift of Isaac to the aging biblical Matriarch, Sarah. In presenting Menachem’s story, Volach makes brilliant use of the famous narrative that depicts Abraham’s willingness to offer his son as a sacrifice to God. In a particularly haunting scene from his classroom, in which plastic magnets representing the actors in that biblical drama are posted on the blackboard, young Menachem is assigned the sacrificial ram that ended up on Abraham’s altar in Isaac’s stead, foreshadowing the film’s tragic trajectory.

While the allusion to the biblical binding of Isaac is among the film’s most familiar and accessible references to canonical Jewish sources, and has thus been the one most (usually the only one) noticed by the critics, what Volach is more deeply interested in is portraying how the provincial chauvinism of the Haredim and their rigidly perfunctory approach to the Torah’s commandments not only deadens the searching soul of a young pious boy but also ultimately destroys the boy and shatters his family.

Throughout the film, Reb Avrohom engages in theological interventions into young Menachem’s innocent encounters with the natural world. Walking home from school one day, Menachem beholds a devoted and clearly distraught Alsatian shepherd forcibly separated by paramedics from his mistress, as she is loaded into the back of an ambulance. That evening, Menachem asks his father if animals have souls. “No!” Reb Avrohom impatiently barks. “No souls, no world to come, no mitzvot, no sins, nothing at all! They’re just animals.” In a complementary scene, Menachem and his classmates are powerfully drawn to the dove’s nest on a windowsill of their heder, mesmerized by the tenderness of the mother bird toward her foundlings. In the film’s most repercussive and religiously loaded scene, Reb Avrohom rushes to shoo away the mother, in fulfillment of the biblical imperative of Shiluach Ha-Ken that prohibits taking eggs or chicks from a nest so long as the mother is still present, requiring rather that “You must first send off the mother and only then take the offspring, so that you may fare well and have a long life.” (Deuteronomy 22:7) But as Reb Avrohom has no actual use of the chicks, they simply remain bereft in the nest, while he prays nearby, beseeching God for the promised length of days promised by the Torah. The entire purpose of this commandment, at least as understood by the classical Jewish philosophical tradition — namely, to show mercy to all of nature’s mothers — is blindly and blissfully ignored by Reb Avrohom. As elsewhere in the film, Volach is here questioning the strictly positivist approach to the commandments that so radically isolates their adherents from the rest of God’s creations.

Volach is, in such scenes, not only depicting the soul-less, and often mindless, approach to Jewish law that has overtaken the Haredi community; he is invoking classical Jewish theological disputations about whether the rationales for the Torah’s commandments ought to be explored rationally, or if these rituals should be observed simply out of unquestioning fear of heaven. Put another way, is a commandment like Shiluach ha-Ken to be understood as a manifestation of Divine compassion for all mothers of every natural species, as Maimonides argued, or performed in a deliberately blind display of obedience to God’s will, as his obscurantist critics insisted?

Reb Avrohom’s rather bewildering act of scaring away the mother bird, absent any interest in, or need of, her eggs and chicks, is a clear indicator of his rejection of the rational and utilitarian Maimonidean approach to the Torah’s precepts, according to which the purpose of Jewish law is to enhance the Jews’ encounter with the world. Volach’s depiction of the narrow and entirely perfunctory observance of Jewish law dramatizes a general detachment and alienation from the natural world among the Haredim, as well as their conviction that the entire universe exists solely for the sake of their Torah study and ritual observance. The chauvinism of this weltanschauung is made explicit in a scene depicting one of Reb Avrohom’s yeshiva lectures, in which he explains how everything that everything in the universe — from amebas and dogs and cats to nonobservant Jews and non-Jews — exists only in order to enable the pious Jews to study Torah; conversely, were Torah study to cease for even one instant, the entire universe would revert to the chaos that preceded Creation.

The “summer vacation” of the film’s original Hebrew title refers to the family’s trip to the Dead Sea. While the Talmud commands a father to instruct his son in how to swim — in addition to teaching him Torah and a trade — Reb Avrohom’s numbingly parochial worldview is manifest when all he requires of Menachem before they approach the water is to know which blessing the Talmud prescribes on “seeing the Great Ocean.” In the Haredi imagination that Volach’s script repeatedly excoriates, the seas exist only so that Jews might have the opportunity to recite that particular blessing.

The scene, like nearly all others, works on two levels — the deeper and more satisfying of which requires significant Jewish knowledge. And so, while the beautiful, if agonizing, personal story it tells will move even the most Judaically uninformed viewers — as evidenced by the critical acclaim it enjoyed at last year’s Tribeca Film Festival — the sad irony about “My Father, My Lord” is that only those who have devoted significant time to advanced Torah study are likely to catch its many deeper, subtler references to classical rabbinical texts. The audience that would be most fully rewarded by Volach’s work, consisting of yeshiva-educated Haredim, is the one least likely ever to see it.

Allan Nadler is professor of religious studies and director of Jewish studies at Drew University.