Rivers Run Through the Bible Lands 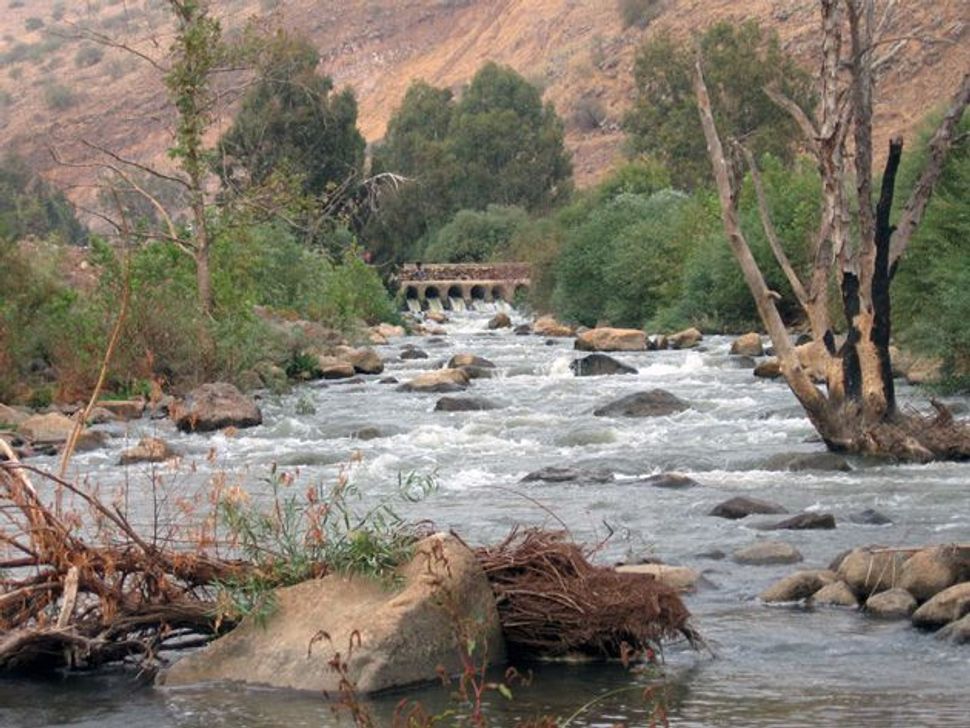 ?Yarden Harari?: The Jordan is one of four ?yar? rivers in the region. Image by MAGLANIST AT WIKICOMMONS

Bill Morris writes that he has been “struck by the coincidence” of three rivers that flow partly or wholly through Israel, or along its borders, having names that start with the same syllable: the Jordan, or Yarden in Hebrew; the Yarmuk, an eastward-flowing tributary of the Jordan that joins it south of the Sea of Galilee, and the Yarkon, which flows westward to the Mediterranean from the mountains of Samaria, running through what is today northern Tel Aviv. Noting that in the Bible, the name of the Nile is Ye’or, Morris asks:

Is this the origin of the syllable yar- in the three rivers? Were the rivers named by early Hebrews carrying bits of Egyptian in their Hebrew language? Were they named by the Egyptians prior to the Israelite conquest of Canaan, back when the latter was under Egyptian domination? Or were their names retained from an even earlier period? And if so, could it be that there was a pre-Semitic population in Canaan that spoke a language akin to Egyptian?

All these speculations are possible. Mr. Morris is right that in a semi-arid country that does not have many rivers, the syllable yar- in three of them (and if we add to our list the Yabok, another tributary of the Jordan south of the Yarmuk, in four) calls for an explanation. There’s just no certainty what this is.

Let us begin with the longest and best known of these rivers, the Jordan or Yarden. The etymology most commonly given for it is already supplied by the talmudic tractate of Bekhorot, which parses Yarden as yored dan, “the Dan descender.” (Besides being the name of the biblical tribe that inhabited the area, Dan was the name of an Israelite town in the far north of Canaan and of one of the streams that meet there to form the Jordan’s headwaters.) Many modern scholars think that the yard- of Yarden indeed comes from the Hebrew verb yarad, to descend, since the Jordan plunges in its 127-mile course from some 100 feet above sea level north of the Hula Valley to 1,300 feet below upon reaching the Dead Sea.

The Yarmuk, the Yarkon and possibly the Yabok might have similar etymologies, with the “d”- and even the “r”-sound having been assimilated to the following consonant. True, not only does this theory fail to account for the final syllables of Muk, Kon and Bok, which are not known place names like Dan, but it also suffers from the fact that the lazily flowing Yarkon has a very mild gradient. Perhaps, though, in prebiblical Hebrew, yar- or yard- signified any river at all. It is noteworthy in this regard that the Arabic verb warada, a cognate of yarad, means “to reach a source of water,” which makes sense when you realize that water, whether a river, spring or well, is generally lower than its surroundings.

This is one theory. Mr. Morris’s, which has been proposed by others before him, is a second. The biblical name of the Nile, Ye’or, comes from the river’s Egyptian name of Iro, which has been connected to the ancient Egyptian word ar, or aur, “black,” because of the dark color given the Nile by the large amounts of silt in it. (Another biblical name for the Nile is Shihor, which is probably related to Hebrew shaḥor, “black,” too.) Indeed, the earliest known reference to the Jordan, spelled in hieroglyphics as Ya-ar-du-ne, was found in a 13th-century BCE Egyptian papyrus text — the same century in which the Exodus from Egypt supposedly took place.

Still, it does not seem terribly likely that the Israelites, even if they sojourned first in Egypt, should have called Canaanite rivers by Egyptian names. Historically, rivers tend to retain their original, indigenous names long after the populations that gave them have been replaced by others. Think, for example, of how many American rivers — the Connecticut, Potomac, Shenandoah, Wabash, Susquehanna, Mississippi, Ohio, Missouri, Tennessee, etc. — have pre- Columbian Amerindian names. There is even a field called hydronymy that, pioneered by the German linguist Hans Krahe, attempts to map prehistoric populations by surviving riverine names.

Thus, yet another theory about the Jordan looks to pre-Semitic Indo-European populations of ancient Canaan, such as the Hittites, as the source of its name. In the original Indo-European languages, a root like don must have meant “river,” as is evidenced in such Central and Eastern European river names as the Danube, Don, Donets, Dnieper and Dniester; Yarden, it has been suggested, is Indo-European yor, “year,” plus don — that is, the river that flows all-year round. Homer mentions the Iardanos river, apparently in Crete, for which a similar derivation has been proposed.

And yet, what happens in that case to Yarkon, Yarmuk and Yabok? An Indo-European origin for Yarden does nothing to explain them. Perhaps, then, we have to look to other, more shadowy pre-Semitic populations of Canaan, such as the Hurrites, Hivites, Jebusites and Perizzites mentioned in the Bible, of whose ethnic affiliations little is known. (Hurrian, the only tongue spoken by any of these groups to have left documentary traces, has been linked to no other language or language family.) The hydronymy of the Jordan, the Yarmuk, the Yarkon and the Yabok is still up for grabs.

Rivers Run Through the Bible Lands