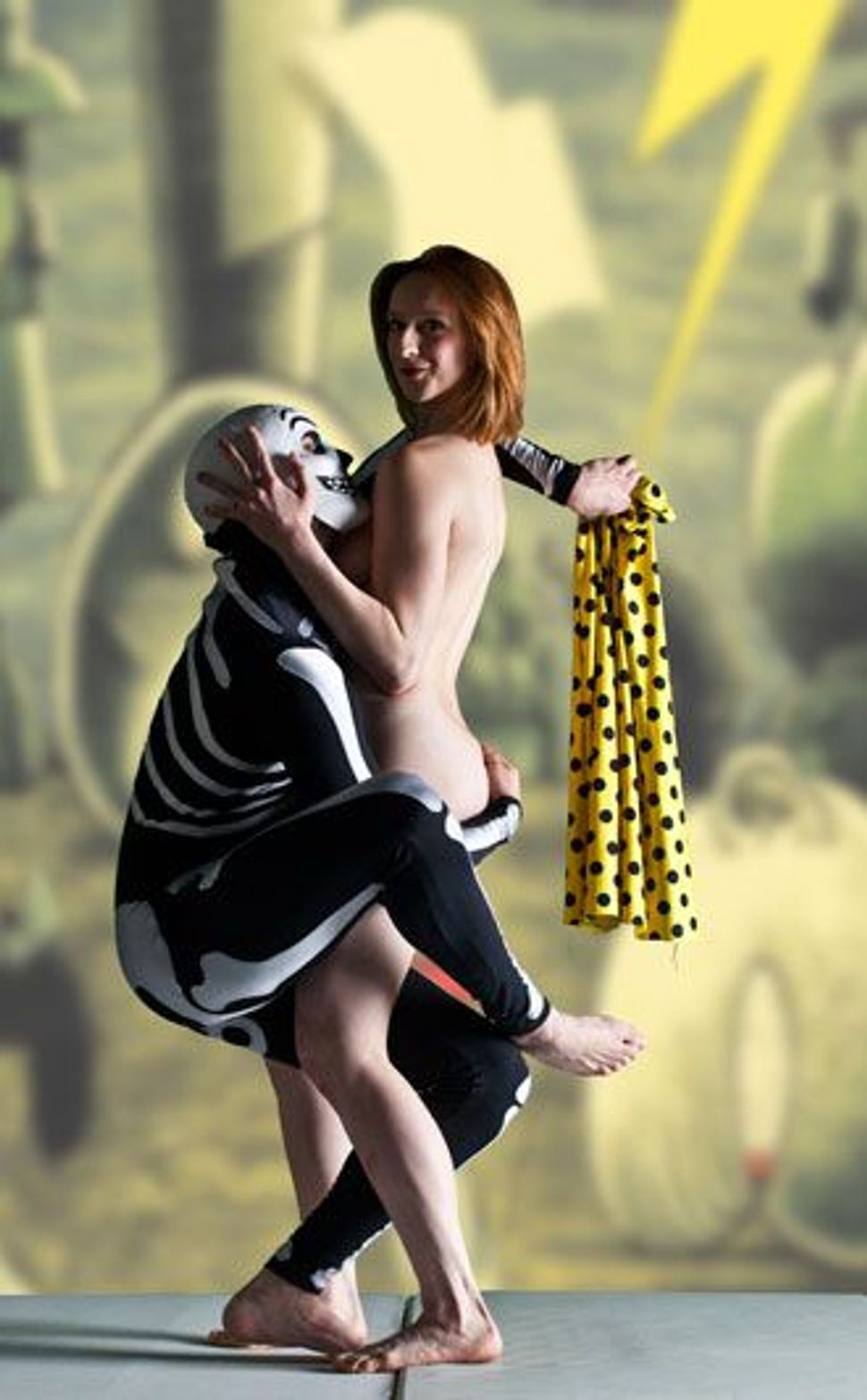 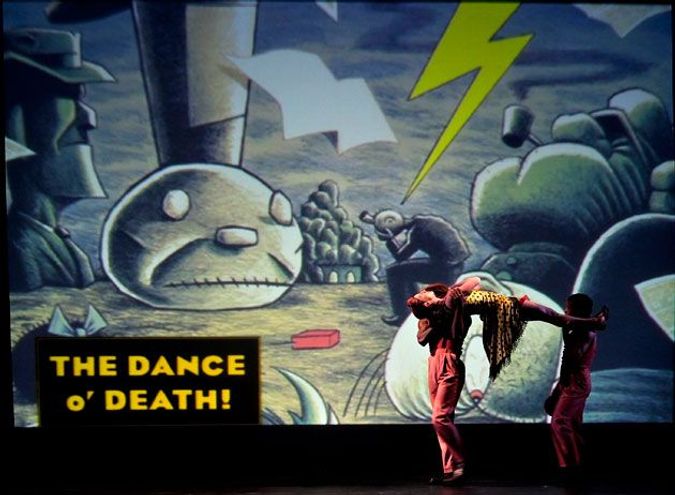 Art Spiegelman’s world of powerful drawings and the Pilobolus Dance Theater’s playful style intersect in an unusual collaboration that challenged the Pulitzer Prize-winning author to move out of his downtown studio and his own head.

The dance piece, “Hapless Hooligan in ‘Still Moving,’” was set to premiere July 12 at the Joyce Theater, in New York City. It is a dizzyingly stunning, noirish work that is set to an upbeat musical score by Rob Kaplowitz (FELA!) and features pieces by the early 20th-century French avant-garde composer Erik Satie and jazz musician Tiny Parham.

The pairings of seemingly opposing genres is not new to Spiegelman, the cartoonist and author of “Maus,” a graphic novel depicting his parents’ journey of survival and loss during and after the Holocaust. Opposing genres are also familiar to Pilobolus, the modern dance company known for its imaginative and athletic exploration of the human body, story and form. But a collaboration between the ever-smoking, self-deprecating New York artist, who is happiest working alone in his studio, and the obsessively positive, improvisational, collaborative dance troupe is surprising indeed.

“It was like [playing with] a new gadget: Let’s see what happens when you mix comics and three-dimensional movement,” said Spiegelman, who was working on the upcoming 25th-anniversary edition of “Maus,” titled “Meta Maus,” when he received the invitation from Pilobolus to collaborate on a dance piece exploring a topic of his choosing. 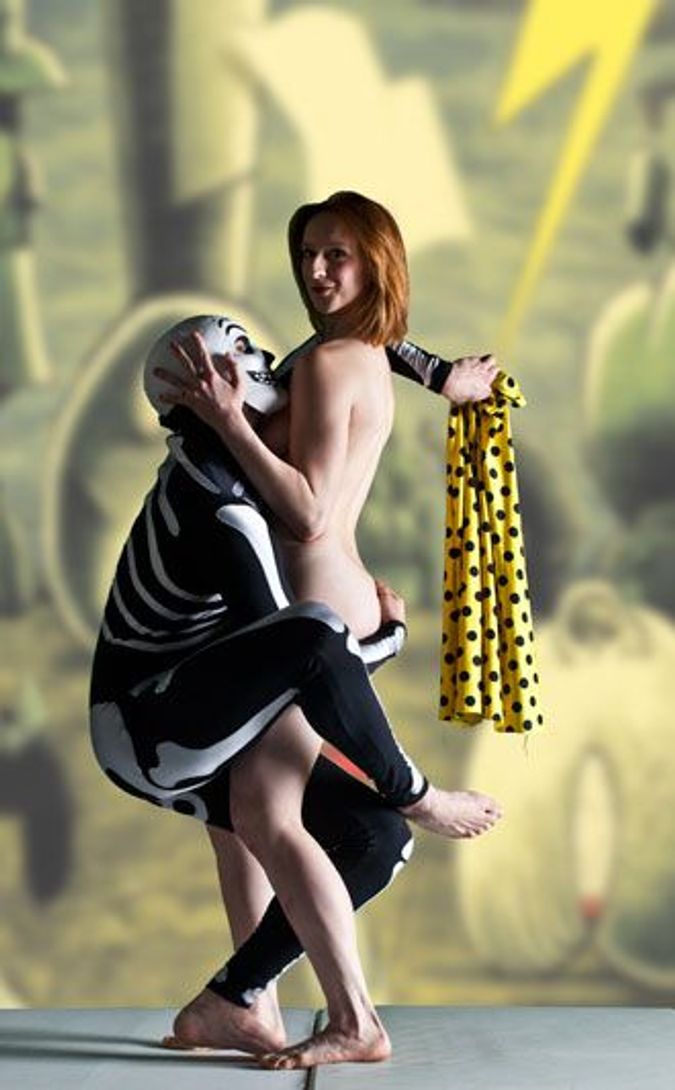 “We’ve been collaborating amongst ourselves for four decades now,” said Michael Tracy, one of the company’s artistic directors and the choreographer of “Hapless Hooligan in ‘Still Moving,’” “and we wanted to branch out. We all admired Art so much, and when he said ‘Yes,’ I felt like I’d won the lottery ticket.”

For Spiegelman, who had no experience with dance or collaboration of this sort, it was an even more surprising turn. The process forced him to venture out of his comfort zone. “Every time I leave my studio, I realize why I chose comics. I’m a control freak,” Spiegelman said. Dancers moving and grunting in space were a larger challenge than Spiegelman anticipated. According to Tracy, “Art is used to working with beautiful lines and a fantastic array of colors, and more importantly, his work is made up of one-dimensional panels of still occurrences, images, moving through time.”

After working with the dancers for a while, Tracy and Spiegelman realized that they needed to bridge the gaps between stillness and movement. The bridge they discovered was animation. The Hornet animation group was brought in to create a 30-minute strip made up of Spiegelman’s images, which are projected on a vast backdrop. The scene is complete only when the six dancers interact with Spiegelman’s animated images, as well as with his still cartoon panels and drawings.

Cartoons, not surprisingly, were Spiegelman’s topic of choice for this collaboration. He was not interested in exploring the Holocaust again, a period that Pilobolus had already collaborated on with Maurice Sendak in a piece titled “A Selection” (1999) and later documented in the film “Last Dance” (2002). Instead, Spiegelman, an avid cartoon historian, was now drawn to early comics and their evolution.

“Hapless Hooligan in ‘Still Moving’” is based on a comics character from the early 1900s called Happy Hooligan (Hap), a vaudevillian character that predates Charlie Chaplin. Hap, performed with precision and passion by Jun Kuribayashi, falls in love with Lulu (a new take on the 1930s character “Little Lulu”). She soon falls for the wrong man, who eventually murders her, and the tormented Hap searches for her high and low. Here, silhouettes of all shapes and sizes play an essential role, as Hap’s reality is explored in multiple layers: his journey, his thoughts, his dreams and the afterlife.

Spiegelman and Tracy both agree that there was more to bridge. “We were like a creature with several heads and limbs,” Spiegelman said. They learned that they also have different perceptions of narrative. “We’re much more accustomed to abstract,” Tracy said, “while for Art, it’s not enough if it sort of looks like something. He tells very personal tales in a visually precise manner.” The piece then grew into an homage to early comics, incorporating Spiegelman’s visions of the early 1920s and ’30s, as well as new motifs from Tracy’s imagination: Medusa, the afterlife and the Sphinx.

So did this mix of comics, theater, dance, animation and music all come together as a cohesive work? Spiegelman characteristically said he’s not sure and that the process was at times anxiety provoking, while exhilarating at others. Then he added: “I remember one breakthrough moment, though. After weeks of shouting ‘Don’t move!’ at the dancers, one day, I was improvising along with them, literally drawing with them on Photoshop, and then I realized, ‘Hey, I’m dancing, too, man, only with color.’”

Zohar Tirosh-Polk is a playwright and translator. She lives in Brooklyn.