Perplexed by the Guides? 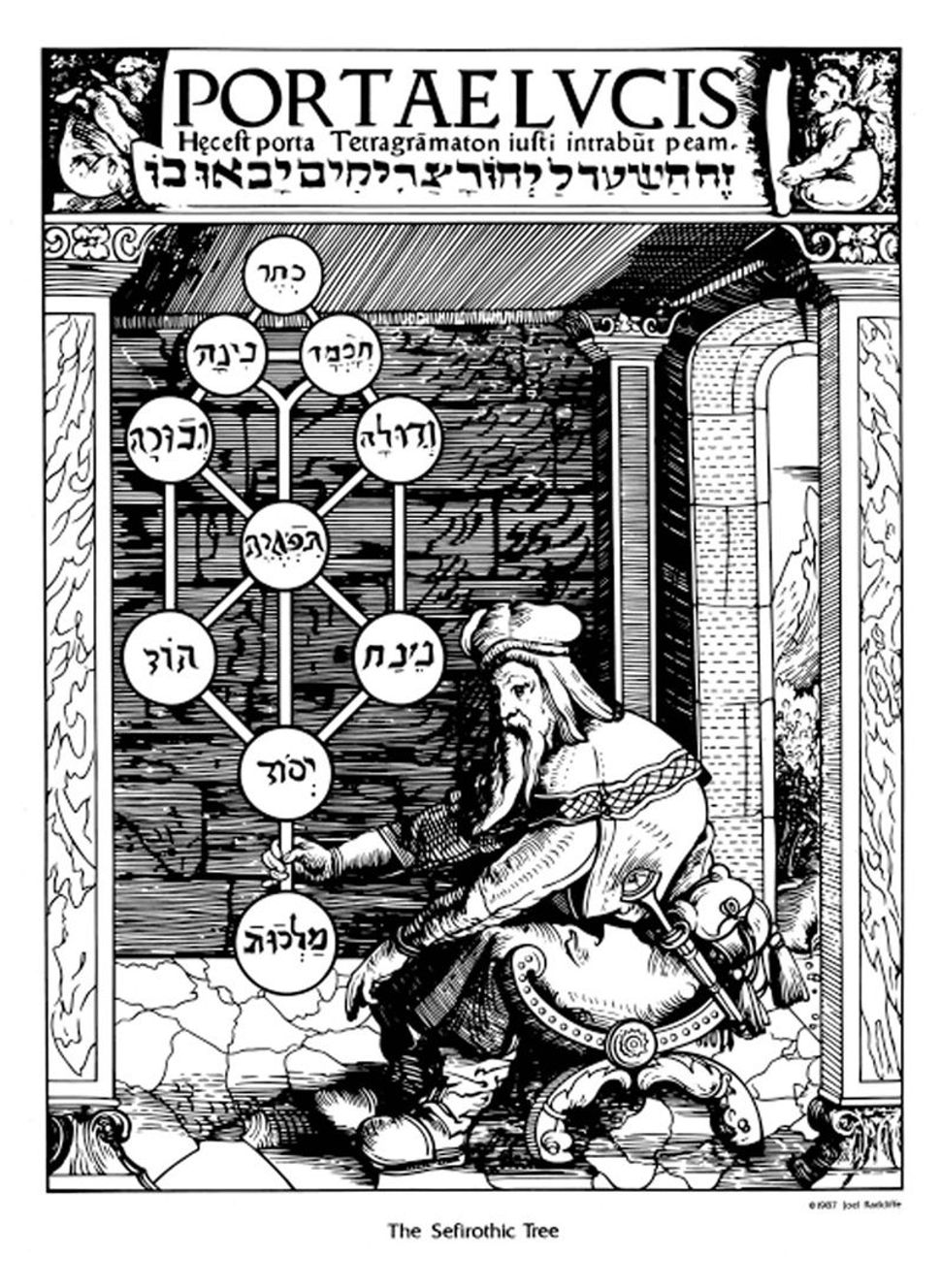 Doors of Light: A medieval mystic contemplates the sefirot on the title page of Paulus Ricius?s ?Portae Lucis? (1516). Image by PEN AND INK REPRODUCTION BY JOEL RADCLIFFE

I’m not one for magical thinking, but the way Kabbalah — the ancient tradition of Jewish mystical and esoteric wisdom — has evolved in our time does make me wonder. For centuries, Kabbalah was kept secret by a small elite of Jewish men. Its innovative theology and mind-scrambling puzzles were deemed too destabilizing for the masses, so even the few Kabbalah books committed to writing were written in a kind of code. 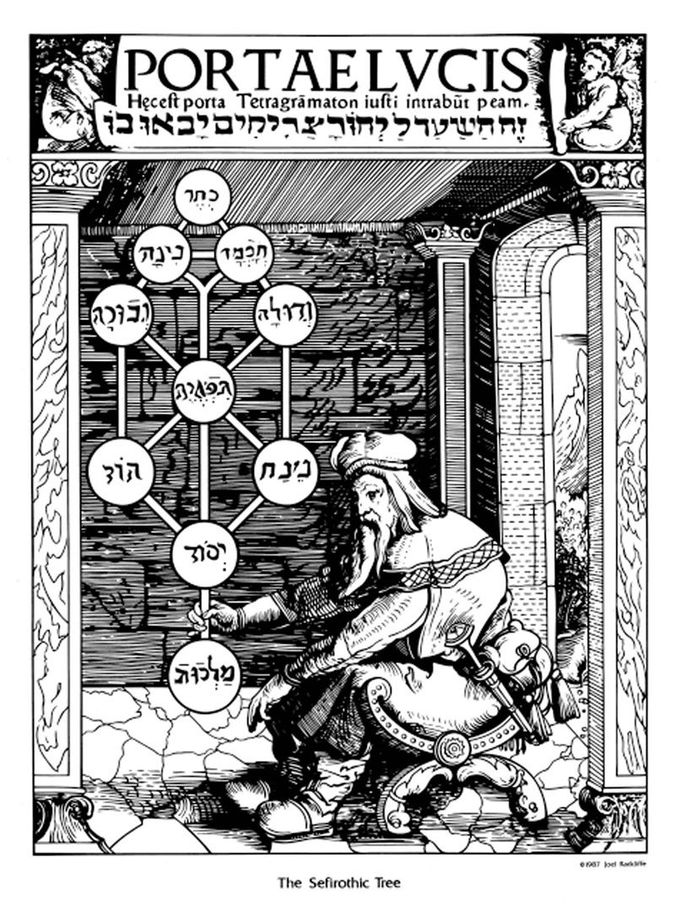 Doors of Light: A medieval mystic contemplates the sefirot on the title page of Paulus Ricius?s ?Portae Lucis? (1516). Image by PEN AND INK REPRODUCTION BY JOEL RADCLIFFE

In the last hundred years, thanks to the efforts of academics, spiritual seekers and, most recently, commercial entrepreneurs, the doors to this secret tradition have been flung open. Now you can attend Kabbalah classes in Kalamazoo and buy amulets on Amazon. Yet the commercialization of Kabbalah has been concealment, too. Whereas the secrets of Jewish mysticism had previously been obscured by difficult Aramaic texts, they’re now obscured beneath piles of literary manure. It’s almost as if the Kabbalah had devised a new way to hide itself.

Thanks to the bewildering array of pseudo-Kabbalah books, websites and other media out there, I get email every week asking, “Which Kabbalah book should I buy?” On the occasion of the publication of yet another Kabbalah anthology, here are some answers, intended for lay readers.

The first point to understand about buying Kabbalah books or finding Kabbalah teachers is that the “right” one depends largely on your frame of mind. If you’re of an eclectic, spiritualist bent; if you talk to angels; if you yearn for a heart-centered approach to mystical wisdom, then some books will speak to you more than others. But if you’re a skeptic, an academic or a dyed-in-the-wool rationalist, those same books will induce nausea. Just as we don’t all shop for the same clothes, so too there’s no one set of books that’s right for everyone. It depends on your style.

Yet there is still kosher and treyf when it comes to Kabbalah. Some general pointers: Avoid anything by the Kabbalah Centre, which blends Kabbalah with the metaphysical New Thought Movement and hucksterism. Avoid anything spelled Qabalah, unless you’re interested in Crowleyan magick (not that there’s anything wrong with that). If the book uses “G-d” instead of “God,” you may find it too traditional; then again, if it uses “God,” you may find it not traditional enough. And finally, look for sources in the index, footnotes and throughout the text. If there aren’t any, or if they’re all secondary sources by people with anglophone names, then approach the book not as a book of Kabbalah proper but as one that may or may not adapt Kabbalah usefully for a contemporary spirituality. This is fine — and often more practical (not to mention less sexist and ethnocentric) than the genuine article — but it’s not quite Kabbalah.

Personally, I like letting the Kabbalah speak for itself, which is why Edward Hoffman’s new anthology, “The Kabbalah Reader” (Trumpeter), is so valuable. This is not a work of scholarship; the translations collected in “The Kabbalah Reader” have all appeared elsewhere. But unless you already have a Kabbalah library of your own, “The Kabbalah Reader” is a very useful collection of important Kabbalistic texts. Perhaps its greatest contribution is the inclusion of relatively obscure Sephardic figures, contemporary teachers and difficult-to-find texts of Lurianic Kabbalah. Best of all, unlike other anthologies, Hoffman’s book offers excerpts (all translated by others) that are long enough to convey the original writers’ flavor. “The Kabbalah Reader” doesn’t provide much context — you’ll need another book for that — but it’s the real deal, and it’ll provide something new even for the Kabbalah veteran.

There are other excellent anthologies for laypeople. Daniel Matt’s “The Essential Kabbalah” (HarperOne, 1995) is the most approachable, with short excerpts, clear explanations and a minimum of extraneous matter. Matt’s choices are not objective; they reflect his own interests and tend to emphasize some parts of Kabbalah over others. But he gives a delicious taste. Other excellent anthologies include the classic “Schocken Book of Jewish Mystical Testimonies,” edited by Rabbi Louis Jacobs (Schocken, 1996); Alan Unterman’s “The Kabbalistic Tradition” (Penguin, 2009); and David Meltzer’s “The Secret Garden” (Barrytown, 1997).

For nonacademic introductions to Kabbalah, I generally recommend Rabbi Arthur Green’s “A Guide to the Zohar” (Stanford University Press, 2003), which is broader than the title indicates and is an excellent, concise introduction to Jewish mysticism. For those of a spiritual bent, Rabbi David Cooper’s “God is a Verb” (Riverhead, 1998) and Rabbi Lawrence Kushner’s “Honey from the Rock” (Jewish Lights, 2000 ed.) are excellent guides. A more traditional classic is Rabbi Adin Steinsaltz’s “The Thirteen Petalled Rose” (Basic Books, 2006 ed.), though it can be hard to read. Two other good introductions, previously reviewed in these pages, are Byron L. Sherwin’s “Kabbalah: An Introduction to Jewish Mysticism” (Rowman & Littlefield, 2006) and David Ariel’s “Kabbalah: The Mystic Quest in Judaism” (Rowman & Littlefield, 2006).

You might think that brand-name introductions to Kabbalah are generally worthless, and you’d be generally right. But two notable exceptions are “Kabbalah for Dummies” by Rabbi Arthur Kurzweil (For Dummies, 2006) and “The Beliefnet Guide to Kabbalah” by Arthur Goldwag (Three Leaves, 2005). Both of these books are really quite good and are easy to read. If you know Kurzweil’s work, this is not surprising — but you have to get past the “Dummies” label to see his name.

When you’re ready to dig a little deeper, Melila Hellner-Eshed’s masterful “A River Flows from Eden” (Stanford University Press, 2009) and Daniel Matt’s annotated translations of the Zohar (Stanford University Press, now five volumes strong and also reviewed in these pages) will both introduce you to one of the most fascinating, enigmatic books (if that’s even the right word) in the history of humankind, the Zohar. After all, the real answer to “Which Kabbalah book should I buy?” is “The Zohar.” With Green’s introductory guide, Hellner-Eshed’s study and Matt’s translation, this gem of human civilization is now available to capable lay readers. Please avoid the Kabbalah Centre’s various renderings of the Zohar, and for God’s sake don’t spend hundreds of dollars on its editions. You can get a Hebrew/Aramaic edition at any good Judaica store (or online at places like seforimonline.org), and with the English-language guides I’ve suggested, you’ll be equipped to meet the masterpiece of Kabbalah directly.

Ultimately, the best way to learn Kabbalah is the old-fashioned way: with a teacher. Unfortunately, the so-called Jewish establishment has completely missed the boat on this one, ceding the space to the Kabbalah Centre, Chabad and independent centers such as Michael Laitman’s Bnei Baruch institute. Finding a Kabbalah teacher can be challenging and time-consuming (I’ve posted some guidelines for doing so online), especially as one size does not fit all. I’m still waiting for the Jewish establishment to wake up to the legitimate thirst for learning and make it easier to find Kabbalah teachers who won’t mislead their students. For now, however, we have to rely on hard work, intuition, common sense and persistence. Oh, and if a potential teacher asks for a lot of money or seems to be spending a fortune on advertising — leave.

Sometimes I despair over the amount of dross covering the beauty of Kabbalah; there’s an awful lot of oyster before you get to the pearl. Then again, this is not only how Kabbalah has been for hundreds of years of its existence — it’s also one of the primary teachings of the tradition itself. It’s just that the kernel has some new shells around it.

Jay Michaelson is a columnist for the Forward. He also writes for the Huffington Post, Tikkun and The Jerusalem Post, among other publications.

Perplexed by the Guides?