Slapping the Other Cheek 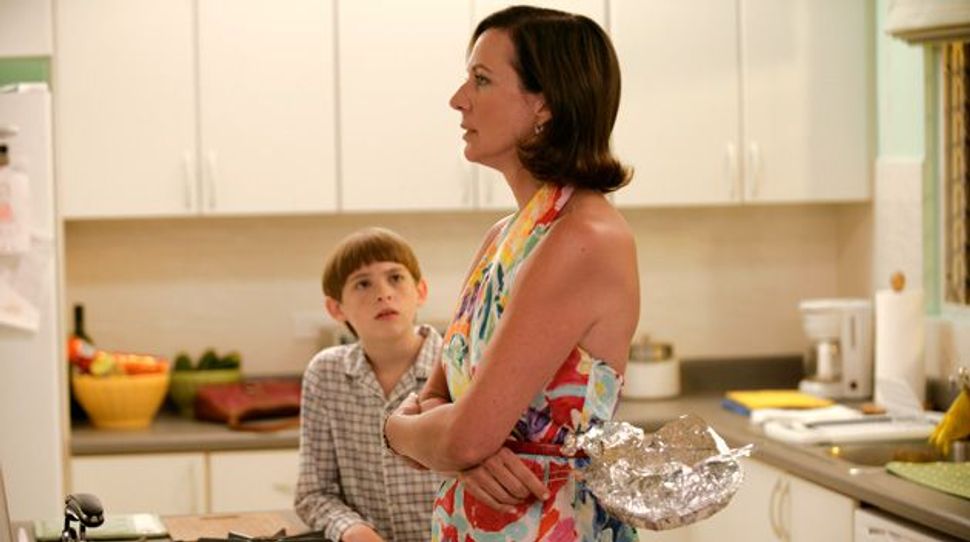 Film director Todd Solondz is known for making his audiences squirm with discomfort, and “Life During Wartime,” released July 23, is no exception. A sequel of sorts to his film “Happiness” (albeit with a different cast), “Life During Wartime” is a mega-mix of angst, pedophilia, awkward puberty and big-time familial dysfunction. But the film is also profoundly Jewish, as it wrestles with deeper concepts of faith and forgiveness beneath its satirical surface.

In the film, three sisters, Joy, Helen and Trish, struggle with different elements of forgiveness. Trish, a sort-of-single mother of three (played by the marvelous Allison Janney), has disavowed her old life and marriage by moving to Florida, where she can be a new, sunnier self. Joy (Shirley Henderson) has gone to Florida to visit Trish, and then goes out to California to see Helen (Ally Sheedy), a furious Hollywood type who is both intensely successful and remarkably self-absorbed. Joy catapults between the sisters, a do-gooder lost in her attempt to forgive her own husband, a partially rehabilitated criminal who has returned to his old ways.

We quickly learn that Trish has gone so far as to tell her two younger children, Timmy and Chloe, that their father is dead. Thanks to the Internet, though, one of Timmy’s friends helpfully notifies him that his father isn’t actually dead — he’s alive, and what’s more, he’s a pedophile. Bill (Ciarán Hinds) was incarcerated for child molestation, and at the start of the film, he emerges from prison to track down his family, particularly his oldest son, Billy, who’s now at college.

The film is littered with terrific quotes: “Mommy, I’m out of Klonopin!” 7-year-old Chloe says. “Honey, you know you just take half a Wellbutrin,” Trish distractedly instructs her. It’s also chock-full of spot-on satire of knee-jerk liberalism. In one example, Helen rants about how her sister has misperceived injustices against her; her tirade takes place in front of a large photograph of a Palestinian boy throwing a rock at a tank. But Solondz’s uniquely Jewish lens is what makes the film transcend its biting observations and snappy witticisms and become something more.

Without using Jewish terminology, the film portrays the struggle between the yetzer ha-tov and the yetzer ha-ra — the inclinations toward good and bad, respectively. It also contemplates, again implicitly, whether apology without teshuvah, or actively turning away from one’s wrongdoings, can ever truly be sufficient.

“With forgiveness, the more you say you’re sorry, the less it has meaning or value,” Solondz said in a phone interview with the Forward. “That said, I’m more interested in the way the past holds on to us and doesn’t let go, and defines so much of how we are and how we move forward.”

Solondz, who attended yeshiva in Elizabeth, N.J., for several years as a child — “I got too religious, and my family took me out,” — said that while he had envisioned the film’s family as Jewish back when he made the initial movie, “Happiness” (1998), it wasn’t as relevant as it became with this film, originally titled “Forgiveness.”

When asked whether he considered the film to be deeply Jewish, Solondz responded with a faint resonance of talmudic exegesis. “I wouldn’t dispute that, but I wouldn’t be the one to describe it that way,” Solondz said. “It’s very possible that that’s very true, but I don’t have the distance to agree or disagree. It’s certainly overt in its Jewishness, and a Jewish presence.”

Solondz, who once hoped to be a rabbi, now characterizes himself as an atheist. “I have a very superficial understanding of a lot of the philosophy of Judaism — but I have some grasp of the way in which it affects us, the way in which it informs the way we live,” he said. “I am Jewish, but it’s more cultural than religious. I don’t believe in God, so I get disqualified. But I was brought up with my mother telling me, ‘It doesn’t matter what you think — the Nazis think you’re a Jew!’ I accept it and embrace it.”

The film is a prolonged, not-entirely-comfortable embrace of Judaism. It’s a little too overbearing and a little too intimate — like getting hugged by your heavily perfumed Great Aunt Sadie at a family bar mitzvah. Timmy is about to have his own bar mitzvah, and he struggles to understand what makes him a man when he can’t even understand the people around him. Trish’s “boyfriend” is an overweight older man who professes a knee-jerk, old-school love of Israel. Music from the Yom Kippur liturgy is an aural schmear over Timmy’s scenes in the film. Pervading the entire film, however, is a sense of unease: an idea that turning the other cheek is not always possible.

“On the one hand, you can have parents have a child, and the child is raped and murdered and it’s a terrible tragedy and atrocity — and if they’re of a certain religious persuasion, they may have it within them to forgive the criminal,” Solondz said. “Another family may have a different orientation and they may seek vengeance on that murderer, that criminal. To me, they’re both valid responses.

“The movie is not prescriptive — it’s exploratory. These questions — there are limits, you know? And if you grew up in the shadow of the Holocaust, it’s hard not to see those limits of what one can accept, forgive and so forth. And I think that shapes all of us.”

When I asked him if he’d seen the Coen brothers’ latest and most Jewish work, “A Serious Man,” he responded with incongruous, nebbishy delight: “I loved that movie, I did! And you know, I thought that was funny they were doing a bar mitzvah movie the same time we were, that’s so funny. But isn’t that what you have in the suburbs — the bar mitzvah double bill?”

Watch the trailer for “Life During Wartime” below:

Jordana Horn, the New York correspondent for The Jerusalem Post, is a lawyer and a writer at work on her first novel.

Slapping the Other Cheek