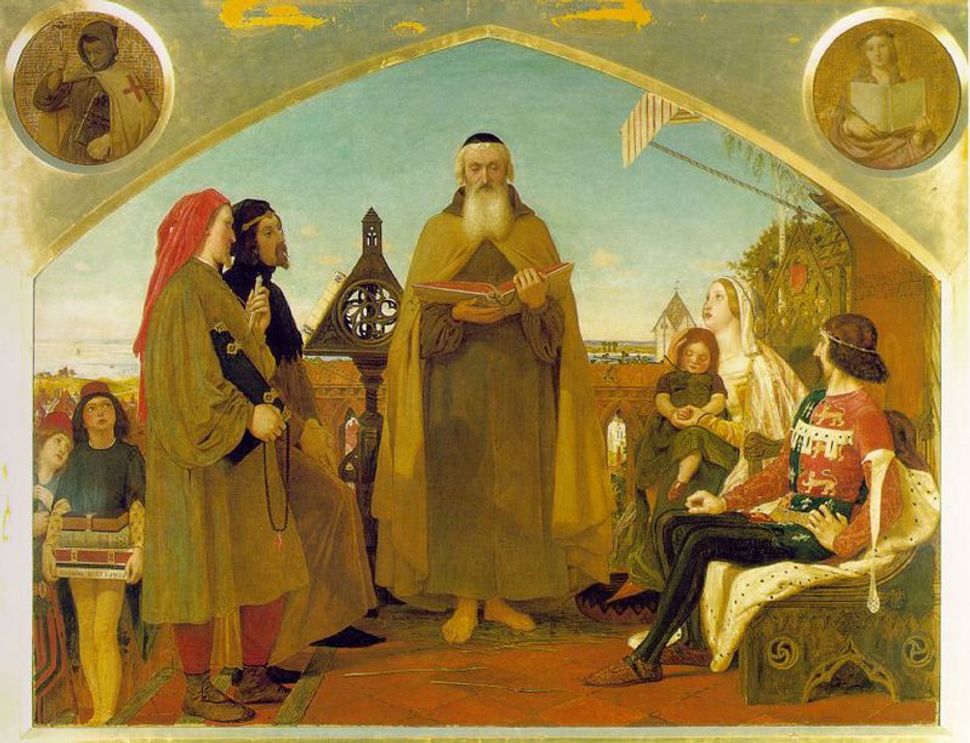 John Wycliffe of the ?Wycliffe bible?: The man who put the ?h? in Sabbath. [click for larger view] Image by WIKI COMMONS

Solomon Miller writes from Huntsville, Ala.:

“I am puzzled by the origin and pronunciation of the English word ‘Sabbath.’ Since it obviously comes from Hebrew shabbat, why isn’t it ‘Shabbath’? And why the ‘th’ at the end of it? Is this an attempt to mimic an aspirated Hebrew ‘t’? If so, was it ever pronounced that way instead of like the ‘th’ in ‘thin’?”

Between the Hebrew Bible, whose last books were written well before the start of the Common Era, and its many translations into English, of which the earliest complete one was made by John Wycliffe in the late 14th century, stand two other Bibles. One is the Septuagint, a translation of Scripture into Greek made by Jews in Alexandria (then a Greek-speaking city) between the third and first centuries BCE. The second is the fourth-century C.E. Latin translation of Jerome, who used the Septuagint as one of his principal aids. Jerome’s Vulgate (as it was called, because its language was colloquial or “vulgar” Latin) became the sole Bible used by the medieval Catholic Church and was heavily relied on by early translators of the Bible, like Wycliffe, into the vernaculars of Europe.

Since neither ancient Greek nor Latin had a “sh” sound, the word shabbat was rendered in both the Septuagint and the Vulgate with an initial “s,” as sabbata and sabbatum, respectively. This “s” was retained by all the languages of Europe, giving us “Sabbath” in English, sábato in Italian, sábado in Spanish, Sabbat in German and so on.

So far, so good. But why, as Mr. Miller asks, does English have a “th” at the end of “Sabbath” when there is none in ancient Greek or Latin, let alone in contemporary European languages? Here is where things start to get complicated.

To begin with, in biblical times, the final taf of Hebrew shabbat was indeed pronounced like the “th” in “thin.” (It was not aspirated, which is something quite different.) Apart from the fact that all Semitic languages once had such a “th” (Arabic alone has preserved it), we have two ways of knowing this. One is that ancient Greek, too, had a “th,” represented by the letter theta, and that biblical names ending in taf, such as Bosmat (Genesis 26:34) or Kohat (Genesis 46:11), are always transliterated with a theta by the Septuagint. And since, although Latin did not have a “th” sound, it used the combination “th” when transliterating the theta in Greek words, Jerome’s Vulgate has “Basemath,” “Kohath” and so on.

The second piece of evidence is that the final taf is pronounced “t” in Sephardic and Middle Eastern Hebrew and “s” in Ashkenazi Hebrew. Inasmuch as “t” cannot directly turn into “s” by any known process of phonetic change, we are forced to posit an original “th” behind both sounds, a dental fricative that was de-fricativized by Levantine Jews and de-dentalized by Central and Eastern European Jews.

Yet this only seems to make everything more confusing. On the one hand, if the final Hebrew taf is represented in the Septuagint by Greek theta, why does the Septuagint not have sabbatha instead of sabbata? And on the other hand, if English did not get the “th” of Sabbath from the Septuagint or the Vulgate, where did it get it from?

One can only speculate. Here’s an attempt at it.

The language spoken by Jews throughout the Middle East at the time of the Septuagint was Aramaic, in which the word for shabbat was shabbata or shabta, with an ordinary plosive “t.” Although ancient Greek had the nominative case ending “-a,” as in a noun like thalatta, “sea,” the more normal form would have been sabbaton, which is in fact what we find in later Greek. It is very likely, therefore, that the Aramaic influenced the translators of the Septuagint in their choice of sabbata — and in that case, they would have also preferred the plosive Aramaic “t” to the fricative Hebrew “th.”

And the “th” at the end of English “Sabbath”? Interestingly, one does not find it in the word’s earliest recorded medieval appearances, such as “sabadt,” “sabat” and “sabot.” It is only in the Wycliffe Bible that one first has “saboth,” after which the “th” spelling began to be seen regularly. It would seem, therefore, that this “th” was Wycliffe’s innovation.

Why did he introduce it? Perhaps because, even though he did not know Hebrew or Greek and translated entirely from Latin, he did know that the Hebrew word for the Sabbath was shabbat, from which he reasoned that if this word had a final taf, it must have been pronounced the same as the taf represented by the Vulgate as “th.” Such a deduction would have been correct, and apparently it was what caused Wycliffe to make English the only European language in which the lost “th” of Hebrew shabbat was restored.