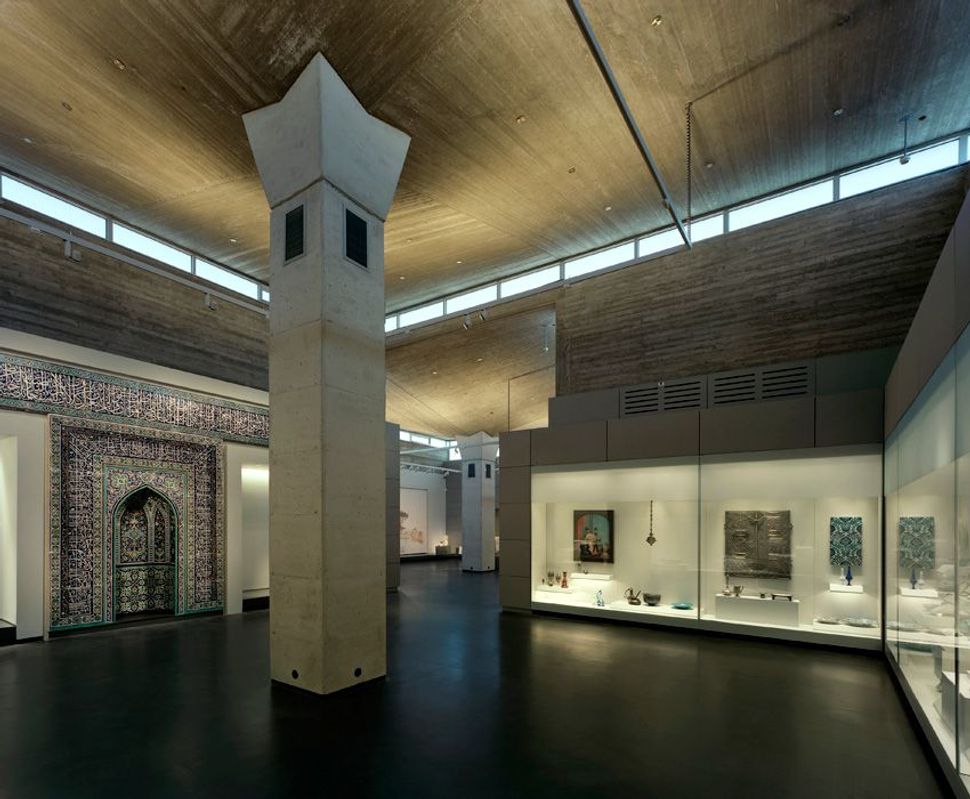 Let There Be Light: Filtered glass allows the light to flow in between the walls and the roof of buildings. Image by Courtesy Of The Israel Museum 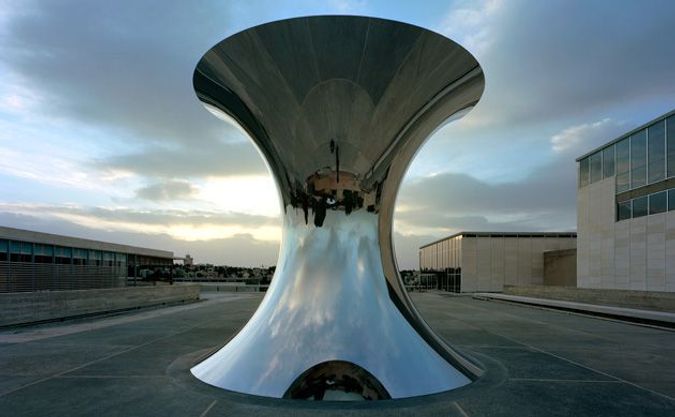 A Time For Reflection: Anish Kapoor?s site specific installation provides a spectacular view of Jerusalem at the end of a newly revamped walkway at the Israel Museum. Anish Kapoor, ?Turuning The World Upside-Down, Jerusalem? (2010) Image by COuRTESY OF THE ISRAEL MuSEuM

After three years and $100 million worth of renovations, the Israel Museum threw open the doors of its renewed campus for an elite opening party July 25 and to the public July 26.

The museum, Israel’s largest cultural institution, has suffered in the past from a reputation as inaccessible. Exhibits were dense and difficult to navigate both intellectually and physically. Built on a hill in Jerusalem, the museum had a small entryway skewed both from approach and from exhibits, meaning a visit with a stroller or wheelchair was near impossible.

Now, a revamped entrance, a partly underground enclosed walkway and new elevators ensure that everybody can reach all parts of the 20-acre campus. Under museum director James Snyder, the indefatigable former deputy director of New York’s Museum of Modern Art, exhibitions have been reorganized around an easy-to-understand plan, with displays that are sparser and easier for the casual visitor to digest.

The museum, which is located close to the Knesset, has doubled its exhibition space to 200,000 square feet. At the same time, it has cut the number of objects on display to 8,500 from 11,000. The result is a museum that can hold the attention of the tourist or local who visits for a few hours, while still fascinating the researcher who is on site for days.

Remarkably, the doubling of the exhibition space has been achieved with just a 15% increase in the built footprint of the museum. The key has been clever architecture by James Carpenter Design Associates, which has maintained the original modernist geometry by Alfred Mansfeld and Dora Gad, while adding contemporary touches such as shaded glass pavilions. These mimic the appearance of the original modular-concrete and Jerusalem-stone pavilions that continue to house the exhibitions.

Snyder said at a preview that when then-Jerusalem mayor Teddy Kollek came up with the plan in the 1960s for an ambitious national museum in his city, it seemed a “crazy vision.” Snyder commented: “It is humbling for us, 45 years after the founding, that this place may be realizing what his vision was all about.”

The redevelopment required the largest fundraising initiative that an Israeli cultural institution has undertaken without promising to name itself after a donor. After several years, in December 2009, all the funds — more than $80 million of which came from 20 individuals, families and foundations around the world, and $17.5 million of which came from the Israeli government — were finally secured.

The practical challenges were also significant. The windows in the original 1960s exhibition buildings, vital to the architectural plan of floating roofs, were mostly boarded up or painted over to prevent sunlight from damaging artifacts. A unique filter glass was specially engineered, and the original buildings are now light and bright. Smaller practical challenges remained until the last minute before the opening. With five days to go, workers were scratching their heads in the archaeology wing, wondering how to get the Greek hero Heracles — or a second-century Roman statue of him — onto his stand. Elsewhere in the wing, a woman stood with a bowl of plaster, a nailbrush and a fork, applying the finishing touches to a reconstruction of a newly acquired 2,000-year-old mosaic.

The museum owns 500,000 objects from across the globe, spanning archaeology, artwork and manuscripts, including the Dead Sea Scrolls. The main change that visitors will notice in the new galleries is that curators have decided to stay focused on telling stories and exploring themes, instead of getting bogged down by the vastness of the collection at their disposal. Snyder told the Forward that “if you use the object of the greatest aesthetic value and the greatest substantive meaning with respect to the narrative… at times it means you use fewer objects.” 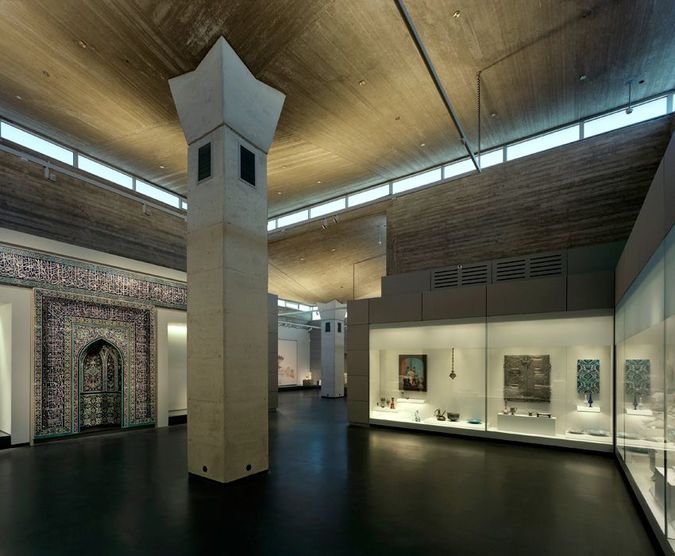 Let There Be Light: Filtered glass allows the light to flow in between the walls and the roof of buildings. Image by Courtesy Of The Israel Museum

The newfound decisiveness is most evident in the archaeology wing, which consists of seven chronologically arranged galleries that tell a story of the historical events, cultural achievements and technological advances in the Land of Israel since the dawn of civilization.

Visitors are transported from prehistory through a section on the Canaanites to one on the Bible. From there, they move on to the Greeks and the Romans, with a focus on their gods: One section is on the era of Roman rule; another is on the early years of rabbinic Judaism, Christianity and Islam, and still another covers Muslims and Crusaders. Spanning the sections is a series of displays called “Neighboring Cultures.” This helps the Israel Museum’s narrative emphasize the various eras in local history and the influence of surrounding cultures on that of the Israelites. At one point, visitors see a synagogue, a church and an Islamic prayer niche, all from the fourth to seventh centuries, one after the other in a single exhibition area.

The redevelopment has ushered a sense of fun into the museum. As you enter the archaeology wing, an assembly of surprisingly cute 13th-century human-shaped coffins from Gaza welcomes you as the wing’s hosts and hostesses. As you leave, a seventh-century inscription from the Galilee cites Deuteronomy and declares, “Blessed shall you be when you come in and blessed shall you be when you go out.”

The management of the museum has acted with confidence and made bold choices. One was to raise significantly the profile of contemporary art, which now accounts for 10% of the gallery space. Another was to give greater prominence to Israeli art, now the first section you see when you arrive at the art wing, but previously not deemed deserving of its own permanent exhibition.

The art within each of these subsections is varied. Among the artists who explore the body, Rubin’s work epitomizes the idea that Diaspora Jews became stronger and sturdier in the Land of Israel. Just a few feet away, a video installation by the Israeli-Arab artist Sharif Waked loops a fashion show of clothing, including a suit that stops at the midriff, and a shirt that zips open horizontally across the middle to make it easy for Israeli soldiers to body search Palestinians at checkpoints — an ironic take on what the artist considers a humiliating experience.

Perhaps the boldest decision of all was to let three artists loose in the museum’s collections and put together any exhibition they wanted, using anything they could find. The artists chosen for this temporary exhibit, “Artists’ Choices,” were American Susan Hiller, British-Nigerian Yinka Shonibare and Israeli Zvi Goldstein.

Goldstein decided to take his recently published book of (English-language) poems, “Room 205,” and display objects that inspired or influenced the book’s material. He saw this as a way of saying more about the themes behind his poems, and also of animating the museum’s collection. “It’s subjectifying the museum collection, which is based on data — origins, dates and the like,” he said.

Goldstein called his display “Haunted by Objects.” In putting it together, he didn’t stop at the museum’s official collection. For the six months of the exhibit, museum workers will lose chairs, cabinets and tools. Next to a poem about how he bored a hole in his ceiling “to watch God/judging” but did not see Him, Goldstein mounted several electric drills. “As a child, I had a dream: to write an opera. I think I fulfilled it here — it’s an opera for objects,” he said.