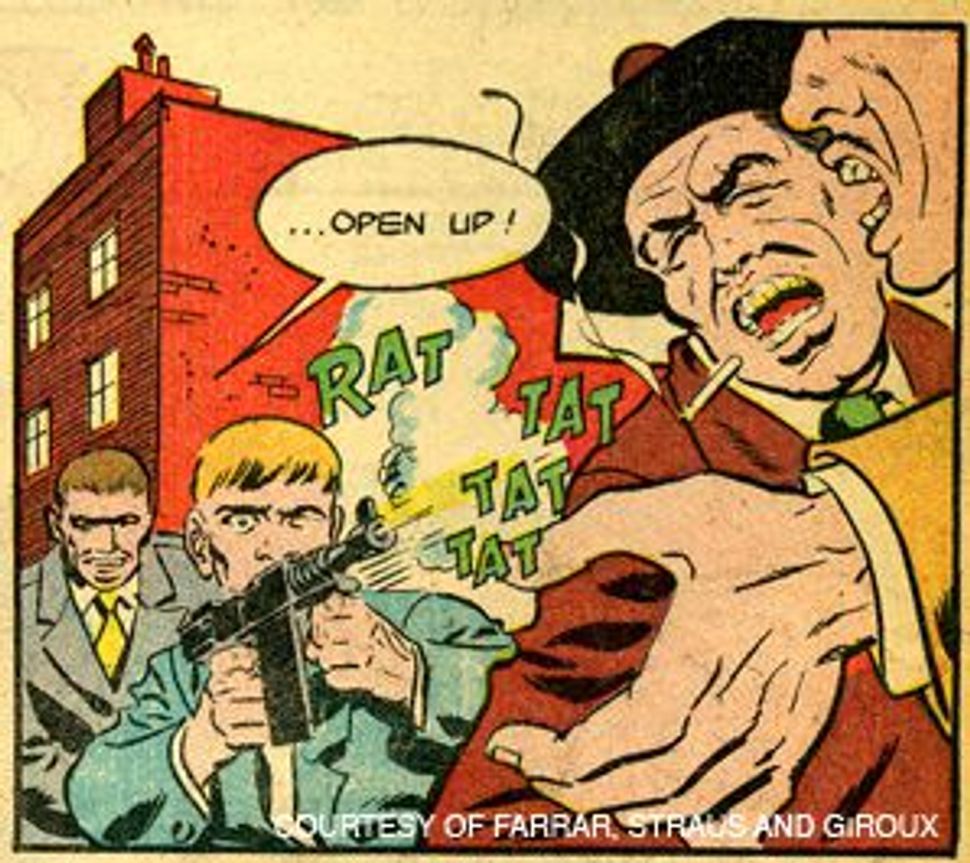 Disguised as Clark Kent: Jews, Comics, and the Creation of the Superhero 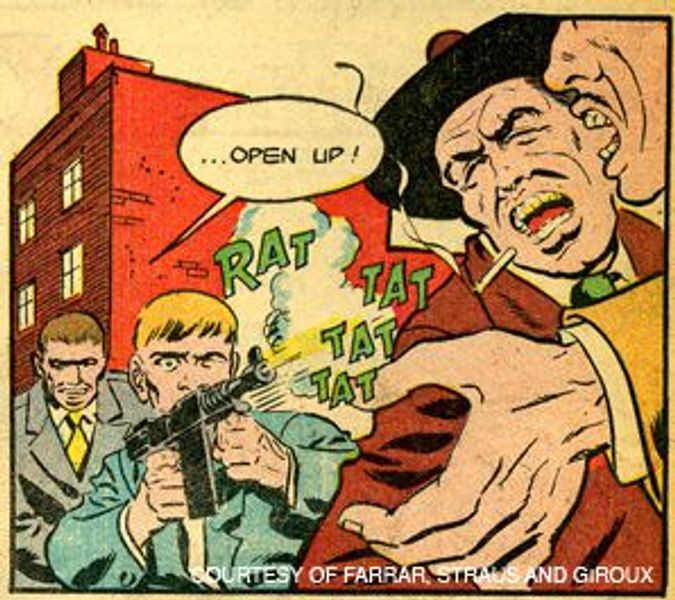 The Ten-Cent Plague: The Great Comic-Book Scare and How It Changed America
By David Hajdu
Farrar, Straus and Giroux, 448 pages, $26.

The history of comics has been big recently, and there’ve been a number of books and articles about it. Because so many Jews were there at the creation of both the comic book and the great superheroes who served as the main attraction, you have to ask the obvious question: What, if anything, does it mean that the industry was so heavily populated by Jews?

Your answer to this will depend on what you think “comic books” really do. In “Disguised as Clark Kent: Jews, Comics and the Creation of the Superhero,” Danny Fingeroth seems to assume that the most important comics tell tales of superheroes. He is mostly interested in what he calls “The Golden Age” — from 1938 until the end of the Second World War — when caped crusaders and men of steel patrolled the streets of Gotham City and the skies of Metropolis. Fingeroth, a former comics editor at Marvel, also gives due attention to the “Silver Age” of the 1960s and beyond — the heyday of oddball heroes, like Spider-Man and The Fantastic Four. Unfortunately, the narrative he constructs leads him to breeze over what happened to the comics between the golden and the silver ages, to the fact that after the war, comic book buyers got bored with the squeaky-clean defenders of the innocent. They were more interested in Wonder Woman’s breasts.

As David Hajdu points out in “The Ten-Cent Plague: The Great Comic Book Scare and How It Changed America,” overt sex sold, horror reigned and the villains stole the stage from the superheroes. Magazines suddenly sported racy titles, like “Crime SuspenStories,” “My Secret Life” and “The Crypt of Terror.” These, too, were created by Jews. As far as Hajdu is concerned, you need to look at the whole industry — at both “Superman” and “The Crypt of Terror” — to understand what the comics mean. Hajdu demonstrates that the comics’ particular meanings and their particular forms of Jewishness cannot be divorced from their specific — and distinct — histories.

Fingeroth admits that it’s “hard to tell” where the comics themselves are properly Jewish. It probably is. Superman presents a relatively easy case: Jules Feiffer has argued that the Man of Steel really came “from the planet Poland,” while Gerard Jones, in his excellent 2004 book “Men of Tomorrow: Geeks, Gangsters, and the Birth of the Comic Book,” suggested that Superman quite literally embodies the Jewish immigrant’s dilemma (he has to pretend he fits in, while knowing that he has special, unseen and potentially unappreciated powers). The “secret” of Superman’s success also rests on the fact that his is the dilemma of every geeky and not-so-geeky kid. A hero on the inside, he’s prime bully bait on the outside. So Superman’s dual identity fits a number of important bills. DC Comics, Superman’s publisher, profited from all of them.

But what about Batman? Hardly an immigrant and definitely not Jewish. And the rest of that alliterative and hardy crew of caped and costumed heroes who bashed the bad guys all through the early 1940s? Again, hard to tell. Nevertheless, Fingeroth wants to tell. The trouble is that he has to hyperextend in order to tease out what he calls “shreds of Jewish meaning” from the superhero comics. Unfortunately, that’s all they are: shreds.

According to Fingeroth, some heroes are stand-ins for Moses, some for survivors. Because comics script writers were ambivalent about not being professionals themselves, they created heroes who were established professionals in their day jobs. (Sorry, Mom.) You get the idea. Perhaps the oddest of Fingeroth’s claims is that Captain America’s writers were particularly Jewish in that they wanted every story to be “universal.”

In “The Ten-Cent Plague,” Hajdu makes the interesting case that postwar comics were the first shot in a coming youth revolt. By the early 1950s, cities were banning comics. Prodded by their parents, kids were burning them. The Senate was investigating them. Hajdu indicates that the sex and mayhem stories that caused such a ruckus represented the flip side of the superheroes’ adventures. He suggests that we see them as expressions of a particularly Jewish — though likely unconscious — mistrust of assimilation, of its enforced conventions and unavoidable authority. So if DC’s Superman appealed to the nerd in all of us, the sleazy comics peddled by companies like EC spoke to an inchoate but increasingly independent youth culture.

This new buying public of rebels without a cause — the same kids who would turn Elvis into a superhero of a different kind — scared the daylights out of their parents. Even though there was no overt proof, psychologists, politicians and the chief crime fighter in the land, J. Edgar Hoover, claimed that reading comics led directly to juvenile delinquency. In 1954, psychologist Frederic Wertham published his most famous work, “Seduction of the Innocent,” which made it sound as if he wanted to protect our children from the pernicious influence of the comics. But Hajdu makes an excellent case that the anti-comics brigades wanted protection from our children. The seduced, it seems, resembled other paranoid fantasies of the Cold War: all those fifth-columnists in the State Department and the communist dupes in the schools, those invasive germs in the kitchen and the brainwashed automatons lurking in the streets.

While Hajdu explicitly refuses to draw a parallel between McCarthyism and the attacks on the comics industry, they are linked by a common fear of contagion and subversion. And, though Hajdu won’t go this far, it would be fair to guess that there was more than a touch of latent antisemitism in the comic book affair. The Catholic Church, the American Legion, towns without many Jews and towns with too many Jews all ganged up on the comics. Jewish comics editors and publishers like Bill Gaines (hopped up on amphetamines and aggression) came up before televised committees of such manifestly upright, proudly non-Jewish lawmakers as Estes Kefauver and Robert C. Hendrickson (and, as Michael Chabon shows in “Kavalier and Clay,” the Jews did not come out so well). In an era when the most famous American traitors were a pair of down-at-the-heel communist Jews, it’s hard to imagine that the great comics scare was not a sideshow in the even greater Red Scare.

Hajdu’s book winds up in the mid-1950s with the exemplary case of EC’s Mad magazine. Mad’s caustically anarchic humor — sometimes gross, and often puerile — matched up Jewish snarkiness with adolescent rebellion. It was a hit. Having incurred the anger of the powers that were, EC turned Mad into a “real” magazine, upped its price and found a different distributor. EC and Mad lived to fight another day.

In the glory days of the depression and World War II, millions of people read about Superman, Batman and the scores of other superheroes who rode in on their cape-tails. Though a lot fewer people now buy comics, Fingeroth is right to say that these heroes still saturate our culture — if mostly at the movies. In the final chapter of “The Ten-Cent Plague,” R. Crumb is quoted as saying that he never got over “Mad.” We have never gotten over Superman, either.

For better and for worse, the comics, cranky and grandiose as they frequently are, really do express the various fantasies of American Jews. What’s more — and this is absolutely critical to their success — they seem to reflect the fantasies of everyone else. Of course Jews and non-Jews sometimes dream of different things, but that might be the most important point. The comics can mean so much because they can skillfully coordinate so many dreams.