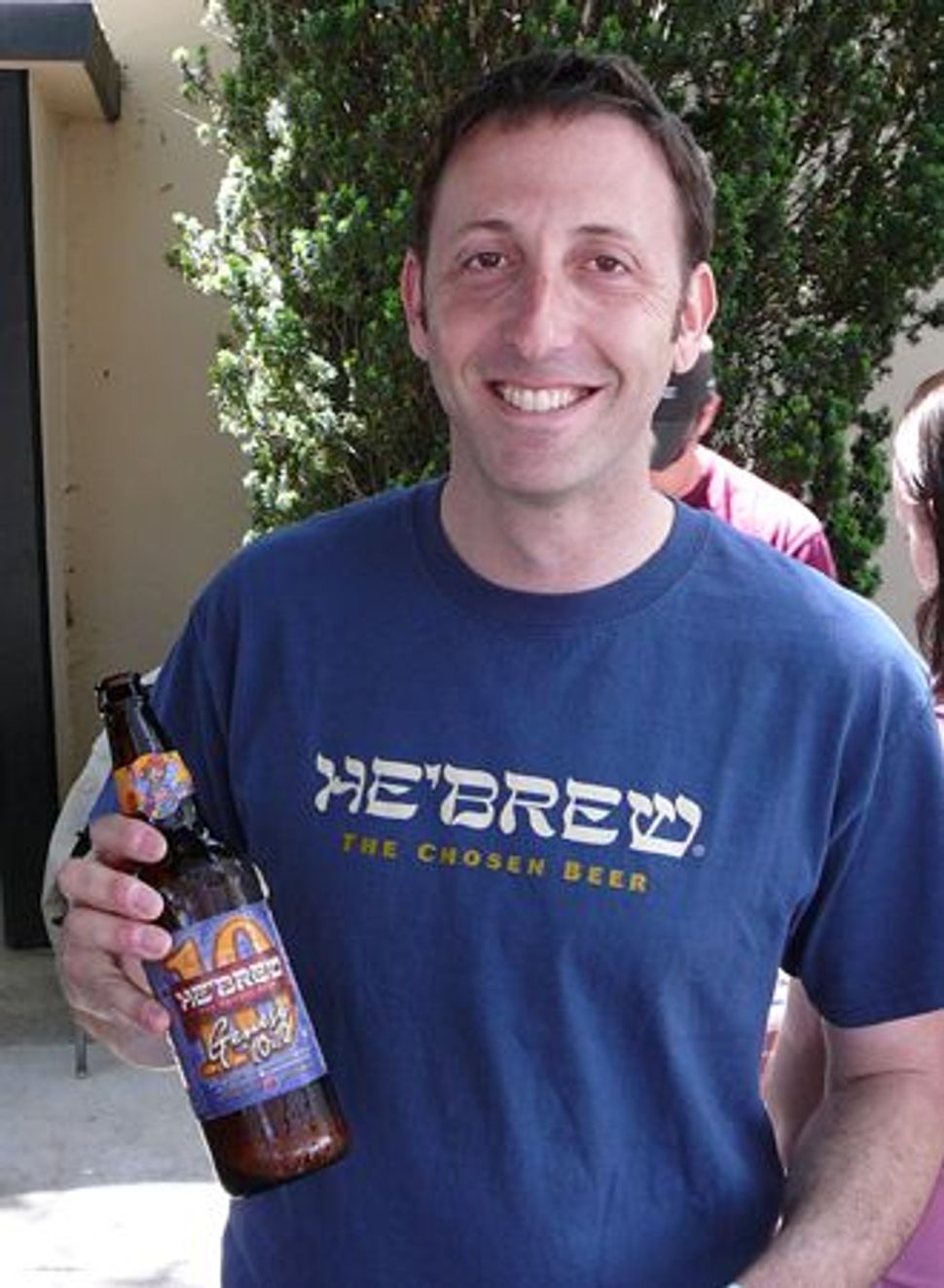 Nothing cools down a rash of steamy summer nights like a frosty pint of beer. Unless, that is, you are Jewish — because aside from the occasional l’chaim around the Kiddush table or on Purim night, Jews don’t drink. Especially not beer.

Of course, anyone who has ever witnessed their Uncle Barry getting soused on Heineken at a wedding, or attended college in the past 50 years, knows that the concept of Jewish sobriety goes only so far. And yet, the stereotype — the subject of both Woody Allen standup (“I’m not a drinker…. I had two martinis on New Year’s Eve and I tried to hijack an elevator and fly it to Cuba”) and scholarly inquiry, like a 1958 study, “Alcohol and the Jews,” by the Yale Center of Alcohol Studies — persists.

The study, which stated that in the late 1950s, alcoholism among Jews was virtually nonexistent, suggested that the prevalence of wine in Jewish rituals likely lessened Jews’ desire to drink recreationally. They drank, in other words — but in the context of Sabbath dinner, not at the pub. But Jeremy Cowan, who owns the 14-year old Shmaltz Brewing Company, has built his business on the opposite notion.

“I don’t think the stereotype [reflects society], but it is fun to play with,” Cowan said. With kitsch-heavy names like Genesis Ale and Messiah Bold, and a dancing rabbi for a logo, Shmaltz’s He’Brew beer is the first (and only) line of “Jewish celebration” craft beers. He’Brew products are all certified kosher — with the exception of this season’s Concord grape juice-spiked Rejewvenator — and have found their place at bars and bar mitzvahs across the country. Shmaltz, which in 2008 launched a second successful line of (equally kitschy, but not overtly Jewish) beer called Coney Island Craft Lagers, has arguably done more than most to foster Jewish-beer consumption. Despite the company’s success, however, there may be some historical weight to the whole “Jews don’t drink beer” thing, after all.

The practice of fermenting grains first flourished in Mesopotamia and Egypt, where barley and wheat grew readily along the lush river valleys. According to Iain Gatley’s “Drink: A Cultural History of Alcohol” (Gotham Books, 2008), beer was the preferred drink of Egyptian workingmen. And according to an Egyptian proverb circa 2200 BCE, “The mouth of a perfectly contented man is filled with beer.” The Israelites, on the other hand, likely consumed very little beer. With all those vineyards dropping sweet, fat grapes everywhere, wine was their preferred libation. “I imagine there was [also] some ‘We don’t drink what your group does, and vice versa,’ going on,” Cowan said. “And 5,000 years later, the stereotype remains.” 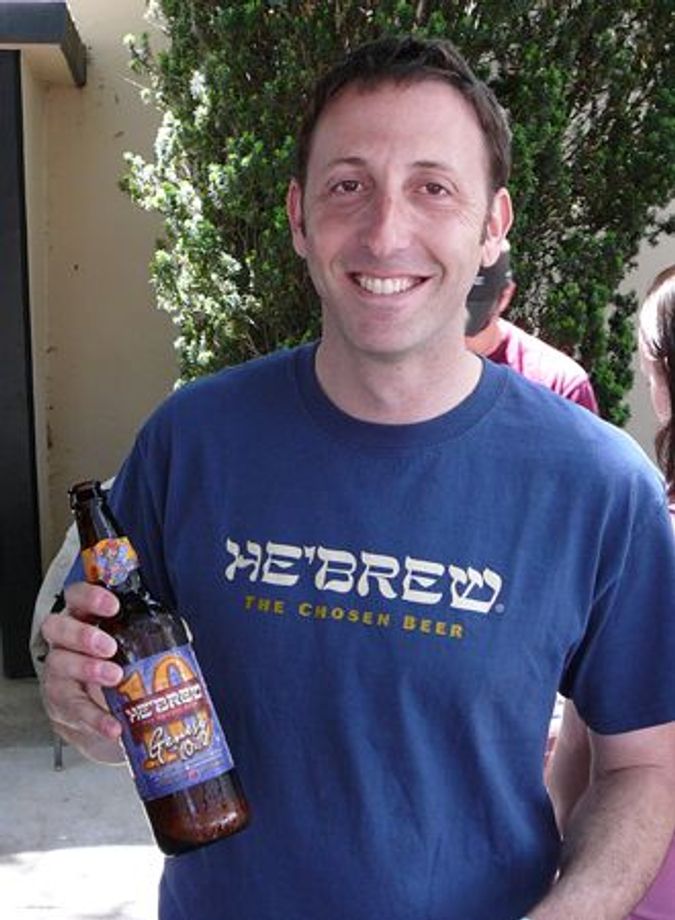 Flash forward many centuries: Beer brewing in the Middle East found its way to Europe, where it was heartily embraced and cultivated — often in explicitly non-Jewish spaces, like monasteries. In 16th-century Bavaria, brewers created a set of purity laws regulating the ingredients that could go into German beer. Ironically, a beer’s purity came to be marked by the six-pointed brewer’s star, which resembles exactly (but is not related to) the Star of David.

The notion of German purity would, of course, take a turn toward the maniacal in the hands of Adolf Hitler. Despite being a virtual teetotaler himself, Hitler fully recognized the importance of beer in German culture — which is why his first public attempt at establishing power was held in a brew cellar in Munich. Although his “Beer Hall Putsch” failed, it does not take a huge leap to understand how it, and German influence over beer culture as a whole, could become a psychological turnoff for Jewish consumers in both Europe and the States.

German dominance over American beer had actually begun years earlier, in the mid-19th century, when waves of German immigrants settled in such cities as New York, Philadelphia and Milwaukee, bringing their beloved lager-style beers with them. Interestingly, one of the most renowned, and the longest surviving of these brands, Rheingold Beer, was actually owned by a German-Jewish family.

Soon after settling in Brooklyn in 1850, Samuel Liebmann founded a brewery. Years later his great-grandson Philip co-developed the “extra dry” lager that would become the company’s greatest success. Rheingold Beer (as the company was later renamed) thrived for decades, buoyed by New York’s loyal working class and the company’s popular Miss Rheingold beauty pageant. But in the mid-1970s the company closed, unable to compete with national corporations, like Miller and Anheuser-Busch, which sold the mass-produced watery brews that would become synonymous with American beer by the end of the 20th century.

Today, beer in the United States is undergoing something of a flavor revolution, as consumers shift their devotion toward craft beers and microbrews. According to Maureen Ogle’s “Ambitious Brew: The Story of American Beer” (Houghton Mifflin Harcourt, 2006), “The volume of craft beer produced in the United States doubled between 1990 and 1994” — and the figure has most certainly continued to grow.

As a Jewish brewing family in the 19th century, the Liebmanns likely represented the exception rather than the rule. Today, however, nice Jewish boys — from Matt Cohen and Alan Newman of Vermont’s Magic Hat Brewery to Sierra Nevada’s Ken Grossman, Pete Slosberg of Pete’s Wicked Ale and Heartland Brewery’s Jonathan Bloostein — are at the forefront of the craft beer zeitgeist. As of yet, there is no brewers’ equivalent of the Jewish Vintners Association, in California’s Napa Valley, though Cowan of Shmaltz Brewing has joked about someday founding a “Jewish brewing conspiracy” society.

So why have so many supposed alcohol-abstaining Jews become key figures in the beer scene? Because the story of Jews and beer in this country is simply the story of American acculturation, writ tipsy. Two generations after that Yale study, Jews have largely adopted (and been adopted by) mainstream American culture — and their food and beverage choices reflect that shift. So whereas zayde likely preferred a sip of slivovitz when he drank, Jews today are just as apt as their non-Jewish neighbors to enjoy a frosty brew. “Beer is a great equalizer,” Bloostein said. “It goes beyond [religious differences].” With the end of summer’s shvitz nowhere in sight, those are refreshing words indeed.