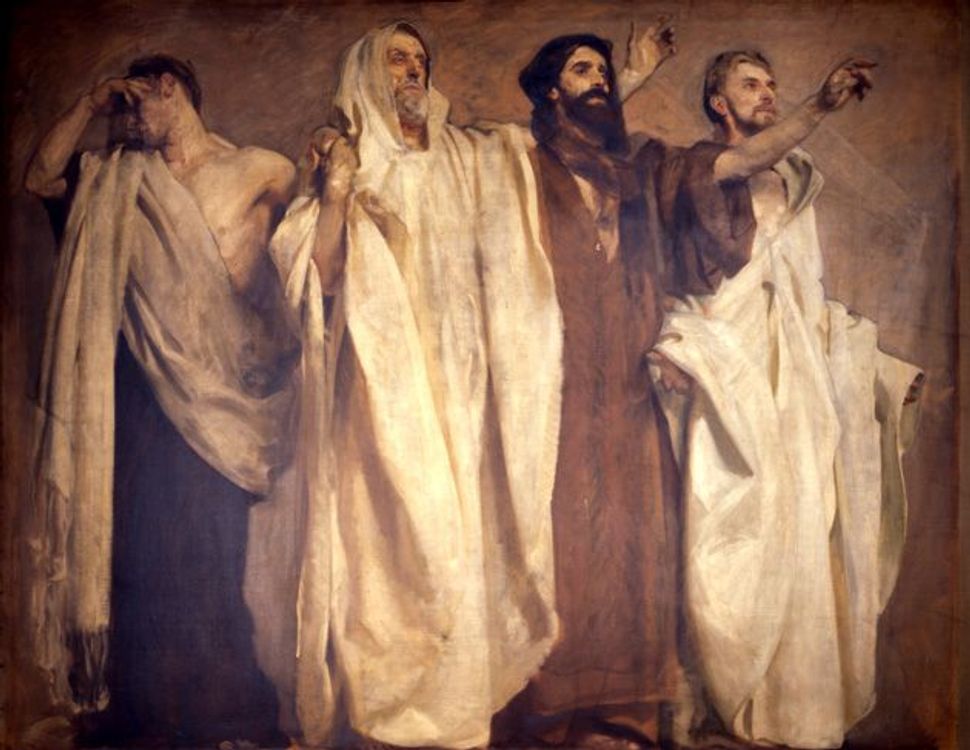 ?Frieze of the Prophets?: John Singer Sargent?s murals depict scenes from both Testaments. Image by COURTESY OF BOSTON PUBLIC LIBRARY

We Americans like to broadcast our religious allegiances, erecting crosses in the Mojave desert, adorning our public squares with nativity scenes and Hanukkah menorahs, and festooning our courthouses with replicas of the Ten Commandments. Even the public library, that most hallowed “shrine of letters,” has seen fit to celebrate the word of God — or, more precisely, the “Triumph of Religion,” the name given to the Boston Public Library’s celebrated mural cycle, painted by John Singer Sargent in the years prior to World War I. Its recent restoration, the subject of a fascinating book, “John Singer Sargent’s ‘Triumph of Religion’ at the Boston Public Library: Creation and Restoration” (Yale University Press), by the mural’s three conservators, not only reveals Sargent’s artistry, which for years had been obscured by soot and grime, but also brings back into circulation a controversy that attended the artist’s depiction of the relationship between Judaism and Christianity.

On the topmost floor of the classically styled Boston Public Library, in a vaulted space that many would later liken to an “American Sistine Chapel,” visitors encountered a sweeping and stunning array of images that depicted the evolution of religion over time. Working in gold leaf, papier-mâché, plaster and glass, Sargent evoked a civilization rich in angels, devils, gilded lions, tightly coiled serpents, shimmering zodiacs and radiant sun disks, as well as a monumental Ten Commandments whose do’s and don’ts were rendered in Hebrew lettering. Over the course of 24 years, between 1895 and 1919, the artist assembled a cast of characters that ranged from Moloch and Astarte, Egyptian pharaohs and oppressed Israelites, to Jeremiah, Micah, Moses and Jesus. With something for everyone, Sargent’s mural cycle, which covered the ceiling in addition to the walls, dazzled the eye, lifted the spirit and made the library’s patrons, many of them immigrant Jews, feel entirely welcome.

Sargent’s paintings of the synagogue and the church, the last components of his mural, were something else again. Where everything that had gone before seemed new and fresh and congenial, these two panels struck a decidedly old-fashioned, retrogressive and sour note. In Sargent’s rendering, the “Synagogue,” its musculature oddly masculine (and peculiar to him), is shown falling to the ground. Her crown is askew, her scepter broken, her eyes blindfolded and her nose rather sharply pointed. His “Church,” in vivid contrast, is an exercise in loveliness. Her eyes unfettered, her features — supposedly modeled after Sargent’s beloved niece, Rose-Marie Ormond — delicate and appealing, she gazes boldly at the viewer, welcoming him into her embrace. Uncritically echoing age-old representations of Judaism as recumbent and defeated in contrast to the resplendent and triumphant figure of the Church, Sargent’s rendition opened up a Pandora’s box of criticism, transforming public reception in the process: Unfailingly uniform praise now gave way to what some contemporaries at the time called an “agitation” and others a “storm centre.”

“If one were an orthodox (sic) Jew, a rabbi or a cantor, it might be a little distasteful to have this middle-age fashion of depreciating his ancient religion in a building supported by public taxation,” commented Frederick William Coburn, the Boston Herald’s art critic, in October 1919, throwing down the gauntlet. But one didn’t have to be any of these things to feel aggrieved. To be sure, the painting occasioned the fiercest criticism from within the Jewish community. From Boston to Louisville, Ky., and lots of places in between, American Jewry weighed in, insisting that the painting was a real slap in the face, a “calumny to [its] honor” and a distasteful example of “clear, sectarian bias,” made all the more egregious because of its venue. Many non-Jews, Protestants especially, also joined the fray, fearful lest the painting erode the carefully cultivated spirit of good will between well-meaning Christians and receptive American Jews.

Representatives of the Greater Boston Federation of the Massachusetts Federation of Churches, as well as those from the Massachusetts branch of the YMCA, strongly disavowed Sargent’s painting, expressing the view that “Protestants should sympathize with the Jews in their feeling toward this picture. It represents the Jewish faith as decadent. As Christians we are ashamed of what some Christians do.” And then there were those, both Jews and non-Jews, who insisted that the painting simply ran counter to the tenor of the times, to what Massachusetts State Rep. Coleman Silbert called its “broad spirit of Americanism.”

The library’s board of trustees was quick to dismiss mounting disapproval as a “tempest in a teapot,” hoping that the imbroglio would go away. But it simmered for five long years, embroiling politicians, journalists, art critics and poets as it ran its course. While the Massachusetts legislature debated the propriety, much less the constitutionality, of using eminent domain to remove the mural from its moorings and to donate it to a public school, Louis L. Norman, a poet, put pen to paper:

What mean you, master of the brush and the tube?
Whence has your genius fled? You from whose brain
The rapt seraphic seers of Israel
Leaped on the canvas full grown into life.
Think you our youth will mutely close their lips
When you weave lies into your coloured text?

Sargent, for his part, remained characteristically aloof from the proceedings. Said by The New York Times to despise all manner of “fuss, flummery and the ubiquitous interviewer,” the pre-eminent painter kept a low profile and did little to calm the troubled waters. Writing privately to a friend in October 1919, Sargent acidly noted, “I am in hot water with the Jews, who resent my ‘Synagogue,’ and want to have it removed — and tomorrow a prominent member of the Jewish colony is coming to bully me about it.” Three years later, a slightly more chastened Sargent sought to make amends. “No reflection on the Jewish race was intended,” he was quoted as saying in American Art News, which went on to explain that the painter had acted in only good faith, innocently drawing on the iconographic precedents he had witnessed at the cathedrals of Notre-Dame in Paris and Rheims.

The brouhaha eventually ran out of steam. A bill that had been successfully introduced into the Massachusetts legislature authorizing the use of eminent domain to remove the mural was repealed in 1924. By then, American Jewry’s energies were taken up with so much else: the aftermath of World War I, Henry Ford’s fulminations, a synagogue building boom.

And so, Sargent’s paintings stayed where they were, eventually accumulating layers of dust and corrosion and fading from view. Now that their luster has been restored, it’s worth remembering why they were once the talk of the town.