A Writer During Apartheid, and After 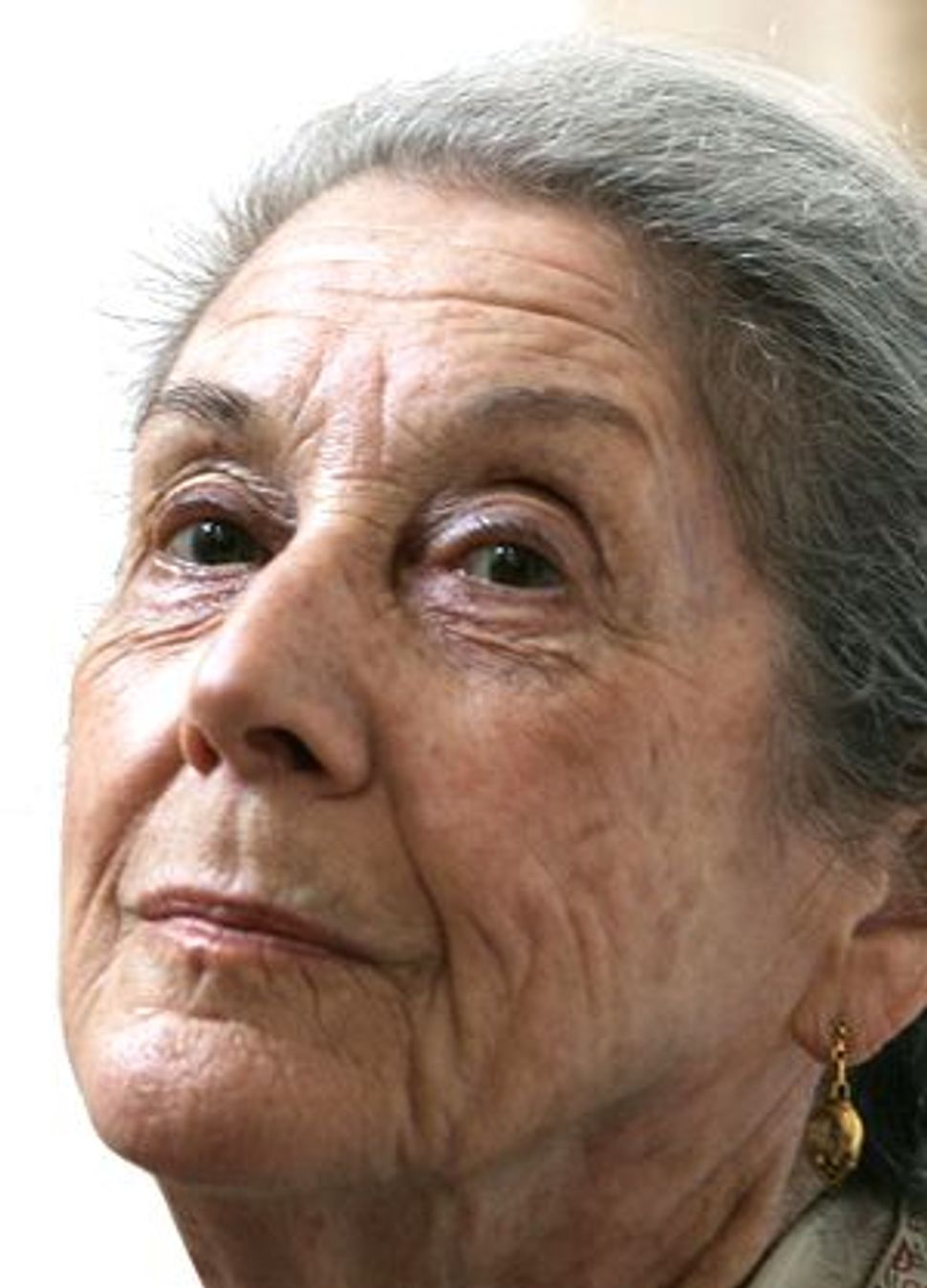 ‘Could Philip Roth erase the tattoo of the Nazi camps from under the skin of his characters?” 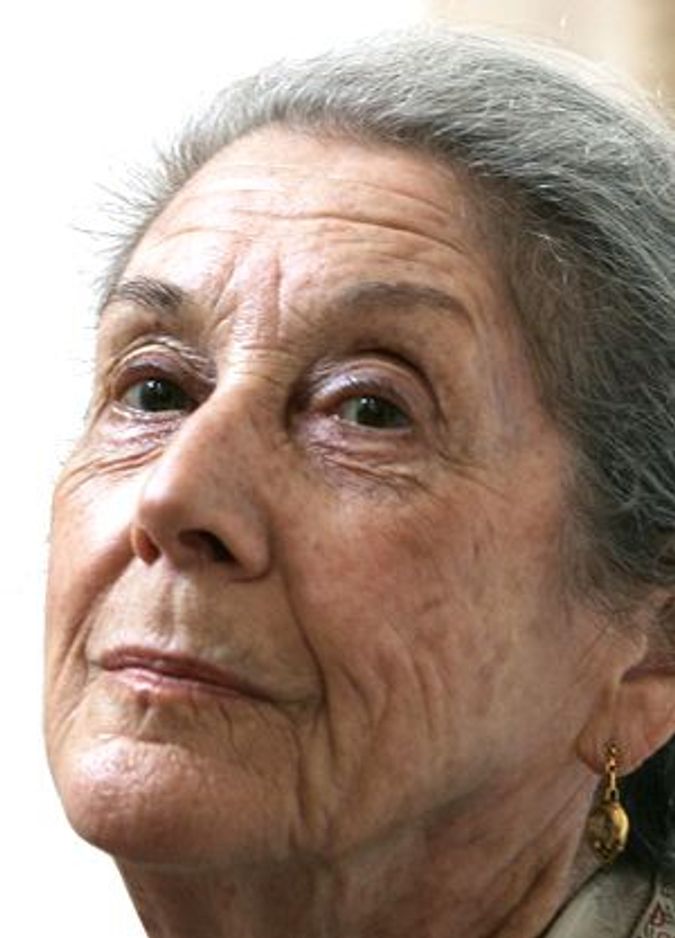 Nobel laureate Nadine Gordimer rhetorically asks, illustrating her assertion that “none of us can… ‘choose our subjects’ free of the contexts that contain our lives, shape our thought, influence every aspect of our existence.”

This reference to Roth is contained in “Telling Times,” an almost one-stop shop, 752-page collection of Gordimer’s nonfiction. The context influencing Gordimer’s own choice of subject is, of course, South Africa. Documenting her engagement over more than six decades with private and public life during and after colonialism and apartheid, this tome includes reflections on, among many other things, censorship and freedom of expression, poverty, African countries newly celebrating independence and, more recently on the end of communism, AIDS and globalization.

Describing hers as “an era when, in [Bertholt] Brecht’s words, ‘to speak of trees is treason,’” Gordimer was profoundly conscious of her social, racial and cultural positioning. Adopting as her credo a statement by Albert Camus, “It is from the moment when I shall no longer be more than a writer that I shall cease to write,” she consistently intended her writing to be politically relevant.

Reading “Telling Times,” it is clear that her understanding of her usefulness to the anti-apartheid cause was accompanied by minimal engagement with Jewishness. Gordimer was the child of a Jewish immigrant from (as we know from genealogists) Zhagar, Lithuania. Together with all the other Jews of the area, any remaining family members who had waited too long before leaving for Africa would probably have been butchered in Zhagar’s town square on Yom Kippur 1941.

Given this background, it is curious that she associates Roth’s formative influences with the Holocaust while her own writing — shaped as it was in the context of apartheid, reminiscent of Nazi Germany’s Nuremberg Laws — fails to engage in any similarly explicit way with post-Holocaust Jewish identity. Gordimer obscured her Jewishness, identifying instead with the dominant white European group that her Anglo-Jewish mother aspired to be part of (even while critiquing its racism).

The divergent immigrant origins of Gordimer’s parents created conflict in the writer’s childhood home. Her mother belittled her father who, as an Eastern European Jew perceived as less-than-white in South Africa’s colonial context, threatened her integration in the mining town: “[H]e came from people who ‘slept on the stove,’” she’d say. Thus denigrated, her father “never spoke of his Old Country and I, no doubt influenced by my mother’s dismissal of his lowly foreign past, never asked him about it,” Gordimer wrote. “I don’t know where, in his country, [my father’s village] was, only the name of the port at which he left it behind. I didn’t ask him about his village. He never told me; or I didn’t listen,” the autobiographical fictional narrator says in a short story published elsewhere.

Representations of Jews in Gordimer’s early fiction strike the same derisory note her mother sounds when she describes a Jewish shopkeeper’s wife as having “the blunt ugliness of a toad.” Her mother’s influence was strong. Writing about Proust, Gordimer describes her childhood as a “lonely mother-love-dominated” one in which, experiencing only a tentative sense of belonging, and being overcome by “anxiety states,” she continuously “bolted” — literally from school, and subconsciously into “a dream-defence, an escape.”

This escape included Gordimer’s early turn to writing. In her Nobel acceptance speech (not included in this collection), she partly attributes the beginning of her career to childhood attempts to comprehend the social hierarchies and racisms she observed. In “Telling Times,” she describes her father’s social dislocation and his mimicking of the town’s racism: “[E]ven an immigrant from a people who slept on the stove was provided with someone… to regard as beneath him.”

Observing the father shouting at a black man, her autobiographical fictional narrator says: “I saw there was someone my father had made afraid of him. A child understands fear, and the hurt and hate it brings.” 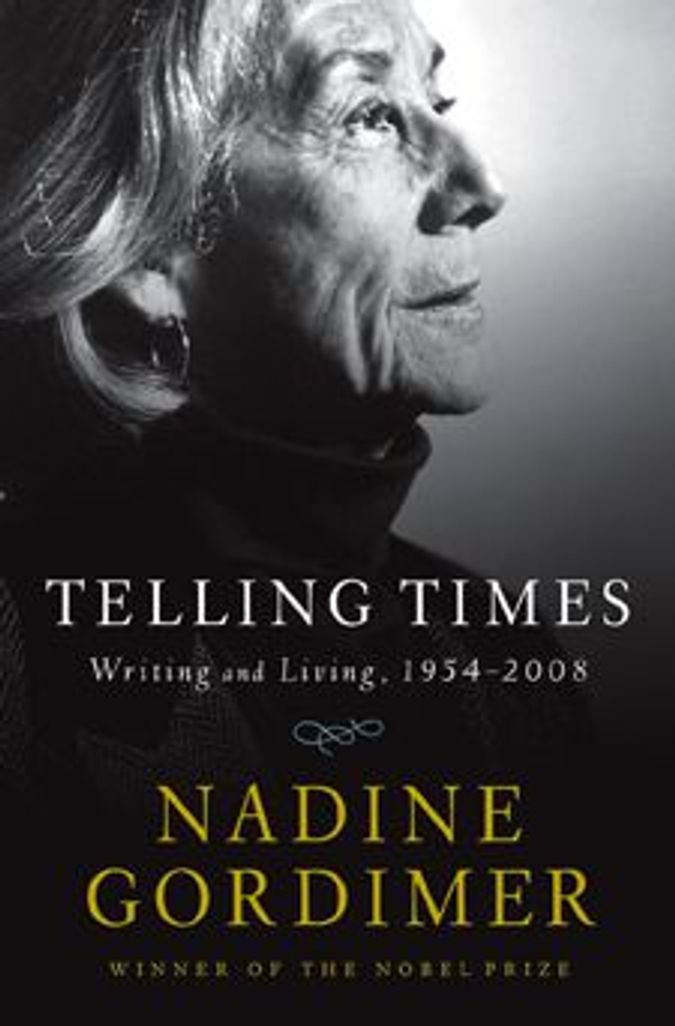 Seeking to escape the anxieties produced by this hurt at home and on the streets, Gordimer entered a dialogue with herself about her environment, becoming the “witness to the unspoken in my society.” Her initial empathy with her marginalized father combined with her subsequent accusatory distance from him to produce the literary and political career for which she is internationally celebrated.

The relationship between Gordimer’s Jewish minimalism and her political identity becomes clearer when read in relation to her views on women’s writing and, particularly, South African writer Olive Schreiner’s feminism. Criticizing Schreiner’s “wronged sense of self, as a woman, [seeking] liberation,” Gordimer denied the relevance of feminism (“a secondary matter”) to freeing South Africa’s black majority from white-minority rule: “I suppose one must allow that she had a right to concern herself with a generic, universal predicament: that of the female sex,” but “the women issue withers in comparison with the issue of the voteless, powerless state of South African blacks, irrespective of sex,” she wrote in 1980.

Denying feminism’s relevance in the actual domain of anti-apartheid politics, Gordimer also denied the relevance in the imaginative domain of her own identity as a woman. Justifying her decision to withdraw from the shortlist of the English Literature Orange Prize because it recognized only women writers, Gordimer described the writer as “a special kind of androgynous creature, all sexes and all ages,” and as “heterogeneous in our imagination.”

Observing a traditional African circumcision retreat ordinarily attended by only “mature men and pre-pubertal girls” “as a white woman whose sexuality is not codified under the same sanctions as blacks,” Gordimer became “unsexed.” “If I was not a woman, among them, we were so fully human, there together,” she noted, celebrating the dissipation of her whiteness, even if it meant losing her identity as a woman.

Gordimer similarly elevated the obliteration of her father’s background to an anti-apartheid principle. For Gordimer, speaking, as Roth did, of Jewishness was as irrelevant to the political struggle as was Schreiner’s feminism.

In 2001, after reading “Family Sayings” (Arcade Publishing, 1989), Natalia Ginzburg’s autobiographical exploration of the assimilated Jewish Ginzburg family, Gordimer finally allowed herself to open the “overgrown” “cul-de-sac” in her life. “I begin to see that, involved as I was in the clamour of racism and anti-racism, I did not hear that other voice whose significance I’ve never pursued,” she wrote.

Belatedly pursuing her father’s voice, the result is sadly hollow. She is too late to hear the voice of the man who went on Yom Kippur to the “ugly little” synagogue that he helped to maintain. Had Gordimer accompanied him, free of her mother’s derision, she might have heard him recite yizkor, the service in memory of the dead. Nothing in “Telling Times” indicates if Gordimer’s grandparents and cousins thus remembered were murdered in Zhagar’s town square. At the same time, the silences around her father’s Lithuanian background enduringly imbue her lifelong pursuit of nonracism and freedom from oppression for all — including the celebrated writer seeking that freedom by concealing her anxieties and Jewishness.

Claudia B. Braude is the editor of “Contemporary Jewish Writing in South Africa: An Anthology” (University of Nebraska Press, 2001).

A Writer During Apartheid, and After