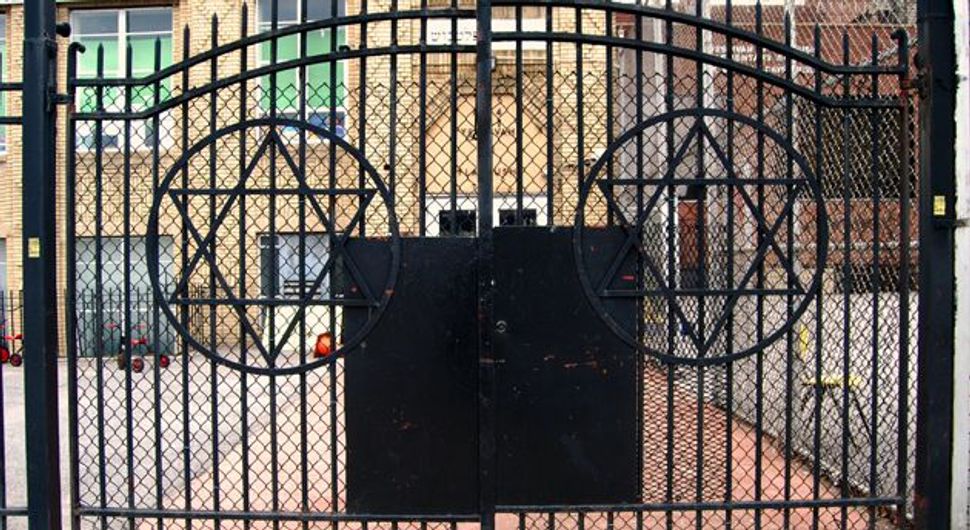 Sea Change: The Yeshivah of Flatbush, once a school dominated by Ashkenazi Jews, is now composed primarily of Syrian Jews. Image by PAUL LOWRY

In the days since Jews first put down roots in the Midwood section of Brooklyn, much has changed. The population — once mostly Ashkenazi — is now dominated by Sephardic Jews, most of whom emigrated from Syria. Avenue J, the main drag, offers sushi as well as kosher meat, and the synagogues of Coney Island Avenue sit alongside auto body shops, a discount movie theater and a Pakistani community center.

But much is the same. Boys in yarmulkes crowd the subway platform, and girls in long skirts push strollers through the summer heat. Hebrew lettering adorns many storefronts, tidy homes line shady streets and Joel Braverman High School — a hulking gray-brick fortress — hugs the corner of 16th Street and Avenue J.

Braverman, the high school of the Yeshivah of Flatbush, has a long, proud tradition as one of the city’s most highly regarded Modern Orthodox institutions. Founded in 1927, it has since graduated plenty of Ivy League-bound students as well as Nobel laureates and celebrities, such as fashion designer Isaac Mizrahi and playwright Wendy Wasserstein.

While there are no exact numbers on the breakdown of Sephardic and Ashkenazi Jews in Midwood or at the school, the Syrian Jewish population of Brooklyn — now estimated at 75,000 — has been growing at a rapid clip, while Ashkenazi Jews have been moving steadily to towns on Long Island and in New Jersey. Each group is diverse unto itself, and over time the differences between them have pivoted around class, ethnicity, familial expectations and religious practice. For decades, these groups have coexisted at the Yeshivah of Flatbush, which the Sephardic students, once a minority, now dominate. The two groups have parallel minyanim at the school, where the larger room once used by the Ashkenazi students is now where the Sephardic minyanim meet.

“Yeshivah of Flatbush is fueled by the neighborhood around it, and there’s no doubt the neighborhood has changed in recent years,” said Dennis Eisenberg, the school’s vice president. “But our core mission has not changed: to support academic excellence.”

Stuart Zweiter, director of the Lookstein Center for Jewish Education in the Diaspora at Bar-Ilan University, acknowledged the significant differences between the Sephardic and Ashkenazi communities, but largely agreed with Eisenberg. “Within the community, there are cultural differences,” he said. “But in terms of the core education, rightfully, they want to deliver the exact same thing.”

According to school officials, some decades ago, the high school instituted the parallel minyanim and revamped part of its teaching to be more ritually inclusive. “We had to make sure our halachic curriculum reflected Ashkenazi and Sephardic customs, and that’s something every school should be doing — even if it’s just 10% Sephardic,” said Joel Wolowelsky, a longtime Braverman teacher. When asked about other curricular adjustments, Wolowelsky said that “nothing else in the curriculum would affect particular Ashkenazic or Sephardic approaches to anything.”

But David Shasha, a Sephardic scholar and activist who graduated from Yeshivah of Flatbush in 1979, said that when he attended the school, Ashkenazim who privileged their own traditions ran it, despite a growing Sephardic minority within the student population. “I learned no Sephardic history growing up,” he said. “My Jewish history teacher would tell us explicitly, ‘You have no history; your rabbis are not important.’”

According to Shasha, this is not specifically a strike against the Yeshivah of Flatbush, but rather a small piece of a widespread trend. “There is not in the world a single Sephardic curriculum anywhere,” he said. He contended that Magen David, the Brooklyn yeshiva that is historically Sephardic, also has no substantial Sephardic studies curriculum. (While no one at Magen David could be reached for comment, the school’s website says that the curriculum focuses on passing on “Sephardic heritage with serious emphasis on Syrian minhagim [customs] keriah [cutting of garments as part of the mourning practice] and halachot.”)

But 1972 Braverman graduate Raymond Harari, a rabbi at a large Sephardic congregation and the institution’s current rosh yeshiva, or head of school, recalled a different experience. When he was a student, he said, Sephardic teachers were on the faculty, a Sephardic minyan was instituted and — in terms of divisions between Ashkenazi and Sephardic students — “we didn’t even think along those lines.”

More than 30 years after Shasha’s graduation, there are some signs of change. In addition to Harari, Jack Rahmey, the Yeshivah of Flatbush’s president, is a prominent member of the Sephardic community. A Sephardic history course is available as an elective. A classroom poster, “Yeshivas Through the Ages,” shows the geographic diversity of the Diaspora, with illustrated examples of historical yeshivas all over Europe (including Spain), as well as in Syria, Egypt and West Africa.

“The school definitely knew it was balancing two separate cultures,” said Jordan Reimer, who graduated from Braverman in 2003. He remembered Sephardic writings as a component of Hebrew literature classes, but said that he recalled Jewish history classes as primarily covering the Ashkenazi experience. (Harari explained that while modern Jewish history classes spend a significant amount of time on Soviet Russia and the Holocaust, there is also a unit on the Golden Age of Spain.)

Several former students noted that while there were no tensions between Sephardic and Ashkenazi students, the two groups routinely self-segregated when choosing an academic track, which determined who was in most of their classes. (According to Harari, this changed four years ago, when the school switched to a new method of tracking.) Additionally, recent alumni said, Sephardic students tended to be from the neighborhood, while Ashkenazim were mostly commuters.

“There wasn’t as much mixing as you would expect,” explained 1999 graduate Jenny Margulies, remembering the school being about half Sephardic and half Ashkenazi. “Culturally, we were different.”

Harari echoed this idea, adding that a heterogeneous student body is something to be celebrated. “We want the school to remain a school that respects and educates both traditions,” he said.

The general message from the Yeshivah of Flatbush administration seemed to be that all students receive the same education. Wolowelsky pointed to the academic accomplishments of students from both groups. Last year, for example, two students were admitted to Princeton University, one Ashkenazi and one Sephardic. “People want to talk about Sephardic versus Ashkenazi, but it’s not even a major division anymore,” he said.