Taking the Pulse of Young Jewish America on Hot-Button Issues 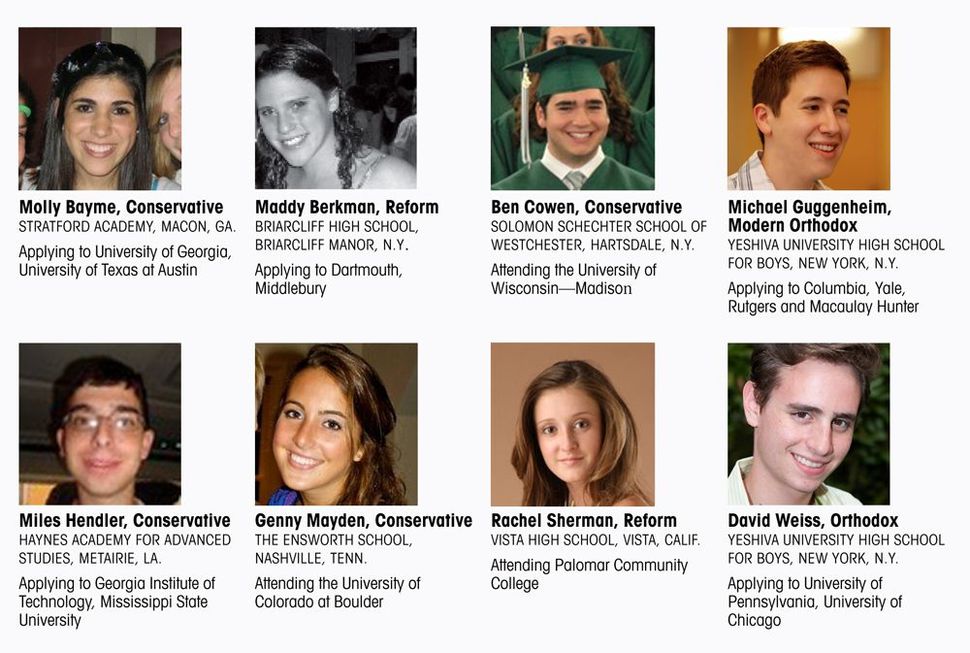 Where do Jewish teenagers across the country stand on issues bound to shape American Jewry? The Forward’s Allison Gaudet Yarrow polled 17- and 18-year-olds entering college within the next year, and asked them their thoughts on Jewish identity, community, education and other hot-button topics. One thing that became overwhelmingly apparent is that today’s young people are proud of their heritage and, in most cases, plan to continue some sort of observance later in life. Here’s what some of the students told us:

What are the important elements of a Jewish education?

Miles: We should know how Judaism got to be the way it is in the biblical and in the modern sense. People support Israel blindly. You can want to be in the land the Torah was talking about but not [support its] government.

David: The Hebrew alphabet, the story of the Exodus, even matzo ball soup… associations with culturally nostalgic items [are] vital to the survival of Judaism amongst Jews who come dangerously close to assimilating into secular culture.

Rachel: Jews are taught to remember, so nothing will be forgotten.

What does “Jewish identity” mean to you?

Miles: I started wearing a yarmulke [in eighth grade] because I knew if I [did], I’d find Jews. I live in the South. There are people who have the wrong idea of Judaism or don’t know about it. I wear a yarmulke to let them know they can talk to me about Judaism.

Ben: It means being part of the secular world but still having things that differentiate me.

Molly: It’s important to know who you are and where you come from, especially for people growing up in small towns.

Who are your friends, and what qualities do they have?

Miles: I feel more of a connection with Jewish people, because we have that immediate thing we share.

David: I have never, until this summer, had a non-Jewish friend. The fact that I had trouble associating with non-Jews at [a summer program at] Columbia who were similar to me in so many ways really shocked me. I was able to become friends with atheists, Christians and Buddhists, which was really an incredible experience.

Genny: My friends are mostly non-Jewish.

Ben: Because I’ve been involved in so many Jewish organizations, I don’t have any non-Jewish friends.

Molly: I don’t think religions really matter when it comes to friendship.

Rachel: Most of my friends are non-Jewish, but they do not treat me any differently.

Michael: Most of my friends are Jewish, although one of my closest friends is a Muslim. I have several non-Jewish friends, but, alas, I have grown up in the Jewish bubble.

What are your feelings about the LGBTQ community in regard to the Jewish community?

Miles: I know people who are religious and homosexual. I don’t see any reason to keep them separated.

David: Homosexuality is inherently problematic, due to the scriptures in the Torah that forbid it. When the world’s brightest Jewish minds realize that this is only becoming more pertinent, they will find a realistic solution, if there is one.

Ben: Gay marriages are perfectly fine. I don’t see why they shouldn’t be allowed.

Molly: Everyone has the right to choose [his or her] own sexuality. People should respect their decisions.

Michael: The fact that many in Orthodoxy feel that it is okay to actively discriminate against gays — a word, coincidentally, that they often use to describe LGBT people — is sickening. Thankfully, it appears that Modern Orthodoxy is slowly beginning to come around to the fact that being gay is not some disease that therapy can cure.

Would you call yourself a feminist?

David: Women who feel that they need to put on tefillin, read the Torah and engage in other religious practices restricted to males are foolish and insecure about their roles in society. Ironically, the activities of feminist Jewish women are hindering them from becoming fully integrated into Jewish life.

Genny: My mother is a feminist. I believe in equal rights for all people, and women are just as capable of amazing things as men are.

Molly: I attended an Orthodox synagogue in Israel. Women were pushed in the back. Men sat in air conditioning. I don’t think that’s right.

Rachel: We are no different, except for our bodies. Gender should not be a question in the household or workplace.

Michael: I would.… I do not believe in any of [the Torah’s or Talmud’s] restrictions on women’s participation in Jewish activities, including reading from the Torah, leading a prayer group or becoming a rabbi/rabba. My family rabbi fully endorses women dancing with a Sefer Torah in the women’s section on the holiday of Simchat Torah.

What kind of food do you eat?

David: If [foods] are not certified kosher, I will not eat them.

Ben: I eat kosher meat or dairy or vegetarian.

Maddy: We eat a lot of local and organic food. Anything healthy, and we have it.

Rachel: I eat a lot of junk food, but when I get the chance, I buy organic products. I am not what I eat.

Have you been to Israel?

Genny: I went with a group from Nashville, and my Jewish identity was completely transformed. I felt more connected to the religion, so I committed to becoming more religious.

Ben: I’ve been five times. I feel completely safe in Israel and very welcome there.

Maddy: I’ve never been to Israel, though I’m looking forward to going eventually.

Do you expect college to make you more Jewish, or less?

Miles: I’ll probably find safety in the fact that there are a lot of Jews. If I go to a college without a big Jewish community, I’ll be just fine.

David: My ultimate goal in college is to play a larger role in the global Jewish community. I want to attend a secular institution, because it will contribute to my character.

Molly: I’m going to try to be a part of a Jewish sorority. I want to meet more Jewish kids.

Michael: I expect it to make me openly exhibit some of my less-than-Orthodox beliefs, such as my observance in the Sabbath. In the short run, college might make me less Jewish, but even if it does, I doubt it will affect my Judaism for the long run.

Taking the Pulse of Young Jewish America on Hot-Button Issues