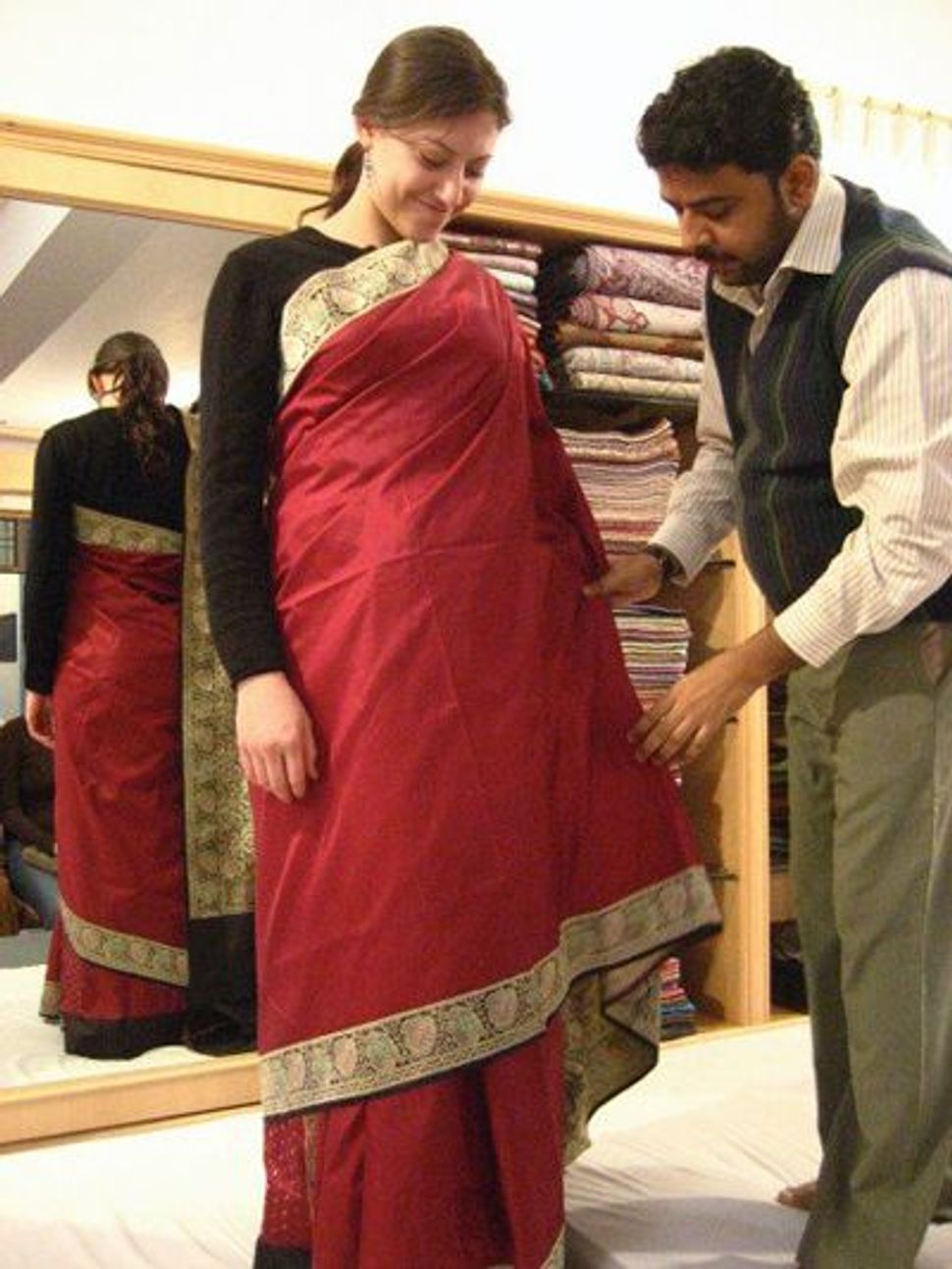 Wrapped: Bukspan tries on a sari during a trip to India. Image by COURTESY OF SHARON BUKSPAN 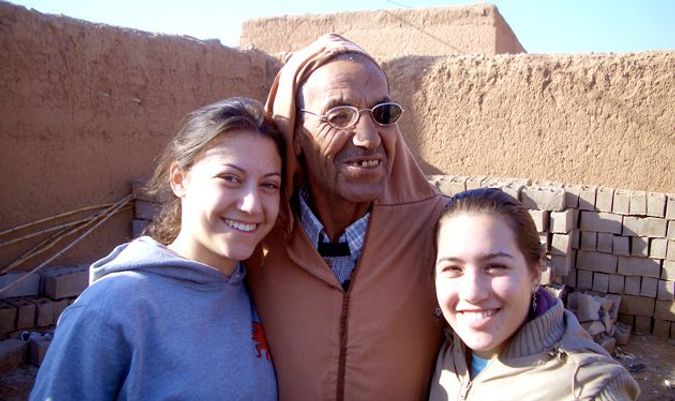 Globe-Trotters: In many of the gap year programs, students travel extensively to learn about Judaism throughout the world. Above, Bukspan (left) and a fellow gap year student pose with a Muslim man from the Berber village of Arazan during a visit to Morocco. Image by COURTESY OF SHARON BUKSPAN

As the daughter of Israeli immigrants, Sharon Bukspan always knew she wanted to spend a year in Israel before attending college, mostly to spend time with family members whom she saw sporadically after her parents moved to the United States.

One night this summer, she was riding the New York City subway with her MCAT tutor, when she was surprised to learn that he, too, spent a gap year in Israel.

Bukspan, a self-described “secular Jew” who values Judaism and Jewish culture, and her tutor, who is Orthodox, reveled in the pervasiveness of their shared experience. “We were like, ‘Wow, everyone has gone to Israel,’” said Bukspan, 21, who is now a senior at Johns Hopkins University. “The only way to explain it is that it has become a phenomenon. It’s just what we do.” 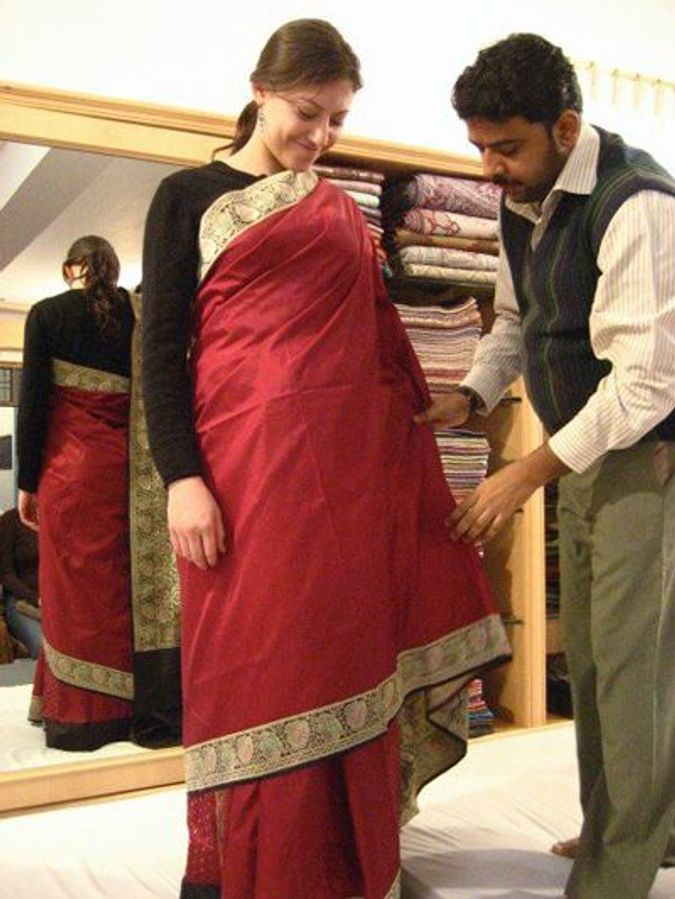 Wrapped: Bukspan tries on a sari during a trip to India. Image by COURTESY OF SHARON BUKSPAN

Once the pursuit of Orthodox Jewish high school graduates, gap years in Israel have become increasingly popular among Jewish students across the denominational spectrum.

“Now if you’re not Orthodox, you’ve got at least 10 options, if not more,” said Avi Rubel, director of North American operations at Masa, an umbrella group that coordinates yearlong programs in Israel. “You can come and find something and be with kids just like you.”

The cost of the various programs range from a few thousand to over $10,000, and need-based scholarships are offered.

Bukspan, a graduate of the pluralistic Abraham Joshua Heschel School, opted for Kivunim: New Directions, a program started in 2006 by Heschel founder and director Peter Geffen. Students are based in Israel but travel extensively: Bukspan visited Russia and Lithuania, Spain and Morocco, India, Italy, the Czech Republic and Hungary.

“The focus is really to expose its students to what Judaism is beyond the U.S. and Israel,” she said.

Rubel said that the growing number of students spending a year in Israel stems from overall excitement and from interest in taking a gap year. In recent years, admissions directors at Harvard and Princeton universities publicly expressed support for gap-year study, and some students view taking a year off to pursue meaningful activities as a leg up.

“That’s allowed us to grow the field in Israel,” said Rubel, who said that Masa recruits heavily. Besides visiting schools and youth groups, the organization works with college advisers and, for the past four years, has brought college counselors at public, private and parochial schools to Israel. “Masa’s goal is geared around getting people who wouldn’t come otherwise,” he said.

For Avi Gordon, 22, an alumnus of the Conservative movement’s Young Judaea Year Course, spending a gap year in Israel was an option but certainly “not a given.” The Harrisburg, Pa., native went to Young Judaea camps and attended public high school, where the majority of his friends went straight to college after graduation.

Going to Israel “wasn’t the norm where I lived,” said Gordon, who now works as the East Coast campus coordinator for the Israeli advocacy group StandWithUs. He graduated from SUNY Binghamton in May. Spending the year in Israel, he said, “made me realize, I’m so passionate about a country I’m emotionally attached to.”

Freida Gottsegen, an independent educational consultant in Atlanta who went on a Masa familiarization trip in 2009, carefully selects the students she recommends for a gap year. Overall, she agreed that colleges are increasingly embracing gap-year study. But she noted, “Some are just not gap-year students.”

Since her Masa trip, Gottsegen has suggested a gap year in Israel to four students. And while many of her clients in private and public schools are not Orthodox, “there’s so much that Israel has to offer that is nonreligious,” she said. “The pages of the history books are right there, whatever the religious denomination is.”

While benefiting from the overall boon in gap-year popularity, Israel programs are also working to strengthen Jewish identity among students. Like proponents of Jewish summer camp and TAGLIT-Birthright Israel, some say a gap year in Israel goes a long way toward building Jewish identity and creating the next generation of Jewish leaders.

The year gives students “the tools to make decisions” as Jewish adults, said Yossi Garr, director of Native: The College Leadership Program in Israel, where students spend half the year studying in Jerusalem and the other half volunteering around the country. Like Rubel, Garr said his numbers are up. In August he expects nearly 95 students, up from an average of 35 to 40 students several years ago.

“Exactly when the change happened or why it took place, it’s a hard question,” he said. “I think it really came from this realization of how important this was.”

Bukspan, who plans to get her master’s degree and then attend medical school, said she benefited from a program that focused not only on Israel, but also on Jewish life around the world.

Gap years in Israel, she said, are not just part of Orthodox Jewish life. “It’s a part of all Jewish life,” she said. “It’s really an expression of how things have evolved.”