Torah Raps:Teaching the Bible Through Music 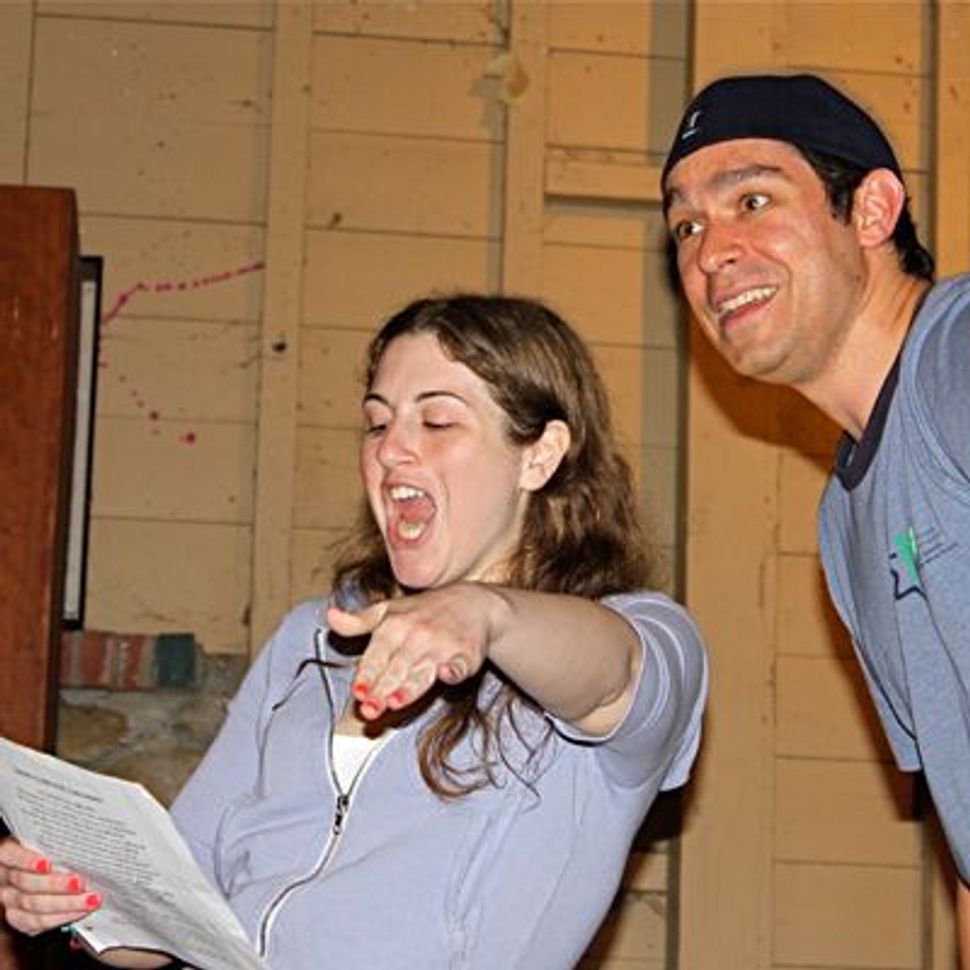 Bar and an audience participant perform a rap titled ?David and Goliath? at Camp Ramah Berkshires. Image by NAVIT ROBKIN 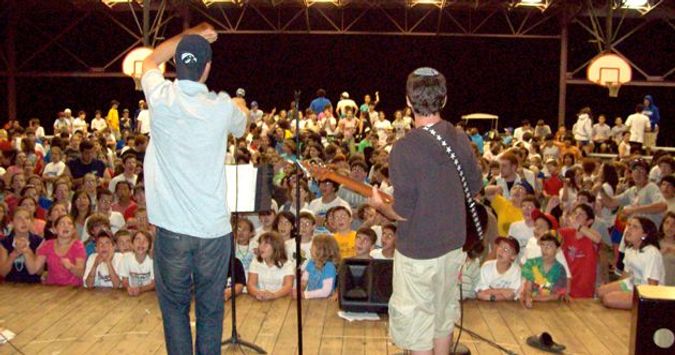 Bible Hip-Hop: Bar (left) and Salzberg perform in front of about 450 campers at Camp Ramah Darom in Georgia. Image by COURTESY OF BIBLE RAPS NATION

They may not be Big Boi and Andre 3000 (or even Matisyahu), but to the kids at Jewish day schools and camps who get to rap with Matt Bar and Ori Salzberg, these young Jewish educators are hip-hop stars.

The two men call themselves Bible Raps Nation and travel from Jewish camps to Jewish schools to Hillel chapters on college campuses, connecting students with Jewish texts by writing rap music about the Bible.

The focus of the raps is definitely not the stuff of which other hip-hop music is made: There’s no talk of thugs or “hos.” Instead, Bar and Salzberg sing about Jacob and Joseph, Noah and Moses, Jewish values and Jewish pride.

They formed BRN two years ago, after they met in Jerusalem, and their approach is proving popular among Jewish educators, who are always looking for innovative ways to engage their students with Jewish texts and ideas.

In each of the past two years, when BRN went to the Hannah Senesh Community Day School, “it was electrifying for our students,” said Jessica Lissy Trey, Judaic studies coordinator at the Brooklyn school.

“It was like having rock stars come visit us, especially for the younger kids,” Lissy Trey said. “And musicians are inherently cool.” 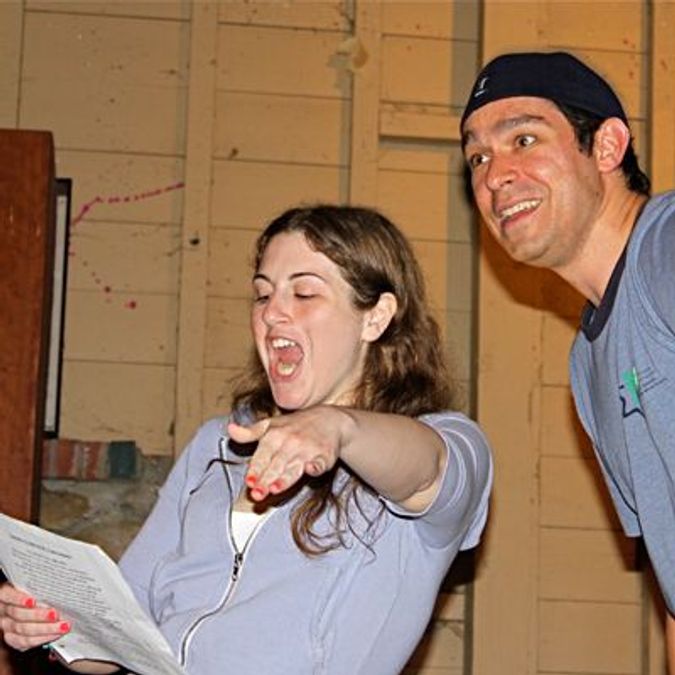 Bar and an audience participant perform a rap titled ?David and Goliath? at Camp Ramah Berkshires. Image by NAVIT ROBKIN

BRN workshops operate as follows: Bar and Salzberg come to schools and camps, armed with knowledge of Jewish texts and professional recording equipment. After they hand out lyric sheets to their listeners so that the kids can follow along closely, Bar and Salzberg sing a few of their songs.

Bar explained: “He’s the producer, I’m the emcee. I write the songs, and he makes the music.”

Then they have the school or camp group split up, with some kids going with Bar to write new lyrics based on a selected Torah theme, and others going with Salzberg to develop the beats. The groups later reunite and record their new song. Afterward, the Bible Rap guys distribute to the students an MP3 of their original work.

“Seventy percent of the No. 1 songs on Billboard last year had rap in them. It’s the culture of youth… so it makes sense that our ‘rebbe’ would be from that culture,” Bar told the Forward. “We try to make it not much different than Jewish education has been for thousands of years. It’s textually based, and it’s about respecting and incorporating the commentators of the past into a new understanding.”

Bar and Salzberg started BRN with a tour of Jewish summer camps, backed by the Foundation for Jewish Camp. Since then, they’ve performed for some 25,000 students and educators at about 40 Jewish camps, 50 day schools and 20 college Hillels, for, Bar says, everyone from autistic Jewish kids at a camp in Ojai, Calif., to Camp Ramah in the Poconos.

Bar, who was raised “ultra-Reform,” as he puts it, and was attracted to hip-hop when he was as young as 8 or 9, was an aspiring musician and had been working as a Hebrew school teacher. He had dropped out of the graduate school for Jewish education at the Jewish Theological Seminary after one semester, because, he said, “it wasn’t a nourishing experience for me.”

To more effectively engage his young Hebrew school students in the texts they were supposed to be learning, he would rap for them.

“When I ran out of clean lyrics, I wrote a rap about the lesson plan, and then kids were running to come to my class, and the next week they had the whole rap memorized,” Bar said. “Anything I taught through the lyrics of the rap, they were able to recall, so I saw the pedagogical potential.”

He soon found himself more interested in preparing his Bible raps for his Sunday school students than in playing gigs in Manhattan and Brooklyn.

“Instead of being a rock star, my passions came together nicely in Jewish education,” he said.

In 2007 he went to Jerusalem to participate in a fellowship at the PresenTense Institute, an organization working to seed new entrepreneurial talent in the Jewish community. There he met Salzberg, another young PresenTense participant, who was interested in playing, producing and recording music.

Salzberg, who was studying musicology and philosophy at The Hebrew University after growing up in the fervently Orthodox city of Monsey, N.Y., and making aliyah as a teenager, was living in Nachlaot, the artsy Jerusalem neighborhood where the creative ferment is similar, in some ways, to Manhattan’s Greenwich Village during the folk music era in the 1960s and early ’70s.

In 2008, as a student at the Pardes Institute of Jewish Studies, an egalitarian yeshiva in Jerusalem, Bar developed his idea further.

Summers have been spent touring Jewish camps, and many months during the rest of the year, the pair tours Jewish communities throughout the United States and Israel.

In September, Bar will move to Atlanta to follow the newly married Salzberg, who moved to the Georgia city because his wife is starting graduate school there.

After taking a break from playing at summer camps around the United States, and while planning the next school year’s gigs, he and Salzberg will be focusing on building BRN, Bar says.

The venture recently received a challenge grant from ROI which was matched by funds from two Jewish foundations. They’ve recently added backing from the Lippman Kanfer Family Foundation.

BRN hired an education manager and will bring on someone part time to manage the duo’s websites, BibleRaps.com and BibleRapsNation.com. On the sites, they have a “Teacher’s Toolkit,” which contains raps, lesson plans and videos that are already in use in programs at Hebrew high schools, among others places.

The next goal, Bar said, is “to teach other young, hip Jews to run the workshop, which is pure gold as a pedagogical tool.”

“We have some buzz going,” Bar said. “We hope to take this excitement and energy and have a relationship with all these different kinds of communities and have them interact through Torah.”

The Days of Ten Plagues

Pharoah’s in the tide, we gonna ride, to our destiny,
In back of me, so sad to see, them bodies in the red sea
chariots get buried, b-b-buried in the red sea
Pharaoh sat and laughed when a staff became a snake,
too long we’ve been your slaves, just let us go and pray,
said “don’t make this mistake,” no pardon his heart was hardened,
so started what we regard as: the days of 10 plagues…
ONE: blood in the river gonna shiver, gonna freak out
lips take a sip now there’s blood in your mouth
TWO: frogs in your house on your beds on your plate
don’t matter what’s for dinner better like frog legs
THREE: knats buzz buzz watch the dust turn to bugs
itch itch hard to think with all the lice in your mugs
FOUR: beasts roam your streets when you step outside
there’s a tiger on your tail nowhere to hide
FIVE: death of your livestock, flesh dries up
b-b-bodies in your barn Pharoah when you gonna wise up?
[CHORUS]
SIX: boils on your flesh no less than torture
careful of the ash in the air it’ll scorch ya
SEVEN: hail rains down beats your brains down
like a message from the heavens better lay our chains down
EIGHT: locusts from the coast you can hear their wing click
eating crops eating trees til they’re used as toothpicks
NINE: darkness, dispatch, 3 days pitch
remember when this started and you thought it was just witchcraft
Death of the first born how did it come to this
TEN is what it took so we all would remember this

Torah Raps:Teaching the Bible Through Music