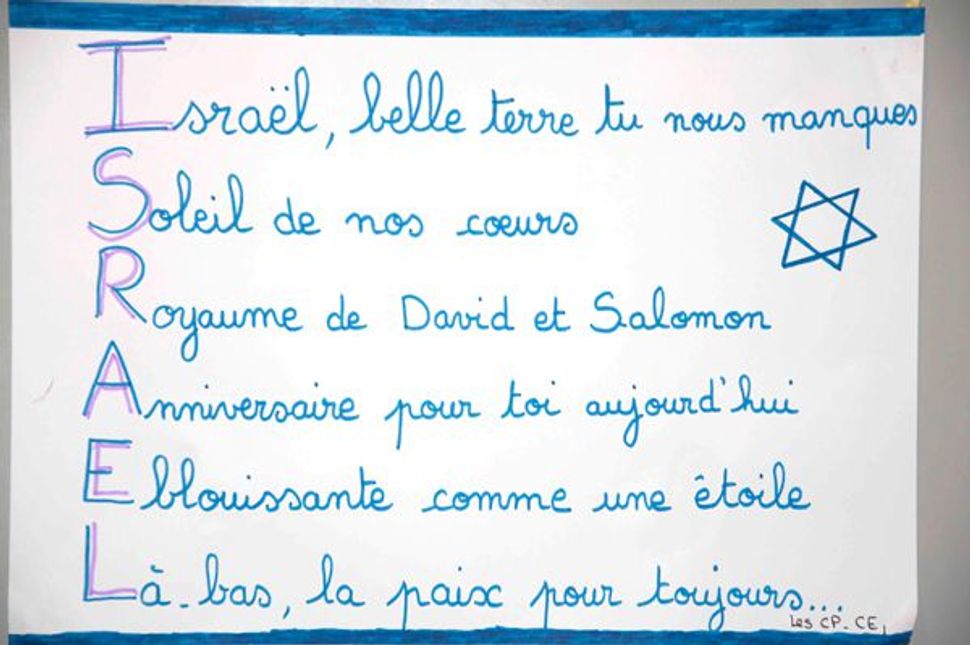 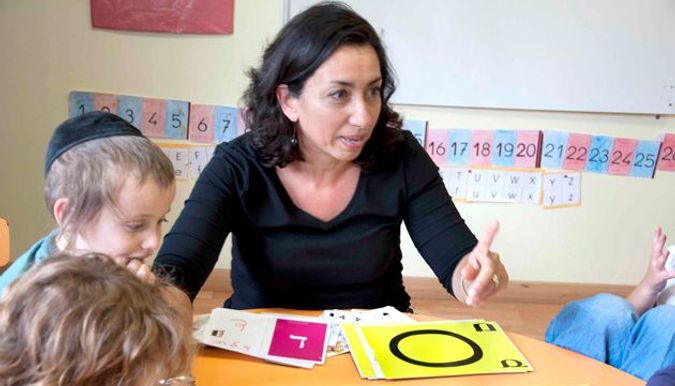 Study Hall: Simona Assouline teaches students the Hebrew alphabet. In the inset below, an acrostic poem students were asked to create as part of a lesson on Israel. Image by CLAUDIA z. CARLIN

Two flights above the only synagogue in Aix-en-Provence, the famed birthplace of Paul Cézanne, a bit of Jewish educational history is unfolding. Two years ago, l’Ecole Juive d’Aix en Provence, or EJAP, became the first trilingual elementary school in France to include classes in Hebrew and in English.

Prior to the school’s founding, Jewish children of the Aix (pronounced “ex”) area were bused to Marseille’s Jewish-run elementary schools, roughly 20 traffic-clogged miles away. For some, the travel was too much. Parents bent on giving their children a formal Jewish education beyond kindergarten contemplated leaving the city.

“When three of my close friends, couples with three kids each, announced they were ready to move, I knew it was time to act, but I was too busy,” said Alain Benhamou, 44, EJAP’s school board president. “Then I broke my right arm, and for two-and-a-half months had to interrupt my work as a dentist.”

Benhamou took advantage of the lull to persuade local parents to make a commitment. They would enroll their children in a school offering a unique program adapted to a changing world. “Adding English and Hebrew to French made the whole concept click,” Benhamou recalled.

A new learning center seemed like a natural fit. “Aixois,” as the people of Aix are known, like to boast that their town of 145,000 residents is a hotbed of culture and diversity. Attracting some 70,000 students every year, it is home to a number of international schools and American study-abroad centers, in addition to more than half a dozen museums and a world-renown summer music festival.

Moreover, the region around Aix has been traditionally hospitable to Jews. In the Middle Ages, one of France’s oldest communities thrived here under the protection of French-Catholic popes who fled Rome and settled in nearby Avignon. They became known as les juifs du pape (the pope’s Jews). One of their descendants, the composer Darius Milhaud, once described himself as “a Frenchman from Provence, of Jewish faith.” A cultural center (see story on page 16) next to EJAP bears his name. 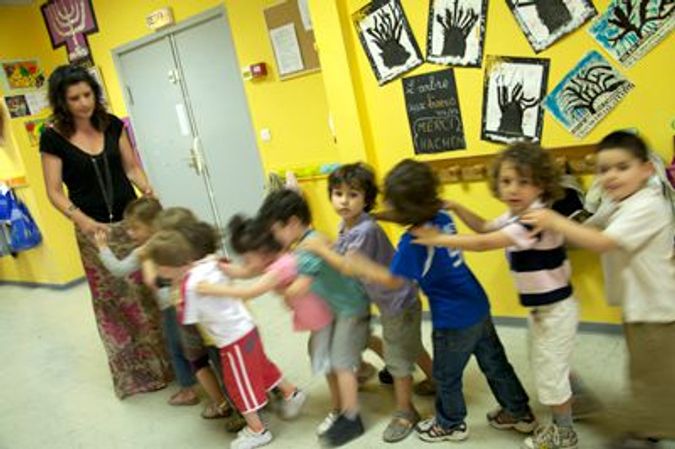 Creating an officially recognized French school required some heavy lifting. Benhamou first gathered a team of local fundraisers to raise seed money. Their success worked to convince national Jewish philanthropic institutions — the Shoah Foundation and the Alliance Israélite Universelle, among others — to ante up roughly the $400,000 needed to rebuild the premises and to hire a headmistress, teachers and a maintenance staff.

With funding in place, the search was on for a director who could design a curriculum that would ensure students a smooth transfer from elementary classes to the French secondary public school system. Such a program also had to work within a framework of Jewish cultural and religious values.

The search finally led to Lédicia Guigui, a former high official, or inspecteur d’académie, now retired from the French Education Ministry. Born in Algeria, Guigui moved to France in the 1960s, as did some 130,000 Jews from North Africa who were no longer welcome in the newly independent Muslim countries. This exodus led to a strong demand for new institutions. While Jewish schools barely had 400 students after World War II, there are now some 30,000 pupils in 275 such private teaching centers in France, the highest rate in Europe.

For the 25 families with children enrolled in EJAP, tuition runs about $320 monthly per child. Parents unable to pay can apply for scholarships.

At EJAP, from the weekly Hebrew-language class across the hall, children’s patter is interrupted by a loud “Yofi” — meaning, “Well done!” — drowning out Guigui, who juggles the ringing phones. Guigui’s energy is tempered by a collegial approach to the all-women teaching staff she selected personally.

“Earlier this year, I had to fire three English teachers because they were unable to engage the children in a creative way,” she said, as the new language-cum-music hire strummed her guitar and led the older children in a credible rendition of “God Save the Queen.”

Ten enseignantes, teachers, assist Guigui, who took the Jewish school concept to heart late in her education career. She defined her pedagogy this way: “By injecting fine arts and music into subjects too abstract for young minds to grasp, I sought to create ‘passerelles’ [connections] between various disciplines; this, I felt, would give children a strong foundation to grow up as open-minded French citizens, rooted in their Jewish identity.”

Art and music, intrinsic to life in Aix, make those connections real for the children. For example, pupils learn that the Israeli national anthem, “Hatikva,” was inspired by the music of Czech composer Bedrich Smetana’s lyric poem “The Moldau.” Later, to grasp the meaning of Shavuot, the children visit a local museum to study a harvest painting by Nicolas Poussin. Cézanne’s apples serve to illustrate one of the ingredients in the traditional Passover charoset.

The older kids, ages 6 to 11, enjoy outings in the Provencal city and the surrounding countryside, a relief from a rigorous classroom schedule that runs most days from 8:30 a.m. to 5 p.m. Lunch is served at the cultural center next door and is seasoned with more learning, as teachers encourage kids to practice their language skills. They point to each piece of food on their plates and say its name in Hebrew and English. Mistakes are corrected, then laughed away.

Starting next year, Guigui says she has obtained state funding for a portion of EJAP’s expenses, including all secular teachers’ salaries, thanks to a 1959 French law that allows private schools meeting specific criteria to petition for public funds.

Meanwhile, registrations for the upcoming school year keep growing. A new crop of little Aixois Israélites might then discover that English is also the language of “The Star-Spangled Banner.”