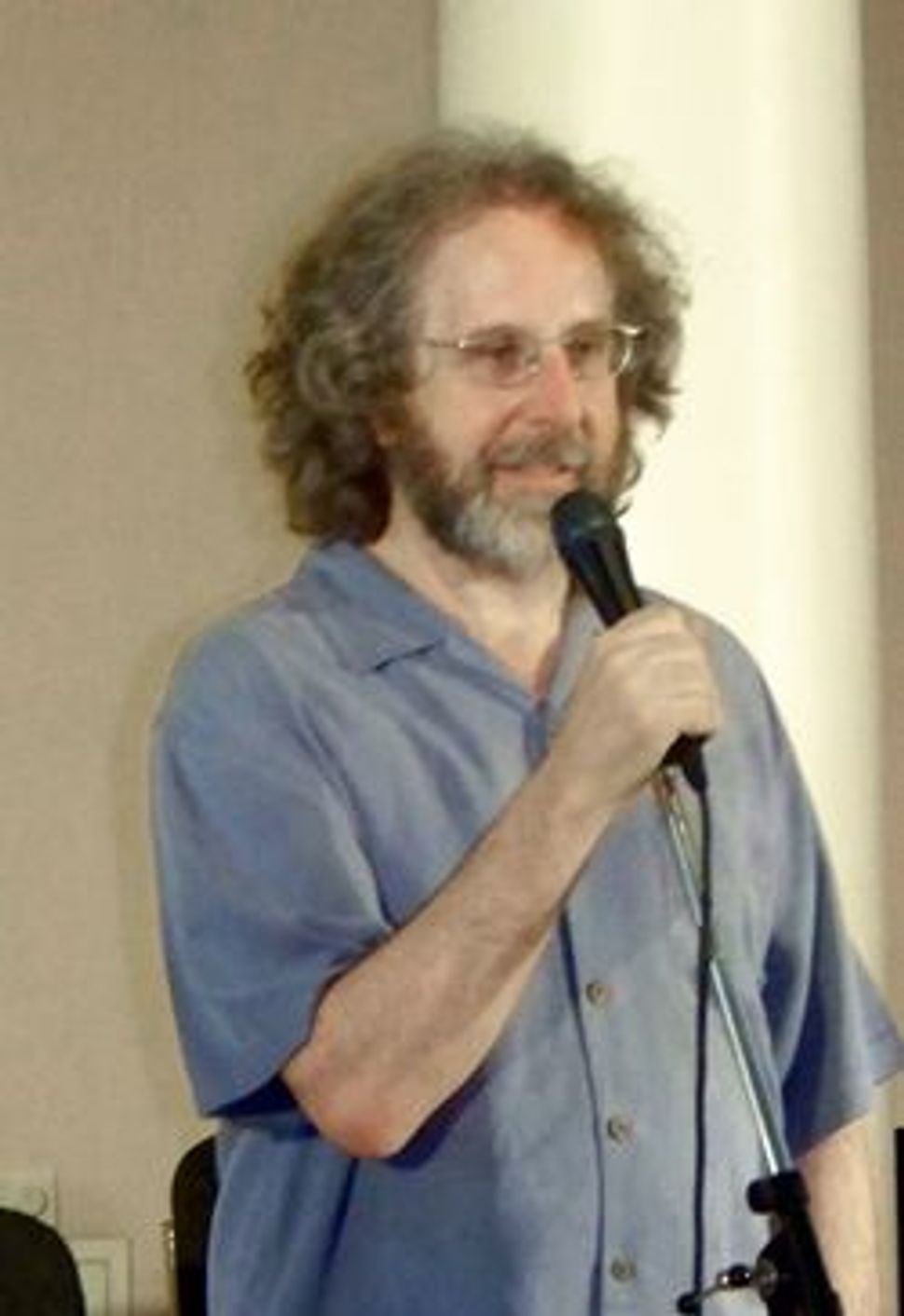 Pillar of German Klezmer: Alan Bern talks to the students this summer. Image by ITZIK GOTTESMAN

Free entry!: Get it here, German beer and ?Yidishkayt? ? but only from 8 o?clock. Image by ITZIK GOTTESMAN

Each summer, it seems, it gets harder to keep track of the Jewish culture and klezmer festivals around the world. This summer, we saw Klezfest London, the Jewish Culture Festival in Krakow, and then — starting at the end of August — New York’s Yidish-Vokh, KlezKanada in Quebec and Ashkenaz in Toronto. These are being followed, for those whose juices are just beginning to flow, by major events in Hamburg, Warsaw and Vienna.

And then, most intriguingly, there’s Yiddish Summer Weimar (YSW) with its haiku-like name, daring one to figure out the Zen behind it. Is it a play? A festival? A vacation destination? With the Buchenwald concentration camp located nearby, in the woods just outside the city, it would previously have been difficult to imagine Yiddish and Weimar in the same sentence. And yet… 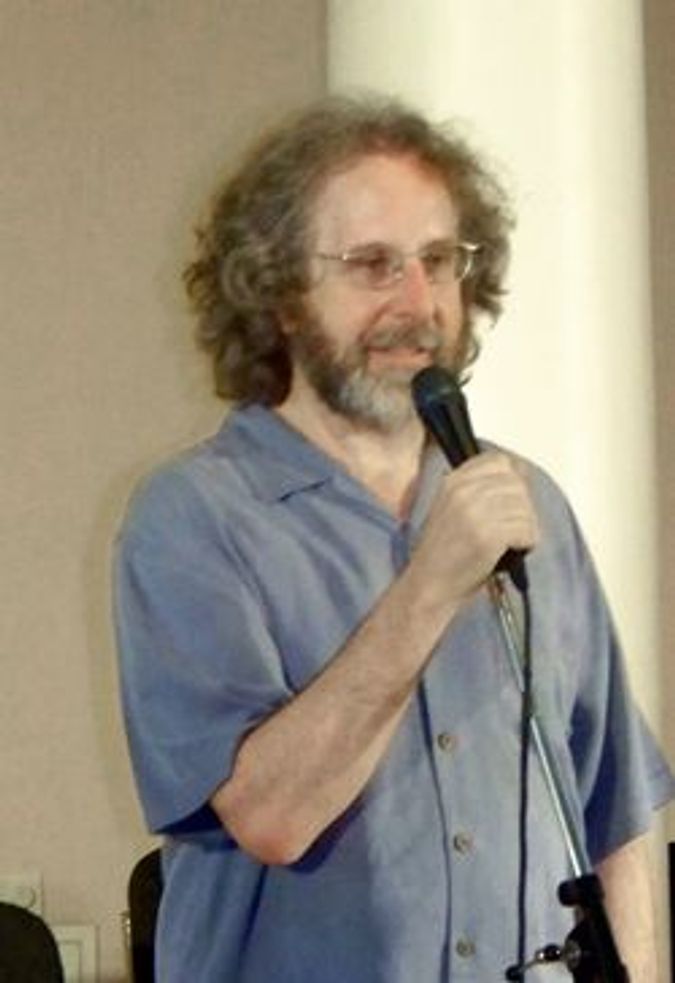 Pillar of German Klezmer: Alan Bern talks to the students this summer. Image by ITZIK GOTTESMAN

Ten years ago, the city of Weimar asked the international klezmer band Brave Old World to conduct a weekend workshop in klezmer music and Yiddish song and story. The following year, that weekend turned into a week, and now the program lasts six weeks in the summer, with two more weeks scheduled in the winter. The program’s reputation as the most intense learning experience among Yiddish cultural events is secure.

From the beginning, keyboard player Alan Bern, musical director of Brave Old World and the creator and artistic director of YSW, has aspired to a high standard for these classes, so that the workshop feels more like a conference of graduate students interacting constantly with their team of teachers. The program now has more levels for less advanced students, but it has maintained its intensity in all classes. The summer is broken down into weeklong themes, with students attending classes for eight hours each day. This year, the overall subject was “Yidishkayt!” exploring “Yiddish expressivity,” with “Yiddish” here denoting the whole Eastern European Jewish tradition.

To his credit, Bern dares to tread where others have not; to wit, in stark contrast to many klezmer classes that emphasize the fun side of the music with its frenzied dancing beats, this summer’s advanced instrumental workshop featured Yiddish music that is traditionally performed for listening, not dancing. Similarly, in the advanced Yiddish song workshop, the staff taught the tradition of unaccompanied Yiddish singing, an older style of singing Yiddish, particularly among women. These sad and tragic ballads tell of drowned bridegrooms, lovers shooting their beloveds and, in general, how depressing life was for the married Jewish woman. Since communal weeping is no longer in style, these ballads would be difficult to perform today from a stage. Part of the workshop evaluated the few recorded attempts to arrange these songs for a contemporary audience.

Ethel Raim, co-founder and artistic director of New York’s Center for Traditional Music and Dance, who was a pioneer in bringing Balkan vocal music to America in the 1960s, was one of the earliest proponents of this style in the folk music world. Together with klezmer singer Michael Alpert, she taught the unaccompanied singing style to a class of 30 Europeans at YSW. Alpert, singer and instrumentalist of Brave Old World and a world-renowned teacher, is a treasure of knowledge of the older ekht (genuine) ways of Yiddish music, dance and song. Between them, they covered the musical, ornamental aspects of the songs while I, participating as a lecturer on the older repertory of Yiddish ballads, discussed the life of the singers who sang them and how the songs were performed in the shtetl. And, to illustrate I played the students my field recordings of immigrant Yiddish singers.

People in the classes today are rarely Jewish. This summer the class, composed mainly of German women, but also of students from Holland, France, Austria, Russia, England, Latvia and Poland. Raim and Alpert taught just a few songs during the week, delving into each song line by line and word by word. Ideally, Bern would like these students to go out into the world and teach authentic Yiddish artistry to their own communities.

Bern seeks a deeper understanding of East European Jewish expressive culture based on the shared cultural traits of all European cultures. With this approach, one hopes, no culture, including the Jewish one, will be exoticized, romanticized nor stigmatized.

The mayor of Weimar, Stefan Wolf, is a big fan of YSW — and not just because he plays clarinet and often jams with the faculty and students. To house the program, the city permanently donated a beautiful old building near the center of town. Although it needs at least $1 million in renovations, the building provides a much-needed base. Most of the funding for YSW, though, comes from private sources and relatively little from the city and federal German government.

With dedicated students who return year after year, the leaders of YSW and its sister project — “Other Music,” which emphasizes European folk music from an intercultural perspective — hope to develop the workshop into an accredited academic program so that American students can study for credit. Yiddish Summer Weimar still has some way to go but getting dedicated students to register, it seems, will come easily.

Itzik Gottesman is the associate editor of the Forverts.