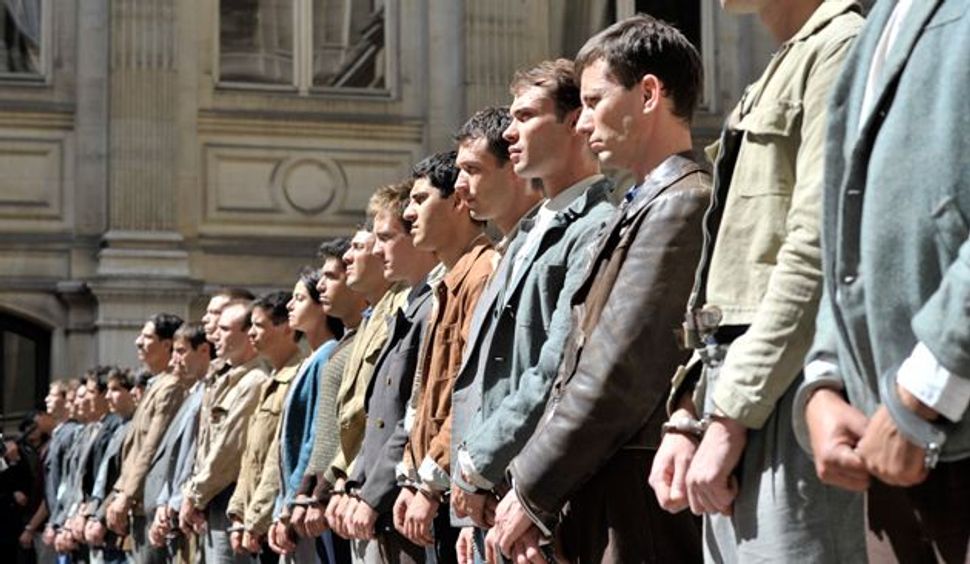 Those who Fought for France, are assembled as Criminals by the Nazi Occupiers: It?s not only poets who make lines in wartime. Image by COURTESY OF LORBER FILMS

The heroics of the French resistance have long intrigued movie buffs and filmmakers. Perhaps the most famous scene in cinema history is in “Casablanca,” when the tormented Ingrid Bergman bids adieu to Humphrey Bogart and chooses to escape with her resistance leader spouse.

Now, French director Robert Guédiguian’s mesmerizing “The Army of Crime” (“L’armée du Crime”) offers us a new crop of resistance heroes. Central to Guédiguian’s script is the gripping true story of Armenian poet and resistance leader Missak Manouchian. Between the wars, the Turkish-born poet, who lost his father in the 1915 Armenian genocide and his mother to starvation, became a leading Armenian literary figure in France.

Manouchian’s avatar in the film, the charismatic Armenian actor Simon Abkarian, shows great range while anguishing over the morality of his character’s underground activities, whether signing a noncommunist pledge to get released from prison or carrying out his first assassinations. Manouchian’s deeply passionate and comradely relationship with his wife, Armenian Mélinée Assadourian (Virginie Ledoyen), offers a positive celluloid vision of partners under the gun.

The film takes place in a Paris filled with political exiles who had fled there after losing to the fascists in Spain or fleeing Nazi domination in the East. Their security, and hope that France would prove a democratic haven, is shattered when the Nazis invade and establish the puppet Vichy government.

Unlike Holocaust feature films depicting the ghettos and grim urban destruction of Eastern Europe, “Army of Crime” presents lush visuals of Parisian life, with people eating in cafes and having picnics in the park. Beneath this facade lurk the fuming presences of Manouchian and other communist exiles plotting how to defy the hated Nazi presence.

As Manouchian’s revenge is chronicled in the film, the lead character recruits two less disciplined Jewish anti-Nazis. One is young Thomas Elek (Grégoire Leprince-Ringuet), who escaped from Hungary with his family. Thomas is a hotheaded student who indiscreetly shows his communist leanings by drawing hammer and sickle signs openly at school. A student offended by his artwork beats him up for being a “dirty Yid.”

Thomas’s mother, Madame Elek (Ariane Ascaride), runs a restaurant, while his father avoids reality by reading books all day. Madame Elek shows her sympathy to the cause once Thomas joins up with Manouchian. A strong and nonstereotyped Jewish mother, she bravely hosts communist gatherings. In one clever scene, the French police arrive suddenly at an Armenian independence party, only to find the guests pretending to celebrate an Armenian wedding.

The other central character is a vigorous Polish Jew, Marcel Rayman (Robinson Stévenin), who changes his last name to hide his religion. A young swimmer, he revels in killing Nazis without much regard for being caught. Marcel lives in a shtetl of Polish Jews who make their living sewing clothes. Privy to reports about concentration camps, Thomas warns his sulking mother that his arrested father will never return.

The director is eager to show the multiple ethnicities he has chosen to portray, and offers music cues to alert the audience. Jumping klezmer notes adorn Marcel’s habitat, while poignant Armenian melodies surround Manouchian’s space.

One criticism is that unlike the main male Armenian protagonist,who is played by an Armenian actor, Jewish protagonists are not played by Jewish actors, except for the redheaded Stern. Apparently, French cinema, like Hollywood, is not motivated to cast bona fide looking Jewish ponims.

The movie uses authentic underground posters and the actual fascist radio reports to illustrate how leaders of both the resistance and the Nazis wanted to dominate the news. The communists are motivated to perform acts of high-profile sabotage and assassinations to inspire their fellow French citizens, while the Nazis are pressured to conduct massive roundups to create fear in the population. The saboteurs called themselves liberators and freedom fighters, while the Nazis referred to them as the Army of Crime.

Armenians and Jews shared a tragic history in the 20th century. In 1939, Hitler bragged about how easily the Third Reich could destroy its enemies: “Who, after all, speaks today of the annihilation of the Armenians?” But in 1933, Jewish writer Franz Werfel had penned the popular novel “Forty Days of Musa Dagh,” depicting Armenian resistance against the Turks. And the Jewish youth read it religiously for inspiration while they formed their resistance in the Vilna ghetto.

And, like the French resistance under Manouchian, the Jewish underground in Vilna was led by a poet, Abba Kovner. As he was waiting to be executed, Manouchian wrote to his love, “I joined the Army of Liberation as a volunteer, and I die within inches of victory and the final goal.” Kovner might have replied, “True, we are weak and helpless, but the only answer to the hater is resistance!”

Aviva Kempner, produced and co-wrote the 1986 documentary “Partisans of Vilna.” She wrote and directed “Yoo-Hoo, Mrs. Goldberg,” which comes out on DVD on August 24.

Watch a trailer for “The Army of Crime”: