Listening In to the Field of Jewish Pop, High and Low 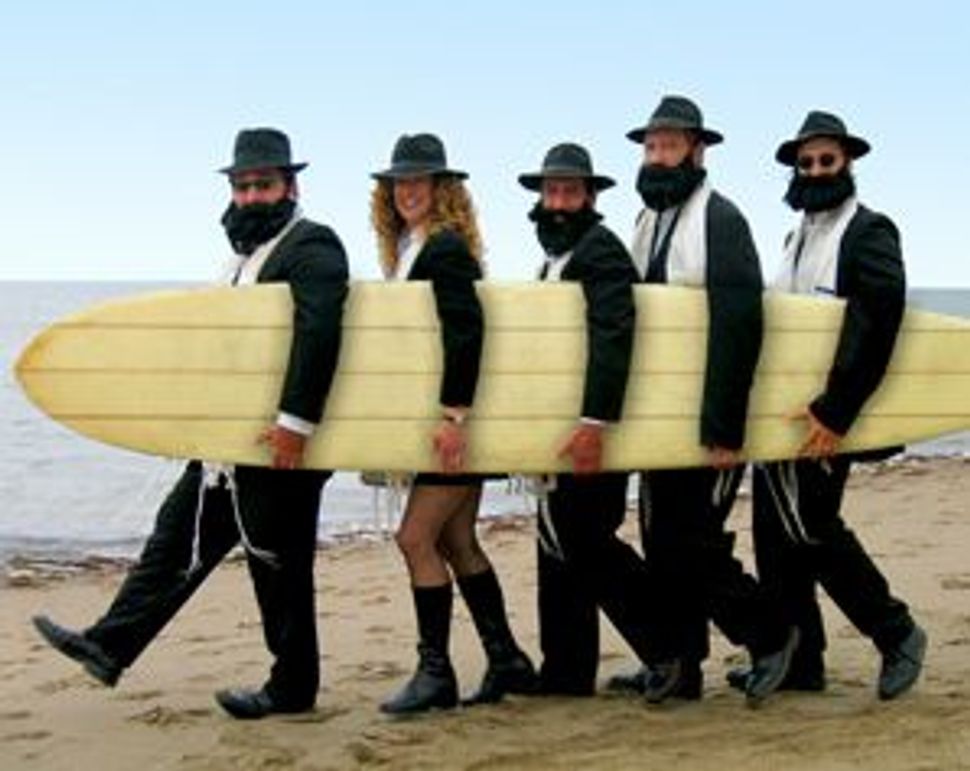 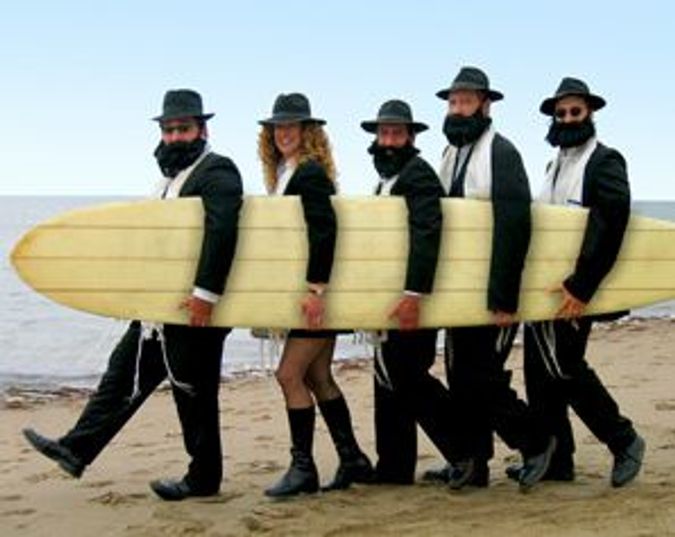 At least that’s what I found myself doing one recent afternoon, as I alternated between “Let’s Go Shleppin’!” a new CD by Meshugga Beach Party, out of Southern California, and a sampler of tracks from three albums by New York City’s Blue Fringe.

You don’t really need to listen to either one to know who’s in and who’s out; the cover art alone will tell you that. The Blue Fringe disc comes in a glossy, black-and-blue sleeve plastered with marketing blurbs and photos of the band’s four stubble-faced members — all Yeshiva University graduates — hands jammed into the pockets of their baggy jeans, shirts carefully untucked.

“Let’s Go Shleppin’!” meanwhile, is a visual mess. The band photo — four guys and a gal in prayer shawls and full Hasidic uniform (fake beards included), carrying a surfboard — is guaranteed to amuse some and offend others. And the “Shleppin’” liner notes are jammed full of corny Jewish jokes and precious comedy bits, such as a “rescue me” note in pig Latin from the group’s gentile bassist, Steve Henderson, aka Treyf Bacon III. (“Elphay! I’vay eenbay abayucteday ybay an anga of azycray ewsjay…!”)

But it goes a lot deeper than the packaging. Blue Fringe trades in very smooth, very attractive and very hook-oriented contemporary pop; were it not for the Jewish themes and religious imagery that pervade the group’s English and Hebrew lyrics, you could imagine the band popping up on the soundtrack to a teen drama on the CW, or making the rounds of the ringtone-download scene. The group’s public relations materials make frequent allusion to “influences” that run the gamut from blues-pop star John Mayer to the alt-pop stars of Coldplay, along with more righteous sounding (read: black) roots in rhythm and blues, reggae and funk — precisely the kind of promotional mantra that’s meant to communicate both cutting-edge hipness and rock-solid musical integrity.

None of this is particularly original, but the band’s polished brand of Jew-eyed soul does go down easy. Listening to the group’s version of the traditional synagogue tune “Eshet Chayil,” off its last release, “The Whole World Lit Up,” or the finger-popping original “Generations,” off the previous “70 Faces,” I found myself buoyed along in a kind of mindlessly contented trance. I also found myself wondering if I, too, could be so effortlessly cool.

As a consolation prize, however, I was also reminded that that’s okay.

Where Blue Fringe is irremediably hip, Meshugga Beach Party is irredeemably kitschy. In both cases, it’s the sense of absolute commitment that makes the music compelling. Meshugga Beach Party does one thing, and one thing only: surf rock, the kind pioneered by guitarist Dick Dale, with its signature reverb, twangy guitar and smash-and-grab drumbeat. But while Dale confined himself to a single cover of “Hava Nagila” back in 1963, Meshugga Beach Party seems to have decided that anything even remotely Jewish could benefit from a little beach party makeover, from “Theme From Exodus” to “Dark Eyes.” Everything the group touches turns instantly, and perhaps unintentionally, to parody; but that consistency of vision makes the album surprisingly enjoyable.

I have no doubt that Blue Fringe is more marketable, and holds broader appeal, than Meshugga Beach Party. Indeed, it is hard to imagine just what the market for Jewish surf rock would be. But I find myself pulling for these goofballs in ways that I cannot readily explain. Maybe it’s because they are so hopelessly devoted to something so hopelessly un-hip. Maybe it’s because I recognize in them my own inner geek — the one that drove me to collect superhero comic books in my youth, to found my high-school chess club and to arrive, dateless and defiant, at my high-school prom. Whatever the reason, I wish them nothing but the best of luck.

Listening In to the Field of Jewish Pop, High and Low