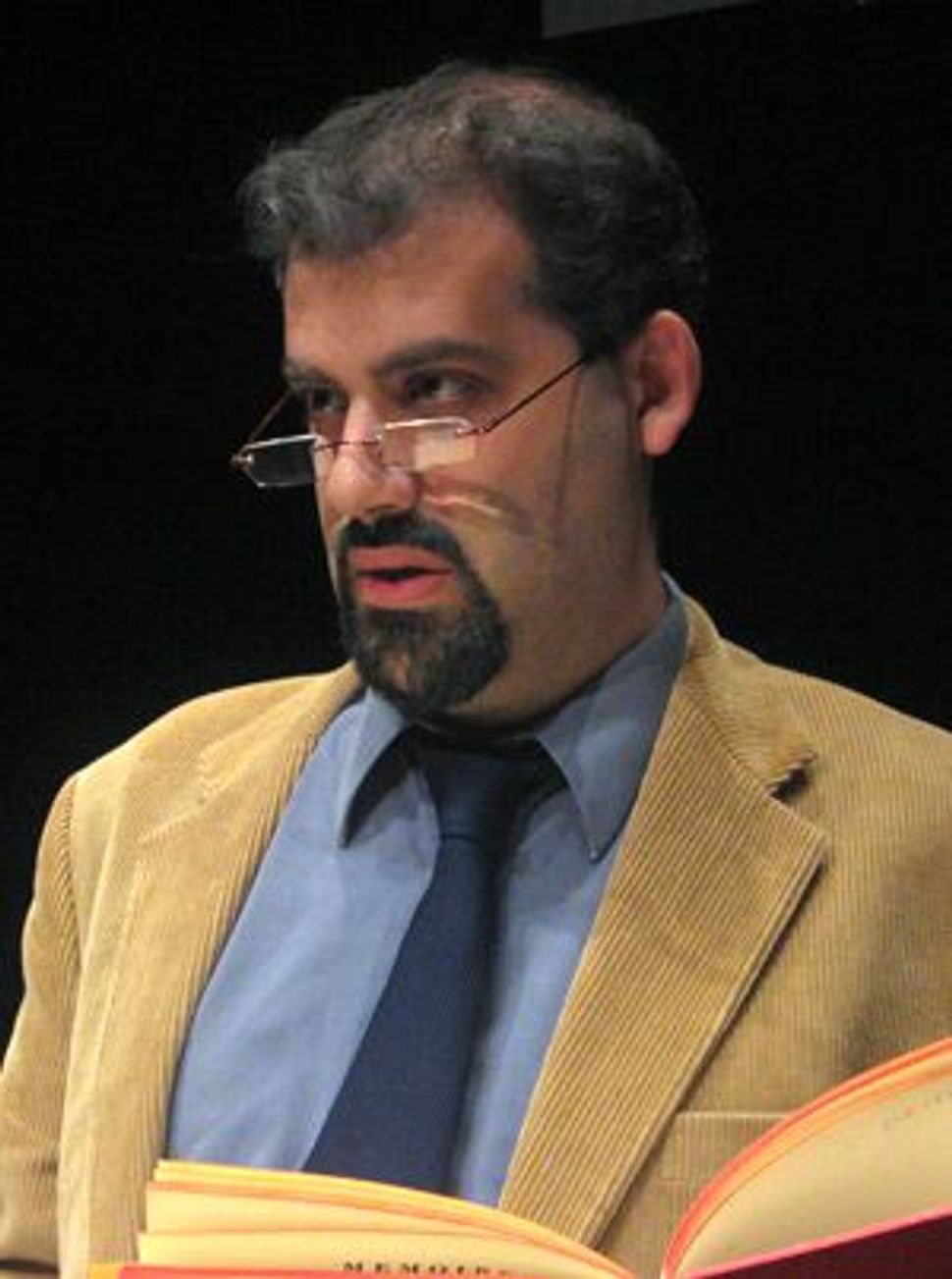 Taking His Medicine: Seth Duerr as Leslie in ?The Punishing Blow.? Image by KARLY FISCHER

The conceit of Randy Cohen’s new play, “The Punishing Blow,” requires a bit of setup. At some point in the past, second-rate college professor Leslie (Seth Duerr) was arrested for what amounts to an overblown case of public drunkenness — specifically, ramming his car into a ginkgo tree and then waking the neighborhood with his drunken ranting. In the course of his melee with the cops, he let loose an extended anti-Semitic tirade that lead to them charging him not only for the drunkenness, but also for hate speech. He was fined and given community service: a lecture at the Orange County Public Library on any one of the “100 Most Influential Jews of All Time.” 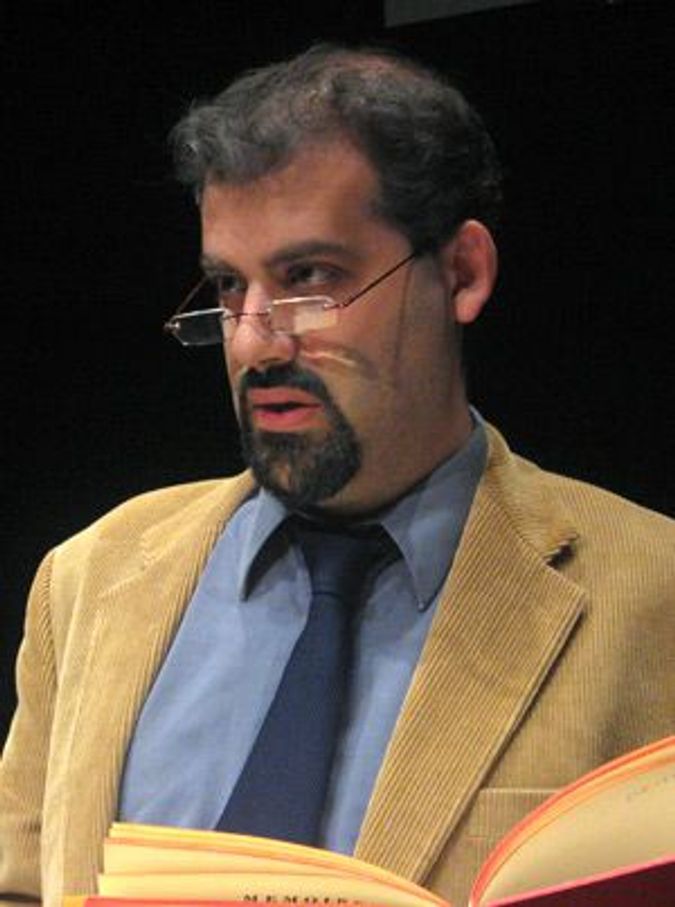 Taking His Medicine: Seth Duerr as Leslie in ?The Punishing Blow.? Image by KARLY FISCHER

The play itself consists of this lecture, and if, having read about the play before arriving, you know all this, you might reasonably expect to see certain tensions work themselves out: the interplay between Leslie’s resentment (of Jews, of the court, of the whole situation) and his ability to successfully complete the lecture. If you come to the play cold, though, it will take you most of the evening to catch up: The back-story isn’t fully revealed until the final 15 minutes.

Before the lights even begin to fade, Leslie shambles up to the podium onstage and begins to address the audience, thanking the library and apologizing to those assembled before him who might be there for the “Scrapbooking” discussion group, which his lecture has bumped from the schedule. Then, like any veteran of the university lecture hall, he launches right into the subject of the day: Daniel Mendoza, 18th-century British citizen, Sephardic Jew, hard-drinking street fighter and boxer extraordinaire, number 82 on the all-time list.

Mendoza is a fascinating figure, and Cohen is obviously fascinated by him. For the next hour or so, the audience is regaled with a thoroughly researched, insightfully presented narrative of Mendoza’s life and times.

As pure lecture, this is compelling stuff, and if not for the periodic self-referential asides — teases, really — about Leslie’s having to do this to avoid jail time, and about his horrendous relationship with “the beloved spouse,” and the indignities, real or perceived, he has suffered at the hands of his department head, you’d think the lecture itself was the purpose of the evening.

But no. This is a play, and the dramatic action has nothing really to do with Mendoza. It’s about Leslie, what led him to the circumstances of this lecture, and how the act of giving the lecture does or does not affect his material and physical relationships with the world.

Seth Duerr, who not only plays Leslie, but also directs the play, portrays Leslie as a pompous ass, a charismatic, egotistical academic so used to terrifying and boring his pupils that he no longer feels the need to hide his contempt for them. Stacks of musty books are piled on the folding table behind him. A whiteboard is propped within easy reach. A slide projector, manned by someone named Jean, sometimes does and sometimes doesn’t project the slides he wants. He barks and sneers. He throws chalk, lobs books dismissively onto tables. His body language suggests someone so filled with bile that it might come gushing out at any moment. It’s a performance injected with that particular machismo so often found in guys who know there’s no way they’ll win the fistfight.

In terms of pure bravado, this is fun to watch, but within the constraints of the lecture format, Duerr doesn’t have much room to build and change. Mendoza aside, the first three quarters of “The Punishing Blow” are all set up for the moment when the house lights come back up and Leslie proclaims, “I say without pleasure that delivering this lecture has not altered my feelings about Jews.”

He goes on to pompously justify his rage, explaining the details of plot and context we’ve been missing along the way. Not coincidentally, Jean, the offstage slide operator, takes on a much larger role in the show at this point, and so Leslie has a foil for his anger. Only then does the play begin to evince the real-time tug and pull on the character, making for real theatrical change. Leslie’s anger at Jews becomes less theoretical, and his reasons, if not exactly surprising, at least more personal and specific. By the time the play arrives at its dénouement, the audience already knows what will be revealed.

This isn’t to say that the play is pedantic or tedious. To solve its ending, it may rely too heavily on a self-evident final revelation, but it charms along the way. The writing is filled with smart, funny, sometimes profound observations. Cohen’s dramatic scaffolding might be a bit creaky, but, as befits a veteran humorist such as himself, his comic timing is impeccable.

*“The Punishing Blow” runs until August 28 at the Harold Clurman Theatre in New York City. *

Joshua Furst is the author of the novel “The Sabotage Café” (Knopf, 2007) and the collection of stories “Short People” (Vintage, 2004).