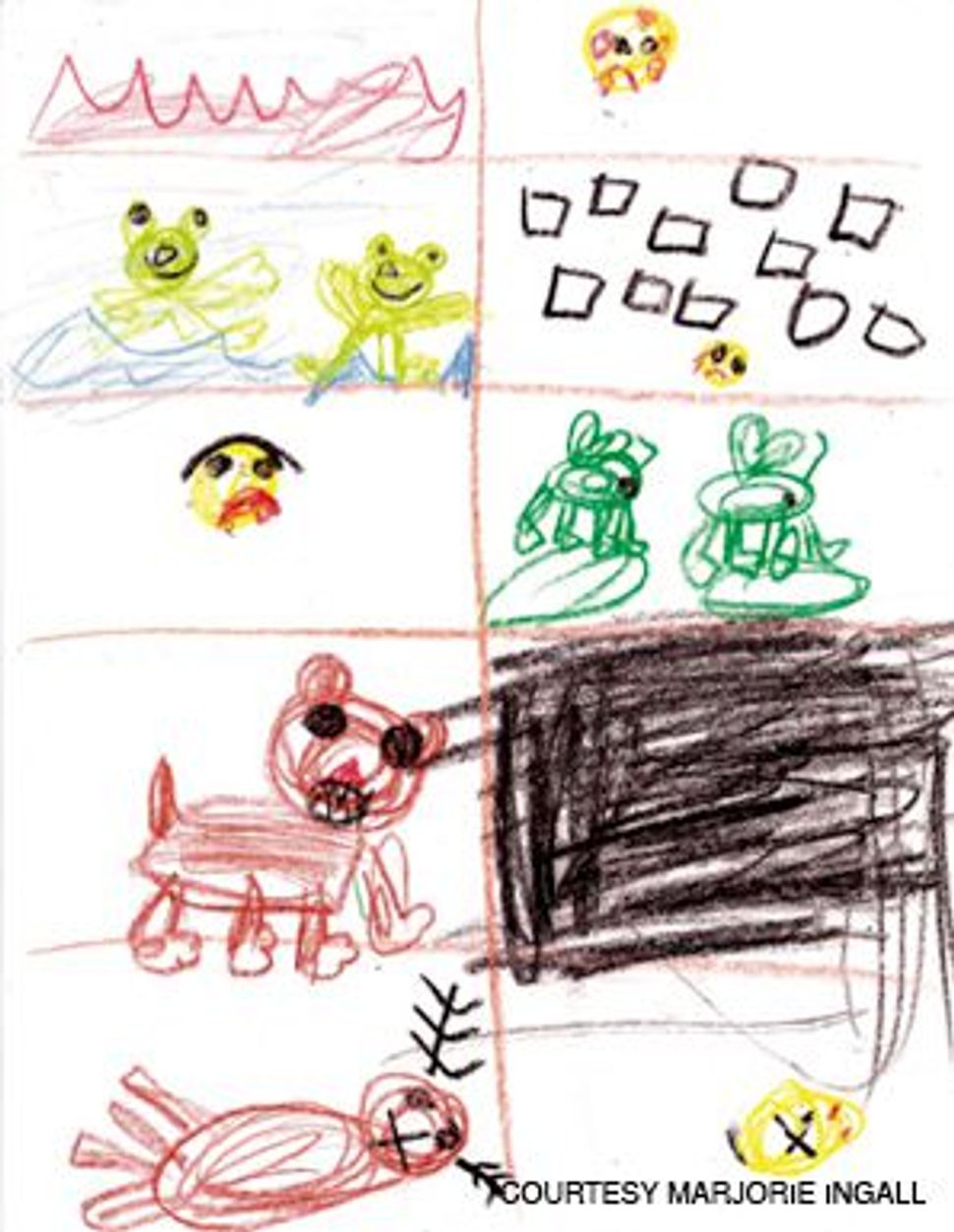 Purim is funny. Passover, not so much. 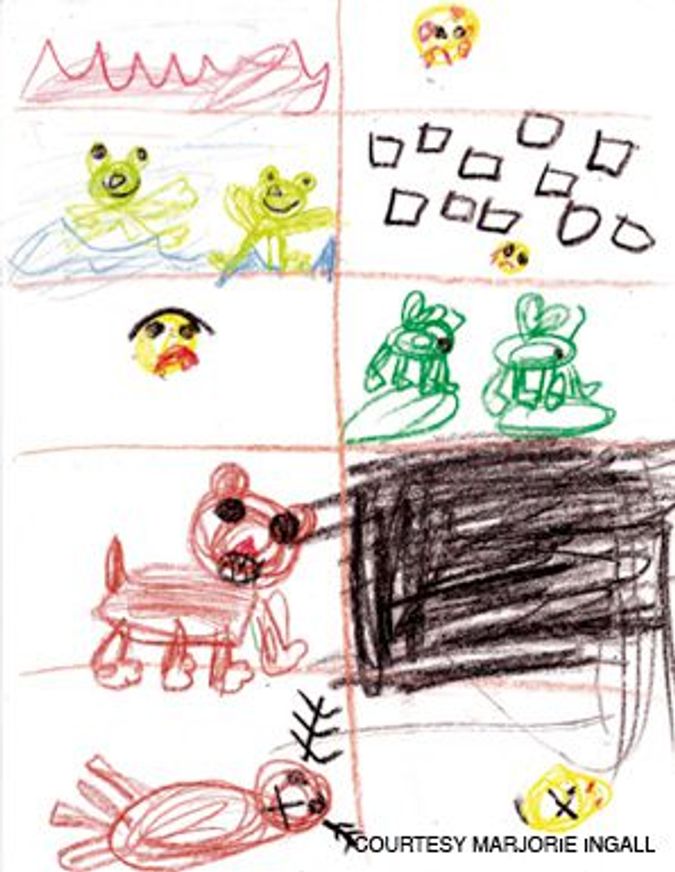 My kids always have a hard time transitioning out of Purim, with its nutso kid-friendly awesomeness. Grandma Betsy’s chocolate hamentashen will always trump leaden macaroons and The Jellied Fruit Slices of Doom. And this year, Josie was old enough to groove along to our shul’s Purim shpiel, “The Megillah According to the Beatles” (written by Norman Roth, a local accountant who churns out shpiels in genres ranging from Broadway to Nashville to “Saturday Night Fever” — he’s like a one-man “Backyardigans” episode!). Josie loved the gender-bending casting, watching older kids perform, and rocking out to Roth’s lyric-swapped versions of “Esther Day” and “I Wanna Kill Your Clan.” Maxie loved dressing up in a bunny costume from the dress-up box (purchased four years ago at a post-Halloween bargain-basement sale at the kiddie thrift, because I am a penny-pinching Jewy-Jew balabusta). Unfortunately, as Maxie hopped along First Avenue, I realized I’d forgotten that Purim isn’t the only spring holiday in town. People kept cooing at her, “Hello, Easter bunny!”

Our multi-culti life does create some challenges. Some non-Jewish friends of ours usually hold a neighborhood egg hunt, which means my kids associate Easter with racing around like treasure-hunting, chocolate-buzzed electrons. (I am reminded of an entry in a “redesign a children’s book” Photoshop contest on the Internet — one cover featured illustrated kids holding out brimming Easter baskets, surrounded by daffodils and tulips, with a little bunny in the foreground. The contest finalist had retitled it, “Thanks for Dying, Jesus! This Candy is Awesome!”)

Passover doesn’t offer the all-too-easily-secularized sugary fun of Easter or the transgressive, noisy, sanctioned anarchy of Purim. It doesn’t come with a girl-power story centered on a beauty contest and a brave heroine saving her people. (The Passover story does have some intriguing parallels to the Purim story, though — there’s a hidden identity in the royal palace, a covert op, a dramatic revelation of identity, a suspenseful wait for the ruler’s response, and the turning of the tide in which the oppressor and his associates get dramatically executed. Then again, that last bit is what almost every Jewish holiday is about. Followed by: “Let’s eat.”)

Passover’s a tough sell for the wee, frankly. It involves sitting at the table for a long time, a flood of words and teaching, some pretty terrifying set pieces (plagues! drowning!). So every year I work my tuchus off to make our seder funny. We draw cartoon-y Passover scenes on hard-boiled eggs; wear masks depicting the plagues; throw marshmallows to depict hail; whack each other with scallions during “Dayenu”; boogie in celebration of Miriam to Aretha’s “Sisters are Doing It For Themselves”; wrap the kids in a blue sheet to represent the Red Sea closing in on the Egyptians (after letting them run around under the sheet as we flap it over their heads to represent the Israelites crossing scot-free). Is this sacrilegious? Does it defeat the somber point of the holiday? Is it pandering to the post-post-MTV generation?

Possibly. But a lot of research indicates that humor is a kick-butt pedagogical tool (she said, defensively). It can help reduce students’ classroom anxiety, increase their ability to focus on the material, boost their participation, stimulate collaborative work, assist in information recall and increase long-term retention of lessons.

In a 2006 study published in the journal College Teaching, students watched two lectures on statistics and research methods. One featured amusing anecdotes; the other didn’t. Students had far better information recall after viewing the funny lecture, reported Sam Houston State University professor Randy Garner, in his excellently titled paper “Humor in Pedagogy: How Ha-Ha Can Lead to Aha!” Amen!

Another researcher, Edward J. O’Brien, a professor of psychology at Marywood University, designed an experiment in which some students watched an episode of “Seinfeld” and some didn’t, then all were asked to give an impromptu speech about a subject they knew little about (Bosnia). They were told they’d be videotaped. The heart rates of the students who’d watched the purportedly funny show rose from around 70 to around 83 beats a minute as they spoke; the heart rates of students who hadn’t watched the show rose to 100 beats a minute.

But Ron Berk, a professor emeritus of biostatistics at Johns Hopkins University, points out that not all humor is pedagogically effective. In his beyond-excellently-titled book “Professors are from Mars, Students are from Snickers: How to Write and Deliver Humor in the Classroom and in Presentations” (Stylus, 2003), Berk writes that to facilitate learning, humor has to be targeted to the subject matter and appropriate. Using distracting or offensive humor can actually interfere with learning, Berk’s and other social scientists’ research suggests.

Thus, that time a few years ago when my dad built “Crucifixion Barbie” — the plastic bimbo was attached to a cross, wearing a wee crown of thorns, with stigmata and blood painted on with red nail polish — and presented it (over my mom’s entreaties) as an Afikoman gift to a Catholic-born convert to Judaism at our Seder table… That was not an effective use of humor as a pedagogic tool. (The stunned silence was a clue, also.)

Crucified Barbies notwithstanding, humor in Jewish education has an illustrious history. In a 2004 paper called “Talmudic Humor and the Establishment of Legal Principles: Strange Questions, Impossible Scenarios, and Legalistic Brainteasers,” Hershey H. Friedman, a professor at Brooklyn College, posited that humor was used in Talmudic times for three reasons: to make learning more entertaining; to tickle the brain the way all brainteasers and puzzles do, and to get students thinking legalistically about the far reaches of possibility. The paper, published in Thalia: Studies in Literary Humor, describes some over-the-top scenarios presented by ancient scholars. What if you threw a knife at a wall and accidentally kosher-slaughtered a cow? What if unidentified meat rained down from heaven — could you eat it? What if a mouse came into a house on Passover with a piece of bread in its mouth, and then a weasel left the house with a piece of bread in its mouth? Could you be sure it was the same piece of bread? (And should you call an exterminator?) Such questions make you smile and make you think, and is that not the way of our people? Friedman points out that Rabbah, a Talmudic scholar who lived around the year 300, was said to make a humorous remark before each lesson; after the students laughed, he’d begin his lecture.

So no, I don’t usually worry about the irreverent tone of our Seder (or of this column, though I can think of a few Crucified Barbie-style jokes of my own I wish in retrospect I hadn’t made). Rabbah didn’t have to compete with Guitar Hero and Spongebob, yet he chose to target his audience by being funny about serious issues. Who are we to argue with that?