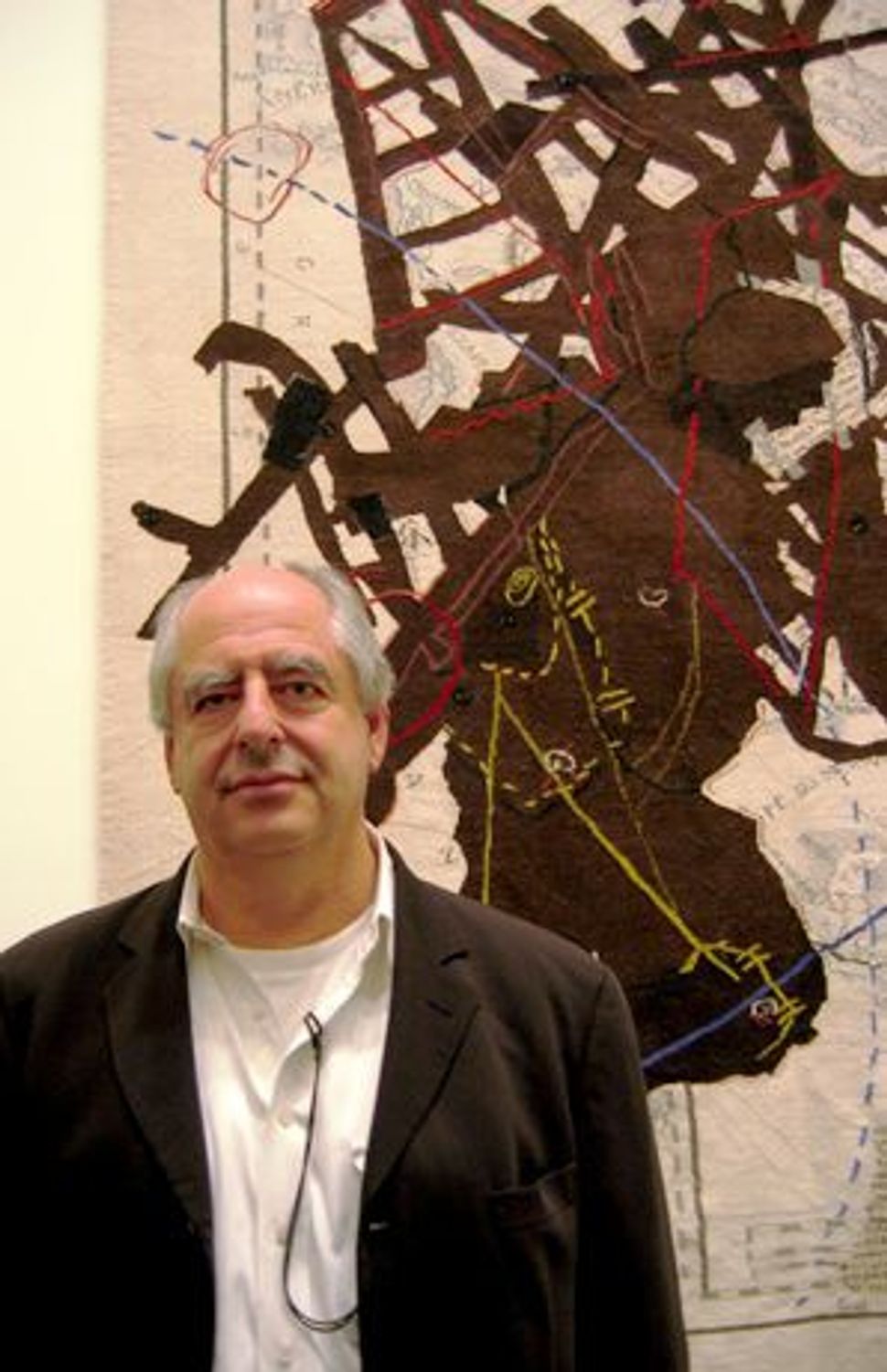 BLACK AND WHITE: South African painter William Kentridge posed before one of his works. 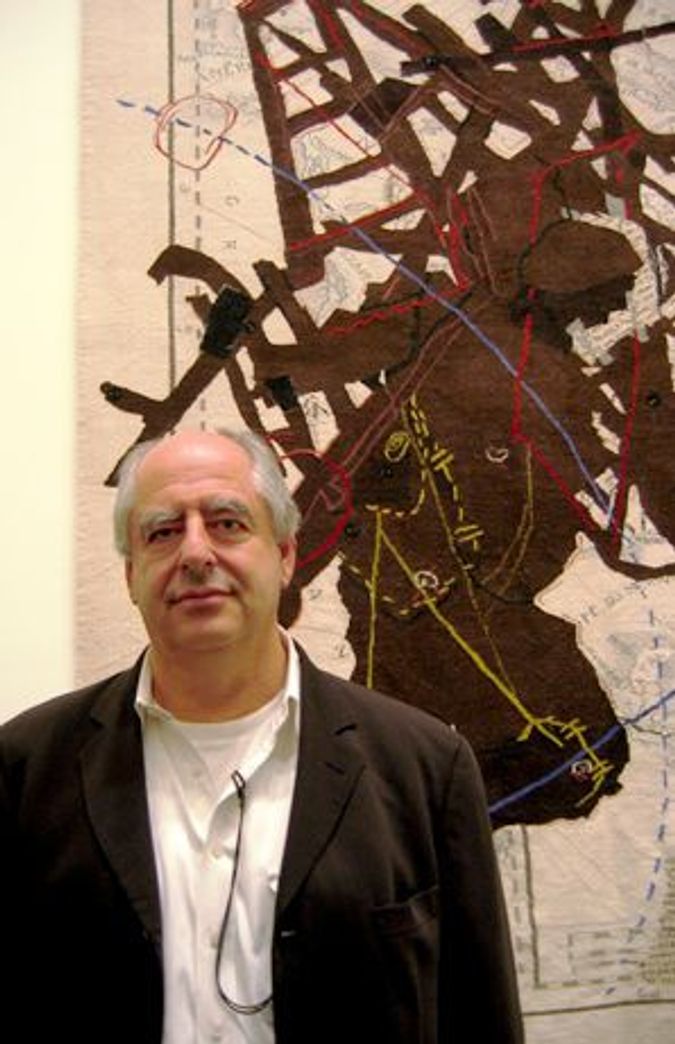 BLACK AND WHITE: South African painter William Kentridge posed before one of his works.

A dispersion of biblical proportions should carry special significance to Kentridge, a South African Jew born under apartheid. From the start, Kentridge’s work has focused on South Africa’s social and racial imbalances, and it has been shown in more than 30 solo exhibits at such venues as New York’s Metropolitan Museum of Art, Sydney, Australia’s Museum of Contemporary Art, Paris’s Centre Pompidou and Washington, D.C.’s Hirshhorn Museum. In 2001, Kentridge’s film “Shadow Procession” was projected in Times Square, and he directed and designed the set for a 2007 production of Mozart’s “The Magic Flute” at the Brooklyn Academy of Music. His drawings were recently on exhibit at the New York-based Marian Goodman Gallery.

The Noah tapestry is one of 11 on exhibit at the Philadelphia Museum of Art in Notations/William Kentridge: Tapestries, which also contains 23 other etchings, bronze sculptures, drawings and an artist’s book. To produce the tapestry series, which has never been shown before, Kentridge created collages from an 1848 French-made children’s atlas, superimposing torn black paper figures on the maps. He then turned over the collages to the Stephens Tapestry Studio, based first in Swaziland and then in the Johannesburg suburb Diepsloot, to convert the drawings into wall-sized woven tapestries.

In an interview at the Philadelphia Museum, Kentridge initially downplayed the Jewish significance of the Noah tapestry. At first he said that he was interested in the “chance associations” of map lettering interacting with outlined figures, and the combination of Noah’s descendants and dispersion was “a fortuitous coming together rather than a planned one.” Kentridge compared the Paris-based Musée d’art et d’histoire du Judaïsme’s interest in the Noah piece with the fascination of other viewers who discovered their hometowns in the maps.

But when pressed, Kentridge came up with more of a personal connection. “I think one of the things you know if you are Jewish is that generally, one generation back or two, there has been some migration, in my case and in the case of a lot of South African Jews from Lithuania,” he said. “So that is maybe a difference, an awareness of a recent or relatively recent 100-year-old arrival.”

Time becomes an important component of “Office Love” (2001), a map of Johannesburg labeled September 1890 with a man wearing boots and a suit and with a typewriter for a head. The man is walking toward an ink blotter perched atop an extra long-legged writing desk with a pair of scissors dangling to the side. In his essay in the catalog, Carlos Basualdo, curator of contemporary art at the Philadelphia Museum, explains that the map is “a pure invention” that anticipated the city’s development after the Witwatersrand Gold Rush, “nothing but a shadow that ended up projecting its own reality.” The creation “inevitably functions as a metaphor for the complex relationship between fact and fiction from which his work vigorously stems.”

However fictive the maps are, the depictions of porters capture a sobering reality that Kentridge came to know well after seeing displaced South Africans following the apartheid regime’s collapse. Johannesburg’s porters so affected Kentridge that he chose to memorialize one of them in his film “Monument” (1990). In the film, a single porter crouches on a pedestal, lifting a large bundle of packages tied together. Although a stand-in for the exhausted and dehumanized, the porter assumes a classical Greek pose, like Atlas shouldering the weight of the world.

Not all of Kentridge’s literary references are as typical as Atlas. He often cites Nikolai Gogol’s story “The Nose,” where a man awakens to discover that his nose has left his face and achieved such prominence in the bureaucracy that he cannot order it to return. Other works include “Ubu,” a creation of late-19th-century French playwright and anticipator of Absurdist Theater Alfred Jarry. The references to people transforming into objects derive from literary influences such as a Flannery O’Connor tale of a policeman turning into a bicycle, and Ovid’s “Metamorphoses,” where Arachne turns into a spider and a man turns into a tree, surely Kentridge’s referent in “Porter Series: Asie Mineure (Tree Man)” (2006).

Another Ovid story that Kentridge discussed at the exhibit opening is a perfect metaphor for his work. Tereus rapes his wife Procne’s sister Philomel and cuts out her tongue so that she cannot reveal his crime. Philomel weaves the story into a tapestry and sends it to Procne, who understands and takes such gruesome revenge on Tereus that the gods turn the whole lot into birds. Just as Philomel’s tapestry tells the tale she is incapable of recounting, Kentridge’s tapestries speak for the disenfranchised victims of apartheid.