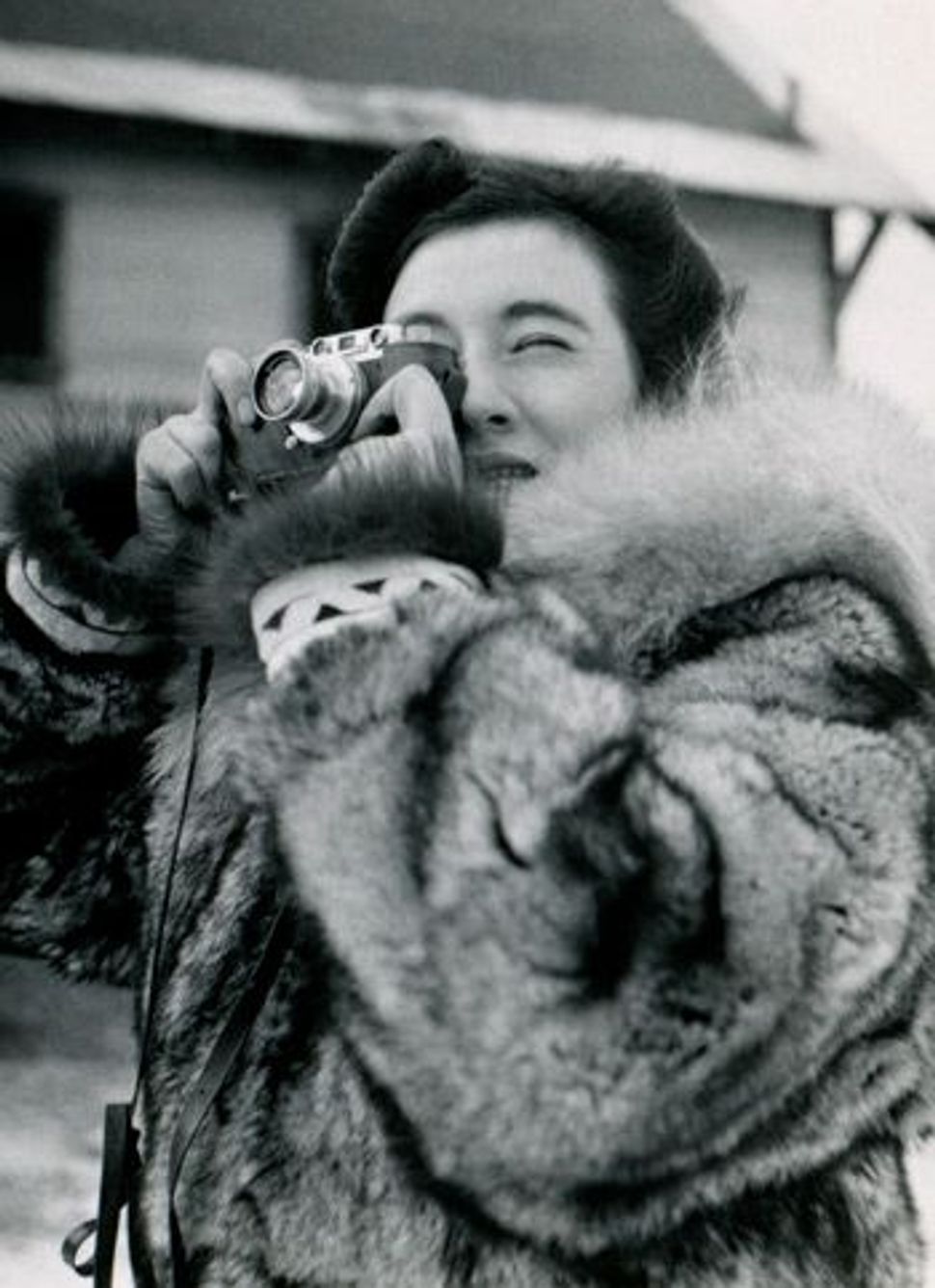 Witness: Ruth Gruber in Alaska 1941, documenting the moment with her Leica. Image by REEL INHERITANCE FILMS 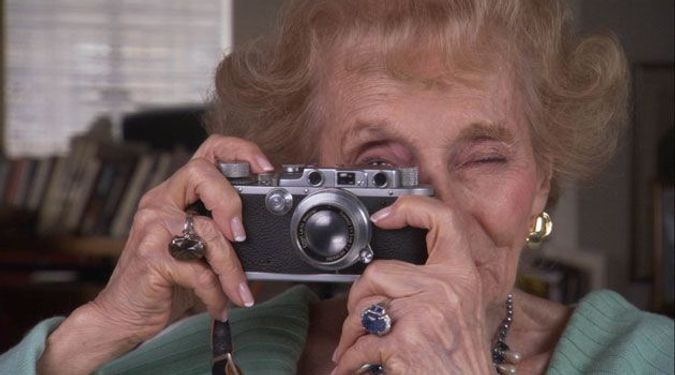 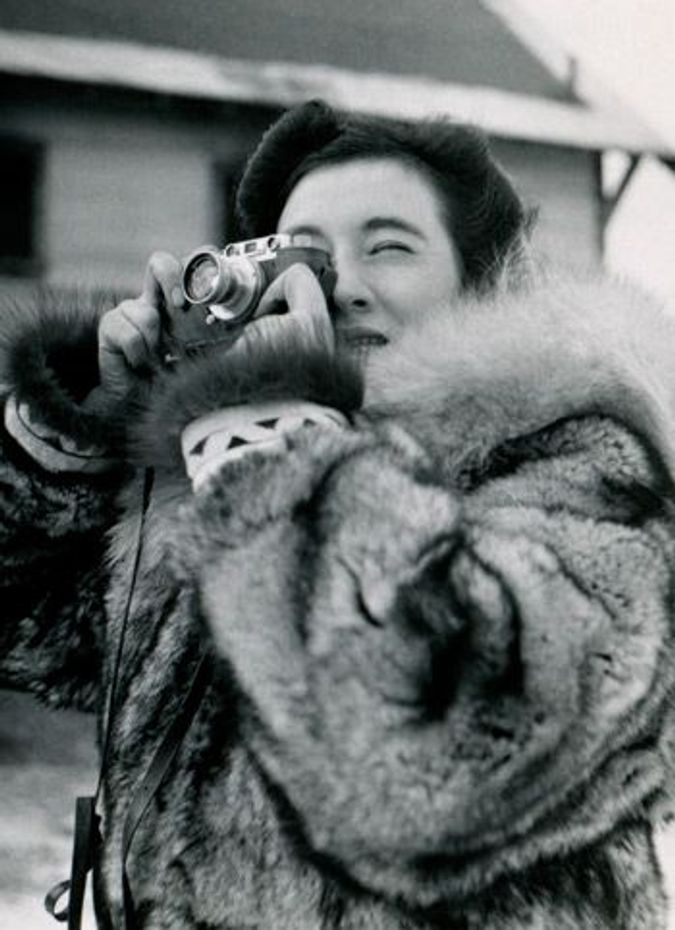 Witness: Ruth Gruber in Alaska 1941, documenting the moment with her Leica. Image by REEL INHERITANCE FILMS

Most famous for her startling 1947 photo of the Union Jack next to a swastika, Gruber changed the course of postwar Zionism. Jewish refugees from the Exodus had painted the hated symbol onto a British ensign flag as they were shuttled away from freedom around the ports of southern Europe. Her photograph, for the New York Post, from the Allied prison ship Runnymede Park, forced the British to honor their word and allow refugees into Cyprus. But this was just one step taken as part of a remarkable history. In 1932, Gruber had become the youngest Doctor of Philosophy in the world, completing the degree when she was only 20. While studying in Germany, this Brooklyn-born Jew posed as a German citizen and attended a Hitler rally so that she could see what the German leader was all about. She became a journalist for the Herald Tribune — one of the first women to enter the profession — and was the first reporter ever to enter the Soviet Arctic, an adventure she turned into a book, “I Went to the Soviet Arctic,” the first of 19.

In 1941, Franklin D. Roosevelt’s Secretary of the Interior, Harold Ickes, hired Gruber to be his special assistant and escort 1,000 Holocaust refugees into the United States. It was her first serious humanitarian task and she was given the rank of “simulated general.” According to her, Ickes explained: “If you’re shot down and the Nazis capture you as a civilian, they can kill you as a spy. But as a general, according to the Geneva Convention, they have to give you food and shelter and keep you alive.” It would be the only time Jews were allowed into the country during the war. The story was remarkable enough to be made into “Haven” — a 2001 made-for-TV movie starring Natasha Richardson as Gruber.

In addition to being the only American journalist allowed onto the Runnymede Park, Gruber covered the Nuremberg Trials and the United Nations vote on the establishment of the State of Israel. Amazingly, she did all this before she was 40.

“Ahead of Time,” which had its world premiere at the Toronto International Film Festival last year, is a deeply touching film, bolstered by the welcome presence of Gruber herself, who was 97 years old at the time of filming and is still of sound mind. Her modest observations about herself and her time belie the remarkable nature of what she saw, reported and interpreted for the world. Longtime cinematographer Richman (“An Inconvenient Truth,” “Killing Kasztner”), making his directorial debut with “Ahead of Time,” is clearly, and understandably, enthralled by his subject.

Gruber has a quiet, soft presence and her views meld well with the film’s frequently amazing archival footage, including that of the young Ruth, who was quite striking as a girl. She came of professional age at close quarters to historical events and famous people: corresponding with, and even meeting, Virginia Woolf about whom she’d written her doctoral thesis.

The incident of the Exodus 1947, in particular, stands out as an example of a human-interest story that gripped the entire world. It also showcases Gruber as one tough (albeit soft-spoken) broad — to use the parlance of that time — who stood up to the British official who tried to keep her from doing her job by denying her access to Saudi Arabia, where a conference on refugees was taking place.

Richman structures the film in short, pungent chapters, going from Gruber’s childhood in New York — with parents who had conventional expectations that she might marry and have children (which she eventually did) — to her educational and journalistic experiences in Europe and then her pivotal presence during the events preceding the creation of the State of Israel.

Interspersed with the footage and telling of her past, are thoughtful interviews with, among others, author Dava Sobel, Gruber’s niece; Israeli journalist Tom Segev; Louisa Herz Leopold, the German-Jewish girl whose family she stayed with in Germany; and Exodus 1947 captain Ike Aronowitz, who now lives in Haifa. While “Ahead of Time” identifies with Gruber as a subject worthy of admiration and acclaim, it never comes across as hagiography; she, for one, wouldn’t allow that. But it’s almost impossible for the movie not to feel like a love letter to her, as she’s so charming and likable and, most significantly, wise. She’s aware of her feminist status as a woman who broke through many barriers, but is at pains to explain that she didn’t necessarily see herself as a trailblazer, even though she knew that she was blazing a trail. Of course, real pioneers, like Gruber, just do what they have to do, without thinking about the obstacles. In an age of instant celebrities and constant self-promotion, it’s refreshing to see practical humility from someone who’s the real McCoy.

There’s a suggestion that Gruber, like her fellow Jewish journalist, the late I.F. Stone, has ruffled the feathers of some Israelis by not offering a consistently rosy view of the Jewish state, but “Ahead of Time” doesn’t really discuss that. Perhaps Richman thought that an Israel debate would distract critics from anything else in Gruber’s life. More likely that conversation would have had more to do with the second half of it. Other than a brief shot of Gruber’s first husband, whom she married when she was 40, and an anecdote about him, “Ahead of Time” is primarily concerned with the early part of her life, before she married and had children.

It’s not that Gruber stopped doing important work: She has consistently dedicated herself to helping beleaguered Jews around the world, such as those of the Ethiopian Jewish community. It’s not that she’s stopped writing: Her book “Witness: One of the Great Correspondents of the Twentieth Century Tells Her Story” came out in 2007. It’s just that her most significant accomplishments were in the early part of her storied existence. By stressing some highlights without trying to cover her near-century of achievement, “Ahead of Time” pares down a complex life to some of its most remarkable events. In the hands of a lesser filmmaker, that narrower focus might be a serious flaw, but Richman’s moving take helps us see this tiny woman accurately, as larger than life.

‘Ahead of Time’ is opening at New York’s Angelika Film Center September 10 and in Los Angeles at the Laemmle Theaters on September 24.

Shlomo Schwartzberg is a Toronto-based film critic, educator and programmer.