New World: Berl ?Lead Pencil? Botwinick at work for the Forward in the 1920s. Image by FORWARD ASSOCIATION

Each month when I sit down to write my column, the relevant facts — the who, what, when, where and why of it all — are generally arrayed before me. Not this time: Loose ends rather than tidy conclusions are destined to be the fate of this particular column. I recently came into possession of two small pieces of paper, each measuring no more than three by five inches, filled top to bottom with Yiddish words. Although the handwriting is handsome and supple and at times even a bit rococo, it was hard to make out its meaning. The distinction between the words and their background has become so blurred that the prospect of deciphering, let alone translating, them is an elusive one. I stared and stared and stared at the handwritten text, hoping that eventually my eye would grow accustomed to its nuances. I was rewarded, at long last, by the sighting of the word “America,” and by references to “Sorele,” and “Kalman,” and “photograph” and “bride.”

Intrigued, I approached my colleague, Brad Sabin Hill, curator of George Washington University’s celebrated I. Edward Kiev Judaica Collection, for help in further unlocking the orthographic mysteries of these cards. Little by little, thanks to Hill’s considerable powers of discernment, his deep knowledge of Yiddish, and his equally deep reserves of sitzfleisch (patience), things began to fall into place. Not entirely — there were still gaping holes — but enough to conjure up a brother (who, exactly?) in Eastern Europe (where, exactly?) writing (when, exactly?) to his sister, Sorele, and her husband, Kalman, in New York. After inquiring about their health and that of their children (A clue! A possible date!) and showering them with all sorts of brachot (blessings), he expresses an interest in coming to America. 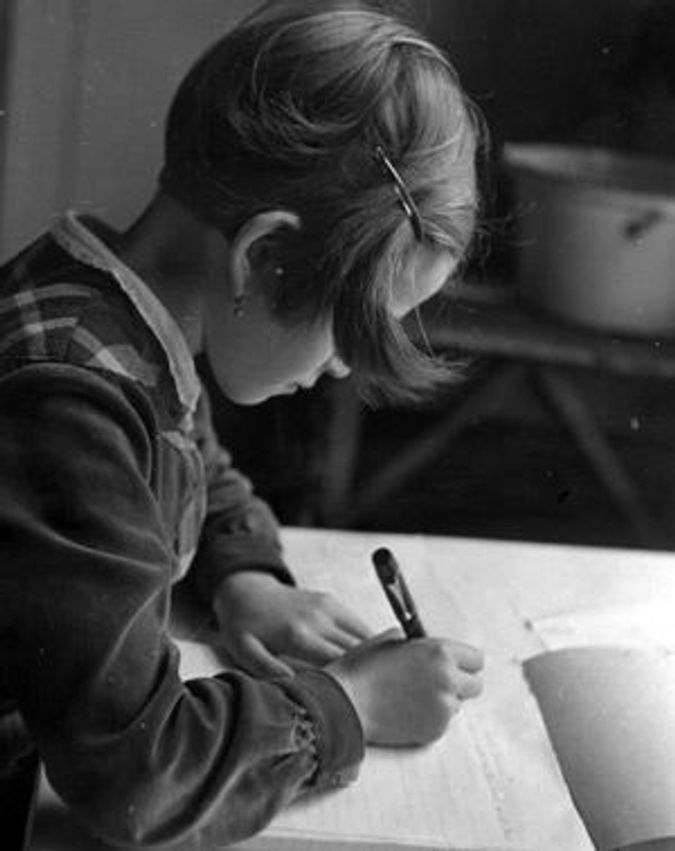 To the Old Country: In 1939, a refugee girl writes a letter to her parents in Germany, describing her new life in America. Image by FORWARD AssOcIATION

Just as it begins to get interesting, the sentences trail off. Perhaps there was another piece of paper that contained a concluding thought, a signature or a place name. But it’s gone missing. What I do have is a second bit of correspondence written in the same Yiddish hand, as well as in a cursive Cyrillic, that is also addressed to Sorele and Kalman. This one bears a signature — A. Gaukhstein — and a wry little sentence: “From great boredom flies my photograph into the hands of my sister and brother-in-law.” Nice. But who was A. Gaukhstein? When did he put pen to paper? And where, oh, where are the photographs?

For context and clarification, I turned to the source of this material: my mother’s first cousins, Eleanor and May, whose aunt and uncle were Sorele and Kalman, respectively. My relatives, who are in their 80s, recently forsook their Brooklyn apartment — which had, by then, much in common with the overstuffed lodgings of the famous Collyer brothers — for a nursing home in New Jersey, which is how these two pieces of paper from the Old World surfaced. Who was “A. Gaukhstein,” and where did he come from? I asked them. What happened to him and his bride? For that matter, what happened to the photographs he sent to the States?

I would like to report that the answers came fast and furious, and explained everything. Alas, they didn’t. They were fragmentary and vague, and frozen in the standard narrative that so many American Jews have of their Old World relations. This is what I learned: Sara, as she was called in the New World, had a brother whose name was Shimshon, but as the eldest child of five, he bore the nickname “Alte” — hence, the “A.” The family’s last name was variously held to be Gorstein, Gorenstein or Hochstein. They came from Pinsk. Then again, maybe it was Minsk. Alte and his bride never made it to America. They were lost during the war and never heard from again. End of story.

It’s easy to fault the members of one’s family for not paying greater, and more consistent, attention to the details of their own history in Eastern Europe. But then, I realized with a jolt, I wasn’t up to speed on the lives of my American relatives, either, and they lived in Brooklyn, not in Minsk or Pinsk. What, after all, did I really know about Eleanor and May? Not much.

For the most part, they lived outside the frame of my daily life. Eleanor and May — such sweet names, reminiscent of an earlier, kindlier era in American history — called each other “Sis,” drove a big, bulky, decidedly old-fashioned car, wore shapeless black dresses and were smitten by the movies and the theater. Well-informed, keenly intelligent, witty, even droll, they were a part of that vast, unheralded army of women who staffed the law firms and government offices of postwar America for years on end, their jobs never fully commensurate with their talents. What’s more, Eleanor and May never married, choosing instead to live out their long lives in each other’s company. And for this, they were known in the family as the “maydlakh” (the “maidens”). The term was meant to be descriptive, a sociological datum, but it seemed to me, even as a young child, to carry the faintest whiff — just a touch, really — of disapproval laced with sadness. Why hadn’t they ever married, I would ask my mother on occasion, but I never received a convincing reply and eventually stopped asking.

As it happened, I was unable to uncover much of anything about A. Gaukhstein or his anonymous bride, nor was I successful in accumulating additional details about my mother’s cousins. These omissions, these looming absences, haunt me: The weight of the past hangs heavy, especially this time of year, when the Jewish holidays roll around and families from the Old World and the new gather together to count their blessings.