Plain Sailing: Burson?s research has taken her from Memphis to Brooklyn via Germany, Boston, Nashville, Ukraine, Lithuania and Providence. Image by ERICA BECKMAN

Among her other achievements, Clare Burson may claim a place in history as the first composer of a song cycle inspired by a piece of cheese.

Granted, the wedge in question is 117 years old, laden with family history, and imbued with near-mystical significance by Burson. Still, even she seems surprised at the power it brought to “Silver and Ash” (Rounder Records), the crystalline, immaculate CD scheduled for release on September 14.

“My paternal grandmother has this wedge of cheese that she got from her father, who got it from his own mother, who gave it to him when he left his shtetl in Lithuania in 1893 to avoid conscription in the czar’s army,” Burson said in a telephone interview from her Brooklyn home, where the Tennessee native has lived since 2005. “He never ate it.” 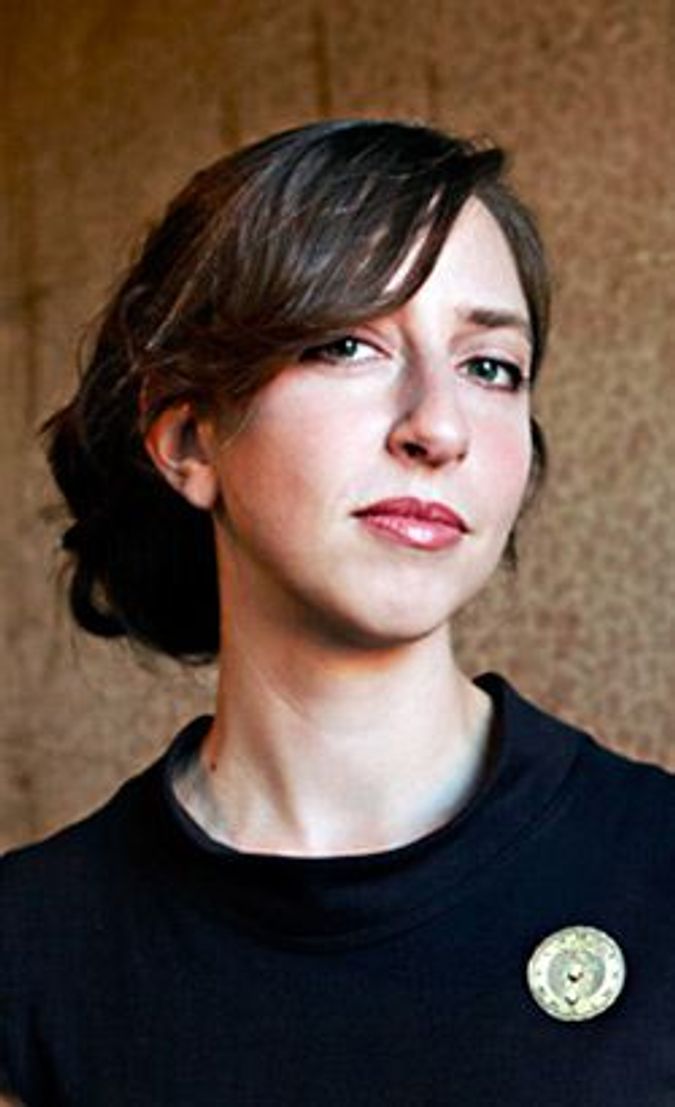 Burson’s great-grandfather eventually landed in Memphis, where he had four daughters, including Burson’s grandmother JoJo; Burson’s parents discovered the shriveled mound of cheese, wrapped in tattered cloth, while repairing her great-grandfather’s deteriorating trunk in the attic of their Memphis home.

“This cheese is an amazing artifact. It’s also clearly Jewish cheese that tells the story of my family and of the Diaspora,” she said. “I thought, wouldn’t it be amazing to make an album that stands alone as art, but, like the cheese, tells these stories? That was the idea that got ‘Silver and Ash’ started.” The song cycle ultimately became an exploration of Burson’s roots — an immigrant saga that aches for continuity by re-imagining the stories of her grandmothers, their parents and even their forebears.

The desiccated dairy remnant, and the songs it eventually inspired, were enough to impress the screening committee for the Six Points Fellowship, a three-year-old grants program for emerging Jewish artists. “Clare came in and shared the story of the cheese,” recalled Rebecca Guber, the program’s New York-based director. Burson became one of its first fellows in 2007. “We were immediately drawn into that physical metaphor of her family’s experience,” Guber said. “She’d been able to bring this particular story into a universal context, while keeping a particularity about it. So while it’s about the events her family went through, you can also read it as a larger meditation on love, loss and memory.”

The result is a moving, spare suite of 10 mostly minor-key pop/folk songs with vaguely Jewish musical themes and modern edges. Acoustic guitar dominates the clean, minimal production, with color from deft touches of pedal steel, mandolin and strings. While Burson has compared herself to Canadian chanteuse Leslie Feist, her own voice resonates with more depth and emotion than Feist.

The opening song, “The Only Way,” lays wistful lyrics over a deceptively simple arrangement. “Funny how the details never fade/Names of where we were and what we did there,” she sings, evoking both personal memories and shared history. In “Everything’s Gone” — “The radio’s loud/The radio’s clear/Everything’s gone/But we’re still here” — Burson paints an oblique portrait of a Holocaust survivor with lyrical brushstrokes that evoke the pain of loss and a longing for a link to the past.

A classically trained violinist, and later a genre-hopping fiddler, Burson taught herself guitar while studying history at Brown University. After college, she spent a year in Germany as a Fulbright scholar; back in the States, she settled briefly in Boston before moving back to Tennessee. In Nashville she fell into the local music scene, schmoozing with producers, musicians and writers there; renowned producer T-Bone Burnett oversaw her debut EP, “Undone.” But Burson moved again in 2005 — this time to Brooklyn. “I needed more than just music all the time, which was Nashville. I also wanted more of a Jewish community,” she said. “I love that it’s no big deal to be Jewish in New York. It’s not a defining feature.”

Brooklyn is also where Burson began work on “Silver and Ash” in earnest. “I was going to write ‘Silver and Ash’ as a Southern Jew in New York and look at a broader spectrum of Jewish identity,” she said. But after she used the Six Points grant to fund a trip to Eastern Europe for inspiration, Burson’s focus shifted. “Since I’d already lived in Germany, I thought I’d processed everything around my grandmothers’ stories,” she said. Once she journeyed through Ukraine and Lithuania, she added, “I got to Riga, where my maternal grandfather’s family came from, and the reaction was far more intense than I’d imagined. I was by myself. It was raining. I cried for an entire day.”

Burson also learned the fate of her maternal grandmother’s parents, whose whereabouts had been unknown after they had left Leipzig, Germany, for Riga in the late 1930s. Her grandparents had already immigrated to the United States. “My grandmother had received letters from her parents for two years when they moved from Leipzig,” she said. “The letters stopped in 1941. I had done research to find out what happened. My grandmother doesn’t know, but I do. And I wanted to go and say goodbye.” Burson still hasn’t revealed their fate to her grandmother, and she wouldn’t discuss it for publication. “But that moment helped me fill a lot of narrative holes,” she said.

Does Burson worry that “Silver and Ash” will get her pigeonholed as a Jewish artist? “Yes, I worry about it,” she said. “I want to be seen as an artist who happens to be Jewish, happens to be a woman, happens to be from the South, and happens to live in Brooklyn. Getting labeled as any sort of noun makes me bristle a little. But being Jewish has influenced my worldview, how I act. On a spiritual and emotional level, it certainly has influenced me.”

Meanwhile, Burson has already started work on her next album. “I’ve written a handful of new songs since completing ‘Silver and Ash’ — about half an album’s worth. The new songs are already populated by a different cast of characters, though it will be difficult to let go of the ones who come alive for me in ‘Silver and Ash,’” she said. Beyond music, Burson hopes to continue teaching; she gives private guitar and fiddle lessons, primarily to kids. “I got married last year, so starting a family is in the cards somewhere down the line as well,” she said.

And how about pop stardom a la Katy Perry and Lady Gaga? “I think ‘Silver and Ash’ is going to catapult me to become the next Katy Perry,” she said with a laugh. “Seriously, that’s not what I’m chasing. It would be awesome if it happened. But my guess is that my audiences are totally different. It doesn’t mean people can’t have fun with those artists. But for me, they just exist in very different worlds.”