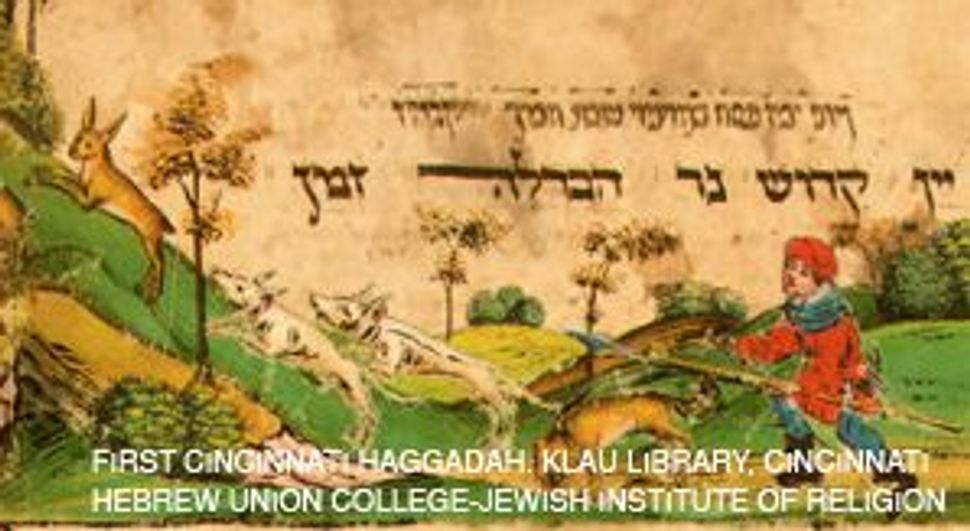 RABBIT, RUN: An image from a Haggadah written by the scribe Meir Jaffe in southern Germany, circa 1490.

The Passover Haggadah is jam-packed with symbols of redemption from the Egyptian enslavement. But scholars are divided over the significance of one particularly unusual symbol: rabbit hunts. 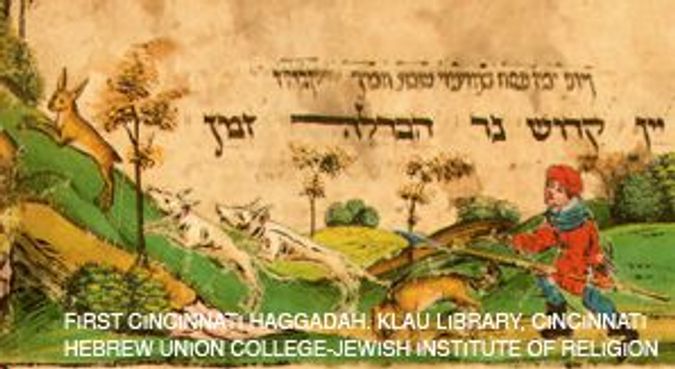 RABBIT, RUN: An image from a Haggadah written by the scribe Meir Jaffe in southern Germany, circa 1490.

These images appear mostly in Renaissance Haggadot. Even to laypeople, illustrations of hares — chased by dogs that are often accompanied by men on horseback — are curious additions to the Haggadah. Hunting is generally not considered a Jewish activity, and hares are neither kosher nor relevant to the Exodus story. Experts disagree on the relevance of rabbit symbolism in Haggadot, with some suggesting religious explanations and others pagan and Christian ones.

A page from the scribe Meir Jaffe’s late 15th-century Haggadah, written in southern Germany, shows two hares running up a hill, with two dogs, and a hunter carrying a spear, in hot pursuit. The Hebrew text reads, “Yayen (wine), kiddush, ner (candle), havdallah, zman (time),” often abbreviated with the mnemonic “Yaknehaz.” The mnemonic refers to the agenda of the Passover Seder on a Saturday night (as it occurs this year): pouring wine, blessing the wine, lighting the candle, reciting the prayer that ushers out the Sabbath, blessing the Passover day.

Louis Feldman, Abraham Wouk family professor of classics and literature at Yeshiva University, said that the rabbit hunt is merely a pun on this mnemonic, which resembles the German phrase “jag den Has” (hunt the hare): “I have never seen it in juxtaposition with anything else.”

Leah Adler, head librarian at Y.U.’s Mendel Gottesman Library of Hebraica-Judaica, and Israel Sandman, associate lecturer at University of Wisconsin-Madison, both cited Yaknehaz as the explanation of the hunt, as well.

David Gilner, director of libraries at Hebrew Union College-Jewish Institute of Religion, agreed that the rabbits symbolize the mnemonic, but he said that some examples do not conform to this model, like a 15th-century Bible where a chase scene casts God as the hound and the hare as Egypt. In the Barcelona Haggadah, which dates to the mid-14th century and is in the collection of the British Library, “the imagery goes far beyond this,” Gilner said, where “you will see a dog offering a hare a goblet of wine as she is disrobing,” and on the previous page, “the hare is portrayed as the ‘mother’ while a pig-snouted creature says Kiddush.” According to Gilner, the undressing and the snout reflect “a long Jewish ambivalence with drinking and intoxication.”

Katrin Kogman-Appel, associate professor in the department of the arts at Ben-Gurion University of the Negev, dismissed the Yaknehaz explanation, instead arguing that the hunt, which is “quite common in Ashkenazi manuscript painting in general,” is “an allegory of anti-Jewish persecutions.” She cited the dogs serving hares in the Barcelona Haggadah as “an inversion of the allegory hinting at messianic times.”

According to Ori Soltes, professorial lecturer at Georgetown University, the hunt could also refer to the kid in the “Had Gadya” song, which is part of the Passover Seder. “A symbol of Israel, ever pursued but, with God as our ally, managing to stay ahead of the dogs,” he explained. Soltes added that the symbol could also be imported from non-Jewish sources, where rabbit hunts refer to springtime, “and also what the mucky-muck non-Jews do in the spring.”

Soltes said rabbits might have initially symbolized fertility, but a non-Jewish printer, thinking of Easter as a time of spring, rebirth and sexual freedom, may have injected the rabbit into a Haggadah. “So in the end, not only does the rabbit end up associated with Passover, but a rabbi, finding it in a Haggadah, assumes that it has Jewish sacred significance relevant especially to Passover.”

Daniel Traister, curator of research services at the University of Pennsylvania’s Annenberg Rare Book and Manuscript Library, said another pun was at play. “Cony” refers to a rabbit, while “cunny” means vulva. But Traister warned about the ambiguity of such identifications — for example, the deer hunt, which suggests either “the hunt for Jesus Christ and divine love” or “the hunt for a ‘dear’ or for sexual love.”

In pagan and early Christian art, rabbit hunts often symbolize sex. But Vivian Mann, Morris and Eva Feld chair of Judaica at the Jewish Museum, insisted that rabbits in the Haggadot do not symbolize sexuality in the context of a hunt scene. “There they are simply the focus of the hunt,” she said. Mann added that manuscripts were so expensive to produce during the medieval period that Jewish patrons certainly would have checked every illustration. “Even later-printed Haggadot produced by Christian-owned presses were edited and overseen by Jews,” she said.

Diane Apostolos-Cappadona, adjunct professor of religious art and cultural history at Georgetown’s Prince Alwaleed Bin Talal Center for Muslim-Christian Understanding, stressed the ambiguity of medieval imagery. “No symbol is as simple as ‘Red is stop, and green is go,’” she said. Apostolos-Cappadona added that the symbol was originally a pagan reference to Venus, but “Christian art accepts or baptizes or assimilates things and gives it a Christian spin. A lot of these stories that get into classical art and mythology and Christian art and mythology, and I’m sure Jewish art and mythology, come from early classical texts on the nature of animals.”