ISRAELI PASTORAL: Rubin?s recent works on the block includedtion in Berlin after Kennedy; no one would

At Sotheby’s most recent auction of Israeli and international art, an annual event held in New York each December, Reuven Rubin accounted for six of the top 10 lots, led by “The Big Bouquet,” a large 1963-64 painting of flowers on a windowsill. The work fetched slightly more than its $200,000 to $300,000 estimate. 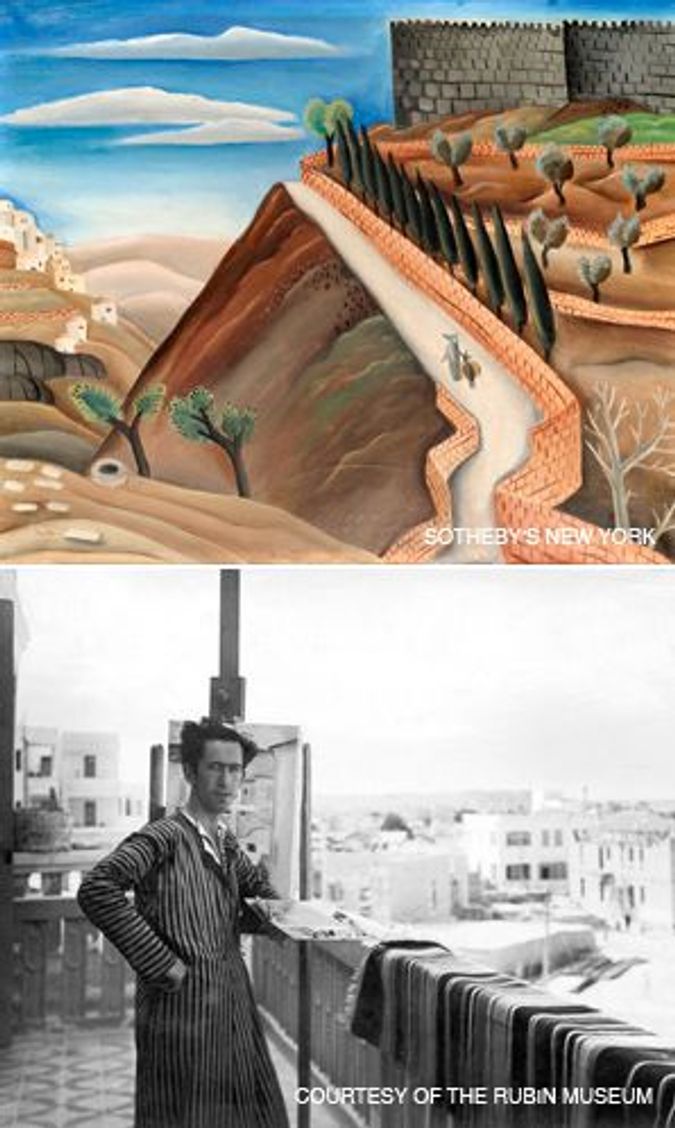 The View From Here: Reuven Rubin, who captured the great promise of Israel?s pioneer generation, has recently emerged as one of the country?s most sought-after 20th-century painters. (Top, ?Ramparts of Jerusalem.?)

ISRAELI PASTORAL: Rubin?s recent works on the block includedtion in Berlin after Kennedy; no one would

Although abstractionist Mordecai Ardon’s 1963 “Timepecker,” holds the record for an Israeli artist at auction — $643,200 — Rubin, who died in 1974, has of late emerged as the most sought-after 20th-century Israeli painter. Rubin’s prominence in the world of Israeli art is being further crystallized by the Tel Aviv museum that bears his name, as it assembles a complete catalog of the artist’s works — the first such survey for an Israeli artist.

Born Reuven Zelicovici in 1893 — the eighth of 13 children in a poor Hasidic family in Galatz — Rubin went on to achieve international acclaim over a prolific career that lasted literally until the day he died in 1974. He is, however, best known for first impressions he gathered upon settling in Palestine in 1923, when he famously pitched a tent on the Tel Aviv seashore in order to capture the blinding Mediterranean sunlight and birth of the city. These preliminary impressions, rendered in flat forms and a naive, almost folkloric style, captured the great promise of Israel’s pioneer generation.

“In the surfaces of the 1920s, everything is sprouting, whether a bud in the ground or on the pattern of a women’s dress,” said Carmela Rubin, the artist’s daughter-in-law and the director and curator of the museum that occupies his former home on Tel Aviv’s Bialik Street.

“In these primitive works, he painted almost as if he didn’t know how because everything was such a new experience,” added Karen Chernick, the researcher overseeing the museum’s recently initiated catalogue raisonné project.

Rubin’s life and art continued to chart the history of the country — from becoming the first Israeli ambassador to Romania in 1948 to presenting an almost messianic fervor in works from the 1960s, following the return to the Old City in the aftermath of the Six Day War. He made some dark family portraits and little-known Christian-themed pictures while still in Romania, as well as depictions of sights like Bryant Park during his frequent visits to New York, but his main subjects were what Chernick called “landscapes very much inspired by the fact that this is a biblical land.” He often highlighted their human elements and employed recurring motifs, like wildflowers and pomegranates.

“Old Sycamore Trees,” the image set to go on the block later this month, has a rich history of its own. Depicting the main route that connected Jaffa to the Yarkon River and the villages of Sumeil and Sheik-Munis — now King George Street in Tel Aviv — the painting was stolen in 1982 on its return to Engel Gallery in Jerusalem, which had loaned it to the Jewish Museum in New York. It was discovered five years later at a Jaffa flea market. Following a long legal dispute over ownership, it is being consigned by the American government, which had paid an $80,000 indemnity to Engel upon the work’s disappearance. A similar example from 1929 sold for $442,500 at Sotheby’s Tel Aviv in 1999, still the auction record for Rubin.

Such iconic images routinely command top prices in international sales of Israeli art, but increasingly, even later works, which tend to feature looser, more airy brushstrokes and layered, brighter patches of color, are equally snapped up. With rising demand and prices, Rubin’s works are appearing with some regularity. According to Rivka Saker, chairman of Sotheby’s Israel, when the auction house began Israeli art sales in 1980, the most expensive examples would go for between $30,000 and $50,000; today, she said, prized offerings regularly command $300,000 to $450,000. According to the official conservator for the Rubin Museum, Meir Stern — whose Stern Gallery in Tel Aviv has handled more than 140 paintings, drawings and watercolors by the artist in its three decades — private sales of the best work can run up to $800,000.

Each work that surfaces is a boon to the catalogue raisonné, which was initiated in September 2006 to document Rubin’s estimated 1,500 to 2,000 oil paintings and sculptures. So far, Chernick has researched the Rubin family collection, composed of some 200 works, as well as the country’s three major art collections — those of the Israel Museum in Jerusalem, the Tel Aviv Museum and the Israel Phoenix Assurance Company. The next step is to track down Rubin’s works in private Israeli collections and public and private collections abroad, with concentrations in New York, a sometime home for the artist, and Los Angeles, where he was a darling among Hollywood powerbrokers. Chernick estimates that this endeavor will take another three to four years.

Among the most useful tools in this hunt are meticulous albums of black-and-white photos of works accompanied by detailed notes on their buyers, presciently compiled by the artist’s 97-year-old widow, Esther. The two met, and quickly became engaged, during a 1928 sea voyage to Palestine. She was an 18-year-old girl from the Bronx who had won the trip in a Young Judea competition; he was returning from a successful show in New York. “There are some works that I only know from these photos,” Carmela Rubin said. “Our main objective is to pinpoint as many as we can.”