Seeking Jazz or Sex Or Soup? 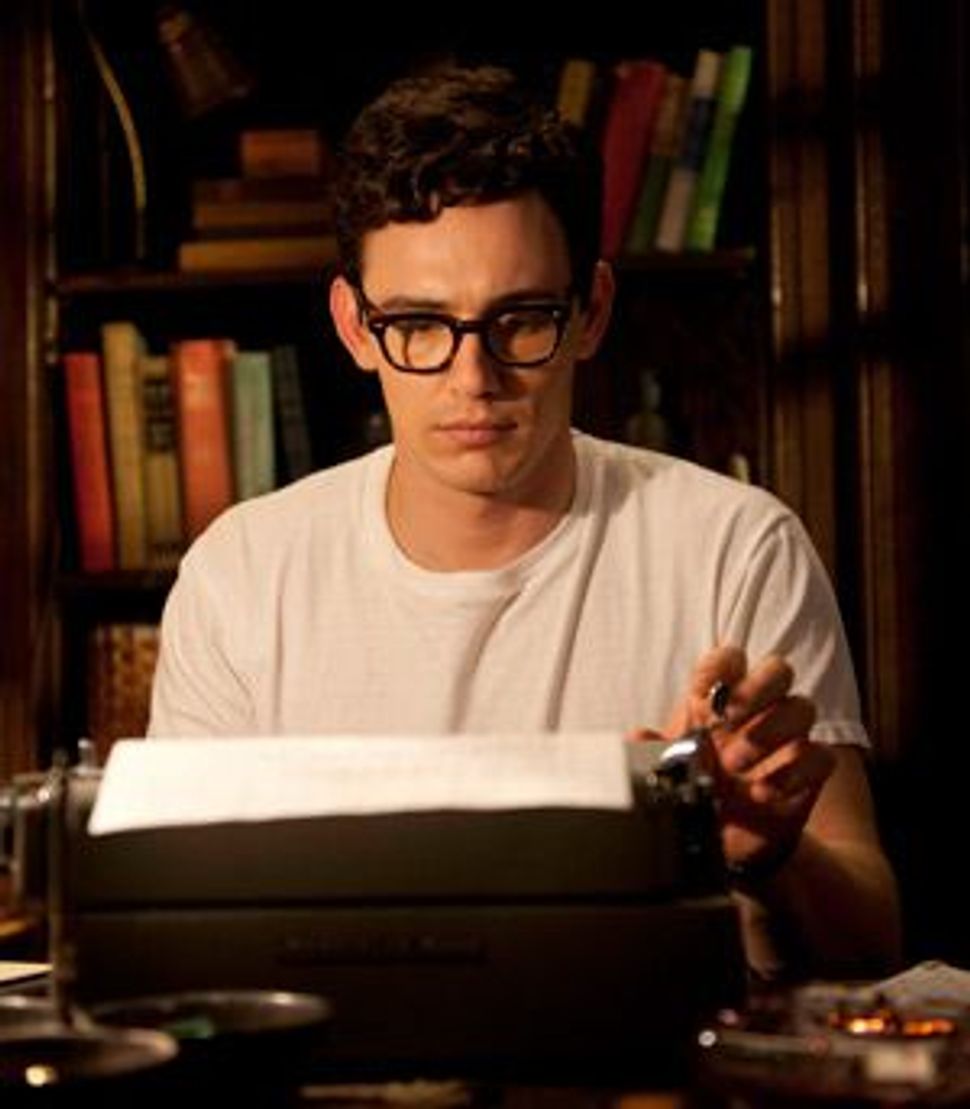 Lingua Franco: Allen Ginsberg (James Franco) at work on the poems and correspondence that changed the century. Image by OSCILLOSCOPE LABORATORIES

?Paste this on your hat, Ginsberg is the great poet of the Jews of the 20th Century in America and his position among Americans is commensurate with the extent of the importance of the position of the Jews themselves, naturally.? Thus wrote Jack Kerouac to Allen Ginsberg in 1955, in one of the hundreds of letters exchanged between the two writers during their legendary correspondence, recently compiled in ?Jack Kerouac and Allen Ginsberg: The Letters? (Viking). 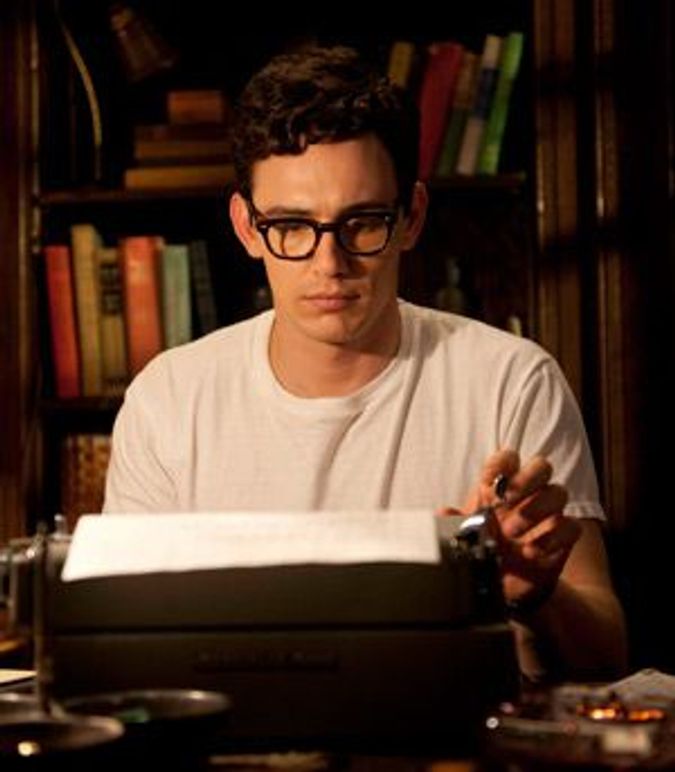 Lingua Franco: Allen Ginsberg (James Franco) at work on the poems and correspondence that changed the century. Image by OSCILLOSCOPE LABORATORIES

Kerouac, born to a French Canadian Catholic family, and Ginsberg, son of communist Russian Jews, shared ecstatic, rebellious and spiritually charged visions that came to transform America. The transformation ? literary, social and political ? that served as the catalyst for liberation movements of the 1960s started with the publication of Ginsberg?s 1956 poem ?Howl,? which is the subject of an eponymous film, now in theaters.

The significance of the Ginsberg-Kerouac correspondence is not merely academic, for as Ginsberg said in a 1966 interview in The Paris Review, his aim was to ?approach the Muse to talk as frankly as you would talk with yourself or with your friends.? Conversely, dialogue between him and his closest friends was often an evocation of the literary muse. A crucial element of their aesthetic practice, dialogue was also a source of inspiration: Beat Generation writers repeatedly appeared in each other?s writing in semi-fictional, mythic guises.

In the same letter in which he called Ginsberg ?the great poet of the Jews,? Kerouac took things a step further ? perhaps too far: ?Jews are bound to neglect their own best Ginsberg Jesus; the prophet is without honor; it is a classically Jewish thing, due to fact, that Jew-ism is a materialistic bigcity hard boiled hardminded ism and the high fine cultured poet is like their finest silver, under napkins under everything else hidden in mahogany commode.?

Ginsberg did not take offense. A number of years earlier, he had written to Kerouac, calling him a ?Goyeshe Kopfe ? a Goy?s head ? as differentiated from Yiddishe Kopfe ? a shrewd Yiddish foresight,? but this time, he, perhaps, agreed with his friend?s verdict. Writing ?Howl? not long after Kerouac?s letter, he referred to himself as the ?meat for the Synagogue, cast on the pavement.? He even found the comparison to Jesus apt enough, describing himself and his circle, in the same poem as those who

rose incarnate in the ghostly clothes of jazz in
the goldhorn shadow of the band and blew the
suffering of America?s naked mind for love into
an eli eli lamma lamma sabacthani saxophone
cry that shivered the cities down to the last radio

The fourth line here jazzifies an Aramaic quotation from the Gospel of Matthew, a phrase that Jesus utters in his final moments on the cross. The reference is all the more curious, since it comes originally from Psalm 22 (?eli eli lama azavtani?? ? ?Lord, Lord, why have you forsaken me??) and Ginsberg chose the Gospel reading over the Tanach, associating himself with the figure of Jesus rather than the Psalmist, King David.

The young poet found the image of mythic sacrifice and victimhood more appealing than the psalmist?s royalty. Especially before the publication of ?Howl? and the recognition that followed, Ginsberg identified strongly with the world?s archetypal outcasts. ?Howl? famously describes the ?best minds of my generation destroyed by madness, starving hysterical naked? as they were ?seeking jazz or sex or soup,? and is a radical tale of rebellion, ecstasy of tortured survival, spiritual and sexual revelation, filled with jazz and dark humor. Although such identification remained with Ginsberg throughout his illustrious career, this poem was the turning point in the history of the Beats. After publication of ?Howl? by City Lights in 1956, everything exploded: ?Howl? tore through the American discourse, exposed the author?s unmistakable genius and opened the doors to publication of other Beat works ? including Kerouac?s ?On the Road.?

Precisely this point in history is the focus of ?Howl,? directed by Rob Epstein and Jeffrey Friedman, and starring James Franco as Ginsberg. The biopic creatively presents and interweaves a number of narratives: a reconstruction of the 1957 obscenity trial against City Lights for publishing the poem, an imaginary interview with the poet and a declamation of the poem itself. It is the latter that makes the film particularly compelling: ?Howl,? the poem, is the centerpiece of ?Howl,? the film, and is recited in its entirety.

According to the producers, they struggled to find an effective way to incorporate the lengthy poem into the film. The solution came to them in the apartment of Beat personality Tuli Kupferberg (referenced in ?Howl? as the man who ?jumped off the Brooklyn Bridge this actually happened and walked away unknown and forgotten into the ghostly daze of Chinatown?). On Kupferberg?s bookshelf, producers saw a copy of ?Illuminated Poems,? a 1996 collaboration between Ginsberg and graphic artist Eric Drooker.

They hired Drooker to illustrate the entire poem for use in the film, and the resulting work was also published as a graphic novel earlier this year. Drooker?s darkly surreal, hallucinatory illustrations provide a dynamic and fluid background to the poem that alternates with flashes of black-and-white footage of Franco as Ginsberg performing the poem for a crowd of friends.

For all its charm, an earlier documentary, ?The Life and Times of Allen Ginsberg? (1994), failed to find such an effective counterpoint of sound and image. In ?Life and Times,? the camera zooms in and out of vaguely relevant photographs while poems are recited, detracting from the words rather than contributing to them. Drooker?s animation, however, adds a visual accompaniment that paces along with Ginsberg?s frenetic lines.

In the interview segment of the film, some of the quotes repeat effective material from the older documentary. Others are assembled from a wide range of Ginsberg?s writings that includes the poet?s heartbreaking recollections of the time spent at Columbia University?s Psychiatric Institute in 1949, where he narrowly escaped a lobotomy, having ?promised the doctor to be heterosexual.? The quoted writings also include tales of love, tales of philosophical and poetic revelations and aesthetic statements: ?What prophecy actually is is not that you actually know that the bomb will fall in 1942. It?s that you know and feel something that somebody knows and feels in a hundred years.?

Although too handsome for the part, Franco does an impressive job of playing Ginsberg, closely mimicking the bard?s intonations and signature motions ? down to squinting. The biggest problem with the film, however, is that it presents the publication of ?Howl? as the pinnacle of Ginsberg?s career. Shortly after the concluding shots of the trial and the poem?s final lines, we?re informed of Kerouac?s passing (which occurred 12 years later) and provided with a brief overview of Ginsberg?s post-?Howl? work ? all to the tune of his ?Father Death Blues? composition, sung by the aging poet himself. The last 40 years of Ginsberg?s life were wonderful but downhill, the film seems to imply.

In 1958, in a conversation with Kerouac, Ginsberg vowed to write an ?epic poem? that would truly address the ?worldwide plight of masses,? a subject that, he admitted, he had not succeeded in exploring to satisfaction in ?Howl.? That epic poem was, of course, ?Kaddish,? which narrates the story of the madness and death of Naomi Ginsberg, the poet?s mother. Less abstract and more intensely personal and tortured, more ethnic and explicit than ?Howl,? the poem, framed with references to Jewish prayer for the dead, unfolds Ginsberg?s personal drama into the epic realm of the universal.

Naomi Ginsberg?s recurring paranoia in late 1930s led to her eventual confinement in mental institutions, her lobotomy and, finally, a lonely and untimely death. Yet, for a communist Russian Jew in America, a degree of paranoia was far from unreasonable. Naomi?s madness was neither accident nor genetic fluke, the poem seems to imply. After ?Kaddish,? the wave of hysteria that rushed through ?Howl? takes on a whole new context and meaning. ?Howl? was in no small part about this shared psyche, the common trauma of a poet and his mother ? the inheritance of repression and ensuing madness.

When William Carlos Williams, legendary American poet and Ginsberg?s mentor, wrote in his introduction to ?Howl? that the experience recounted in the poem is ?similar in every way, to that of the Jews in the past war,? it seemed like a terrible exaggeration. Seeing ?Howl? through the lens of ?Kaddish,? though, Williams appears to be on to something.

?Life and Times? captures the poet himself in his kitchen many years after the first publication of ?Kaddish,? reading the poem on camera. Suddenly, his voice begins to quiver; his lips tremble as he struggles with the reading, the reliving of the work. This terrible depth, the frank emotional essence of the poet, as immortalized in the older documentary, is something the new film is unfortunately missing ? not for technical or logistical reasons, but simply because Ginsberg grew far past ?Howl,? a fact that ?Howl? the movie fails to adequately acknowledge.

The film does re-create a significant moment in American history, which Ginsberg summarized so well in a 1958 letter to Kerouac: ?I think it?s strangely up to us to save U.S ? or what else to do next? Quixote wakes in the end last five pages.? Just like Don Quixote awoke from his illusions at the end of Cervantes?s book, so, too, Ginsberg prophesies, America will awake ? in its final pages ? from materialism, repression and militarism. And this is the legacy Ginsberg left for us: dreams of radical poetic awakening, and paranoia of imminent apocalypse.

Watch the trailer for ?Howl? below:

Jake Marmer writes about Jewish poetry for the Forward.

Seeking Jazz or Sex Or Soup?