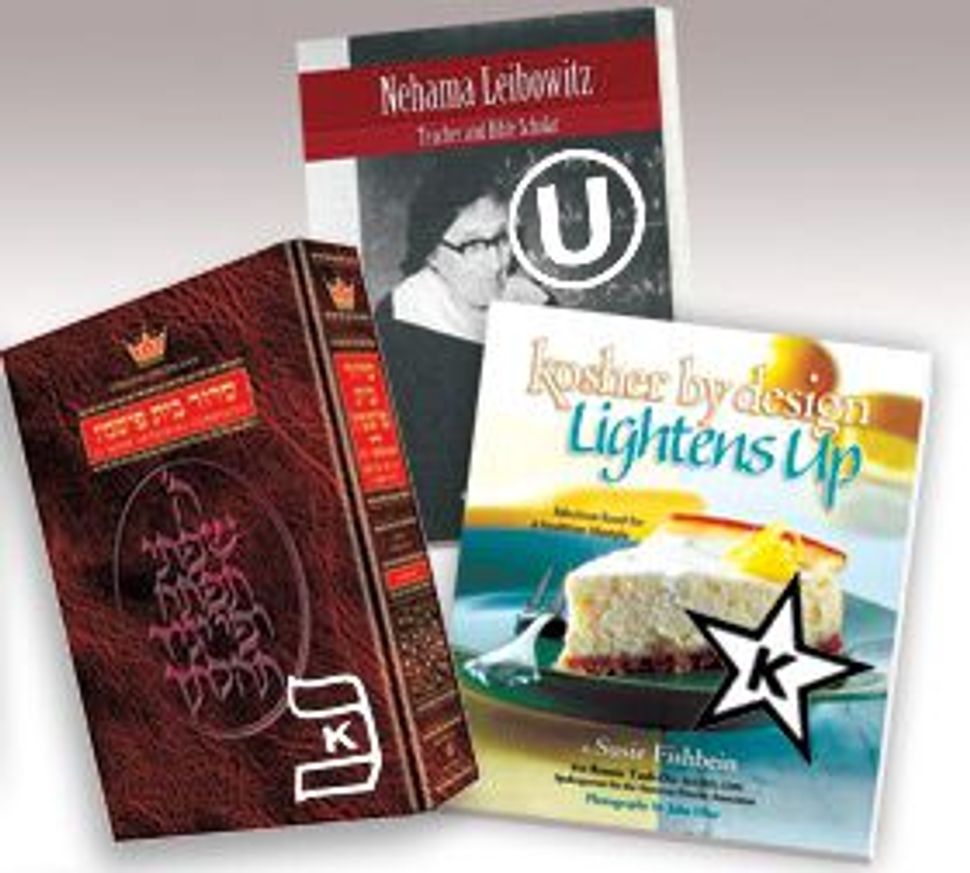 Despite the much-touted death of the physical book, the Orthodox Jewish publishing industry is booming. Perhaps because of the prohibition against using electricity on holidays or on the Sabbath, the ?ArtScroll revolution? is well under way.

?Orthodox by Design? by Jeremy Stolow is the first serious sociological attempt to understand the relationship between ArtScroll ? with its accessible, attractive and often-translated texts ? and the shift of the Modern Orthodox to the (religious) right. 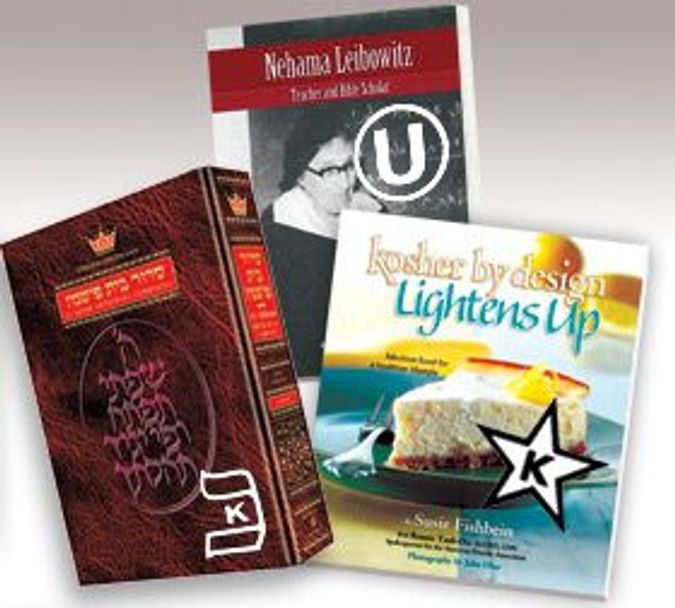 A professor of religion and communications at Concordia University in Montreal, Stolow views ArtScroll not as a mirror or driver of this move, but as part of a ?parallel? trend that has seen a new, right-wing ?x? form of Orthodox Judaism emerging in recent years. Emphasizing punctiliousness, narrow rabbinic commands and rigid adherence to Torah study, Stolow labels this development ?Haredism,? from the Hebrew word haredi, which refers to the ultra-Orthodox.

Through its ambitious translation program, ArtScroll has given many access to new texts. It has also expressed more ultra-Orthodox tastes by presenting venerated rituals in new wrappings. It hosted a museum opening to launch a new Talmud; provided a party planner for its cookbook series, and showed tassels, velvet and crystal on the holiday table, conjuring up kingly images. ArtScroll books have become not only ?sources of knowledge,? but also ?desirable commodities and emblems for public display? among the English-language Jewish reading public.?

Stolow managed to penetrate the cherry leather facade of ArtScroll and produce a book that, though prone to indulge in scholarly lingo, is thoughtful, informative and keenly attentive to cultural nuance. He is able to trace the movement from its complete retranslation of the Tanach to the ongoing series of ?Kosher by Design? food books by Susie Fishbein.

The ArtScroll saga begins with the fact that all religions nowadays use a ?dizzying array of technologies, genres and forms? to get out messages of faith and to foster impressions of ?imagined communities.? Not surprisingly, proponents of Judaism have turned heavily to books, playing on the chord of ?scripturalism.? Stolow writes that the ?printed text has assumed a new status in Jewish culture.?

This new ?scripturalism? is not peculiar to ArtScroll. Jewish religious publishers include the self-described Modern Orthodox Jerusalem publishing house Urim, Targum Press and the new OU Press. The latter was set up under the general editorship of Rabbi Menachem Genack, CEO of the kosher food supervisory organization OU Kosher.

Each publisher has its own selling points. Targum, which calls itself Modern Orthodox but is close to ultra-Orthodox, has a list of family-friendly lifestyle books. Urim, aiming for a thoughtful audience, recently put out a new biography of Israeli scholar and teacher Nehama Leibowitz; a new English translation of Kedushat Levi, which is a commentary on the Torah by Levi Yitzchak of Berditchev, and ?The Path of Torah? by Naftali Tzvi Yehuda Berlin (?The Netziv?).

Even with the fragmentation, the publishers talk of a growing market. Due to popular demand, Horizons, Targum?s quarterly magazine, last year, became a monthly. Aryeh Mahr, CEO of Targum until his death in February, said that Targum was needed because the Modern Orthodox are drifting to a Haredi lifestyle and want to read ?acceptable? literature.

Genack originally conceived of the OU Press as a vehicle to further spread the teachings of the late Rabbi Joseph B. Soloveitchik, philosopher and Modern Orthodox leader. The publisher?s first book came last year, when ?The Seder Night: An Exalted Evening,? with commentary from Soloveitchik, was co-published by KTAV Publishing House. Books on ?the Rav?s? insights into Lamentations for Tisha B?Av and on the siddur are forthcoming, as is a book by Connecticut Senator Joe Lieberman on Sabbath observance (this last one will be co-published by Howard Books, a religious imprint of Simon & Schuster.)

?It is hoped that the OU Press will become a platform for young Orthodox Jews,? said Genack, who keeps OU?s publishing operation small (seven books are planned for next year) and declines to say whether he is in competition with ArtScroll.

Not all Jewish publishing is Orthodox. Reform Jewish leader Stuart Matlins says frankly that he began Jewish Lights Publishing 19 years ago in Vermont in response to ArtScroll. Today, Jewish Lights puts out 25 new books annually, with 300 titles in print. Two years ago, someone bought the 2 millionth Jewish Lights book. ?Our books help all Jews understand why you should lead a Jewish life, and provide the resources to help you do so.?

Stolow chose to focus his study on ArtScroll and its English-language operation. It?s still by far the largest of these operations: Its siddur alone has sold more than 1 million copies, while its cookbooks, by Fishbein, are also top sellers. With some 80 new titles annually and 1,200 books in print, ArtScroll seeks to ?legitimate? a form of strict Orthodoxy. But Stolow also says that its books are also emblematic of the planning that goes into religious experiences these days.

As a publisher, ArtScroll began in 1976 when general editor Rabbi Nosson Scherman was an educator, and Rabbi Meir Zlotowitz had a modest graphics company ? ArtScroll ? from which the press got its name. The men knew they were on to something when they published a Megillat Esther to mark a mutual friend?s shloshim (30-day mourning period) and 20,000 copies of the books quickly sold out. ?Our timing was right,? Scherman said. ?Yeshiva-educated English speakers wanted to read works in English translation.?

Ever since its arrival on the scene, ArtScroll has been stirring debate. Last year, Martin Lockshin, Canadian scholar of medieval Jewish bible studies and Modern Orthodox rabbi, delivered a paper on ArtScroll to a Los Angeles gathering of the Association for Jewish Studies. He said the publisher was responsible for the ?growing fundamentalist leanings of the Modern Orthodox? the weakening of Modern Orthodoxy in North America? [and] a general shift of the Yeshiva University/Rabbinical Council of America world to positions that are now closer to those of the Haredi world.?

Later, Lockshin told me via e-mail that ArtScroll books could never have succeeded had there not been a ?proclivity for haredi or haredi-lite Judaism in North America. But once ArtScroll came along, theories and approaches that never would have crossed the minds of Modern Orthodox people are now often unconsciously adopted.?

But retired Rutgers University sociologist Chaim Waxman, who once said that ArtScroll spelled the ?hareditization? of Modern Orthodoxy, has now reversed his thinking. The publisher?s success, he says, merely reflects the ?Americanization? of Orthodoxy, which has liberal and traditional (Haredi) wings. ?There isn?t just one brand of Orthodox,? Waxman said.

Samuel Heilman has yet a different take on the explosion of religious Jewish publishing houses. The sociologist of Modern Orthodoxy believes that the market remains small and is not expanding. He questions how profitable the ?industry? is. ?There is competition for a small audience here, though an online presence allows them to advance a bit beyond the traditional market,? Heilman said. ArtScroll, he said, ?is for Haredi wannabes, not real Haredim. True Haredim don?t need English translations. They even eschew the ArtScroll Talmud for the traditional one.? But Heilman agrees with Stolow that books are a status symbol. ?Bindings? can make the Jewish home bookshelf look impressive. Jews prominently display their books.?

Rather than see the success of ArtScroll as the death of Modern Orthodoxy, Stolow is willing to consider the view that ArtScroll is providing a ?vital tool? for recovering an authentic Jewish textual tradition and helping devout Jews navigate the modern world. He entertainingly analyzes the ?Kosher by Design? cookbook craze, noting that though books dedicated to kosher cuisine have been around since the 18th century, ArtScroll?s treatment is new. He writes of Fishbein?s ability to offer ?designer cuisine? with ?balebatish style,? which ?connotes a mood of elegance and dignity? and invokes a ?long-standing metaphor of the Torah as king, adorned with a crown.? Nothing less than what we?d expect from Fishbein, whom Stolow calls ?the Martha Stewart of Orthodoxy.?

Netty C. Gross is a co-author of the forthcoming ?Israel?s Civil War: Jewish Marriage and Divorce? from Brandeis University and The University Press of New England.