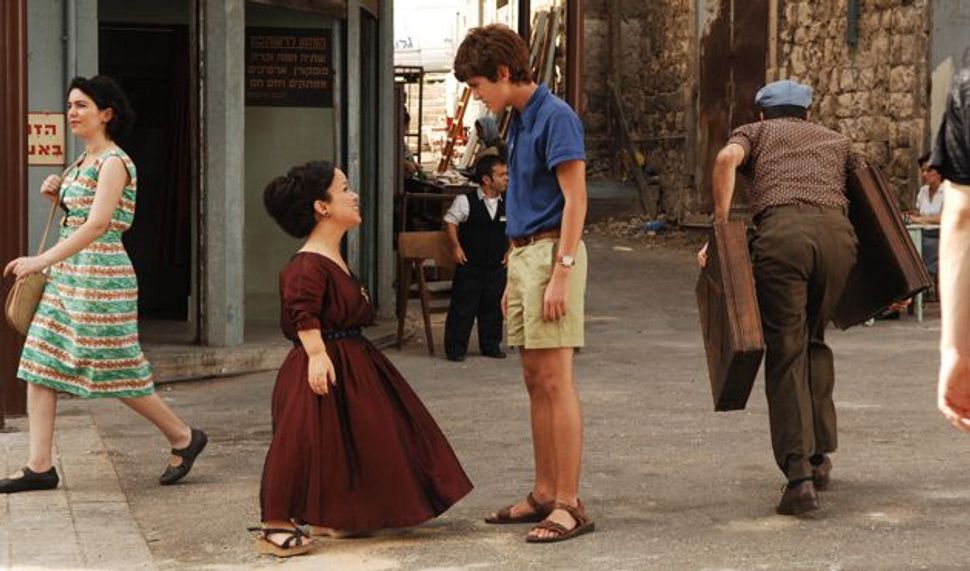 Shortly after the North American press premiere of “The Matchmaker” hit technical difficulties and screened without English subtitles, the film’s Israeli director, Avi Nesher, tried to calm himself. “Wrist-slashing is an option,” he said.

About 100 journalists and industry types showed up for the recent Toronto International Film Festival screening, and dwindled to a handful within minutes.

“The most interesting part of making movies is when what you did finally meets the people, whether they are in Tel Aviv or Toronto,” Nesher said. “It’s crushing that it didn’t happen.”

When the technical gods do not interfere, Nesher’s works usually connect. He is one of Israel’s most popular directors, boasting a string of homegrown hits. His 2004 film about a girl from India adjusting to life in the Negev, “Turn Left at the End of the World,” sold more than 600,000 tickets, according to The Jerusalem Post. That’s big box office in a country of fewer than 8 million people.

Nesher estimated that his average budget was about $2 million, and he says that all his films have made money — just not the crazy money that he could be making in Hollywood, where he toiled for 10 years as a writer-director of such B-feature titles as “Timebomb” (1991) and “Doppelganger” (1993), the latter featuring Drew Barrymore.

He still gets offers. He turns them down. A recent jog he took on a Tel Aviv beach perhaps explains why: Eight or nine people approached him to say how much “The Matchmaker” had moved them. “It’s very joyous to make these movies that have a part in your country’s cultural life,” he said.

“The Matchmaker” takes place in the summer of 1968. Israel has settled into the everyday after a 20-year struggle to survive, capped by victory in the 1967 Six Day War. An imposing matchmaker, Yankele (Adir Miller), works what he calls “special cases,” meaning the scarred, freakish and lovelorn who occupy the lower city of Haifa. One favorite client is Sylvia (Bat-El Papura), a dwarf who runs a movie house that screens only love stories; however, she yearns for a romance of her own.

Much of the action is filtered through the eyes of the teenage Arik (Tuval Shafir), who scouts prospects for the matchmaker. For Arik, America’s 1967 Summer of Love arrives in Israel a year later, in the form of Tamara (Neta Porat), who has returned from the United States blaring rock ’n’ roll and talking of free love.

“I’ve lived in Israel many years, and it’s like any other country,” Nesher said. “It’s about having fun. It’s about surviving. It’s about where your next meal comes from. It’s about who you fall in love with. It has big historical events as the wind to its sails, but the way life is conducted is ordinary.”

Nesher blasts the notion that he is tough to pin down thematically. He explained that all his films tackle Israeli mythology through key subjects: immigration (in 2004’s “Turn Left at the End of the World”), religion (2007’s “The Secrets”) and freedom fighters (1984’s “Rage and Glory”). Even his first movie, a 1979 musical called “The Troupe,” examined the Israeli ideal of the collective, he said.

“The Matchmaker” quietly evokes the Holocaust. All the characters have been touched by this massive tragedy. Some, like Yankele, bear obvious physical evidence. Nesher’s own parents were survivors, and his mother did not speak of the experience until two years ago, he said. And even then, she talked to Nesher’s children, now 13 and 9, not to Nesher himself.

“The Holocaust is so deeply embedded in the national consciousness,” he said. “You consider yourself an outcast — being a child of parents who are Holocaust survivors. It is an overriding experience and emotion, so you become sympathetic to everything outcast and very open to it.”

The misfits of “The Matchmaker” — titled “Once I Was” (“Pa’am ha’yi’ti”) in Israel — yearn to squeeze the most out of the daily routine, no matter how horrible the past. (The dwarves running the movie house are rooted in historical fact: A similar family endured Dr. Mengele’s gruesome experiments before immigrating to Haifa.)

“It’s about accepting people who are not like us,” said Nesher, who borrowed elements of Amir Gutfreund’s 2008 book “When Heroes Fly” and collaborated with the author on the script. “These are people that I know, people I relate to.”

“The Matchmaker” earned seven nominations for Israel’s version of the Academy Awards, providing further validation that Nesher made the right move in choosing projects of passion over stateside thrillers. A native of Israel who lived for years in New York City as a student at the Ramaz yeshiva and Columbia University, Nesher said he considered his adventures in Hollywood an exercise in making movies from the head.

Now that Nesher makes movies from the heart, he believes there is no formula to undermine their soul.

“There’s no particularly happy ending, and George Clooney is nowhere in sight,” he said.

On a happy note to Nesher’s bittersweet movie, the rest of the screenings in Toronto unspooled with the subtitles intact, the film’s publicist said. All the public showings were sold out, reinforcing an exchange I had with Nesher about film fans not having to be Jewish to enjoy his work.

Said the filmmaker, “Apparently the word is out.”

Ron Dicker is a freelance writer based in New York who writes regularly for the Forward.

Watch the trailer for “The Matchmaker” below: