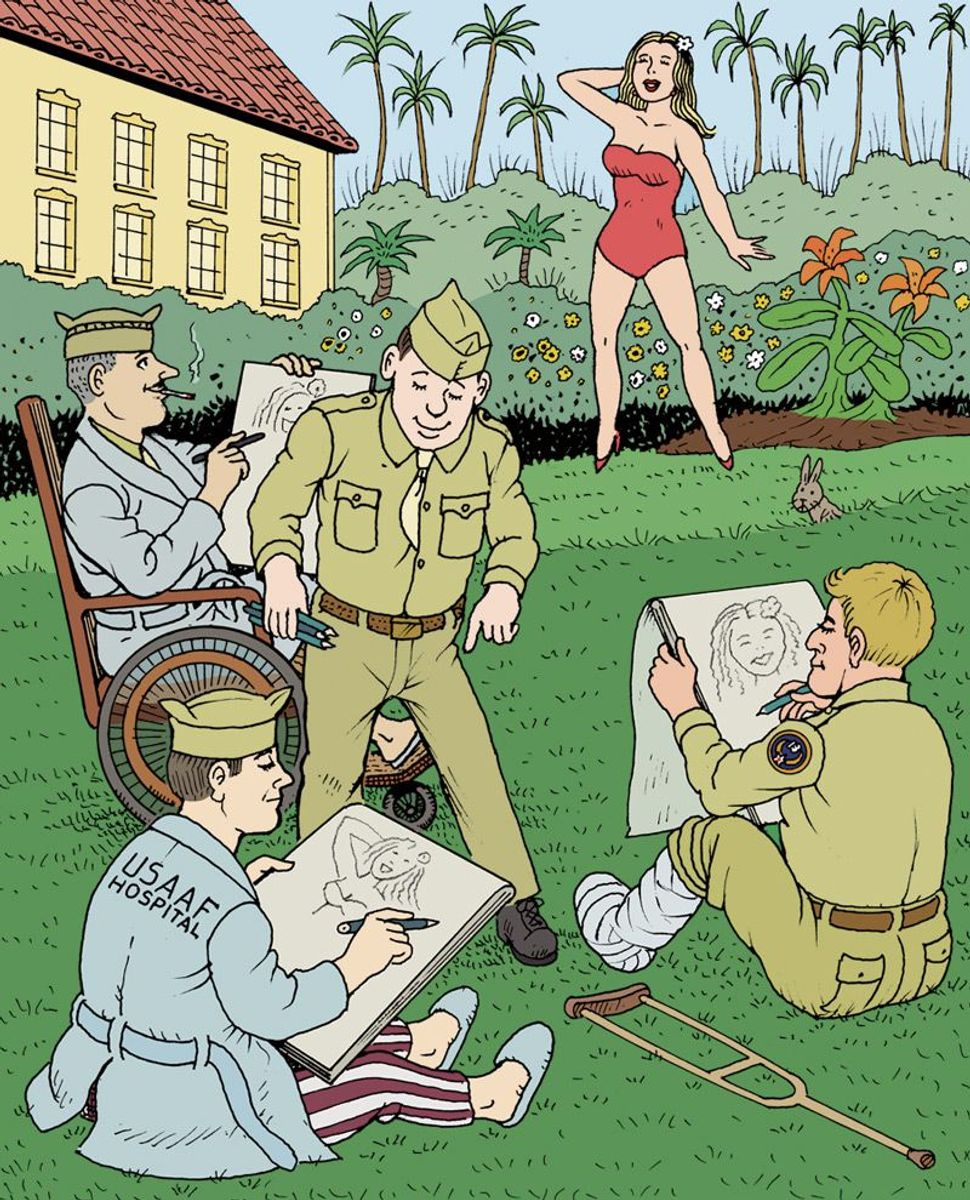 The biography “Al Jaffee’s Mad Life” couldn’t have a more apt title. Jaffee’s engaging tales of his mad, mad, mad childhood are even stranger than his long tenure as a cartoonist at Mad magazine. A journey through the Jewish bizarre, Jaffee’s life story starts out as a near-typical one of a family of Jewish immigrants, but then takes a series of crazy twists and turns, one of which lands him on a Birthright-shtetl program.

Jaffee was born in Savannah, Ga., to immigrant Jewish parents who had gone south for economic opportunity. His father, well liked and successful, managed a department store. The Jaffees, by all accounts, were upwardly mobile. After living what seemed like a normal American childhood until he was 6, Jaffee experienced a dramatic life change when his mother, in her crazed wisdom, decided that America was not an appropriate place to raise children. She packed up her three boys and schlepped them back to Zarasai, the shtetl of her origins in Lithuania, without their father.

Back to the shtetl? That was practically unheard of. Jews rarely, if ever, returned to the poverty and anti-Semitism of Eastern Europe, but Mildred Jaffee left the relative comfort of a new life in the United States to return to a virtual 19th century, complete with dirt floors, gas lamps and outhouses, the latter of which was so unforgettable that after his first visit, Jaffee memorably commented, “You want to have your nose amputated.”

Jaffee likens the situation of being a shtetl Jew in Lithuania to being black in Georgia in the 1920s — in other words, not very pleasant or secure. What drew his mother there remains a complete mystery. Even her own father demanded that she take the kids and return to America. But she refused and remained in the shtetl, keeping the boys with her.

Jaffee and his brothers kept in contact with their father via mail. And their father, knowing the boys’ love for newspaper comics, sent the funnies section to Zarasai for them. Reading “Boob McNutt” and “The Katzenjammer Kids” in the shtetl was, as Jaffee put it, “a lifeline between him, his native land and his father.” As for young Al (who had become Avraham in the shtetl), he loved to draw the characters from the funnies, copying them to create his own cartoons. His first works were based on the Bible stories he heard in heder.

After a full year in the shtetl, Al’s father, Morris Jaffee, finally came and got his sons and brought them back to America. But his wife refused to move to Charlotte, N.C., where Morris had gotten a job as manager of a cigar store. Instead, she moved the kids to the Queens neighborhood of Far Rockaway. Jaffee’s father eventually returned to New York and found work at the post office. But Mildred Jaffee kidnapped the kids and, incredibly, took them back to Lithuania — this time, on one-way tickets. Suddenly, 8-year-old Al found himself back in the shtetl, speaking Yiddish.

But he didn’t entirely lose touch with America. Thanks to his father, he and his brothers continued to receive the Sunday funnies section of the newspaper by mail. The boys so revered the comics sent to them that they cut out the strips they loved and carefully glued them into hand-sewn binders so that they could be read as long narratives. The boys also translated the cartoons into Yiddish for their shtetl friends, who loved them, as well. These comics would have a lasting effect on Jaffee and his career.

Many of the anecdotes in the book have to do with Jaffee being a shtetl delinquent and some episodes are illustrated in the book by Jaffee himself. He and his friends built bombs, mocked the rabbi and generally made trouble. On the other hand, the privation of the shtetl provided him with the opportunity to make use of his often brilliant ability to improvise. He created all manner of toys and games (baseballs from cow hair!), and the biography even includes Jaffee’s diagram describing how to make a fishing line out of a goose quill, cork, a twig and a horsehair. The lack of, well, everything, allowed his creative abilities to shine.

It was these creative abilities that would eventually lead him into the offices of Mad. But first he had to escape the shtetl. Fortunately, his father showed up in Slobodka, the town to which Jaffee’s mother had relocated with her sons in 1933, to take back his family. They all left except his mother, who refused to go, and the youngest child, whom she kept with her. She never made it out of the inferno that Europe would soon become.

But coming back to New York wasn’t a bed of roses. Morris Jaffee was not particularly successful, and the boys were shipped around to various friends and relatives.

As a result, one of the most important things Jaffee learned from his childhood experiences was not to trust adults; they did not have his best interests in mind. This is why he built a career on mocking them. Almost 90 years old, he’s still doing it. Immaturity, in fact, may be the key factor in his longevity.

Back in New York, Jaffee’s artistic abilities came into play. In one seminal moment, Jaffee — in junior high at this point — is sent to the principal’s office with another boy after having been asked to draw a picture in the art room. As a variety of recent misdeeds passes through Jaffee’s head, the other boy, Wolf Eisenberg, turns to him and says, “I tink dere gunna send us to art school.”

Lucky for Jaffee, that turned out to be true. Both he and Eisenberg, who would later become known as Will Elder, were sent to Fiorello LaGuardia’s brand-new High School of Music and Art. It was there that the two Bronx boys would meet a fellow student named Harvey Kurtzman and commence a friendship that would culminate in the hiring of this core group of cartoonists at Mad. The High School of Music and Art, Jaffee says, “saved my life.”

It was at Mad that he was allowed to exploit his creative abilities to the fullest, creating extended series like “Al Jaffee’s Mad Inventions,” “Snappy Answers to Stupid Questions” and, perhaps his most famous invention — a parody of the Playboy centerfold — the Mad Fold-In, a kind of “origami-style editorial” in which a page is folded in to reveal the reality of a given situation. Jaffee’s ever-popular Fold-Ins have appeared in nearly every issue of Mad since 1964.

As a seminal artifact of American popular culture, Mad is often revered as a product of heavily Jewish influences. The rollicking episodes described in “Al Jaffee’s Mad Life” offer a great deal of insight into the Jewish background of one of its main contributors.

The Jewish component to Jaffee’s humor is not always immediately apparent, but it comes into play when Jaffee discusses the impetus behind his classic series, “Snappy Answers to Stupid Questions.” “Oppressed people resort to humor,” he says, “They can’t afford to get angry.”