A Boardwalk Empire of Their Own 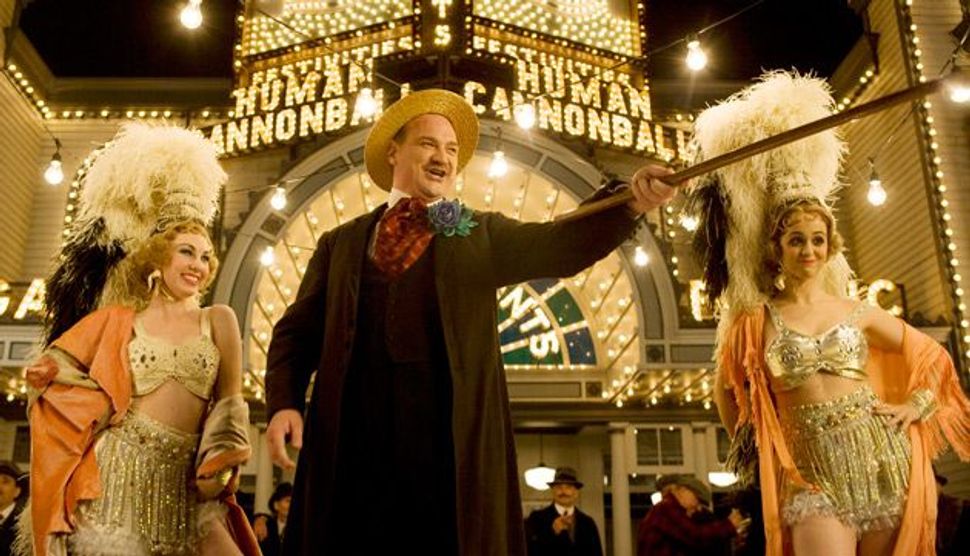 Spangles and Sequins and Lights: It?s just another fun-filled night on the boardwalk. Image by COURTESY HBO

Before Snooki ruled the Jersey Shore, Atlantic City’s reigning boss was Enoch “Nucky” Johnson. HBO’s new television series “Boardwalk Empire,” set in Atlantic City during Prohibition, draws on the true story of Nucky and his Irish, Italian and Jewish partners in crime. Ethnic and racial rivalries melted away in the bathtub stills so long as Nucky controlled the town from his oceanfront suite in the Ritz-Carlton.

During Prohibition, the Queen of Resorts lured hundreds of thousands to its beaches with the promise of sun and sin. Nucky provided the sin: gambling, prostitution and liquor. As Atlantic City’s treasurer, and with the help of friends who had such monikers as “Cappy,” “Stumpy” and “Skinny,” he helped turn crime into commerce, graft into governance and a glorified sandbar into the nation’s playground.

Throughout the resort’s golden age, top entertainers performed on the boardwalk, competing with such sideshow acts as the Diving Horses, midget boxers and Dr. Martin Couney’s incubator babies.

Day-trippers, known as “shoobies” promenaded along the wooden boards in their finery. At night, visitors could drift beneath the electric lights in rolling chairs and mingle with mobsters spilling out of speakeasies and backroom gambling dens. “Boardwalk Empire” gets these historical details and the admixture of frivolity and menace just right. Atlantic City emerges as the leading lady of the series, with its twinkling piers, posh nightclubs and fanciful hotels, though the ocean surf itself is absent for the most part.

The lovingly detailed sets steal scene after scene from veteran character actor Steve Buscemi, who stars as “Nucky” Thompson, the series’s renamed protagonist. Buscemi was great as a manic tough in both “Reservoir Dogs” and “The Sopranos,” but as Nucky he twitches and hunches through his scenes, too dissipated for the outsized role. The tailored suits seem to hang off Buscemi, perhaps a metaphor that reveals how uneasily Nucky assumed the mantle of fixer. Or maybe it exposes how uncomfortable Buscemi feels playing the lead. HBO clearly hopes that “Boardwalk Empire,” which airs in the former time slot of “The Sopranos,” will replace the dearly departed capo di tutti capi, the boss of bosses, of all mob dramas. But even with such big names as director Martin Scorsese and “The Sopranos” writer Terence Winter involved in the production, HBO looks to be betting on a losing horse.

While “The Sopranos” blended horror with humor, “Boardwalk Empire” is content to showcase the clumsy antics of Nucky’s secretary and driver, Kessler (Anthony Laciura), who is more “Fawlty Towers” than Ritz-Carlton. Dabney Coleman’s sneering talents are wasted in his role as Nucky’s former boss, the Commodore. Legendary Jewish comedian Eddie Cantor, impersonated with gusto by Stephen DeRosa, makes several appearances and gets laughs from his Vaudeville routines, but it’s hard to imagine Cantor’s shtick attracting the demographic that HBO is after.

The real problem with “Boardwalk Empire” is that the writers don’t work to convince viewers of anything beyond the glittery spectacle of period automobiles, weapons and costume jewelry. Character development and motivation seem an afterthought. A faded photo that Nucky keeps of his revered late wife remains a lazy gesture to back-story. Nucky’s whiz-kid protégé, Jimmy Darmody (Michael Pitt), returns as a hero from the Great War, only to become a violent thug who abandons his Princeton education and his family for the embrace of Al Capone (Stephen Graham).

Even Nucky’s nemesis, Agent Van Alden (Michael Shannon), conforms to every G-Man cliché: repressed, masochistic, devout. In case we miss the point, or in case we missed the Ezekiel-spouting hit man from “Pulp Fiction,” the self-righteous Van Alden recites from “The Book of Revelation” after a suspect curses him in Yiddish. The biblical quotations and the gangland mamaloshn serve the same purpose: to telegraph to viewers that the creators of “Boardwalk Empire” have done their homework, or at least cribbed from others who have.

In a pivotal scene of the pilot, directed by Scorsese and written by Winter, the young Jimmy advises Nucky that he no longer can afford to be “half a gangster.” Jimmy’s tip sounds suspiciously like the writers showing their hand. From this reviewer’s perspective, Nucky’s character needs to remain “half a gangster” to stay relevant and to avoid being defined by his quirks. Tony Soprano was half a suburban dad, and viewers’ identification with his regular-guy struggles allowed the show to transcend the cheap pleasures of melodrama.

Whenever Nucky turns violent or spars above his weight class with heavies like Michael Stuhlbarg’s Arnold Rothstein or Vincent Piazza’s “Lucky” Luciano, he’s outmatched, his talents for manipulation having deserted him. Stuhlbarg plays Rothstein as a refined sociopath who would let a man choke to death on a billiard ball just to win a bet. Against such cold-bloodedness, the soft touch of Buscemi’s Nucky doesn’t stand a chance.

Rothstein, the man who organized organized crime, has long been a fixture in the American consciousness. Many Jewish immigrants admired the man who both fixed the 1919 World Series and mentored the principals of Murder, Inc. The Forverts even referred to him as a “gentleman gambler.” But gentile America feared Rothstein as an incarnation of Henry Ford’s “international Jew” — a notion that appears in the pilot. “Boardwalk Empire” revives the repressed memory of the Jew as shtarker, or tough guy, and pop culture icon. Once upon a time in America, Jacob Glatshteyn could write a Yiddish poem about the gangster funeral of “Sheeny Mike,” who “dreamt up his kingdom.”

Legalized gambling has turned Nucky’s business model into regulated public policy, though three Atlantic City mayors in the casino era have been jailed or plead guilty to crimes ranging from extortion and fraud to financial irregularities. But what would really scandalize the ever-dapper Nucky are the polyester tuxedoes and clip-on ties of the boardwalk’s casino employees. The grandeur and audacity of Atlantic City are long gone. The queen is dead. She never even got a decent gangster’s funeral. HBO’s latest series tries to send her off in style, but the flowered wreaths that “Boardwalk Empire” sends smell none too fresh.

Adam Rovner is assistant professor of English and Jewish literature at the University of Denver. He is the third generation of his family to have worked on Atlantic City’s boardwalk.

Watch a trailer for “Boardwalk Empire” below:

A Boardwalk Empire of Their Own